Making its way to various film festivals in 2016, Red Christmas is a psychological splatter flick that comes to Blu-ray/DVD/VOD on October 17, 2017 thanks to Artsploitation Films. Just in time for the holiday season, this slaughterfest was written and directed by Australia’s Craig Anderson. Working on various Comedy projects including the television series Double the Fist, Anderson can write, direct, and produce. So what does he bring to the table with Red Christmas? 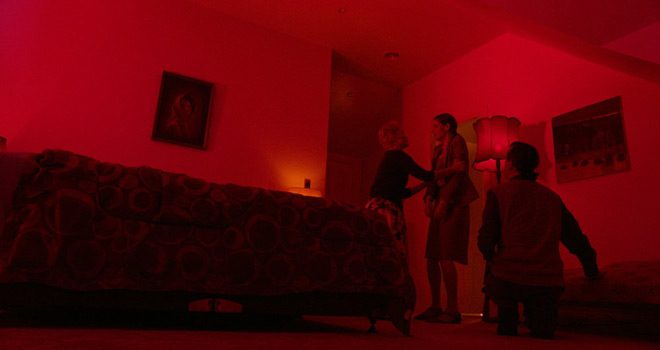 To start, he brings the lovely Dee Wallace (E.T. The Extra Terrestrial 1982, Cujo 1983), who also acts as a producer for Red Christmas. Wallace takes center stage as Diane, a middle class mother who is throwing one last Christmas bash in hopes to  begin her long awaited European vacation. Her disapproving children consist of Suzy (Sara Bishop: Activewear 2015, Wham Bam Thank You Ma’am 2016) and her peeper of a husband Peter (David Collins: The Upside Down Show 2006, Maya the Bee Movie 2014), then there is the very pregnant Ginny (Janis McGavin: Balls of Steel Australia 2011, The Elegant Gentleman’s Guide to Knife Fighting 2013) as well as her loving beau Scott (Bjorn Stewart: I’m Gonna Make It 2013, Black Comedy 2014), the theatrical brother Gerry (Gerard Odwyer: Be My Brother 2009, The Interviewer 2012) along with the youngest in the brood Hope (Deelia Meriel: Reflection 2015). Oh, let us not forget that there is an Uncle Joe played by Geoff Morrell (Ned Kelly 2003, Rogue 2007).

The siblings gather together for a long awaited Christmas celebration which could more than likely be their last… in the house that is. With their mother Diane hoping to sell the childhood home, tensions rise. Of course there is nothing really wrong with a few arguments between family, especially during the most stressful and depressing time of year… Christmas. So it is not surprise with a pregnant women and a depraved couple in the house that the household would be a less than peaceful place for the holidays. You throw in a stranger bent on revenge and justice, well, now you have yourself a splatter flick!

With the introduction to the lonely stranger limited in the beginning, the audience knows that the backstory will be revealed more through out the main plot of Red Christmas. They first meet the family during some pretty happy and festive spirits, except for one slight mishap. Know your allergies people. There is the typical opening scene of the traditional cooking of the Christmas dinner eggnog included. Yes, there might also be some Shakespeare thrown in there for good measure. With nothing out of the ordinary going on, the family decides to open presents until Christmas dinner is ready to eat, that is when things get really interesting. 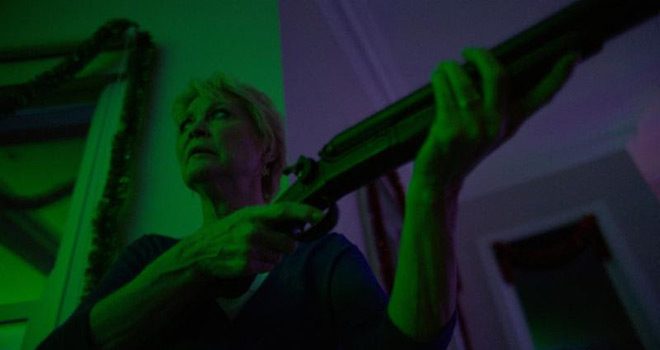 With a simple knock on the door, the family is ready for the most terrifying christmas of their lives. Do people really just let anyone into their houses anymore? Especially someone they have never met that cannot be seen by the person right in front of them and who is dressed only in mere rags? Probably not a whole lot, but this family does the “Holiday Kindness” thing and lets him right in. Anyone’s guess is that they have never seen Horror movies before.

The stranger, who goes by Cletus (Atlas Adams: Johnny Beretta 2015, Going Vego 2017), is a lonely soul looking for acceptance by his mother who abandoned him long ago. To be honest, “the abandonment” that Cletus experiences is more like that “what if” scenario. Completely hypothetical of course. “What if an abortion didn’t take?” and “What if the fetus lived through it?” Well, even if it sounds completely nuts, this is exactly what made Cletus go on his quest for the mother that “left” him long ago. In fact, there is a letter that Cletus pulls out of his robe, that he insists on reading, that indicates this throughout the details in the letter. Enough for the letter to anger Diane, her children and Joe throw him out of the house, leaving him in a distraught state to act violently to the members of the household.

With the news of miscarriage or abortion in the air, Ginny is left with no option but to question her mother, which leaves her in tears, and for a moment there is some dramatic monologue. With the tension in the house rising every second due to this stranger and stressful family get-together, one of the first to feel the wrath of the supposed fallen son is the youngest in the family with her death being a surprise and one of the most gruesome in the family. There is no suspense between discoveries of bodies. The killer has no problem having his victims being found by future trophies. With the family running around looking for cover they easily become victims for the killer. 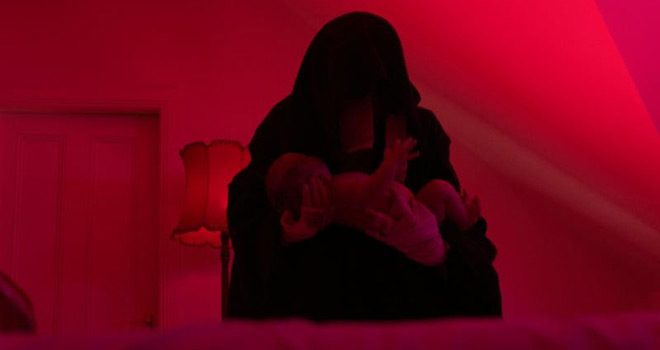 With the family splitting up, they become easy targets for Cletus, who does not show any mercy or any feeling at all when taking out his would be family. No one is able to escape his grasp, even though some of Cletus’ crimes are not that horrendous or vile. They are done towards a loving family during magical times, so it is seen as pretty dark. His motives are what make this movie a little more heavy as well.

Morals are a big issue with Red Christmas. Do most people have the morals to get them through life without having to deal with people like Cletus? Would most people want to get revenge on people that harmed regardless of the consequences? Don’t worry, it is not completely filled with philosophical questions, it just makes the audience question it while the crimes are being committed.

Though most of viewers want a perfect ending in a movie, it seldom happens. That said, there is nothing perfect about the ending of Red Christmas. Will it leave it open for a sequel? Who knows. So, does Red Christmas have a bunch of cliché Horror movie sequences? What do you think, it is a Horror movie called Red Christmas based around an abortion! Does the acting suck? Nope, it does not, it is actually quite good through the film. For these reasons, CrypticRock gives Red Christmas 4 out of 5 stars. 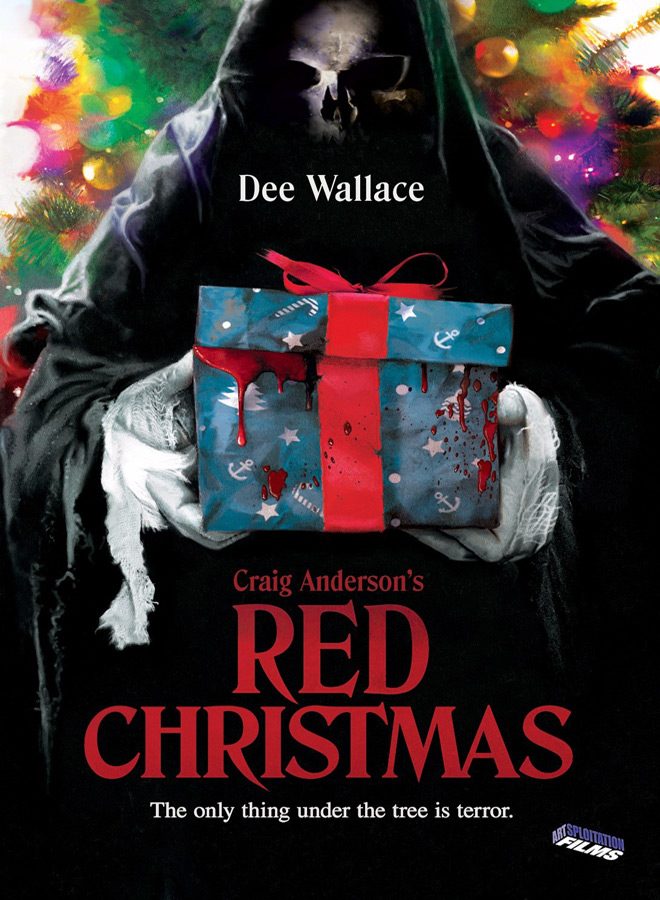