Reflecting on 2006’s The Omen A Decade Later

On June 6, 2006 at 6:06:06AM, symbolically representing the number 666, the biblical Number of the Beast, Irish Director John Moore (Behind Enemy Lines 2001, Max Payne 2008) unveiled his remake of the 1976 American apocalyptic Horror classic The Omen. A film that did moderately well in the theaters, 2006’s The Omen recorded the highest opening Tuesday box office gross in US history, earning more than an estimated $12,000,000.  Met by mixed critical reception, many questioned, “Why remake the classic?” That said, anyone who watched 1976’s The Omen, nothing really new is offered outside of some updated effects in Moore’s 2006 edition. In fact, the plot follows the original’s actions almost frame by frame, only adding in some surreal dream sequences. Nonetheless, the 21st century edition of The Omen is well-worth reflecting on as it celebrates its 10th anniversary. 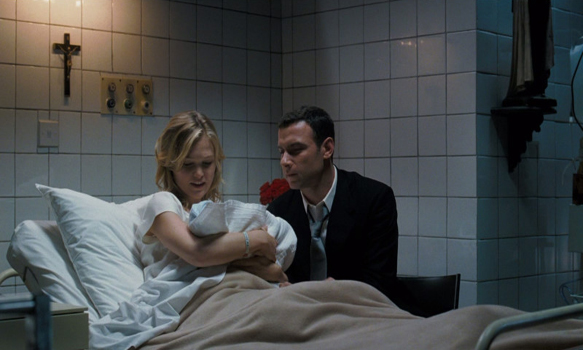 Opening in Vatican City, Rome, Italy, where priests interpret troubling signs, biblical text is presented alongside contemporary news images to support the idea that the Antichrist is born. Meanwhile, politician Robert Thorn (Liev Schreiber: Scream 1996, The 5th Wave 2016) rushes to his laboring wife Katherine’s (Julia Stiles: 10 Things I Hate About You 1999, Jason Bourne 2016) bedside. Father Spiletto (Giovanni Lombardo Radice: Cannibal Apocalypse 1980, Cannibal Ferox 1981), the man in charge at the hospital, explains complications led to the death of the Thorn’s baby. As an alternative, he suggests the Thorns adopt a child whose mother died giving birth, explaining the children were born at the same time. However, to keep Mrs. Thorn from grieving her lost child, the priest suggests presenting the child as her own biological baby. Home videos show the child growing. Robert Thorn is offered a position in England under Mr. Stephens. The family is elated until a strange explosion killed Mr. Stephens. Thorn takes the lead position, moving the family to a big house in England.

Two years later, the Thorns host a lavish birthday party for their son, Damien, on their property’s grounds. Photographers, including Keith Jennings (David Thewlis: Harry Potter series, The Boy In The Striped Pajamas 2008), snap shots until Damien’s nanny yells to the boy, “This is all for you, Damien!” from atop the estate’s roof. She hung herself before the assembled. Meanwhile, the unaffected child waves to a mysterious black dog with whom the nanny communicated before her suicide. Tabloids and reporters, including Jennings, swamp Robert Thorn’s office. The original Damien from 1976 makes a cameo as a reporter. Father Brennan (Pete Postlethwaite: The Last of the Mohicans 1992, Inception 2010), a priest from Rome, insists Thorn should accept Jesus, explaining of Thorn’s son, “He’ll kill until everything that’s yours is his.” He calls Damien the Devil’s son and claims to have been present at the birth. Damien’s mother was a jackal.

Kate Thorn’s search for a new nanny frustrates her until Mrs. Baylock (Mia Farrow: Rosemary’s Baby 1968, Arthur and the Invisibles 2006) takes the job. Mrs. Baylock interferes with family plans, including suggesting Damien’s attendance at a ceremony be ill-advised. On the way, the driver approaches a church. As Damien passes beneath the church’s shadow and sees the eyes of saintly statues, he has a fit, attacking his mother until Mr. Thorn tells the driver to head home. Kate Thorn confides to her husband her concern that something was “not right” about Damien before she drifts to sleep and a disturbing dream. When Mr. Thorn checks on the boy, he finds the nanny adopted a rottweiler as a good watchdog of which Damien was fond of. Thorn insisted Mrs. Baylock get rid of the animal. She does not. 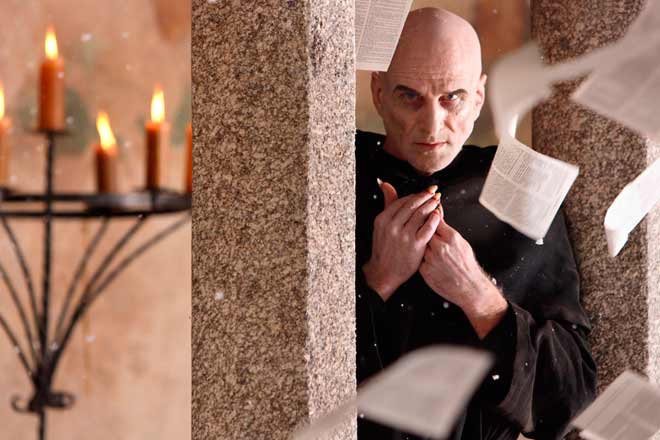 At a theatrical Thorn attends, Father Brennan pleads for a visit. They meet during a rainstorm beneath a bridge where Father Brennan explains Kate is pregnant and in grave danger. He recites a poem about Armageddon and tells where Thorn can meet up with the only man who knows how to kill the antichrist. Thorn tells Brennan to leave his family alone and parts ways. Brennan rushes to a church, but the way is locked. Lightning split the skies when a spike from the church spire and broken glass falls on Father Brennan, killing him.

Thorn visits Kate’s therapist who confirms Kate’s pregnancy, but she wants an abortion. She feels something is wrong with Damien and believes he’s not really her child. Kate’s dreams continue, and her fear mounts. She thinks Damien might be evil and is not her own. Meanwhile, in his room, the nanny feeds bloody bits to Damien before the child knocks his mother over the railing to a life-threatening drop. Her pregnancy ended, but she survived. She pleads with her husband, “Don’t let him kill me.”

Develops film from his photographic excursions with the Thorns, Jennings finds strange camera anomalies. He shows his findings to Thorn, including images of Jennings’ reflection showing his life in peril. The two travel to Italy to investigate. The hospital where Damien was born burnt down right after the Thorns left. They find a fire-scarred Father Spiletto at a monastery and search the graves of Damien’s mother, who is indeed a Jackal, and the Thorn’s son’s skeleton, which reveals the infant was murdered. Thorn and Jennings survive an attack by a pack of black dogs.

They seek Bugenhagen, the man Father Brennan advised could help Thorn solve his problem. Bugenhagen (Michael Gambon: The Book of Eli 2010, Harry Potter series) gives Thorn seven sacred knives and tells him to take Damien to consecrated ground to murder the lad. Thorn refuses, and Bugenhagen advises he look for a birthmark, 666 – the number of the beast, on Damien to prove his supernatural nature. Jennings retrieves the knives, but when he stands, he is decapitated with a small spurt of gore. 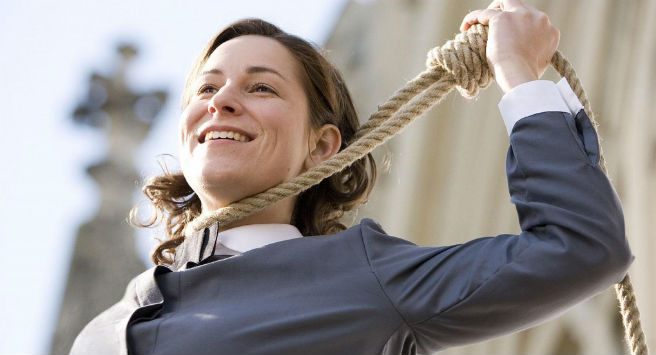 While Thorn investigates, Damien and Mrs. Baylock bring flowers to Mrs. Thorn in the hospital. The boy holds the guard in thrall with his stare while the nanny murders the mom. Thorn returns home where he traps his son’s attacking rottweiler guard dog and finds the damning birthmark beneath the child’s thick black hair. He scoops up the kid, fights off the crazed nanny, and, ignoring the pursuing police, thrusts his screaming child at the foot of a cathedral’s crucifix. Before he can kill the boy, though, police shoot Thorn. The pope dies the day Thorn is buried. Damien attends the funeral, holding hands with the President of the United States. For the final scene, Damien turns to face the camera and begins to smile.

The Omen from 2006 is so like the original film, any surprises or scares one would hope to find are anticipated. The only exception to this rule is Kate Thorn’s dreams. Thus, to some, a retrospective on Moore’s The Omen is tainted if they have already adsorbed Richard Donner’s 1976 version. If the audience did not see the original, the assessment might differ. The argument some made in regards to the 2006 edition is that filming was slick in parts, plodding in others.

Nonetheless, the filmmakers added clever little things, like pentagrams on the side of a refreshment cart and the use of the color red as a premonition. In addition, the acting was pretty good, especially the performances of Ms. Stiles, Ms. Farrow, and Seamus Davey-Fitzpatrick, who won a “creepiest kid” award from Fangoria magazine. Amusing enough, it is said Davey-Fitzpatrick was never told that his character was supposed to be the son of the Devil during filming. The crew felt he was too young to understand. Keeping things nostalgic, Harvey Stephens, who portrayed Damien in 1976’s The Omen, returns in the 2006 edition as a tabloid reporter.

Released at a time where PG-13 Horror films were the norm, thankfully Moore insisted on an R-rating to help keep The Omen’s effect potent. Released on the 30th anniversary of the original, 2006’s The Omen invited a new generation into this disturbing story. A story that even inspired a television series, entitled Damien, which aired in the spring of 2016 on A&E, but was cancelled after one season. As late as April of 2016, reports came down that 20th Century Fox was developing a prequel to 2006’s The Omen with Antonio Campos as the director. To some a footnote in the rampage of remakes that have been released over the past decade, Moore’s 2006 The Omen really has no flaws even the purest of fans could complain about. That said, a decade later, it still keeps the respect of the Horror community and is a fitting part of The Omen history. 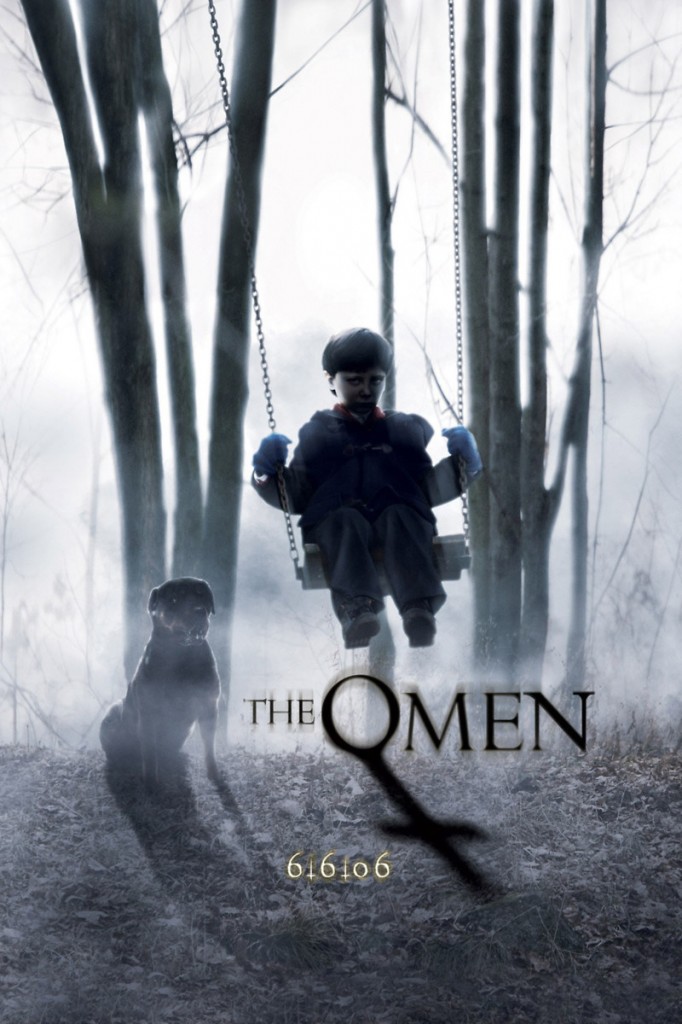 Purchase The Omen on DVD on Amazon