All That Remains – Madness (Album Review) 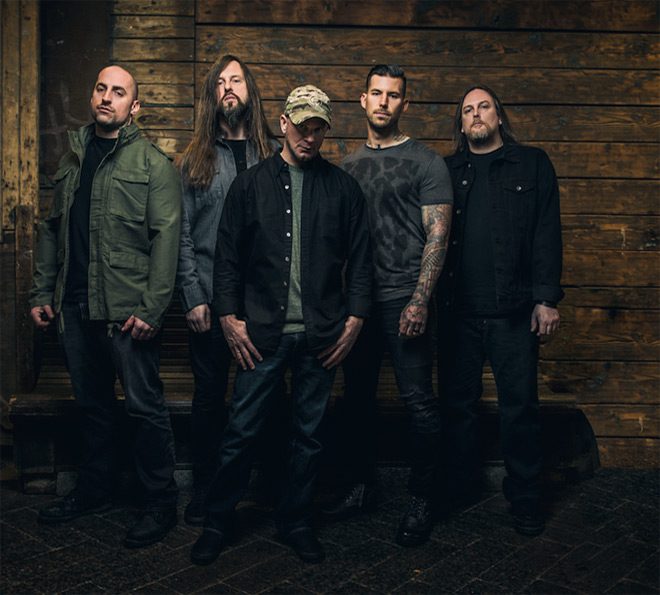 Hailing from Springfield, Massachusetts, All That Remains have been one of the hardest working Metal bands over the past twenty years. Originally the lead vocalist of Metal titans Shadows Fall, Phil Labonte exited that band over those proverbial “musical differences” and, like a phoenix, arose from the ashes with All That Remains. Their debut album, Behind Silence and Solitude, was released in March 2002. Six more albums would follow throughout their career, ranging from 2004’s This Darkened Heart to 2015’s The Order of Things.

A band which have etched their name in the hearts of Metal lovers everywhere, All That Remains provided the lead song on 2006’s Saw III soundtrack and was featured in Guitar Hero II, as well as on the iPhone OS game Tap Tap Revenge 2. These are, of course, just a sampling of the band’s many and varied accolades. A band known for their prolific touring, throughout the past two decades, All That Remains have performed on the Vans Warped Tour, Ozzfest, the Rockstar Mayhem Festival, at Wacken Open Air in Germany, and have shared stages with everyone from Hatebreed and The Devil Wears Prada to Story of the Year and Five Finger Death Punch.

Like an unstoppable freight train, on April 28th via Razor & Tie Records, the band will release their eighth full-length studio album, Madness. This album marks the band’s first collaboration with Grammy Award-Winning Producer Howard Benson, noted for his work with musical heavyweights ranging as far afield as Sepultura and Kelly Clarkson. On their latest, All That Remains – Phil Labonte (Vocals), Oli Herbert (Guitar), Mike Martin (Guitar), Aaron Patrick (Bass), and Jason Costa (Drums) – have produced a truly eclectic collection of thirteen songs that might seem a bit schizophrenic at times, but Labonte is prepared to meet any criticism head-on. “Our goal has always been to write songs that we like,” Vocalist Labonte notes. “All That Remains has seen a lot of criticism about the songs that we’ve written and what people think we’re supposed to do. We started as a very underground Death Metal kind of band, we’ve since moved away from that and have never apologized for it. The music we’ve written has been reflective of that and I think the lyrics, the ideas, have always been reflective of that as well.”

Madness begins balls out, with one of the album’s heaviest tracks, “Safe House.” Punishing, thrashing bass and drums propel this biting track, where Labonte taunts, “Welcome to my safe house, do you feel safe now?” Asynchronous keyboards create atmospherics that are worthy of the theme song for the next Rob Zombie Horror flick, and the whole thing is capped off beautifully with a dueling guitar solo that will make any Metal fan toss up some horns.

Album namesake, “Madness,” is a heavy bass groover that is an obvious choice for a single. While the lyrics, like history, are somewhat repetitive and vague, thanks to the album’s cover – which depicts a burning Capitol Building in Washington, D.C. – it does not take a Mensa member to figure out that this madness, at least, is likely political in nature. Similar in sonics, the immensely full sound of “Nothing I Can Do” is a clear stand-out with pulsating bass and drums, layered vocal harmonies and an infectious chorus. This is Metalcore with clear Thrash influences; harmonious, devilishly Metal.

Then All That Remains toss out a serious curveball. While “If I’m Honest” sounds like something Alt Country meets Christian Rock, or worse, yet Creed, it is not an altogether bad track, just unexpected. In short, this addictive song is a testament to All That Remains’ abilities to go to extremes of the eclectic nature.

They return to the regularly scheduled program of pulverizing bass, shotgun drum work, and an infectious, fully atmospheric sound on the anthemic “Halo.” “You don’t get to say what I’m made of,” Labonte proclaims on this song about living your own life and never allowing others to dictate your next move. It is a deliciously addictive anthem for the individual who dances to the beat of their own heart! On a similar note, “You’re loud, I’m louder,” Labonte proclaims triumphantly on the aptly-titled “Louder;” a fun track about not allowing anything to overpower who you are.

“Don’t put down the phone,” Labonte begs in the emotional “River City,” which starts out acoustic and kicks in big time with layered harmonies and that pulsating assault of rhythm section Patrick and Costa. It is one of the more tender moments of Madness, followed by the hard-hitting growls and catchy melody of “Open Grave.” A return to the tender side of All That Remains, “Far From Home” is an Alt Country/Christian Rock ode to the ones back at home, who are always close to Labonte’s endlessly touring heart. It is a bit cheesy but disturbingly catchy, all the same.

More heavy basslines and growling vocals follow with “Trust And Believe,” but are somehow overshadowed by the bizarre, acoustic – complete with strings and bells! – of “Back To You.” If Madness seems a bit schizophrenic, you are not alone. To prove they are truly mad, All That Remains segues into one of the album’s heaviest tracks, “Never Sorry,” complete with synth programming and growls galore. Just when you are fully convinced that this band are completely insane in all the very best ways, they reach the album’s epic finale, a cover of “The Thunder Rolls.” Whether he is Garth Brooks or alter-ego Chris Gaines, it is doubtful that the man behind the original track would have ever imagined such a retelling. Soaring guitar work opens this stellar cover that shows off, once again, that when Labonte wants to sing, the man can truly sing!

Madness is a somewhat schizophrenic dichotomy: equal parts pulsating, crushing bass and drums that echo the siren’s song of Thrash Metal with infectious choruses, catchy melodies, and atmospheric sounds that oft whisper of those Christian Rock folk. All That Remains are adamant that they are not, in fact, anything Christian whatsoever, so let’s just call it unexpected, radio-friendly Hard Rock; in their very best moments of Madness, they are the dream tourmates for the phenomenal Skillet. For these reasons, CrypticRock gives All That Remains’ Madness 4 of 5 stars.

The band will be hitting the road in support of Madness, see AllThatRemainsOnline.com for details.