Remembering Taylor Negron – A Man of Many Talents 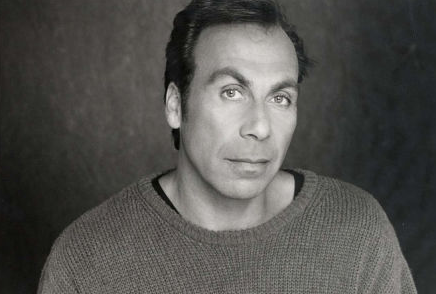 With the troupe of talented comedians and actors in Hollywood, it is not uncommon for one to pass away without getting as much recognition as those deemed more successful like the recently deceased Robin Williams. Taylor Negron was one such individual recognized by his fans and colleagues as a multi-versed Actor, Writer, Comedian, Painter, and Playwright. Born Brad Stephen Negron on August 1, 1957 in Glendale, California, Negron had a knack for entertaining from a young age. Cousin of original Three Dog Night vocalist Chuck Negron, Taylor proved he was another talent in the family’s bloodline. A unique personality both on and off the screen, Negron has always been easily recognized by the mainstream after his impressive journey through film, television, and so much more. 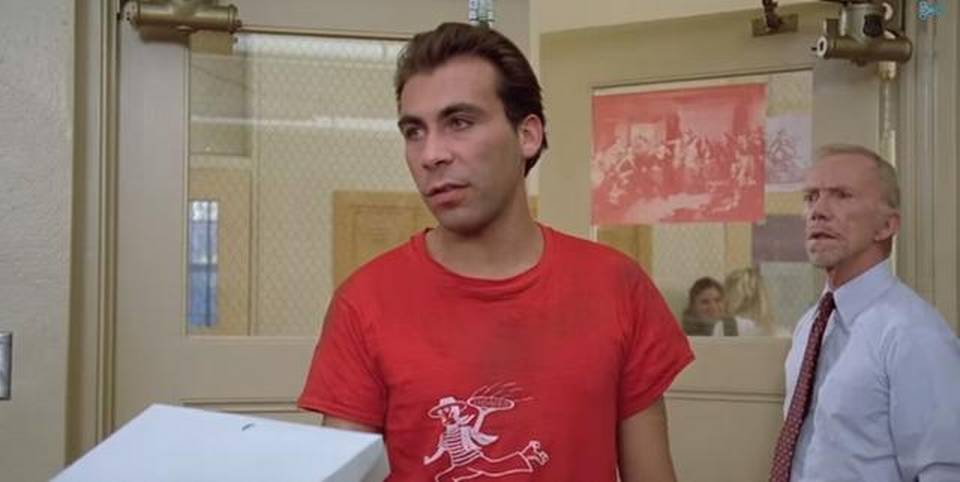 Negron began his diverse career while still a teenager in High School. When kids were worrying about dating and zits, Negron was performing stand-up routines. After one such performance at the Comedy Store in Los Angeles, he began extending his talents by venturing into Hollywood. His first television appearance was the popular TV Show The Dating Game during the 1970s, which he appeared in nine times. Thereafter, he branched into being an extra in a number of successful films. To help increase his chances of finding work, Negron completed a work/study program at the The Actor’s Studio and worked as legendary Lee Strasberg’s (acting teacher, actor/director) assistant, which provided him with a great start to his on screen career. This job lead him to work as Lucille Ball’s (I Love Lucy) intern when he was only nineteen. A rare life experience for such a young man, Ball passed the knowledge she had learnt from Buster Keaton (Pajama Party 1965, Beach Blanket Bingo 1965) to Negron, which left a lasting impression. In fact, in May of 2014, during an interview Negron did for KCET, he stated, “I learned from Lucy that you never get what you really want and you have to be flexible.” This certainly stuck with Negron as invaluable advice that assisted him in his lengthy career. 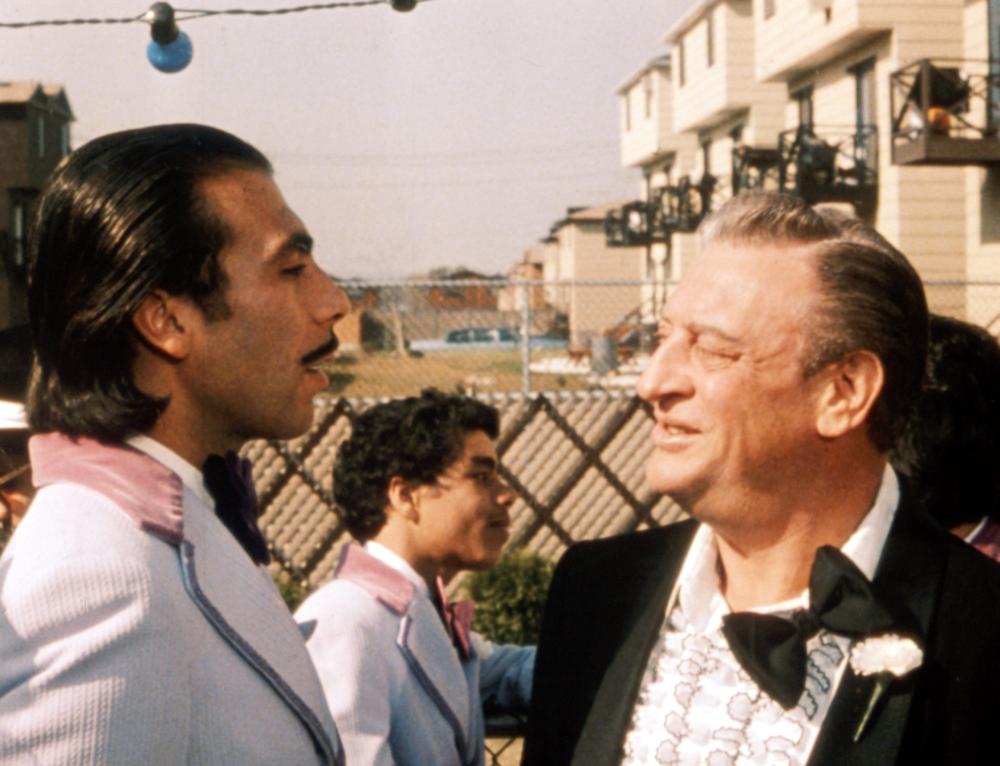 In 1982 Negron’s debut full-length film was in the successful soap opera Young Doctors in Love, leading into a number of memorable parts in films throughout the decade. Though he played many characters, his most identifiable movie role was perhaps as the pizza delivery man in 1982 decade defining film, Fast Times at Ridgemont High, a role he reprises in Amy Herckerling’s 2012 movie Vamps. Some of his other defining roles were as Julio, son-in-law of iconic Rodney Dangerfield in 1983 Comedy Easy Money and as Fausto Squiriniszu in the 1991 off-the-wall Comedy Nothing But Trouble. Coincidentally, establishing himself in variety of iconic television shows and movies, Negron continued his stand-up comedy routines, and his entertainment career went from strength to strength. For several years, Negron maintained steady appearances on the Los Angeles comedy scene. He also made many appearances at the Un-Cabaret and performed with his colleagues in their own special projects, including Melinda Hill’s 2012-13 web series Romantic Encounters, from which garnered Negron a Best Actor award. 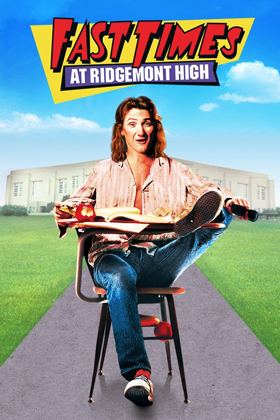 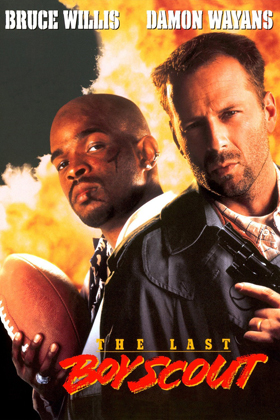 To challenge himself and his craft, he dramatically altered his appearance to star as bad guy Milo, alongside Bruce Willis and Damon Wayans, in the 1991 cult classic The Last Boy Scout. Though he was surprised to be selected by Tony Scott (Top Gun 1986, Man on Fire 2004) and Joel Silver (Die Hard 1988, The Matrix 1999), he jumped at the part, and absorbed himself in the role. The character was incongruent with Negron’s easy going nature, but he enjoyed taking a walk on the dark side and experiencing a different role than the comedic ones he usually played. Continuing to work hard, he delved into appearing in more television shows again starring in series such as Seinfeld, My Wife and Kids (where he appeared again with Damon Wayans), ER, Party of Five, and even Friends. Proving his abilities did not stop at just entertaining adults, Negron even partook in a number of children’s television series and movies such as Stuart Little (1999), That’s so Raven, Wizards of Waverly Place, and The Fresh Prince of Bel Air.

He did not just limit himself to acting and stand-up, the multi-talented Negron wrote the Unbearable Lightness of Being Taylor Negron – A Fusion of Story and Song. Teaming up by Opera Director David Schweitzer, it debuted in the Green Room at the Edinburgh Comedy Festival to critical praise. In fact, a number of plays and Comedy essays penned by Negron have been published in anthologies, or been shown on stage. There seemed to be nothing Negron was not good at, and he was even a passionate, talented painter. Seemingly always busy, Negron dedicated some of his time to serve on the board of LACMA, while effortlessly managing to hold solo exhibitions of his own work at galleries. For those particular pieces, he used a recent harsh Winter in New York City as inspiration. 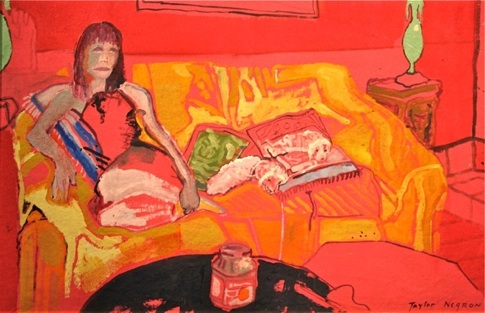 Loved and highly respected by many, his abilities were not unseen and to credit his alma mater, ULCA asked Negron to teach their first Comedy courses ever. His loss reverberated throughout the entertainment industry and his many fans when he passed quietly away with his family by his side, on January 10, 2015, in Los Angeles California, after a long battle with liver cancer. There was an immediate outpouring on a variety of social media, as people worldwide felt the loss of the legendary Taylor Negron. One more talented person taken too soon, but one more star to shine in the night sky for eternity. 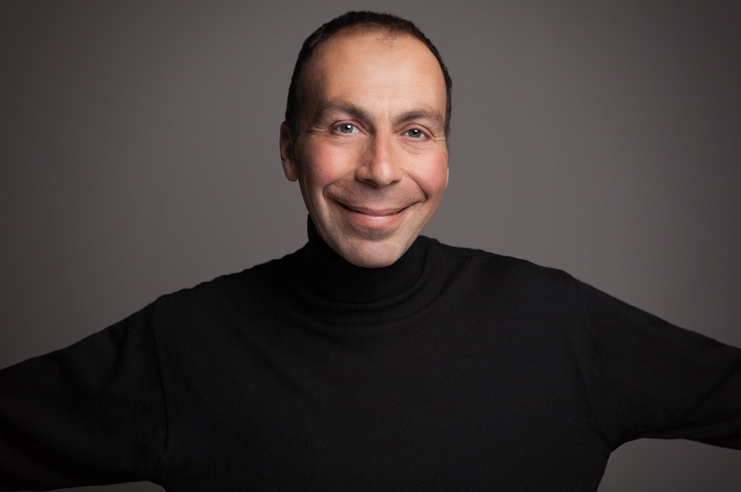 Taylor Negron’s warm personality garnished affection by many. Read below some thoughts from fellow Comedians/Actors about him:

“Taylor was one of a kind for sure. We were peers and worked together not only in the comedy clubs, but auditioned together frequently over most of the last thirty years! We did a few projects together, mostly indie films, and I enjoyed being interviewed by Taylor some years ago on a radio show he had. He was always a candid, funny, and warm soul. (Often revealing much about himself unsolicited!) Still, as little as I felt I knew him, he always seemed to know what I was up to. (Even after not seeing each other for long periods of time.) He also loved to catch me up on our mutual friends and peers. (Just showed you how much he took interest to those around him.) I’ll miss Taylor not only as an artist and friend, but also as an inspiring force in a very important LA Pop culture that took place in the comic community (comic family really) since the early mid ’80s. I am glad I was a part of it and I am privileged to have experienced Taylor Negron as an important part of that! He will be missed by a lot of us.”  – John Kassir, actor/comedian (Tales from the Crypt series)

“He was a real human and a deep soul. He is missed by many.”  – Kelly Carlin, actress/comedian

“When I was a young comic, I opened for him many times and I would sit and listen to his brilliant comedy completely enamoured by his wit and style. He was just the most perfect man. I saved up a bunch of money and I bought him a blue crystal which he said he would saved to this day. I loved him so much and my heart is truly broken.” – Margaret Cho, actress/comedian

“I have been a fan of Taylor’s since I saw him do stand up on MTV in the late 80’s, and since then have watched him become a uniquely-talented comedic force on both stage and screen.  A terrible loss.  R.I.P. funny man.”  – Don Jamieson, stand-up comedian/ TV Host (That Metal Show)

“Obviously if you watched any films in the ’80s I think he was in everything. Most importantly, I know it was a small part, but in Fast Times in Ridgemount High, he was the pizza man. That is one of the most memorable scenes in a movie. He was very underrated as a Comic, except among other Comics. He was a really funny guy.” – Anthony Cumia,  Radio host

“One of a kind… One of the kindest…..loved every moment I knew him. Only wish I knew him many moments and many years more …all love ” – Lin Shaye actress (Insidious series)

“”Taylor wasn’t a movie star. He was a star. Sometimes he acted in movies. Taylor Negron made eye contact and he made contact. When he left the world he left it a lot funnier and more colorful. Taylor had a reverence and attention that made people feel special and seen, the same quality and demeanor that his longtime friend Robin Williams had. He treated people as equals and peers. To quote Patti Smith quoting Robert Mapplethorpe in her amazing book Just Kids: “We never had any children…our work was our children.” Taylor lived an exciting, extraordinary life — because he chose to. He had stuff to write about because he traveled, he lived in beautiful homes, he had dinner parties, he had wild affairs. He was eccentric and eclectic. He was strange magic. He was a piece of work and a work of art. He was a character and he had true character. There was never any other option for him.” – Melinda Hill comedian, read her full tribute