Remember when video games would come out after the release of a film as a way to earn more revenue? Who could forget games such as Friday the 13th, A Nightmare on Elm Street, and Predator, among others. In many ways, video games are used to enhance an overall story in a way that would not really work on film – adding new characters, new plot points, and more of an overall background of the world. Then Resident Evil came around, ignored all the rules, and did everything in reverse. Sure there were other movies based off video games including 1993’s Super Mario Bros., 1994’s Double Dragon, and 1995’s Mortal Kombat, but none seem to hold the weight as Resident Evil. That is exactly why, 15 years later, Resident Evil is still worth talking about. 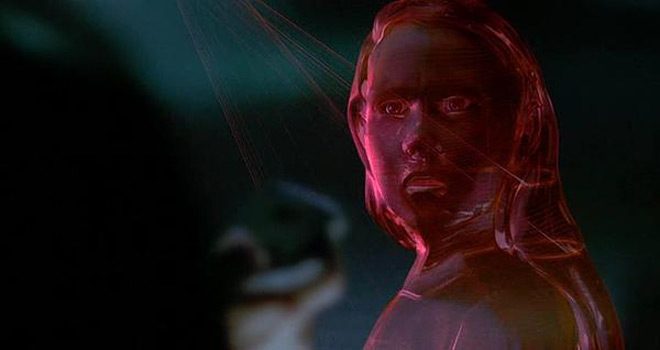 Based off the successful Capcom video game series which launched in 1996, after years of being a hot survival Horror game on Playstation, Nintendo, Microsoft Windows, and Sega, on March 15th of 2002, Resident Evil became a real life motion picture. Distributed via Screen Gem and Constantin Film, Resident Evil would not only push the game series to new heights, it would also shed more light onto the Horror genre that was growing more popular by the day.

Written and directed by Paul W. S. Anderson (AVP: Alien vs. Predator, 2004, Death Race 2008), with a budget of an estimated 33 million dollars, Resident Evil starts off with the leak of a dangerous virus in the the Umbrella’s underground facility known as The Hive. The virus, or the T-Virus, spreads through the hive by the air vents.

At this point, the supercomputer that controls every aspect of The Hive, goes into containment mode, which inadvertently kills most of the scientists working in The Hive. After all the chaos, we meet our heroine, Alice, played by the incredible Milla Jovovich (The Fifth Element 1997, The Three Musketeers 2011), passes out in the shower of a mansion that is above The Hive. She wakes up to find that she has no recollection of where she is or what happened prior to waking up. 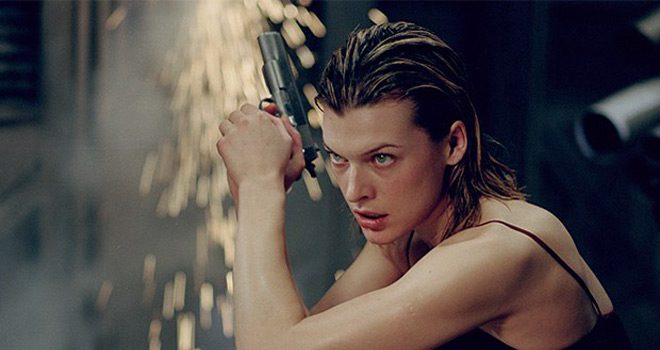 As Alice wonders around the mansion, members of a SWAT team jump through windows towards her. James, or “One,” the leader, played by Colin Salmon (The World Is Not Enough 1999, London Has Fallen 2016) explains he and his team, which includes the always badass Michelle Rodriguez (The Fast and the Furious 2001, Machete Kills 2013), playing Rain. Eventually the three and the other members of the SWAT team make their way down to The Hive from the mansion. One explains that the team was sent to destroy The Red Queen because it killed all 500 scientists that lived down in The Hive because of the virus.

After a tense time of trying to get the lights up and running, they are all attacked by the first group of zombies. It is at this moment where the film takes off and does not stop until the end. From there, we meet another character, named Spence, played by James Purefoy (A Knight’s Tale 2001, The Following series). With so many kick ass characters, it would not be fair to say that this film ends on a happy note, most of the characters die, but, their deaths mean something.

A lot of those characters really resonated with the audience and there was a real sense of dread when they do die. Ending with Alice and Matt played by Eric Mabius (The Crow: Salvation 2000, Amazing 2013) getting captured by a team of Umbrella scientists after they deactivate The Red Queen, the scientists end up reactivating The Red Queen and separating Matt and Alice. Alice then wakes up in the middle of a hospital room, she walks out of the building after finding her bearings and sees that the entire city had been destroyed. Ending on a massive cliffhanger, it is also an extremely iconic scene in the series. 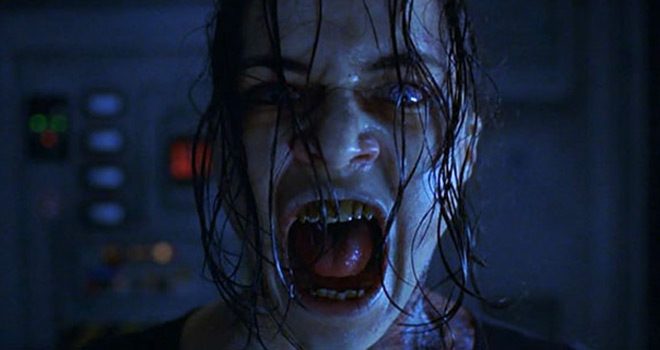 Films based off video games are incredibly hard to pull off. As mentioned, before Resident Evil, not many films based off video games made it out alive, with the exception being 1995’s Mortal Kombat released via New Line Cinema, a film which also happened to be directed by Paul W.S. Anderson. All this said, of all video game movie nightmares, Resident Evil seems to be the only film series that had any longevity in the cinematic world spawning five more sequels, with the last being 2016’s Resident Evil: The Final Chapter. In addition, it helped the video game’s shelf life and merchandising phenomena. It also does not hurt that the film’s main character is the lovely Jovovich. Had they chosen a different actress to launch the film series, things may have turned out a lot differently.

Even still, pretty faces only go so far. A film needs a strong story and Resident Evil excelled at taking the formula of what made the games truly great while sprinkled with a ton of action, as well as sticking in some new and really memorable characters. This formula created a whole new story and really breathed in a fresh new take on the mythos. It also helps that Anderson stuck with the franchise following the first film. In fact, the films that Anderson could not direct, 2004’s Resident Evil: Apocalypse and 2007’s Resident Evil: Extinction, he still wrote the screenplay. Consistence is important, and one can see how much love and care he put into series. Starting with Resident Evil, it shows in every frame, every outrageous sequence, and every stunt.

Beyond video game film status, it is important to not overlook the Horror film aspect. While to a Horror film purist Resident Evil may fall more along the lines of an Action flick, there is no denying that the zombie angle really spread like wildfire in the Horror genre. Look no further than the endless zombie related flicks that followed and the massively popular AMC The Walking Dead series. Which leaves real zombie fans wondering, why would the godfather of the zombie, Mr. George A. Romero, not get on the action of Resident Evil? Well, Romero was originally on board, in fact, he wrote a script but it was disapproved by Capcom. Just as well for the Horror icon as he went on to revive his legendary Living Dead series starting with 2005’s Land of the Dead. 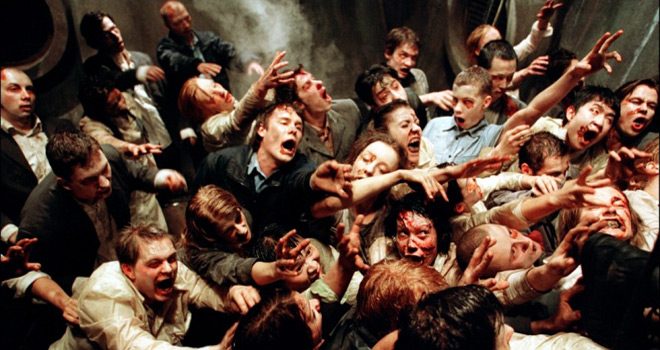 Keeping legacy of Resident Evil going, 2017 is shaped up to be a big year for multimedia franchise, both for film and video games. For one, 15 years after the cinematic Resident Evil was born, it looks like Alice’s story has wrapped up with Resident Evil: The Final Chapter. Secondly, the video game franchise made a highly acclaimed return to its survival Horror roots with Resident Evil 7: Biohazard, which was released in January 24th. Lastly, the third entry of the more faithful animated film series, Resident Evil: Vendetta, will be hitting theaters in Japan May 27th, with a summer US theatrical release, which will be released via Sony Pictures.

Overall, 2002’s Resident Evil proves that a movie based on a video game can be fun and successful. It is not the best portrayal of cinema, nor is it meant to be, but it has survived for 15 years and probably will continue to do so well into the foreseeable future. 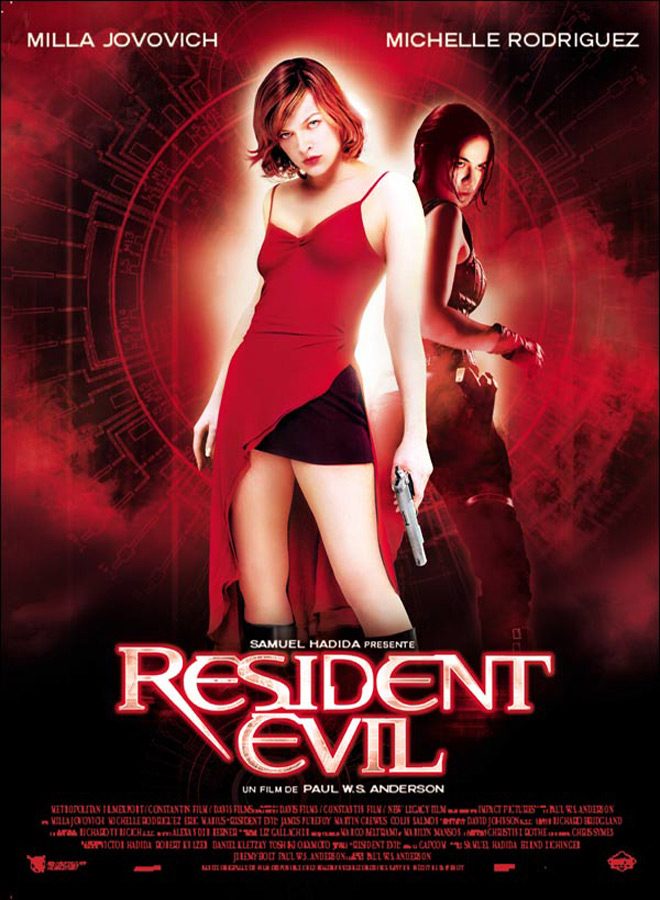