A second helping from the supergroup Revolution Saints is a dream come true for Frontiers Music s.r.l. boss Serafino Perugino who envisioned the concept of the band, finally bringing them together for their eponymous debut in 2015. Now they have bonded, have more of an idea what they are each capable of, and as a result, they are stronger, slicker, more accomplished as well as polished. In fact, they can see heaven reflected in their songwriting.

Who exactly are Revolution Saints? They are Bassist/Vocalist Jack Blades (Night Ranger, Damn Yankees), Drummer/Vocalist Deen Castronovo (ex-Journey and Bad English), and Guitarist Doug Aldrich (The Dead Daisies, ex-Whitesnake, DIO). Pretty sweet right? Together they re-unite with Producer Alessandro Del Vecchio to bring fans their latest album, Light in the Dark. Set for release on October 13, 2017, Blades shares vocal lead with the impressive Castronovo who sings out from behind the drumkit, and while guitar hero Aldrich was on tour for much of the recording process, Blades also provided his LA studios for some of the work, while the rest was completed at Del Vecchio’s studios in Italy.

Now, for those still new to Revolution Saints, they are probably wondering what they sound like. Simple, the music they create is melodic Rock in an adult vein. It is sophisticated, cultured, sensitive, and sublime, to call it AOR would be an insult. It has passion, supreme musicianship and huge power-harmonies rising above stunning time signatures, intense guitar riffs and meaty bass lines.

Eleven tracks in total on the standard edition, the album begins with the title-track, “Light In The Dark,” a classic ’80s Rock giant with simmering vocals, anthemic guitars, and a glittering shimmer of hope. It channels Journey, Toto, and Reo Speedwagon while the twin vocals are instantly charismatic, effortlessly blending together to complement one another, giving it more power and impact. With a hymn-like quality, “Freedom” follows, an air of positivity and electrifying drum beats. This punctuates the atmospheric feel of the song, which breaks to a spoken verse from the bible as a climax. Then, revving up the tempo, the audience hits the road with “Ride On,” a track about chasing your dreams and following your heart.

Soon the album takes a more sensitive and emotional turn with “I Wouldn’t Change A Thing,” a sweet piano-led ballad about loss, love, and dealing with life without regret. It is poignant and should connect with those suffering from grief or heartbreak while it builds nicely, taking you from the gloom to hope. This is before “Don’t Surrender” alludes to some classic songs including Journey’s “Don’t Stop Believin’.” A typical ’80s style power ballad, it is uplifting and eternally youthful while holding onto the golden view of life. Offering a rallying cry, impressively motivational and optimistic, “Take You Down” is a polite rebel yell. While some bands epitomise raucous rebellion, Revolution Saints offer a more mature stance that is less angry, more peaceful, but still with a strong message.

More gritty, “The Storm Inside” has a harder core, but with a common theme of finding the inner fight within is strongly evident in the lyrics. This is while the music is drenched in beefy guitar riffs, matching Aldrich’s stunning guitar work throughout the rest of the album. Another piano ballad, an emotional slow-burner that reaches out to your heart, “Can’t Run Away From Love” is sweet and tender. It is like being wrapped in warm fresh towels because it soothes, calms, and makes you feel better about life.

Turning to a quicker pace, “Running On The Edge” features soaring guitars, pounding drums, and more husky vocals that plead for the strength. A song about fighting personal demons, finding the inner strength and not giving in, “Another Chance” could relate to so many things. That said, its message is one of courage, and fits very well with the theme of the previous track. Finally, “Falling Apart” is the last offering on the standard album. Dealing with the nature of love and how it can take over every aspect of your life, both in an obsessive, passionate manner, it is more how a teenager might imagine it to be rather than realistic expectations.

If this was not enough, the deluxe edition of Light in the Dark also features some live bonus tracks including “Back On My Trail,” “Turn Back Time,” “Here Forever,” and “Locked Out of Paradise.” Live renditions from Frontiers Rock Festival, the Bonus DVD includes a Documentary of the making of the album and videos for “Light In The Dark” and “I Wouldn’t Change A Thing,” giving you more bang for your buck.

If you like ’80s Rock, dreams of love everlasting and stunning guitar solos, then Revolution Saints’ Light in the Dark will be perfect. It is faultless in the execution of the songs and each performance is world class. It is a proper grown-up Rock album, not quite anthemic, but certainly full of hope and promise. Perugino knew what he was doing when he put these three together, because it works so well! For that reason, CrypticRock gives Light in the Dark 4.5 out of 5 stars. 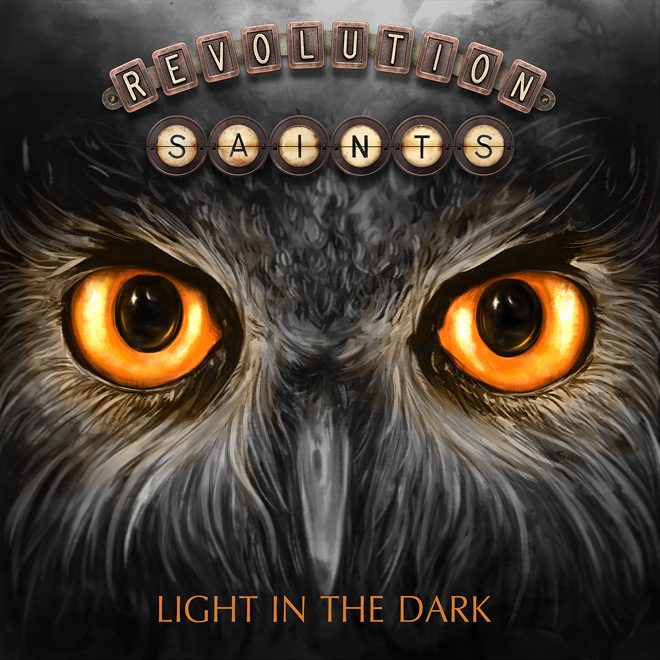 Purchase Light in the Dark: