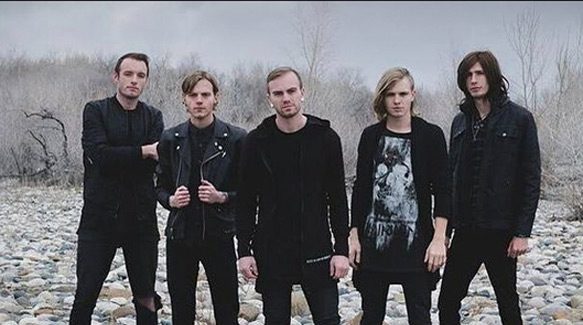 Cody, Wyoming Metal band Righteous Vendetta have a history of blending styles and techniques to create their own unique dynamic. The band’s dedication and ferocity comes through clearly on stage, and on their records, it is no different. Comprised of Vocalist Ryan Hayes, Guitarists Justin Olmstead and Justin Smith, Bassist Riley Haynie, and Drummer Zack Goggins, the band has made their bones on delivering energetic blends of cleans and screams paired with well-timed beats and rhythmic pacing to create the sound that fans have come to expect.

Signing to Another Century Records in June of 2016, the band is kicking 2017 off with fresh tour dates with Flaw and a new album. Making their Century Media full-length debut, on March 17th, the men of Righteous Vendetta will be releasing Cursed, their first full-length album in four years since their 2013 release, The Fire Inside.

Cursed marks a return the band’s delving into the heavier side of their sound again. While they have always had intense breakdowns and the benefit of Hayes’ flexible vocals, the songs on Cursed enjoy a richer exploration of these elements. Pair this with the more melodic and heady moments on the record, and you have a diverse palate of music that engages and ensnares the listener.

The opening track, “Doomed,” is an excellent example of the aforementioned kind of dichotomy at work, with special attention to be paid to the clean, and almost existential heart of the chorus. Title track “Cursed” harkens back to the Metal of the early 2000s with its soaring choruses, eerie whispers, cool rush in the undercurrent, and multi-layered breakdown. It rushes smoothly and rallies with triumph while still defiant as Hayes sings, “I want to listen, but your whispers are poison.”

As the album progresses, the songs begin to shift and the intensity is more controlled and deliberate. The guys are not looking to be crazy and explosive just for show, they want to make a statement. Sometimes it is not what one can cram into a song or an album, but what they leave out that can make all the different. The subtlety and nuance of some songs can be more attractive than an assault of sound. One great example of this is the song “A Way Out.” In this song, there is a balance between heavy bass and explosive energy and the clean vocals and subtlety of the guitar. The small guitar solo in this track may be short and sweet, but it is because of these facts that it should be appreciated that much more when heard.

“War” brings around the deliberate and measured harsh vocals and gutturals that flex and fold over one another creating several layers of hard-hitting vocals. The organization of this track is both intriguing and engaging. It commands respect and will likely be one song that will kick up a mosh pit easily at a live show. The depth of the percussion and grit in Hayes’ growl are what grind this song throughout. A surprising addition to Cursed is a re-recording of the title track from their 2014 EP, Defiance. This new rendition of “Defiance” is heavier and much more demanding than its predecessor. If there was ever a song meant to help you get out of bed in the morning, “Defiance” is the anthem you have been looking for.

Switching things up near the end of the album, “Halfway” slows things down a bit, but maintains a sweeping heaviness that is more emotional than instrumental. It is a song about love, longing, and seeking solace in another despite the impact. Hayes laments, “I can’t make it to Heaven alone, meet me halfway.” The song paints a picture of regret and the need for forgiveness in the quest for redemption. It is followed by the coolness of “Become,” which is melodic and spirited despite delving into moments of animosity. The effects on the vocals adds a chilling vibrato and echo that whirls throughout the track. Sonically, it is refreshing and spirited with prominent percussion and soft keys in the background of the track.

Closing out Cursed is “Strangers” with its intensified rushes of bass and percussion. Its an otherwise effervescent track that lifts and swirls in the ears. The vocal melody plays beautifully against the music and curls up like smoke in a windless room. It is intriguing and enchanting in its progression, lifts, and depths. Mostly, it is a refreshing, invigorating, and strangely hopeful exit for the album, despite face-value lyrical interpretation. It leaves the listener with the hope that the “strangers” of the song have the potential for a future and a chance to be acquainted once more, as the song implies only temporary estrangement with the line:“We’re strangers, for now.”

Righteous Vendetta has returned after three years away with a new arsenal of songs that run the gamut from vicious to valiant and inspiring. Their evolution into a new balance between the heavier end of their sound and the smooth, clean melodies that comprise many of their hooks gives the band its best chance at even-handedness. Old fans will definitely notice the tendency towards the heavy, but hopefully be content with the balance of harmonies and well-layered melodies to enjoy the record as a whole. CrypticRock gives Cursed 4 out of 5 stars. 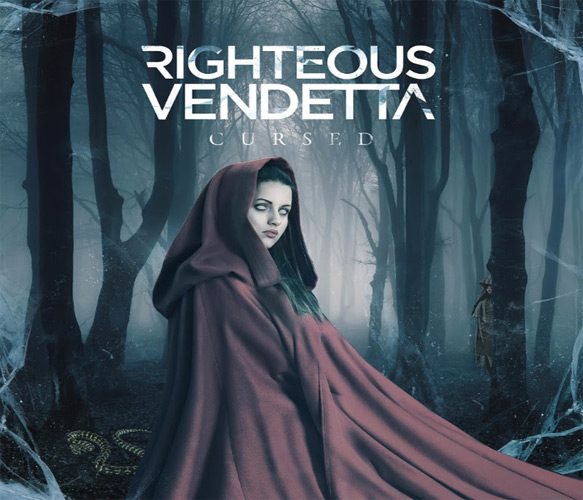