After a twelve year hiatus, the long awaited third film in the American Ring series has arrived at last. Twelve years is a long time for a gap in any series, and the new film, simply called Rings, wisely attempts to strike a balance between evolving the story and keeping the elements that made the previous films successful, with mixed results depending on viewer’s expectations. Hitting theaters on February 3, 2017 via Paramount Pictures, Rings delivers much of the same: characters frantically trying to evade the curse, a narrative that plays out like a murder mystery, and a well built climax that the audience likely will not see coming. 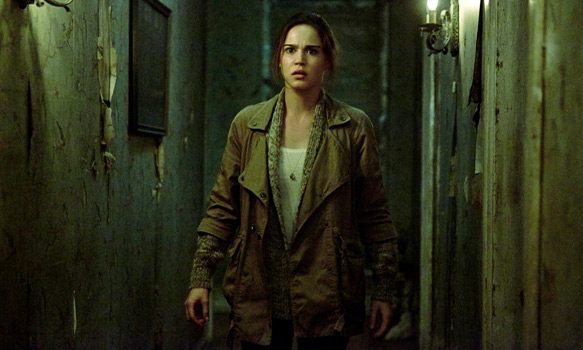 Matilda Lutz as Julia in RINGS by Paramount Pictures

Directed by F. Javier Gutierrez (Brazil 2002, Before the Fall 2008), Rings opens with a solid scene in which two passengers on a plane are at the 11th hour of the ring curse, hoping that the curse surely could not reach them thousands of feet above the earth. Longtime fans know how wrong they are; there is nothing that can save you from Samara. So go viewers’ two new friends, along with everyone else on the plane in the subsequent crash. This scene is effective because it shows the curse in an environment viewers have not seen before, and it shows the audience how much collateral damage can occur when the time is upon a victim, reinforcing that isolation is the best route to take if someone is any decent kind of person.

Next, the timeline jumps two years and we are briefly introduced to the film’s most compelling character, College Biology Professor Gabriel, played by John Galecki (Big Bang theory TV series, Roseanne TV series), who is shopping around for an old VCR, and happens to find the one previously owned by the aforementioned crash victims. The cursed tape is of course inside and Gabriel is marked, but he will prove to be much more clever than one might assume. His cunning instincts in dealing with the curse serve not just to save as many people as possible, but to explore the deepest questions humans have about existence – is this proof of life after death?

The audience will have to willingly suspend their disbelief for this because Holt looks to be pushing 30 years old but is playing a college freshman. Holt leaves and he and Julia try to keep in contact using Skype, but he eventually disappears. Fearing the worst, this sets Julia into action and she drives up to Holt’s college herself to find out what happened to her beloved. This is the real starting point of the story, and it feels a little late to happen here. 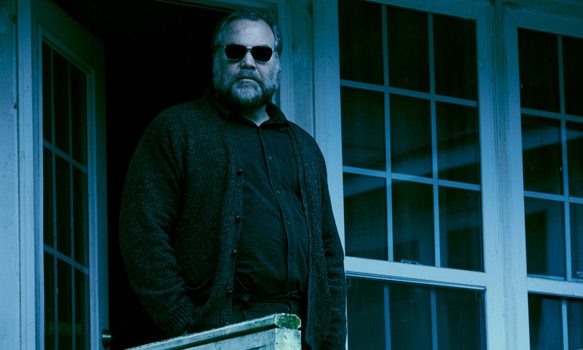 Julia meets Gabriel, and it turns out that he knows a lot about the curse, about Samara, and how to keep her from killing anyone. It is here where the professor tells Julia of his desire to make the greatest discovery in all of human history, concrete proof of a living soul, or life after death. Not only that, but he has established a network of students who watch the tape and then find a “tail,” or someone to pass the curse on to until it is their turn to pass, and so on.

Holt’s tail does not show and so Julia watches the tape to save him, and the rest of the film is where things may feel derivative. The couple goes off to a secluded, rural area to find out more of the backstory of Samara when she was alive, only this time it is her birth family instead of her adopted family like in the first film.

The narrative and pacing feel nearly identical to that of The Ring, only this time it does not have as strong a script or actors with the chops of former lead Naomi Watts. The younger cast make a good effort, but have a problem connecting with the audience somewhat. The acting department is helped in the second half of the film with the surprise appearance of Vincent D’Onofrio (Full Metal Jacket 1987, The Cell 2000), who plays a blind man who knows much more about Samara’s story than he first leads on.

Also worth a mention is Bonnie Morgan (Minority Report 2002, The Devil Inside 2012), who plays Samara. One of the critical things about getting Samara’s creepiness to work is her body movements, and Morgan, a professional contortionist, does an excellent job at playing her unnatural and inhuman movement to max efficiency. She is certainly the best of the three actresses to take up the role thus far. 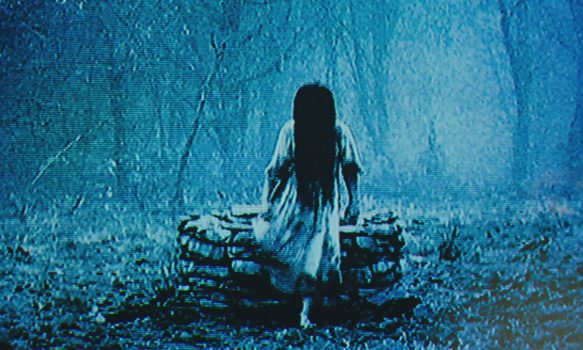 Bonnie Morgan as Samara in the film RINGS by Paramount Picture

Throughout the second half of Rings, fans will inevitably compare it to 2002’s The Ring simply because it all feels too similar. The audience is treated to flashes of disjointed, seemingly random pictures from the tape, a race against time as the curse countdown is ticking away, and the end goal is to find Samara’s bones in order to break the curse, which is exactly what Watt’s character had to do in the first movie. This is unfortunately a missed shot, and it hurts the final product not just because of the repeating events, but because of lost opportunities.

The storyline of Gabriel studying the tape and trying to extract evidence for the proof of an afterlife seems to be ripe for the picking, but the script went in another direction, leaving the existential material by the wayside in favor of grounding things in the familiar.

It is a challenging task to take a movie like The Ring and expand it into a franchise, as it is perfectly suited to be a one-off film, and Rings takes the right shots in many places, but misses a bit more than it hits. Rings ultimately falls victim to the too common problems of a subpar script and not enough risk being taken to move the story in the right direction, but there are still things for fans to enjoy.

Overall Rings is able to deliver the right atmosphere and keeps the core story intact, but the journey of the first film is much more effective than this one. What fans are left with is just a passable entry in the series, better than 2005’s The Ring Two, but it will likely leaving many lamenting what could have been. CrypticRock.com gives Rings 3 out of 5 stars. 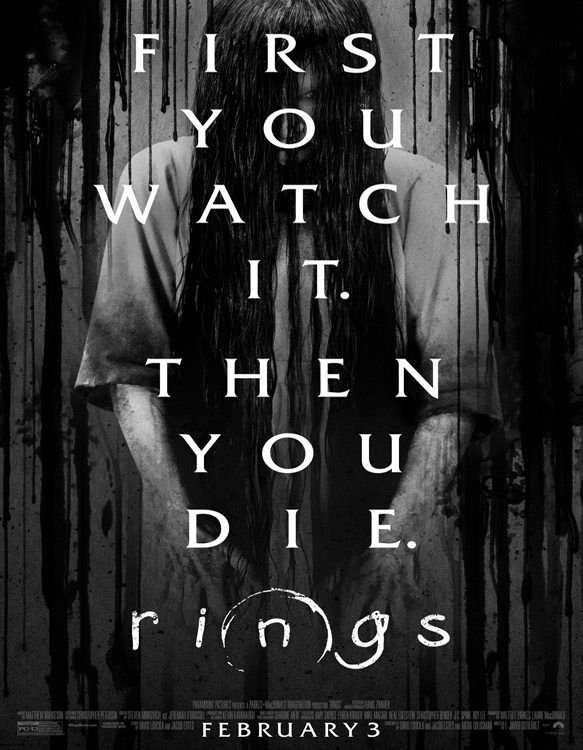 The Reckoning (Movie Review)
Like the in-depth, diverse coverage of Cryptic Rock? Help us in support to keep the magazine going strong for years to come with a small donation.