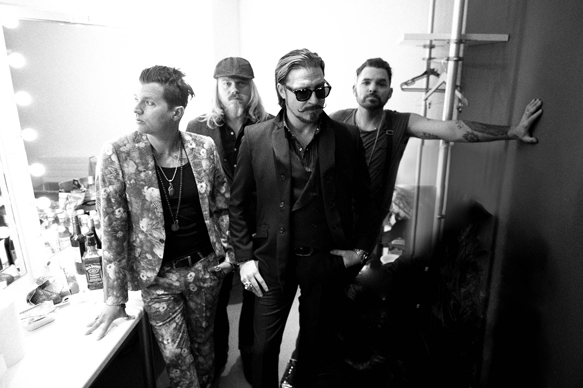 Neo-Classic rockers Rival Sons has made some pretty big waves in the music industry in the seven years since their formation in 2009. They were labeled as a band to watch after touring with greats such as Aerosmith, AC/DC, Deep Purple, Kid Rock, Judas Priest, Sammy Hagar, and Alice Cooper; rightly so. These guys bring the shudder and bang back to Rock-n-Roll, letting loose on their instruments with a pent up aggression not seen since the heavy squall of bands like Deep Purple, Led Zepplin, Black Sabbath, and Thin Lizzy. Rival Sons is comprised of founder Scott Holiday on guitar, Jay Buchanan on vocals, Michael Miley on drums, and Dave Beste on bass; a group of men bubbling with talent and passion for their music. Their newest album, titled Hollow Bones, was released on June 10, 2016, nearly two years to the day of their last record. CrypticRock had named Rival Sons’ Great Western Valkyrie as one of the Best Albums of 2014 and was also nominated for Album of the Year 2014 by Classic Rock Magazine. Does Hollow Bones measure up?

The album starts with “Hollow Bones, Pt. 1,” the record’s debut single and the first song in a two part series. Beste’s bass grinds the sleep from the eyes while Holiday floods the system with caffeinated vibrato guitar, setting the perfect stage for Buchanan to soothe the nerves with a plaintive lament, making for a delicious musical contradiction. The emotional impact of “Tied Up” drags the listener in with its bar-none Rock vibe that brings back memories of 2011’s “Pressure & Time.” An electric burring kicks off “Thundering Voices,” a Psychedelic, needling track that gives way to a calmer, almost spiritual lyrical chorus. Holiday does not merely play his guitar in this song – he throttles it to the ground. “Baby Boy” is a hard-edged, drum-centric track while “Pretty Face” pulls things back a bit, offering up a lighter, yet surprisingly grungier song with howling riffs that bleed Soundgarden’s “Fell On Black Days.”

Buchanan’s gentle, haunting vocals in the Bluesy “Fade Out” are the yin to the gouging bridges and slamming kitwork’s yang. This song drains the listener both emotionally and audibly, leaving them content, yet satisfied, like after a good and hearty cry. The band’s previous release from Record Store Day, a fervent, powerful cover of Humble Pie’s song “Black Coffee,” fits naturally in with the rest of Hollow Bones. The soul-stirring lyrics about the struggles of the working class, originally written back in 1948, still hit a chord with listeners today – combining that with Buchanan’s raw, pleading vocals, Holiday’s fuzzy, wailing, Hendrix-esque guitar and Beste’s chugging bass – make this track an instant, timeless classic. The second part of the album’s first single, “Hollow Bones, Pt. 2,” is more of a slow burn, but the ride to the climax is heavy and rock hard. The two parts to this track fit perfectly together, although the latter may just be the better of the two. The album closes with “All That I Want,” a gorgeous tear-jerker that builds itself up as it goes, starting with Buchanan’s warbling voice before adding Eamon McLaughlin’s haunting violins and Todd E. Ogren-Brooks on keys to create a simple, sweet, plaintive song as emotionally driven as Great Western Valkyrie’s “Where I’ve Been.”

The boys of Rival Sons have once again created a fantastic Rock-n-Roll album that Classic Rockers, as well as newly minted genre lovers, will devour. While not quite as transcendent as Great Western Valkyrie, Hollow Bones holds its own, giving the listener some one-of-a-kind, sophisticated tracks while still holding true to the band’s original sound. While this album is a bit cleaner than the last, the familiar fuzzy guitars, spastic drums, pounding bass, and wailing, pleading vocals still resound throughout the nine song set. Like previous albums, Hollow Bones was produced by two time Grammy winner David Cobb, and his influence, along with the talents of Holiday, Beste, Buchanan, and Miley, shine on. Check them out as they open for Black Sabbath this summer on the Black Sabbath Farewell Tour. CrypticRock gives Hollow Bones 4.5 out of 5 stars. 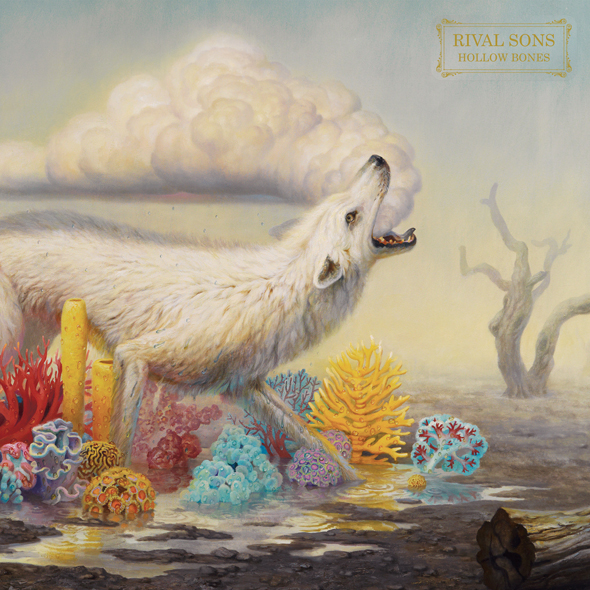