With elements of Phone Booth (2002), Wind Chill (2007), and Road Kill (2010), new release Roadside by Image Entertainment in conjunction with Image Entertainment  and Southern Fried Films still paves its own creepy road to hell. Written and directed by Eric England, who is responsible for such films as Madison County (2011), Contracted (2013), and Chilling Visions: 5 Senses of Fear (2013), once again tells a spooky tale of roadside terror. Filmed in Virginia, the events take place entirely at night time. The cinematography by Dan Hertzog (Black Tiger: Hunter Hunted 2014, Toronto 2013) expertly capitalizes on the isolation and bitter deadly weather on the eve of Christmas. Although production was originally completed in 2013, the film was released on  April 14, 2015. Set in modern day, and told by observation point of view, Roadside focuses its story on a young couple, Mindy (Katie Stegeman: Madison County 2011, Contracted 2013) and her husband Dan (Ace Marrero: Madison County 2011, Piloto 2014), as they travel on their way to Dan’s parents house for Christmas.

Storms are brewing, and the weather is getting worse. The tension in the car is already high, and the bad weather is only adding to Mandy and Dan’s stress. Mandy is only a month away from having their first child, and she was already what would be considered high maintenance. The presence of their golden labrador Buddy only adds to matters. From the outset it is clear the couple are not entirely happily married. Usually that would be entirely their business, but when they travel down one stretch of road they encounter a truck ahead of them that is driving erratically. Dan tries to overtake the vehicle but the other driver begins to speed up. A frustrating and dangerous few minutes follow, until fortunately the driver of the truck loses interest and speeds off. Rattled, Dan and Mindy continue on their trip stopping at a gas station.

Dan is warned by the store clerk (Jack E. Curenton: Super 35 2012, Natural Born Filmmakers 2015) that bad weather is coming, and Park Ranger Mills (Lionel D. Carson: Broken Toy series, Contracted 2013) confirms they will need snow chains, which Dan dismisses. Dan reports the dangerous driver to Mills, who then tells Dan about the dangerous truck driver. He confirms Dan’s fears that he has issues, but is not generally dangerous. Not overly concerned, Dan and Mindy head off again, but it is not long before they encounter beyond their worst nightmares. What happens to them next is not only terrifying but unexplainable, and keeps the viewer glued to their seats. Scene by scene, Dan and Mindy are drawn closer to violence and death, if not their own, than those who they encounter. Held hostage by an unseen assailant, with the force of his voice initially alone (Brad Douglas: Lee’s Ghost 2012), Dan and Mindy must think and act quickly to save themselves. What will happen to Dan and Mindy at Christmas time, in the middle of the night, on a lonely dark stretch of road?

England takes an intimate situation between a troubled married couple, plays on their feelings of safety and comfort, then rips apart the fragility of their relationship by extreme measures, and leaves them to their own devices. The result is the original and exhilarating Roadside. While the overall concept might not be original, England truly makes it his own, daring to go that bit further than those before him; not just pushing the envelope, but tearing it into little pieces. Well acted, with a small but capable cast, and seamless special effects that blend well with a sound plot, the film follows an even pace all the way through to the nail biting end with no lagging moments. Certainly open for a sequel, and while not all questions are answered, the ones that are answered are truly scary. There appears to be underlying themes of the importance of honesty, being a good person, and that sometimes it is too late for sorry. A must watch for Horror and Thriller fans looking for something more. CrypticRock gives Roadside 5 out of 5 stars. 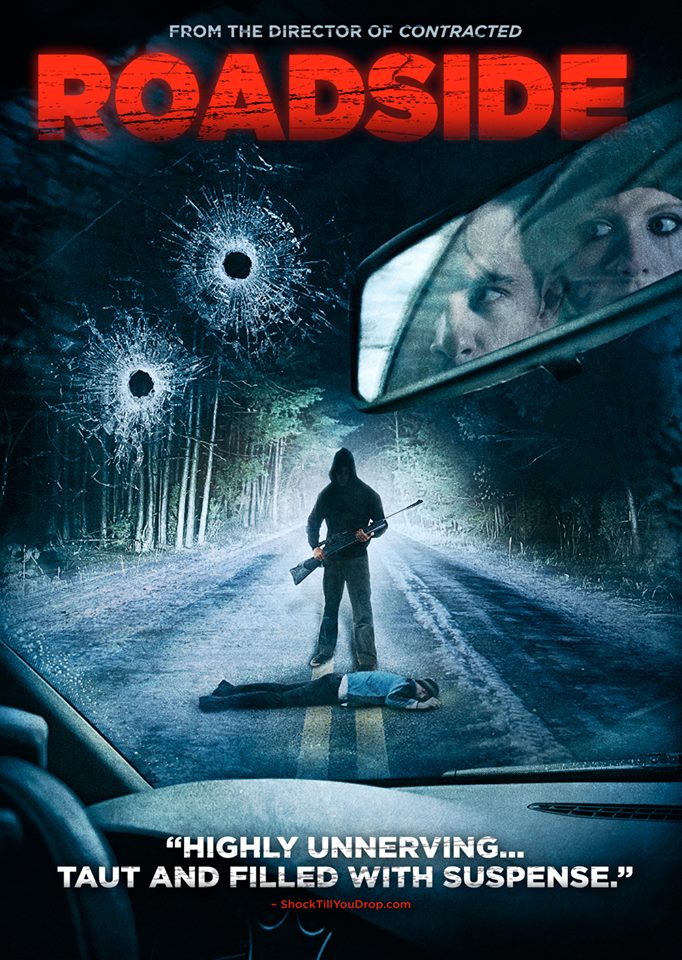 Purchase Roadside on DVD on Amazon