The original Science Fiction Action award winning film RoboCop hardly needs an introduction. It is one of the greatest movies ever made, see it. Alright, perhaps that is a bit of a stretch, but in the world of cinema RoboCop was in fact considered one of the best movies of 1987 to hit the silver screen following its release on Friday, July 17th via Orion Pictures. 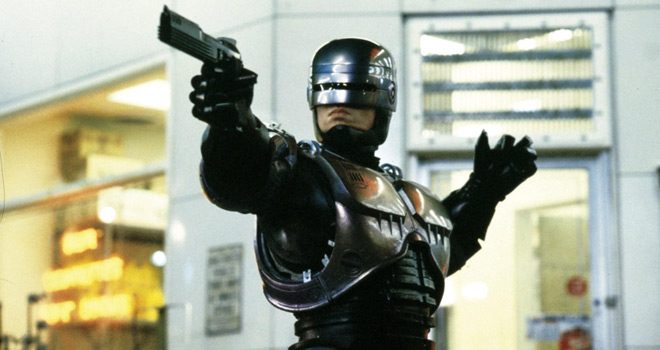 Part of the Cyberpunk is a subgenre of Science Fiction, much like 1982’s Blade Runner, since RoboCop’s release thirty years ago, many have regarded the film as a Western of sorts. On the other hand, others have deemed it to be subconsciously religious, and there are some who claim the movie has an important political message decorating its science-fictional façade.

Maybe RoboCop is all of those things; but, while hundreds of thousands of different opinions and comparisons exist in the world today, there is one more thing about RoboCop that is closest to the truth. A truth so truthful it will set the truth free. The truth is: RoboCop is a well-crafted Soap Opera lying beneath a well-crafted Action film that perfectly utilizes Science-Fiction.

“A Soap Opera?!” Yes, a Soap Opera. Disagree? Thinking back to the days when daytime shows General Hospital, Guiding Light, and Ryan’s Hope ruled the time-slots of morning-to-late-afternoon television, and how each episode contained such epic scenes that would carry happy viewers around every character and their glamorous on-screen sets. Well, RoboCop is like a Soap Opera, and for many reasons.

One example is how some of the scenes in the movie are filmed in one long take. During these takes, the cameras filming each of those scenes fluidly move along the action taking place without missing a beat, capturing multiple characters having multiple conversations with one another against a very lively backdrop. These long-takes emit sensationally realistic interactions between each of the characters, gifting moviegoers nifty on-screen character development and fast-paced plot-reveal. This aspect also helps quicken—but not rush—the story along. 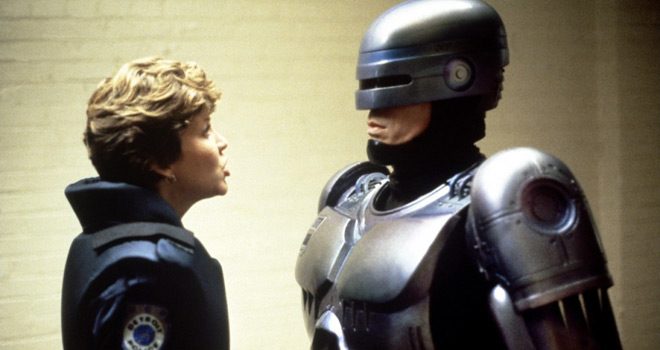 Another example is how there are so many different cause-and-effect scenarios happening within the story of RoboCop, and how each one of them involves and envelopes the entire cast of characters, which gives way to many different melodramatic situations to take place. One thing always leads to another in this cleverly-written Sci-Fi/Soap, starting with protagonist Alex Murphy (Peter Weller: Of Unknown Origin 1983, Naked Lunch 1991) a recently-transferred police officer being gunned down at the hands of a ruthless gang of criminals, then is left for dead. This occurrence also becomes a Cause.

During this time, a mega corporation called Omni Consumer Products (OCP), which owns the Detroit police department and plans to rebuild the city, has been dabbling in robotics in its spare time. OCP dabbles a little further when the body of an expired Alex Murphy is used to be transformed into a cyborg that dons an armored robo-suit, carries a Berretta 93R firearm, and is ready to fight crime. What happens, though, when a human-turned-cyborg starts to have memory flashbacks of a past once lived, is what becomes the Effect. Now, there is plenty more Cause and Effect happening throughout this little Robopera, and plenty more Soap lathering each and every second of its running-time—but writing it all out would spoil the surprise.

If not for how well the entire story was put together, and how amazingly a job every single actor, crew member, and stunt person did to sell this incredible movie, there would be no RoboCop. This could especially be said about the impressive special effects and set-designs used to color every scene of this film, which, in turn, adds more to the life already existing within it. No matter what comparisons are made, the SFX in this movie are quite an amazing sight to see. No CGI-laced film today will ever hold an erupting volcano to the labor-intensive skill of the handmade practical effects that went into RoboCop. But, as goes the old saying : “Seeing, is believing.” 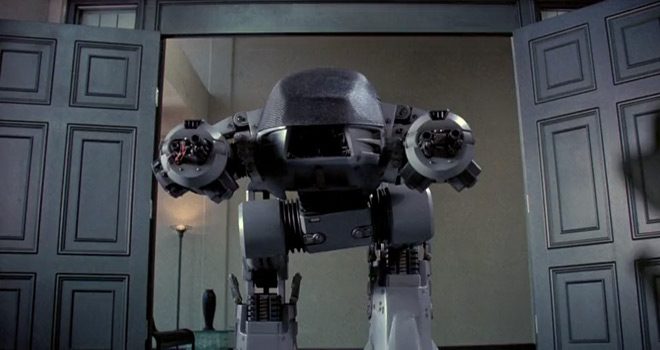 All this said, RoboCop’s Director Paul Verhoeven (Basic Instinct 1992, Starship Troopers 1997) did a splendid job bringing to life a Science Fiction tale of a fallen soldier given a second chance to help save a city heavily wrapped in turmoil. He perfectly crafted a one-hundred-minute episode of an R-rated Sci-Fi/Action Soap Opera, that—for the sake of a laugh—could have been titled “One More Life To Live As A RoboCop.”

The heart and soul of Robocop is due to a script from writers Edward Neumeier (Starship Troopers 1997) and Michael Miner (Deadly Weapon 1989), and is quite an impressive and lasting mark in each of their careers. Unfortunately, though, and for some strange reason, a needless, unimpressive remake was made in the year 2014, which, incidentally…was also co-written by Neumeier and Miner.

That fact aside, the original RoboCop is violent, dark in tone, and a very funny movie. It is a Soap Opera hiding under a Sci-Fi/Action movie full of snappy dialogue, colorful characters, and array of memorable scenes. When it arrived in theaters, it toppled the competition within the box-office Top Ten, and continued to do so for a couple of weeks straight, accumulating well over fifty-three million U.S. robo-bux, before heading onto VHS and Laserdisc formats in 1988.

Like any box-office smash, a follow-up—or two—is inevitable. This is proved true, some few years later, in the form of sequels called RoboCop 2 in 1990 and Robocop 3 in 1993—exhibits A and B. The interesting thing about these “just okay”-sequels is that both had really cool directors involved. The person tasked to direct Robocop 2 was Irvin Kershner, better known for directing 1980’s The Empire Strikes Back and 1983’s Never Say Never Again. Meanwhile, 1986’s Night of the Creeps and 1987’s Monster Squad Creator Fred Dekker was planted in the Director’s Chair for RoboCop 3. Neither of these sequels contained as much energy, nor any of the charm that encased 1987’s RoboCop, but are equally respected among fans of the latter for the effort in trying to continue the legacy of their juggernaut older sibling.

If there is a fear out there that an R-rated movie about a cyborg police officer trying to rid crime and wrongdoing from a city in turmoil as not being PG-enough—rejoice!—for there was a cartoon show based off the idea of RoboCop that aired on television during the last three months of the year 1988. This show portrayed Officer Alex Murphy-a.k.a Robocop – in a tamer, much calmer version of Verhoeven’s world through 12-episodes of a very fun, charmingly-cheesy,”Hey, remember that…!?” show called RoboCop: The Animated Series. Fun fact: the person who helped write the pilot-episode for the cartoon is Robocop’s original screenwriter Michael Miner. Additionally, there was another animated series entitled RoboCop: Alpha Commando airing for 40-episodes between 1998 and 1999. Moreover, what child of the ’80s could not forget the 1988 RoboCop arcade game they more than likely pumped a handful of quarters into at a local Pizza Hut. 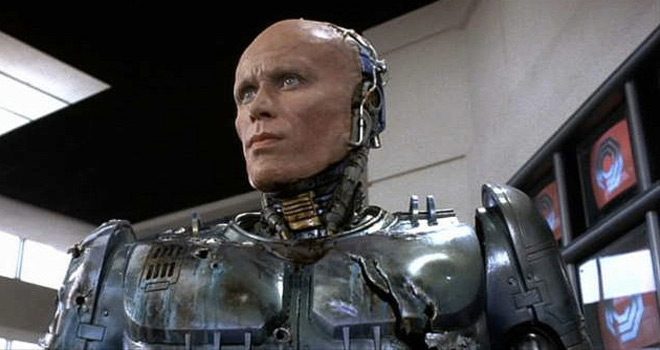 If the cartoons are too PG for some viewers wanting a little more bite in their tale of the titular cyborg, there was also the 1994 Canadian mini-series RoboCop: The Series, 2001’s RoboCop: Prime Directives along with comic books out there that have seen distribution releases from several reputable comic book publishers such as Marvel Comics during the earlier part of the 1990s, and Avatar Press during the years 2003-2006, all loosely-based on the movie. One publisher in particular is Dark Horse Comics, which released a clever 4-issue re-imagining that put RoboCop up against The Terminator during the later half of 1992. Coincidentally, Writer/Director Frank Miller, who had co-written the screenplays for both RoboCop sequels, also wrote this 4-issue RoboCop/Terminator mash ’em up.

The battery power of RoboCop’s cinematic-impact over the past three decades has yet to ever drain, nor will it ever need a lifetime-warranty to assure its long-lasting effect on moviegoers. Within the steel shell of RoboCop’s suit there lay a beating heart that pumps so much life through every electrical vein in its robotic mass. After all this time, Robocop still feels purely human. 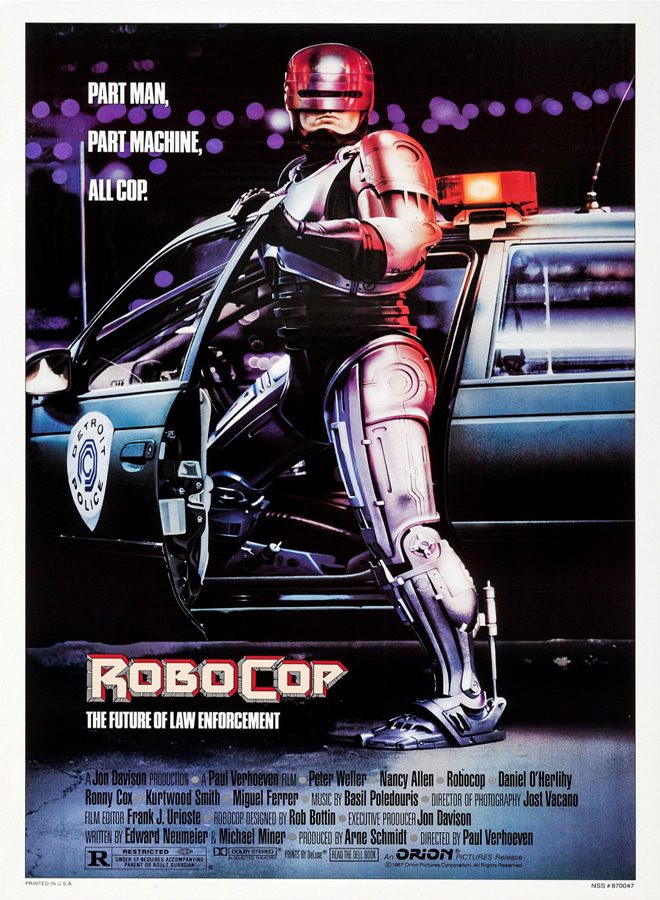