All good things must come to an end, but that does not mean when they do they cannot go out with a bang. The grand finale of the 13th annual Rock and Shock weekend in Worcester, Massachusetts, Twiztid’s Spooktacular Horror Show rounded out the unforgettable weekend in style. Filled with autograph signings, celebrity panels, vendors, and two prior concerts of relentless Heavy Metal, it was time for a diverse mix of Hip Hop artists to grace the stage of The Palladium on Sunday, October 16th.

The final concert event of the weekend kicked off as early as 3 PM, with some of the acts early on to perform including Killer Intellect, Kraezie Payn, NFG, Lyrical Deathwish, Splitface, Outland Camp, UFO, and James Dennis. Later on joined by Fury, Dirtyburg Productions, and Problemattik, it was non-stop action from start to finish. Amidst it all, sometime after 6 PM on the main stage, Whitney Peyton was set to take over. Out of the Philadelphia, Pennsylvania area, Peyton has been hard at work honing her songwriting for a decade. Dropping her debut album The Remedy in 2010, since Peyton has released three more albums, including 2016’s Firecracker. Setting out on her first tour supporting Twiztid in 2013, Peyton has built her following, and as soon as she hit the stage, provoked many cheers. Offering messages of positivity and individuality, Peyton played a set of tracks that included “Sorry That I’m Not Sorry,” “Through The Walls,” and “I Hate My Roommate.”  Those who missed her set at Rock and Shock,  Peyton continues to tour in support of Firecracker through December. 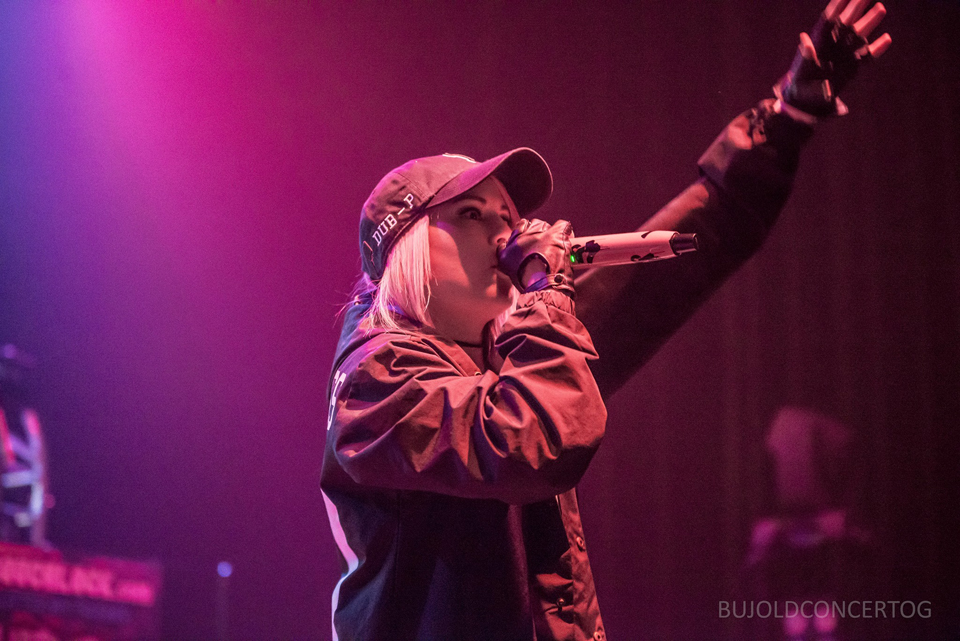 Directly following on the main stage was the three vocalist assault of Godz of Kaos. Made up of Grimm Graves, Bradley Butcher, and Justin Smith, Godz of Kaos are a welcomed addition to the Twiztid touring family and have been raising eyebrows each city they visit. This stop at Rock and Shock was no different as the group worked the stage side to side, keeping the audience on their toes as they rattled out cuts such as “Blow Ya Brains Out,” “Bad Dreamz,” and “Chainz.” Showing no signs of slowing down and out to make an impression, keep a look out for Godz of Kaos. 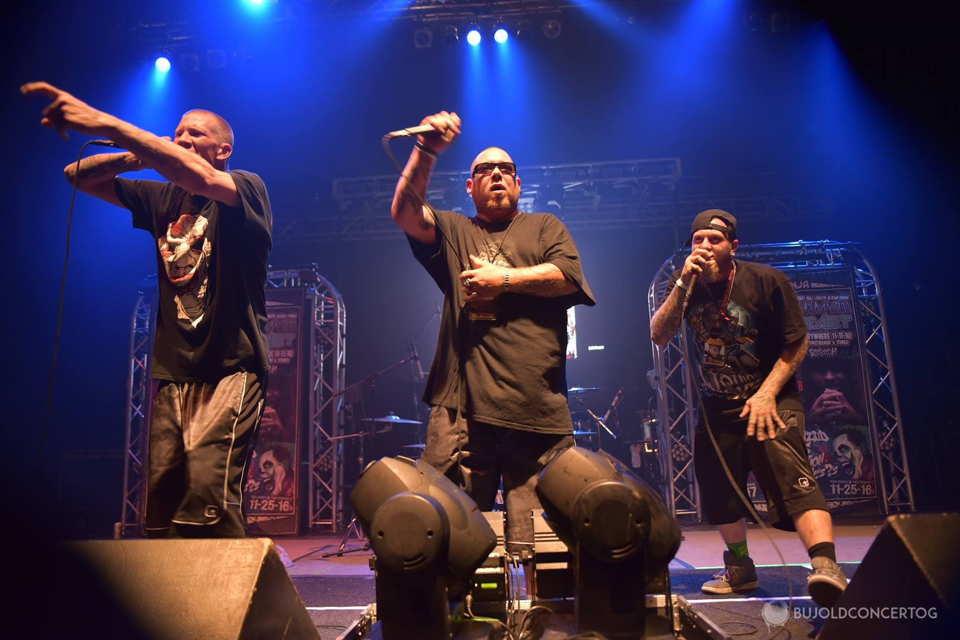 Keeping the energy flowing on the main stage, Ohio’s Menace 2 Sobriety came rushing out next. Together now since 2004, Menace 2 Sobriety is an interesting mix of styles ranging from Hardcore, to Punk, to Metal, to Hip Hop. A grassroots campaign built independently by the band themselves, Vocalists DOC, Johnny O, and Jey-Row, along with Bassist/Vocalist Marty McFly, Guitarist Thomas Collins, Guitarist Big Rich, as well as Drummer Jason Perkins are rising from the underground. Offering a bunch of original material through the years, including 2014’s Spencer, Menace 2 Sobriety tore it up with a raw sound that had everyone bouncing. True to Punk Rock’s core, the band crushed with songs such as “It Never” as well a cover of Insane Clown Posse’s “Homies.” With Twiztid for the duration of the Spooktaular Horror Show, they are scheduled to support them once again come New Year’s Eve at New Year’s Evil 9.

Hitting the main stage around 7:30 PM, out of Queens, New York, was Lex “The Hex Master.  Signed to Twiztid’s Majik Ninja Entertainment label, he released the debut EP, The Black Season, doing incredibly well. The EP impressively reached #10 on the Billboard Top Heatseekers chart, #49 on the Independent Albums chart, and #40 on the R&B/Hip-Hop Albums chart, all on the same week. Following up with Mr. Ugly July 2016, he is now set to release Contact Era November 11, 2016. Influenced by Nas, Tupac, DMX, Insane Clown Posse, Twiztid, and Blaze Ya Dead Homie, Lex “The Hex” Master pumped out a setlist including “Ninjas,” “Bomb On ‘E,” “I Don’t Like Your Face,” “Off Contact,” “Army of One,” and “Raw Shit.” Also releasing an exclusive EP, Unholy Trinity, he will now be on the road with Scum on the Merciless Assault Tour. 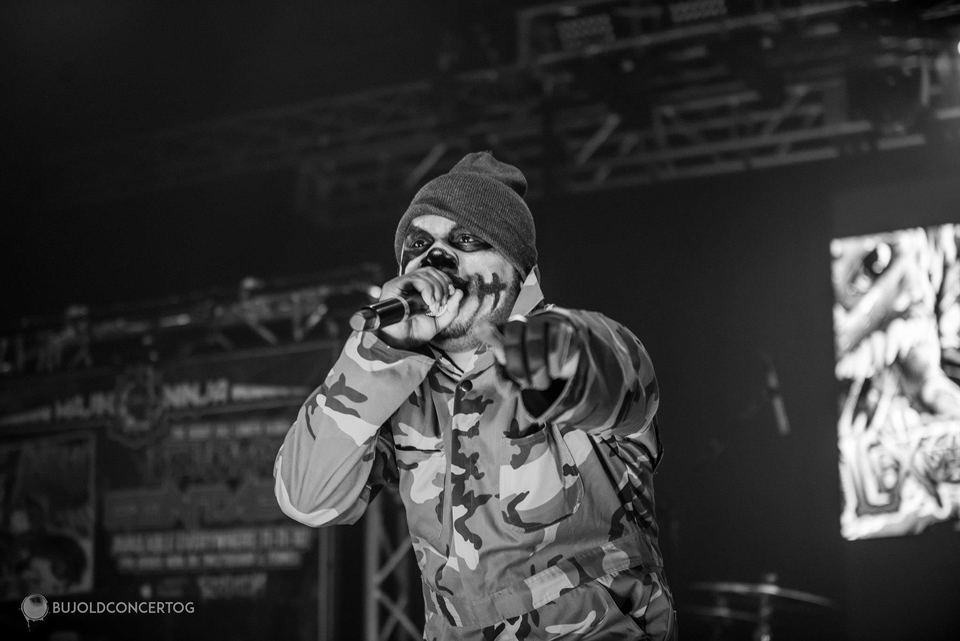 Also a part of the Majik Ninja Entertainment family, out of Detroit, Michigan, Zodiac Mprint was ready to go on the main stage around the 8 PM hour. Initially formed around 2006, this team is comprised of duo Blaze Ya Dead Homie and The R.O.C. After The R.O.C took a short break, they reformed in 2012, later collaborating with Twiztid on their For Tha Fam Vol. 2 album. Also comfortably residing in the Rap/Hip Hop genre, Zodiac Mprint busted out tracks such as new EP title track “Ride The Stars,” covers of Blaze Ya Dead Homie’s “Juggalo Anthem” and “They Call That Gangsta,” the latter joined by Lex “The Hex” Master. Their new EP, Ride The Stars, is out in stores now. 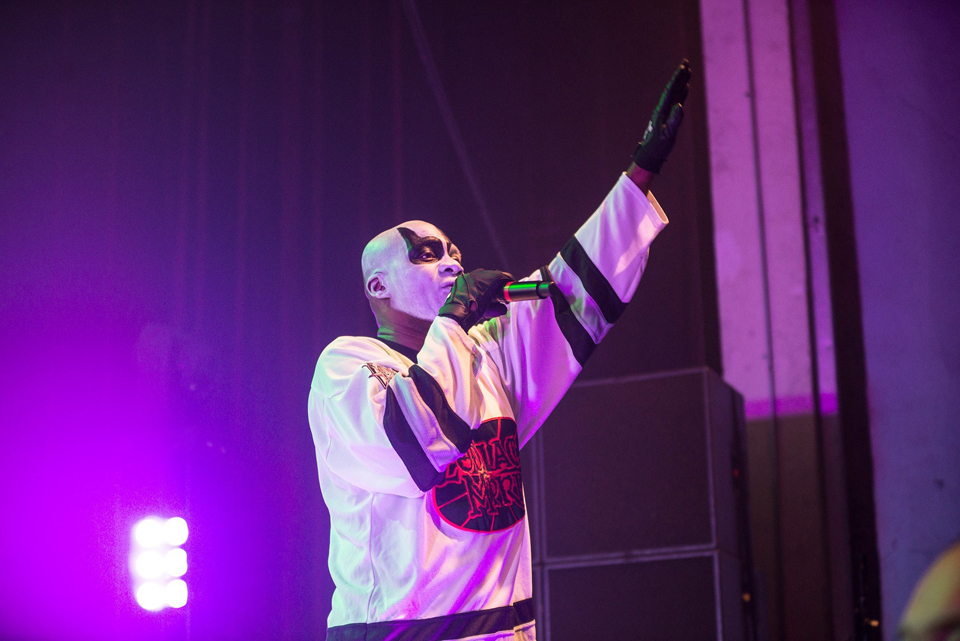 From Kansas City, Missouri, multi-talented Hip Hop artist Mac Lethal was ready to go around 9 PM on the main stage. Debuting with Men Are from Mars, Pornstars Are from Earth in 2002, he followed up in 2007 with 11:11, and kept himself current in 2011 with social media success on YouTube with his version of “Look At Me Now,” along with various projects such as a radio and TV show host, as well as albums Irish Goodbye and the new album, 2016’s Congratulations. Now an independent artist with multiple EPs, singles, and collaborations under his belt, he performed “Nerdy White Kid Kills Look At Me Now.” Keeping a busy schedule, fans should keep a look out for future tours. Congratulations can be purchase from him personally autographed, visit his pages for details. 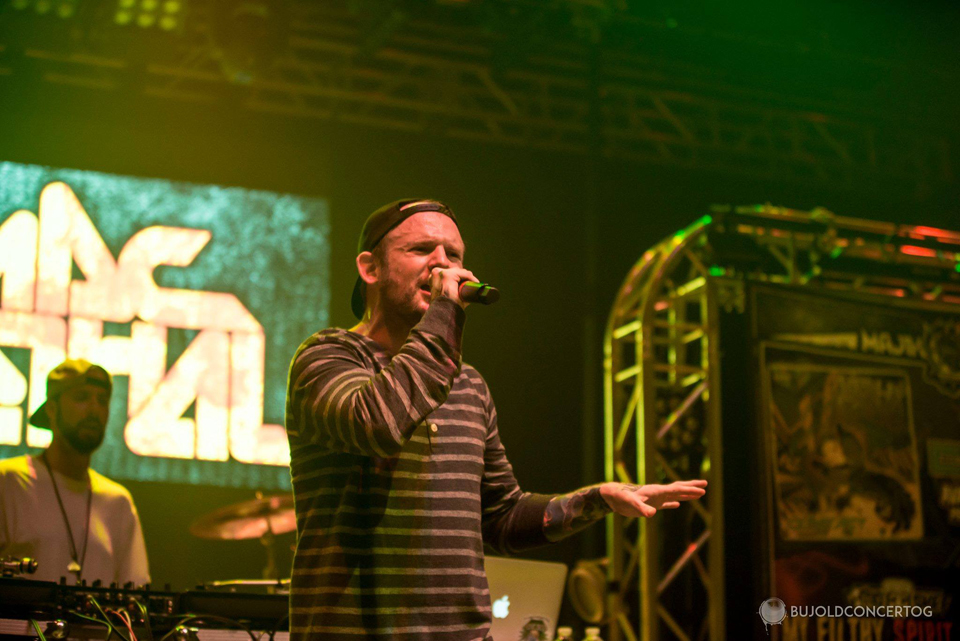 With so much happening over a lengthy six plus hour span, fans had a chance to see up-and-coming artists as well as established favorites. Naturally, the epic evening would not be complete until guests of honor, Twiztid, came onto the stage. A famed Hip Hop duo, consisting of Jamie Madrox and Monoxide Child, Twiztid have been topping charts since their 1997 debut, Mostasteless. Once a fixture and key component of Insane Clown Posses’ Psychopathic Records, Twiztid went independent sometime around 2013 before moving to Majik Ninja Entertainment in 2015, not skipping a beat when releasing the acclaimed The Darkness album. A testament to the members talents, determination, and vision, the album debuted at #3 on Billboard’s Rap Albums. A tireless touring machine, this would mark the third consecutive year Twiztid would bring their traveling circus to Rock and Shock.

Coming out with Horror theme music and flashing white lighting before emerging from smoke, cellphones were raised in the air to video the entrance as Madrox and Child flowed into “In Hell.” Complemented by the drumming of Davey Suicide’s Drayven Davidson, they moved on quickly into “Nightmarez,” and “Breakdown” before taking a quick break to ask who has been with them since day one, flowing into “Diemuthafuckadie.” 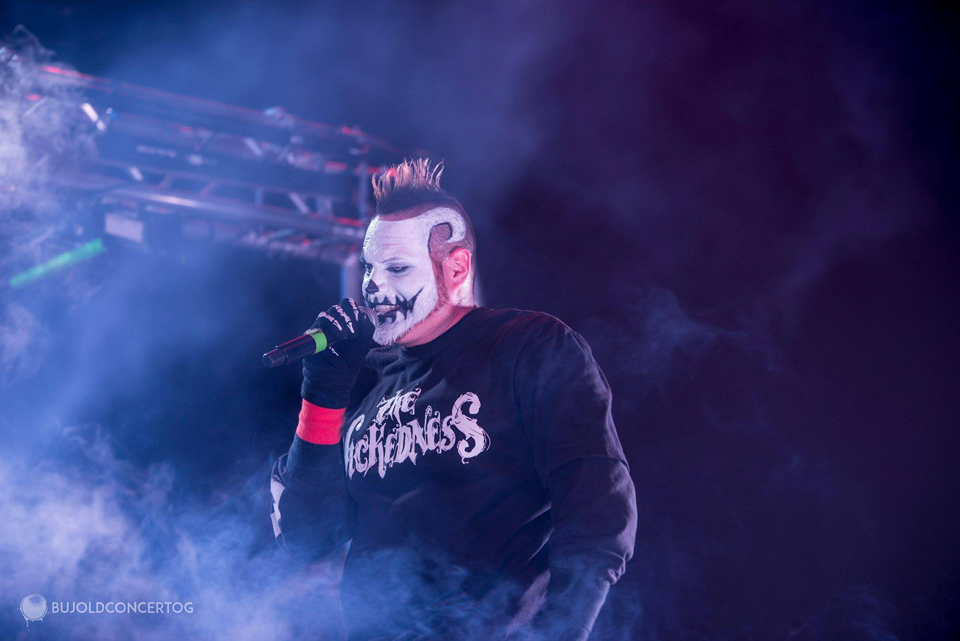 All wearing skeleton like makeup, Madrox and Child controlled the crowd with ease as they went on with “Bussyoheadopen,” “Rock the Dead,” “2nd Hand Smoke,” as well as “Different.” Having everyone’s hands in the air, they took few breaks in between minus a few moments of blackness here and there to address the crowd and pump them up, seeing if they want more old school cuts. That said, the old school vibes came from “Old School Pervert,” “I’m Alright,” and “My Addiction” while newer flavors included “Down Here.”

An extremely length performance that had adrenaline rushes and chill out moments throughout, for nearly an hour, Twiztid played a killer set that rounded out with songs such as “We Don’t Die,” “So High,” and “Lift Me Up.” Through it all, they kept the excitement high and did not miss a step in their rhymes or tone, all while being superb entertainers. That said, Twiztid’s Rock and Shock visits are becoming a welcomed tradition to the diverse Horror and music convention. Hopes are they will return again in 2017, but until then, Jamie Madrox and Monoxide Child still have plenty lined up, including the 3rd Annual Twiztmas Party December 2nd, New Year’s Evil 9 on December 31st, before dropping The Continuous Evilution Of Life’s ?’s on January 27th of next year. 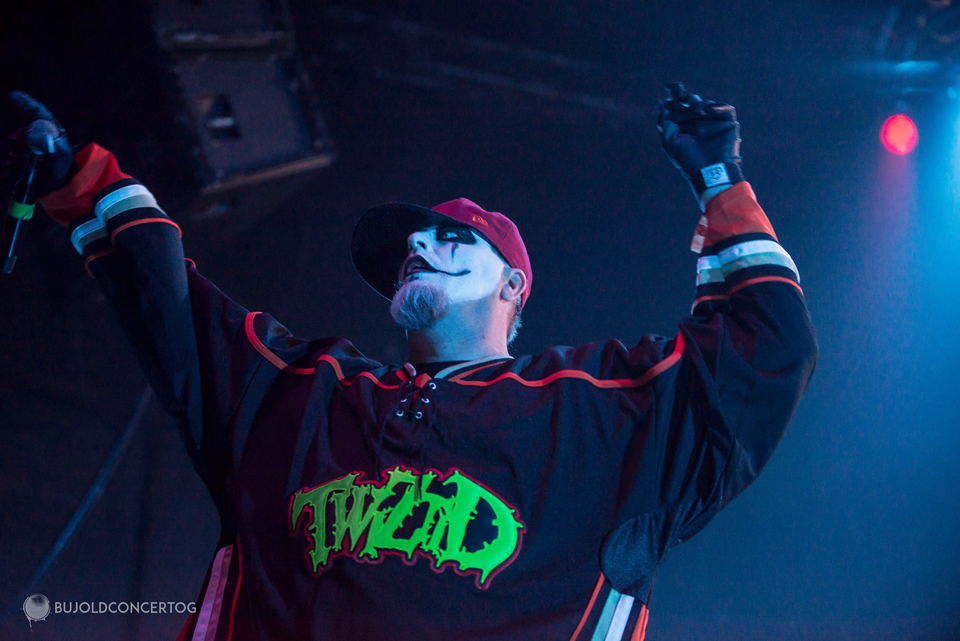 For more on Rock and Shock visit rockandshock.com