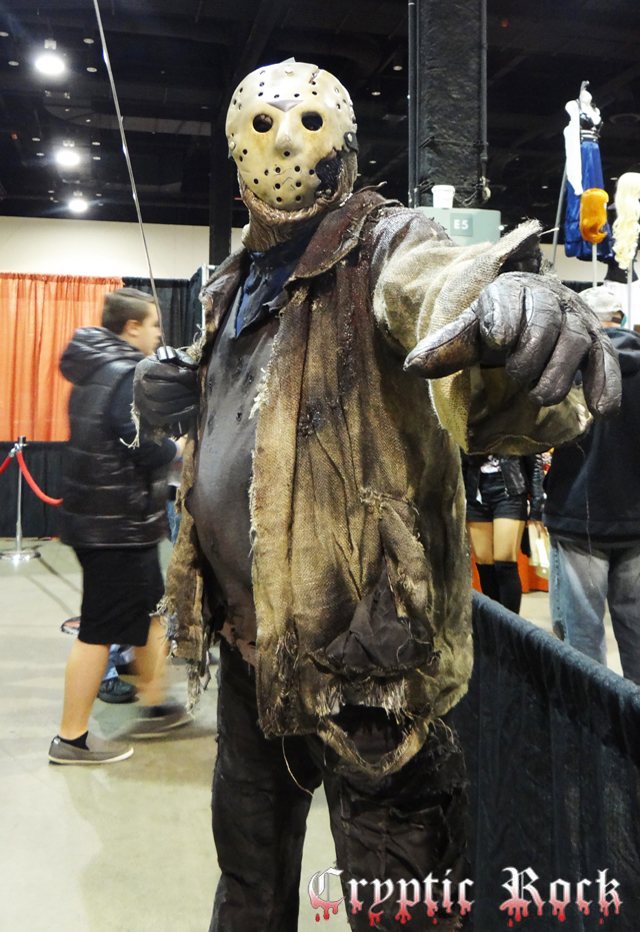 As the outside temperature falls and the leaves change to brilliant oranges, golds, and reds, most New Englanders put away their bathing suits and bring out their heavy, cable knit sweaters. In Worcester, Massachusetts, this change from Summer to Fall can only mean one thing – once again, the time has come for Rock and Shock. The 12th Annual Rock and Shock took place this year at both the DCU Center and the Palladium in Worcester, Massachusetts on October 16, 17, and 18, 2015, an event promoted by MassConcerts, New England’s largest Indie concert promoter. Every year, music and Horror fans from all over New England travel to Massachusetts to catch a glimpse or even get an autograph of a favorite celebrity or musician, ask those same celebs questions and learn more about their trade in the panel room, check out the newest Horror films and shorts, get some new ink from the best local tattoo artists, pick up rare Horror gems and the swag that goes with them, get some tips on creating Horrors of their own, meet the authors and/or illustrators of up-and-coming Horror comics, strut their stuff in the yearly costume contest, or create some amazing artwork and crafts with their kids. As always, there was a little something for everyone.

The music aspect of Rock and Shock took place at the Palladium while the convention itself happened solely in the DCU Center. Just a sample of the celebrities on hand, Horror Director George A. Romero (Night of the Living Dead 1968) was signing autographs at his own table, while Director Adam Green (Hatchet series) humbly greeted ecstatic fans across the way. The line for Derek Mears (Friday the 13th 2009) seemed never-ending as people waited patiently for their turn to talk to the gentle giant. American Horror Story: Freak Show cast members Naomi Grossman and Erika Ervin sat side by side, inspiring both freaks and normal alike, while The Monster Squad’s Stephen Macht, Duncan Regehr, and Michael Reid McKay reminisced with fans about the classic 1987 film. Horror icons Tobin Bell (Saw series), Doug Bradley (Hellraiser series), Bill Moseley (The Devil’s Rejects 2005), John Amplas (Creepshow 1982), William Sanderson (Blade Runner 1982), P.J. Soles (Halloween 1978), Felissa Rose (Sleepaway Camp 1983), Rachel True (The Craft 1996), Samantha Mathis (The Strain TV series), Traci Lords (Blade 1998), and William Forsythe (Halloween 2007) kept up a frenetic pace of signing autographs and posing for pics for the entire weekend.

Author of the dark and disturbing, Jack Ketchum gave advice to old and new writers alike while graphic artist Derek Room promoted his newest book. Members of Rock photographer Jeremy Saffer’s The Rocking Dead took turns hanging out at their table in between photo shoots and shows. Sherman Howard, the man who played the most famous Zombie of all time, Day of the Dead’s (1985) Bub, kept up witty banter with anyone who visited his table. WWE wrestler Bushwacker Luke hammed it up with fans. It would not be Rock and Shock without a word from the world’s punniest undead man, The Cryptkeeper – voiced by John Kassir – who was on hand all weekend to laugh maniacally and announce upcoming events over the loudspeakers.

Some of the celebrities that were invited took time out of their weekend to talk to fans in the panel room, discussing their latest or most famous projects and answering questions along the way. Felissa Rose talked Sleepaway Camp while William Sanderson told stories from the set of the True Blood TV series. Fans lined up out the door for a conversation with George A. Romero and a Q&A with Tobin Bell. Samantha Mathis and John Amplas compared Vampires now and then. Stephen Macht, Duncan Regehr, and Michael Reid McKay talked about the makeup and humor from Monster Squad and Doug Bradley, Bill Mosely, Bill Johnson (Texas Chainsaw Massacre 2 1986), and Dan Yaeger (Texas Chainsaw 3D 2013) discussed what it was like to live the lives of Horror legends. Twiztid, the Demented Duo, returned once again to the Rock and Shock panel room and discussed their latest projects with corpse face painted Jugallos.

Jack Ketchum, Joe Knetter, Jack Haringa, and Ken Vaughn took turns giving advice to would-be authors in the crowd. Although missing their American Horror Story: Freak Show compatriot Rose Siggins, Naomi Grossman and Erika Ervin inspired the audience with tales of strength against adversity. Derek Mears and Adam Green took things a step further as each man dressed up and answered questions as if they were the other, a stunt that had fans falling from their seats with laughter. They then took turns acting out bad convention etiquette scenarios, both from the celebrity and the fan point of view, a highlight of the weekend.

The 9th annual Rock and Shock Film Fest took place on the third floor of the DCU Center. Several short blocks were played throughout the weekend, with the Horror Comedy Scary Little Fuckers: A Christmas Story (2015) one of the standouts offered this year. Also shown was the Comedy Drama Manson Family Vacation (2015), Old 37 (2015) with Kane Hodder and Bill Mosely, Chainsaw Maidens of Hell (2015) also with Hodder, the dark, gritty Pieces of Talent (2014),  Upsidedown Cross (2014), Diary of a Deadbeat (2015), special effects makeup TV series Bloodworks, the graphic novel based Fury: The Tales of Ronan Pierce (2014), the short The History of Metal and Horror and the SciFi Fantasy Gilgamesh (2014). Although scheduled, Bite School (2015) was not shown.

The Creative Lair was available all weekend for both kids and adults alike, with pumpkin decorating, Spooky Skwerl stories, and cheesecloth decoration crafts for the little ones and Horror drawing classes, Zombie makeup special effects lesson, and DIY germ killer and paranormal evidence workshops, plus start your own podcast, self-published novels and short story lessons. An entire row of tables was set up for tattoo artists, and their chairs were full all weekend as Horror lovers waited to get their favorite slasher or final girl inked onto their bodies. To honor all men and women that serve the US, the last day of Rock and Shock was free for all active and retired military, fire fighters, police, and EMTs, an opportunity unique to this yearly event.

One must not forget the vendors of the weekend, the place where fans could find one of a kind items of every thought and idea, including posters, signed photographs, movies in Blu-ray, DVD, and VHS, dolls, CDs and records, original artwork and sculpture, Lego figurines, zombie caricature portraits, masks, keychains, clocks, books and comic books, costume designers, make-up artists, model makers, soap dispensers, filmmaker, distributor and production company tables, t-shirts and jewelry of all kinds, from Game of Thrones dragonglass necklaces from Villager’s Trading Post to tiny animal skull earrings at The Craft. If one could not find what they were looking for, they were not looking hard enough.

Although another year of Rock and Shock has come and gone, the memories and experiences had by fans, celebrities, musicians, and vendors alike will not be forgotten for a long time. Each year, October brings a bigger and better experience to the DCU Center and the Palladium. Should the opportunity arise to go to a future Rock and Shock, New England fans of Horror and music should not delay in grabbing up those tickets.

Skindred – Roots Rock Riot (Reissue Review) The Pretty Reckless – Death By Rock And Roll (Album Review)
Like the in-depth, diverse coverage of Cryptic Rock? Help us in support to keep the magazine going strong for years to come with a small donation.