For the last forty-seven years, British Rock god Ozzy Osbourne has been a major force in music, first founding the band, Black Sabbath, then, after getting fired in 1979, embarking on a solo career that has taken him beyond the music stratosphere.  With the late Randy Rhoads (guitars), he would only get to do two Ozzy albums before his death in 1982, along with Bob Daisley (bass, backing vocals, and gongs), Don Airey (keyboards), and Lee Kerslake (drums, percussion, tubular bells, and timpani), Ozzy released Blizzard of Ozz September 12th, 1980, making it thirty-five this year.

Recorded in a little under a month at Ridge Farm Studio in Rusper, England with the band producing, Max Norman (Grim Reaper, Megadeth) engineering, and Chris Athens (Flyleaf, AC/DC) heading the mastering at Sterling Sound Studios in New York for Jet Records, Blizzard of Ozz is hands-down easily considered Ozzy’s best solo album to date, with its parable-like songs, although only making it to 21st on the Billboard 200.  It would go on to be certified four times platinum in the US while placing 3rd on the Top Pop Catalog Albums.  Ozzy’s debut album would join the ranks of top albums like Judas Priest’s British Steel, AC/DC’s Back in Black, and his former band, Black Sabbath’s Heaven and Hell, which he considered his direct competition.

Given that, going into the album, Ozzy’s main goal was to make the feel as far removed from Sabbath as he could.  To make this happen, Ozzy wrote with Rhoads and Daisley, starting with demos for “I Don’t Know”, “Crazy Train”, and “Goodbye to Romance” in Monmouth, Wales, then, continuing with “You Looking at Me Looking at You” in Birmingham while the rest fell into place.

For instance, Blizzard of Ozz’s tracks, “I Don’t Know,” “Crazy Train”, and “Goodbye to Romance” deal with disillusionment and uncertainty in the future.  With “I Don’t Know,” there is an urgency with the cadence like a train on tracks provided by Kerslake’s drums and Rhoads’ break-neck guitars.  Ozzy’s voice has an air of exasperation as he belts out, “I don’t know.”  The song that has become synonymous with Ozzy is “Crazy Train,” despite very little notice on first release.  It would show up again on Ozzy’s Tribute album that celebrated Randy Rhoads five years after his death.  Two-thousand and nine saw the song certified double platinum.  Again, Rhoads guitar play drives the track with loaded riffs like a train on track, which coincidently, the video has Randy’s V guitar flying over tracks to Ozzy as Ozzy sings, “Mental wounds still screaming/Driving me insane/I’m goin’ off the rails on a crazy train/I’m goin’ off the rails on a crazy train.”  However, the song that holds the most significance for Ozzy is “Goodbye to Romance” as he has said it is his making peace with breaking up with Sabbath, previously thinking he was washed up musically.  “I say goodbye to romance, yeah/Goodbye to friends, I tell you/Goodbye to all the past.”

Immediately following “Goodbye to Romance,” Randy Rhoads shows why he is considered one of the top five Heavy Metal guitarists according Blabbermouth with his acoustic “Dee.”  Before he became a Metal guitar god, Rhoads was classically trained.  Here, he was given the limelight for forty-nine seconds of serenity.  Then, “Suicide Solution” comes in on a hard riff.  “Suicide Solution” was written by Ozzy to help him grieve after the death of AC/DC’s Bon Scott from alcoholism, but Daisley has said he wrote the song referring to Ozzy’s own demons.  The song also raised some controversy when it came under fire six years later when a kid committed suicide reportedly after listening to the track, going as far as playing a bit of the track backward to hear subliminal messages.  Reputation aside, Ozzy commands attention with his lyrical delivery while Randy rips up the air with an otherworldly melody that reverberates.

The drums pound like a hangover.  “Mr. Crowley” was a piece based on the occultist, Aleister Crowley, who Ozzy had read about.  This slow, brooding song has a bluesy air to it as Ozzy’s lyrics wonder about the enigma that was Aleister Crowley.  “No Bone Movies” showed the Funk/Metal Ozzy’s band could deftly pull in addition to showing the more playful side to the band, which, by no means makes it a throwaway track.  From Randy’s weaving guitar and the hard drums, to Ozzy’s lyrical delivery, the track never loses its energy.  When it comes to “Revelation (Mother Earth),” the band ominously slows as Ozzy sings a message of live and let live with a sitar bringing in the intro followed by church bells, then, a light riff, and a snare drum.  As the message grows dire, the tempo speeds to the finish.  “Steal Away (The Night)” finishes Blizzard of Ozz as rocking it comes in with Rhoads’ guitar prowess on display as he slides up and down the neck with the drums in pursuit while Ozzy’s lyrics could be another affirmation that he is flying solo from Sabbath, or the song could be taken as a love song to Sharon.  The deluxe album has the additional track, “You Lookin’ at Me Lookin’ at You.”

Blizzard of Ozz proved to Black Sabbath fans as well as Ozzy, himself, that as a solo artist, he was still a force to be reckoned with. Thirty-five years on, Blizzard of Ozz has proven it has staying power by being one of the top Metal albums of all time. 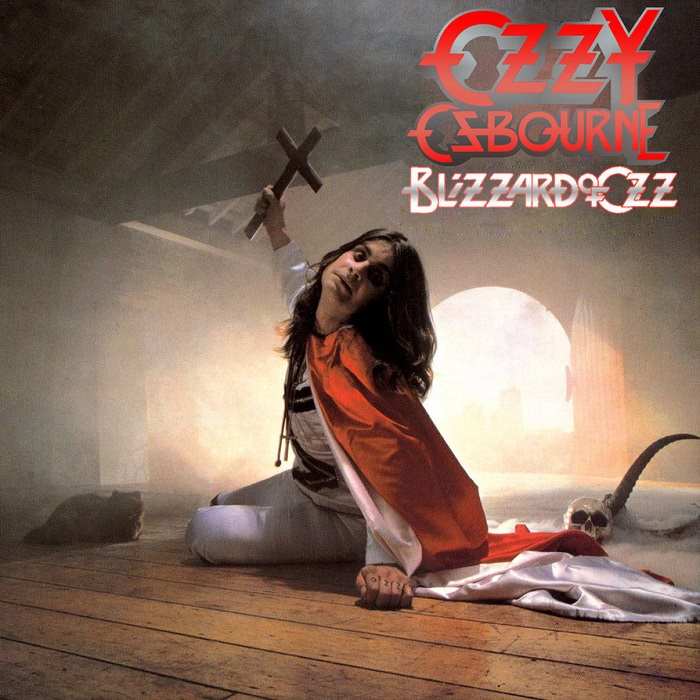