Everyone is looking for some sort of inspiration in life, a motivation to keep fighting through it all. Tapping into what is the fabric of human spirit, back in 1976, the character of Rocky Balboa was introduced to audiences. A character that would become a synonymous part of American Pop culture for decades to come, it all began with the original story of Rocky, which premiered in theaters on November 21st of 1976. 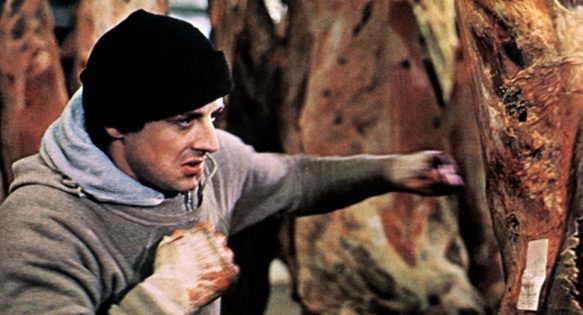 A character created by legendary Actor Sylvester Stallone, he was motivated to create Balboa after witnessing a championship boxing match between Muhammad Ali and Chuck Wepner in March of 1975. Completely inspired by the Ohio match, Stallone finished his script in three and a half days. His Rocky was somewhat autobiographical, a working class kid with a heart of gold from the mean streets of Philadelphia, but with elements of Rocky Marciano and other real-life boxing champions. As a new writer and a young actor in the dog-eat-dog world of showbiz, Stallone initially struggled to drum-up studio interest for himself and his passion project.

Eventually, United Artists expressed interest in the script and the film, but they had intentions to cast a known star to play the lead role. Unwilling to compromise, Stallone had to fight for his right to represent the Rocky Balboa character on the big screen, and all these years later, could audiences imagine it being anyone else? Real-life was mirroring the script, Stallone was the underdog fighting the greatest fight of his life, to get his film made and to play the starring role. When he refused to sell the script to the studio without being cast in the lead, Producers Irwin Winkler and Robert Chartoff decided to take the ultimate chance on Stallone. Despite serious reservations about not casting an A-list star in the role, the production duo cast Stallone and thus the legacy of Rocky Balboa was born. 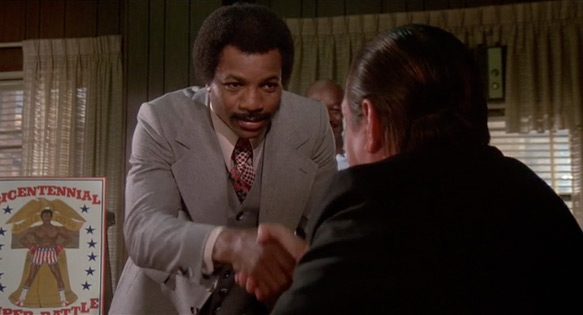 Other roles that were surprisingly difficult to cast included the film’s main antagonist, Apollo Creed and Adrianna “Adrian” Pennino, Rocky’s eventual love interest. Boxer Ken Norton was seemingly a shoe-in for the role of Heavyweight Champion of the World Apollo Creed, though he was forced to pull-out of filming at the eleventh hour. Thus, the role went to Carl Weathers (Predator 1987, Action Jackson 1988).  For the role of Adrian, several actresses like Carrie Snodgress and Susan Sarandon were considered, but, ultimately, it was the unassuming Academy Award nominated Talia Shire (The Godfather, The Godfather II) who won the part.

Additionally, veteran Actor Burgess Meredith (Batman TV series, The Sentinel 1977) was cast as Rocky’s best friend and trainer, Mickey, while a gruff Burt Young (Chinatown 1974, Back to School 1986) plays Rocky’s friend, Paulie, who hooks him up with his sister, Adrian. Individually, each character had their own underdog role: whether it was Adrian’s shyness or Mickey’s desire for vicarious fame. Above all, they all built a persona that grew more in-depth as the film wore on. 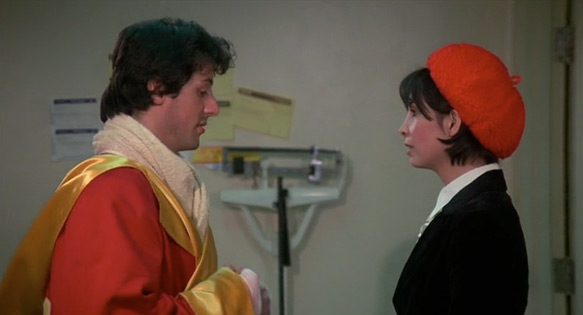 Once the cast was set, production began at the start of 1976 and ran for two months, predominantly in Stallone’s beloved Philadelphia with pick-ups being shot in Los Angeles. Having a look that was enticing to audiences, the hand-held Steadicam, which had been invented the year before, was used to shoot Rocky’s training run through the streets of Philadelphia, as well as some Apollo Creed/Rocky fight scenes. This allowed Director John G. Avildsen to get up-close on Stallone, to show his true grit as he trudged the streets, and to depict the blood, sweat, and tears that went into the greatest fight of the hero’s life.

As with all technology, the Steadicam was a double-edged sword, it made smooth the darkest edges off the action, but allowed Avildsen to place the audience right in the center of that action. Where it allowed for close-ups, it lacked grit. The action was not, however, smooth, seeing Stallone and Weathers both suffered real injuries that were, ironically, the opposite of their film injuries; Stallone bruised ribs, Weathers injured his nose. Speaking of which, the fighting scenes were exceptionally bloody for 1970s cinema, but the blood, no doubt, added to the drama and depicted the passion of the boxers in the ring. Tying in the theme of overcoming, Apollo Creed’s character was fighting for his integrity, his desire to not fall to the underdog. Meanwhile, Rocky was fighting for his place in the world, a young nobody taking on the proverbial Goliath. 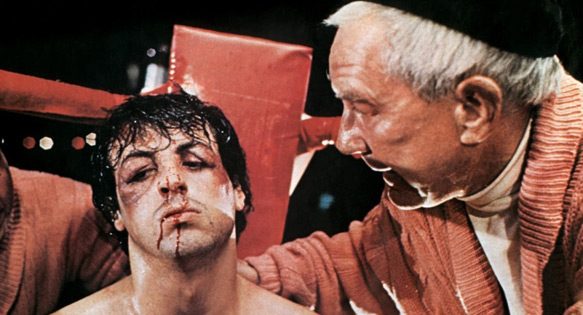 To maximize Rocky’s effectiveness, the score had to be authentic. Songwriter and Composer David Shire, ex-husband of Talia Shire, was initially tapped to score the film, but he turned down the gig due to prior engagements. This lead the way for famed Soundtrack Composer Bill Conti to take on the project. Conti knew that the music for the score had to begin softly, unveil itself slowly, and ultimately rise and soar with the action in the climax. The main theme had to be anthemic, a musical storytelling of struggle and fight; a musical composition that perfectly summarized the deep tension of the film. That said theme, “Gonna Fly Now,” was that anthem released as a single and eventually hitting No. 1 on Billboard magazine’s Hot 100 list. Since, the American Film Institute has placed the song as No. 58 on its AFI’s “100 Years…100 Songs” listing.

Much like other films at the time, with a gritty quality, ala 1971’s The French Connection and 1977’s Saturday Night Fever, Rocky captured the culture of the era magically. Going on to amass an estimated $5 million in ticket-sales in its first week alone, Rocky’s North American box office sales for 1976 would total some $177 million, making it the largest silver screen moneymaker of the year. When awards season rolled around, Rocky would win the Academy awards for “Best Picture,” “Best Director,” and “Best Film Editing,” all testaments to Stallone’s unwavering vision of the story.

Of course, as any fan knows, Rocky was merely the beginning of a successful franchise. Three years later, 1979’s Rocky II developed Rocky’s character further, and presented the much-anticipated rematch between Rocky and Apollo Creed. Then 1982’s Rocky III saw a shift in character roles with Apollo Creed now becoming a mentor to Rocky after the tragic death of father-like trainer Mickey. From there, the story of Rocky became one everyone from every walk of life new and loved. Unquestionably Stallone’s baby, each film would all tug at heartstrings, paying homage to the theme that everyone can overcome any obstacle with perseverance and spirit. 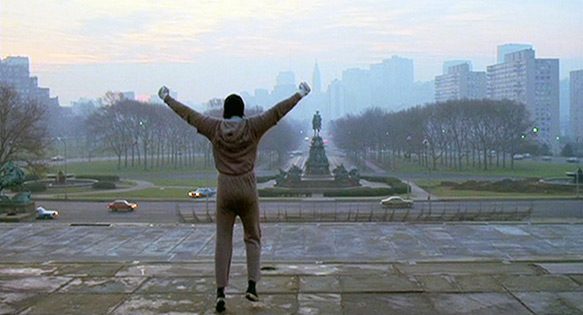 Breaking it down, Rocky was a modern day David and Goliath tale of a passionate fighter from the mean city streets, the ultimate underdog elevated to stardom through his passion, determination, and sheer grit. Rocky Balboa was the everyman who gazed directly into the eyes of defeat and did not give up. This is foreshadowed in so many aspects of Rocky, going from a debt collecting thug on the Philadelphia docks to his triumphant run up the 72 stone steps at the Philadelphia Museum of Art prior to his bout with Apollo Creed. By the way, that famous stair scene in Rocky has been reenacted by countless fans through the years. Making it more fun, when making their way to the top, they will find the bottom of Rocky’s Converse sneakers bronzed into the stone.

The story of Rocky is one of passion and fortitude, mimicking that of his creator, Stallone. All this said, Rocky is about a boxer, but not a film just about boxing. There was love, perseverance, blood, and faith. To this day, we search for that character in our stories with whom we can identify, whose struggles elevate them to a new level, to rise above. For 40 years, Rocky has been proving to people across the globe that no matter how hard life hits, no matter the odds, you should never, ever give up. 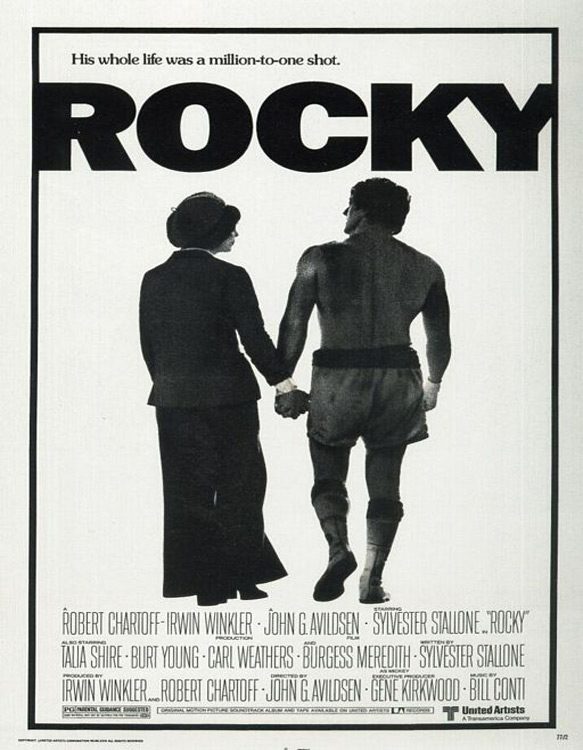