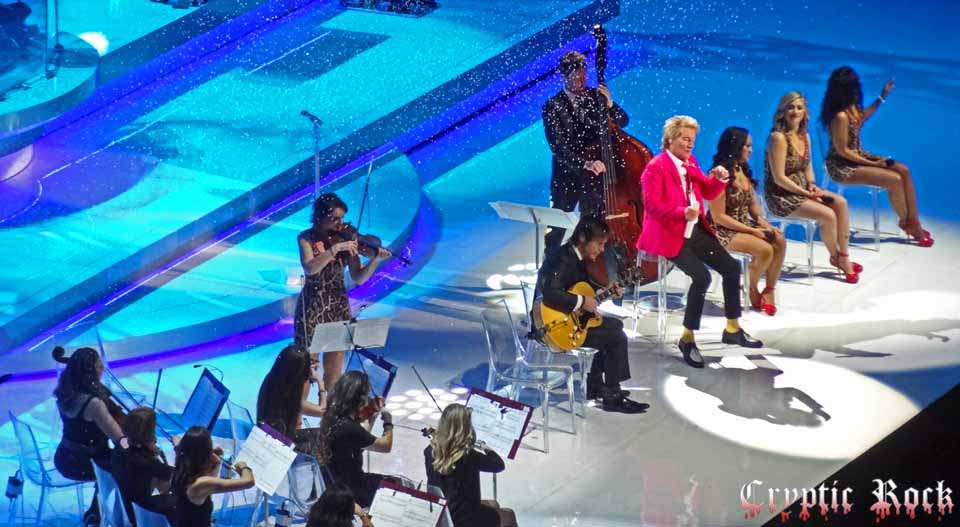 Classic rock appreciators were given a break from the holiday rush on Monday December 9th at Madison Square Garden, NYC. That break came in an early Christmas present of Rod Stewart and Steve Winwood teaming up for a concert. Originally scheduled for April, the tour had been postponed until December due to Stewart working on his first rock studio album in 2 decades entitled Time. Having a strong fan base built over a 50 years career, Stewart fans accepted the date change and in response still sold out the 19,000 plus seat arena. While some fans may have speculated the new date would no longer include Winwood as opening support, this was not the case and the original announced bill was ready to make this a magical evening.

Taking the stage first, Steve Winwood, is one of the most accomplished rock musicians alive. With career spanning from time in the Spencer Davis Group, Traffic, and Blind Faith, Winwood has made an impressive a solo career for himself. His multi-instrumental talents have been recognized with an induction to the Rock and Roll Hall of Fame as a member of Traffic back in 2004. Having played Madison Square Garden a few years earlier with Eric Clapton, Winwood is no stranger to the arena.

Winwood took the stage spending a great deal of time behind his piano ever so perfectly stroking the keys. With a strong vocal performance by Winwood, his backing band really were magical, adding color and depth to each track. Keeping things balanced with new and old tracks including “Secrets”, “I’m a Man”, and “Can’t Find My Way Home”, fans applauded extensively throughout. Hearing tracks like “Low Spark of High Heeled Boys” really jazzed things up a bit as the garden shrunk from a mecca to lounge in the heart of the listeners. Clearly a fan favorite and 80’s hit Winwood played the uplifting “Higher Love” as fans stood in the aisles singing and dancing. The set closed out with soulful rock hit “Gimme Some Lovin'”. All in attendance enjoyed Winwood’s jam session, dazzled by the instrumentation by himself and his band. 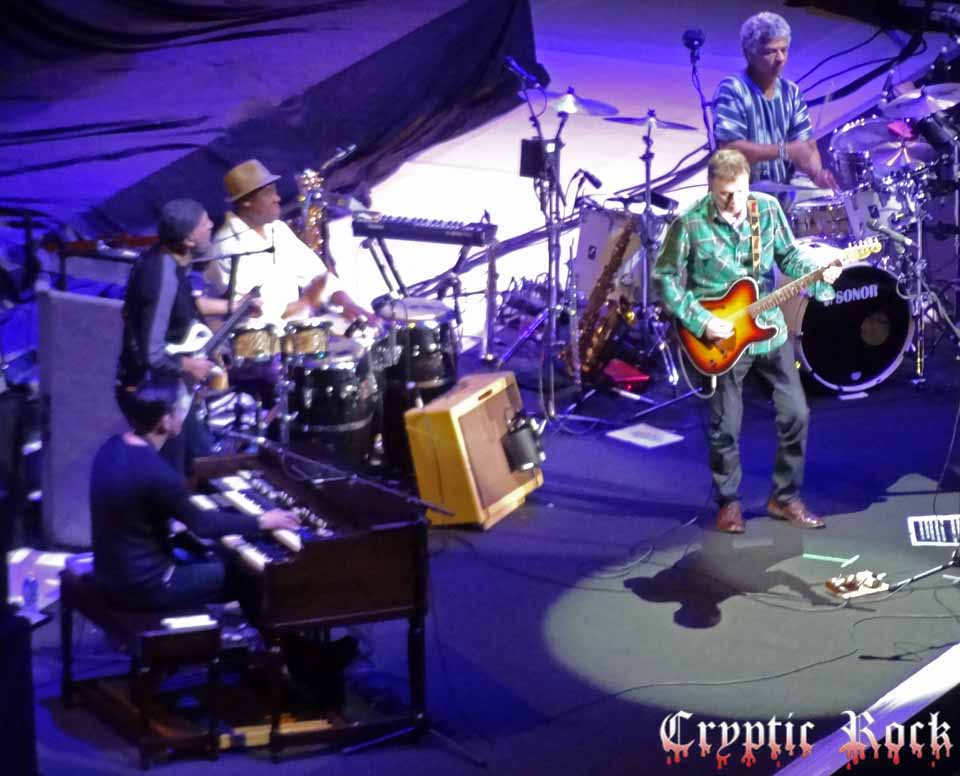 With one rock icon complete a very brief intermission lead the crowd directly into the main attraction. While Rod Stewart has transitioned into adult contemporary over the years one cannot forget this guy is a rocker. With a star-studded career including time with Faces to his solo work, Stewart is on top of the list of biggest selling artists of all time. With all the success Stewart has made a home at one of the world’s most historic arenas, played Madison Square Garden an amazing amount of times over the years. The bright white stage looked breath-taking with the lights shining and the massive screens in the background and NYC was ready to rock n roll.

Stewart came out dressed in metallic silver sit moving around the stage at an exciting rate while his backing band wore black suits for a classy contrast. The set opened up with a string of solo hits including The Isley Brother’s “This Old Heart Of Mine”, Sam Cooke’s “Having A Party”, and “You Wear It Well”. Stewart sang passionately and showed at 68 years of age he can rock with the best of them. 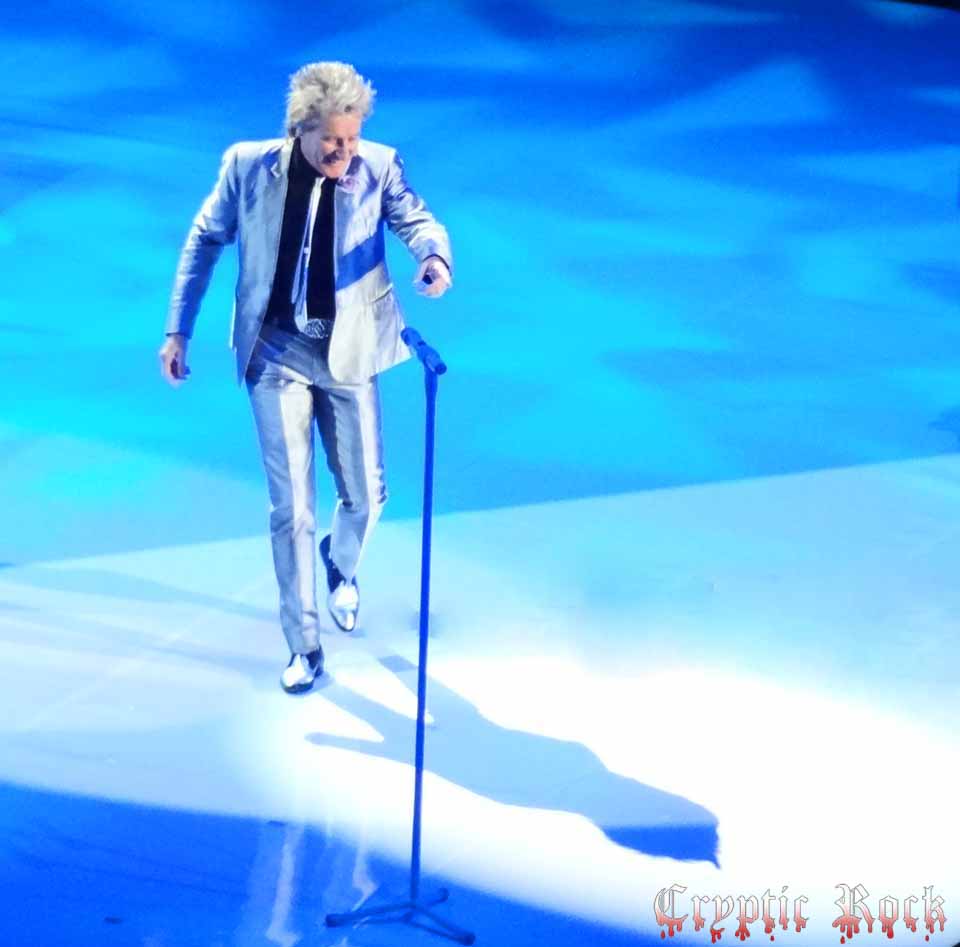 It was at this point Stewart spoke with the audience and apologized for postponing the show and promised the evening would surely make up for it. Fans cheered graciously and were given the 1971 Faces hit “Stay With Me”. The mood was then mellowed out after the fast start with the cool hit “Tonight’s Your Night”. Fans swayed back and forth and there was a feeling of love in the air. Fast forwarding a few decades, Stewart went into his signature 80’s his version of “Some Guys Have All the Luck”, turning the Garden into a dance party. The high-definition screens showed graphics to add to the performance. Keeping the energy flowing Stewart introduced the next song, “The Rhythm of My Heart”, with a dedication to soldiers which received a warm ovation. The song has always had a warm tranquil feeling but hearing it live raised that emotion to a heightened level. Combining backup female vocalists and full thick instrumentation made for an amazing moment. 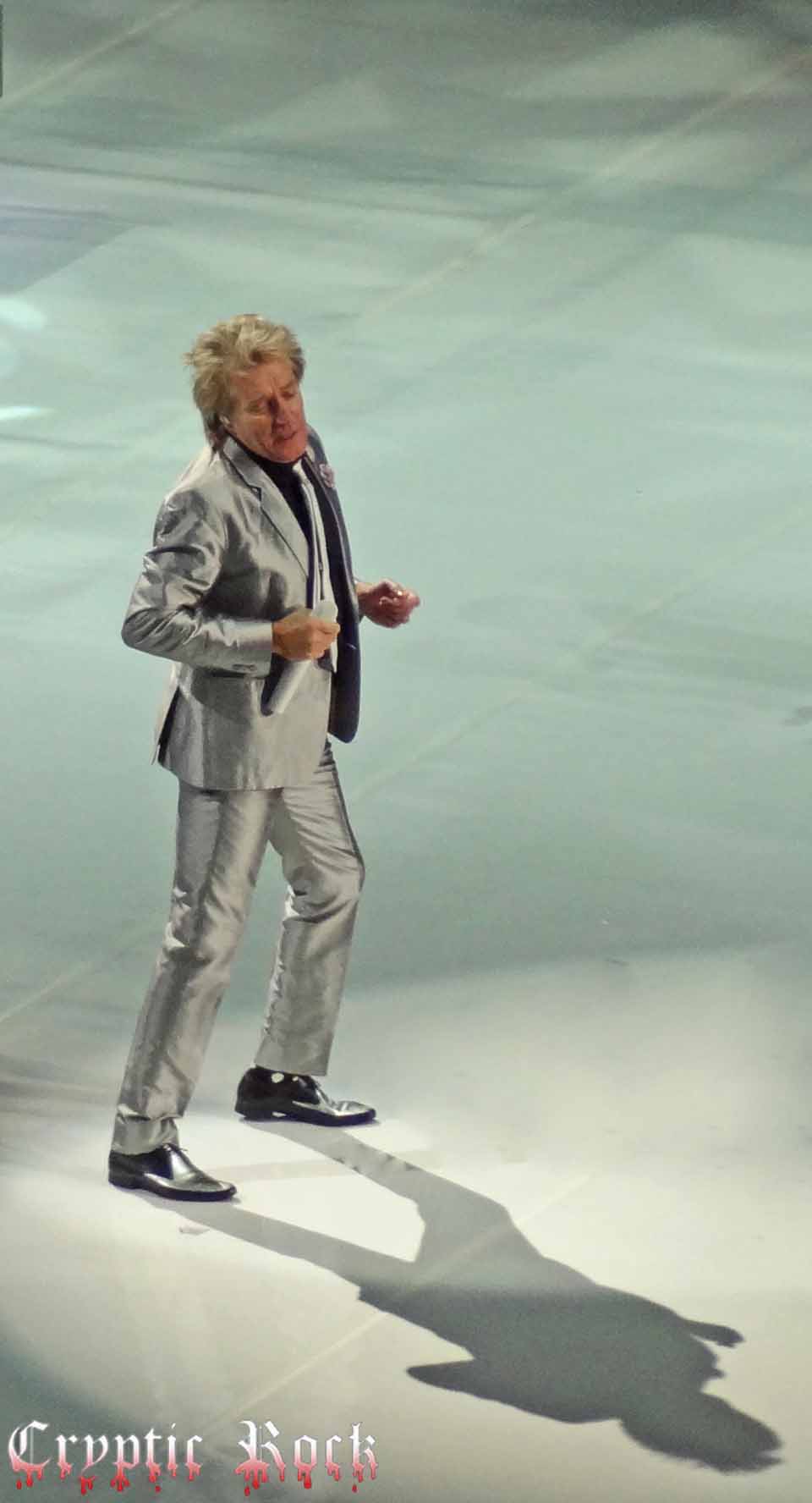 It was at this time in the set Stewart brought out a surprise guest in his daughter Ruby. Ruby is an inspiring vocalist herself and this being her first time performing at Madison Square Garden the 26-year old handled her performance with grace. She performed her original song “Just One More Day” with passion and spot on inflection. It was a nice moment to see a proud father give his child a chance to share in the spotlight in front of a sold-out audience. Ruby remained on stage with Stewart and the full band through “Forever Young”. Another uplifting Stewart tune which warms the heart each time heard. Stewart and Ruby’s duet made for a nice rendition of the track leaving all in attendance smiling and possibly reminding them of how proud they are of their children. 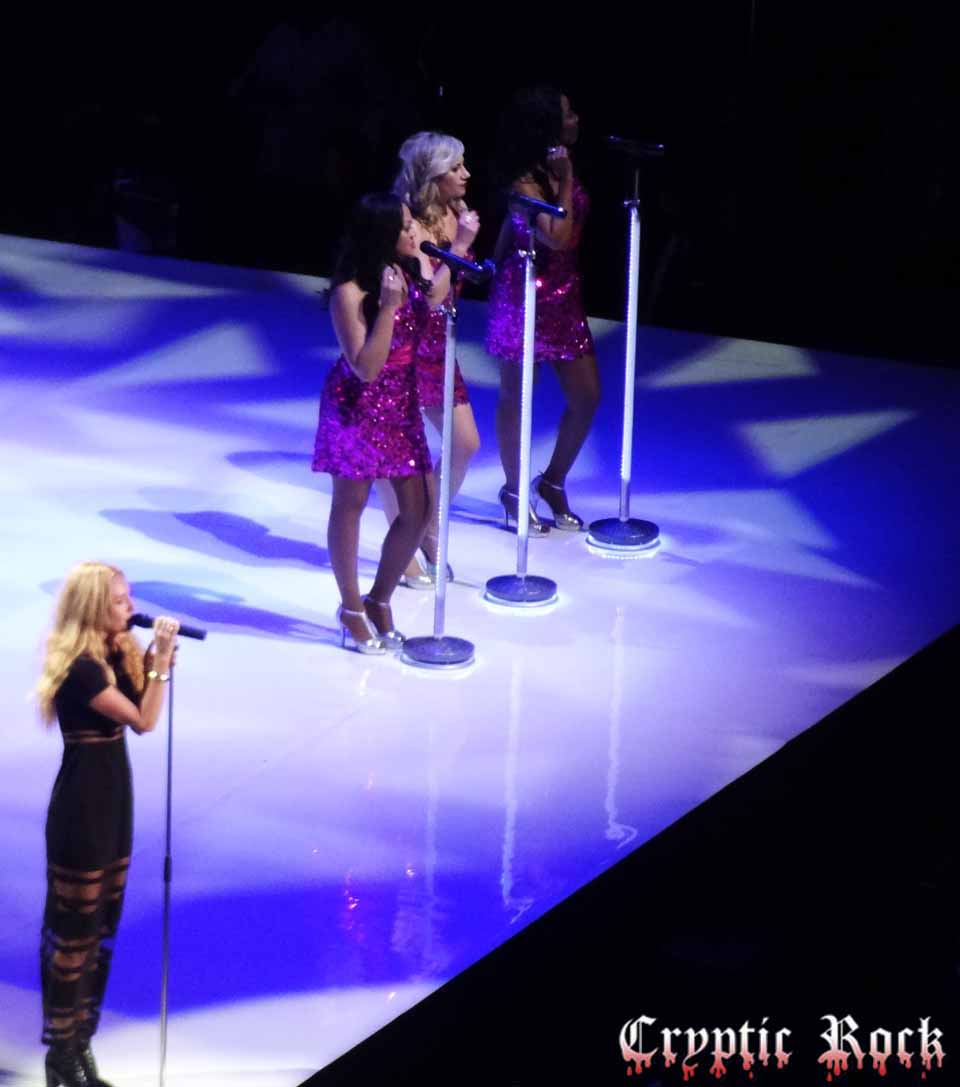 With the evening transition the band all came to center stage sitting on chairs with Stewart in the center for a special acoustic set. Adding a harpsichord the crowd was sent into a dream like sequence of instrumentation. Opening up the scene with “The First Cut Is The Deepest” Stewart voice continued to sound powerful and engaged in the performance. With a storyteller’s like vibe Stewart spoke genuinely with the audience and introduced the new life reflecting track “Brighton Beach”. Remaining center stage Stewart broke out perhaps the most played love song of all time in “Have I told You Lately”. Although originally a Van Morison track, Stewart has made it his own over the past 20 plus years. With Christmas right around the corner it was the perfect moment to mix in “Have Yourself A Merry Little Christmas”. Snow fell from the rafters for a little touch of holiday magic.

As the acoustic set concluded Stewart took things directly back into high gear rattling off a list of tracks including new song “Can’t Stop Me Now”. The new song sounded right at home in Stewart’s discography and was quite enjoyable to hear live. Allowing moments for his supporting cast to shine the band played Creedence Clearwater Revival’s “Proud Mary”, electrifying the Garden with soulful singing of Di Reed and the backup singers. Keeping the crowd attention all the way through with plenty of variety next was the timeless ballad, “You’re In My Heart”. It was another moment of pure love in the air as you could see couples of all ages swaying together to the music. There is no question Stewart brought his full energy to the stage and the performance of “Hot Legs” was the highlight of youthfulness. With a video of Stewart signing soccer balls which then went into a graphic saying each ball was signed by Rod. That is when the fun began and while singing the track Stewart kicked autographed soccer balls to all corners of the arena. Showing off his athletic skills it was truly amazing to watch him launch these balls and the distances they went. 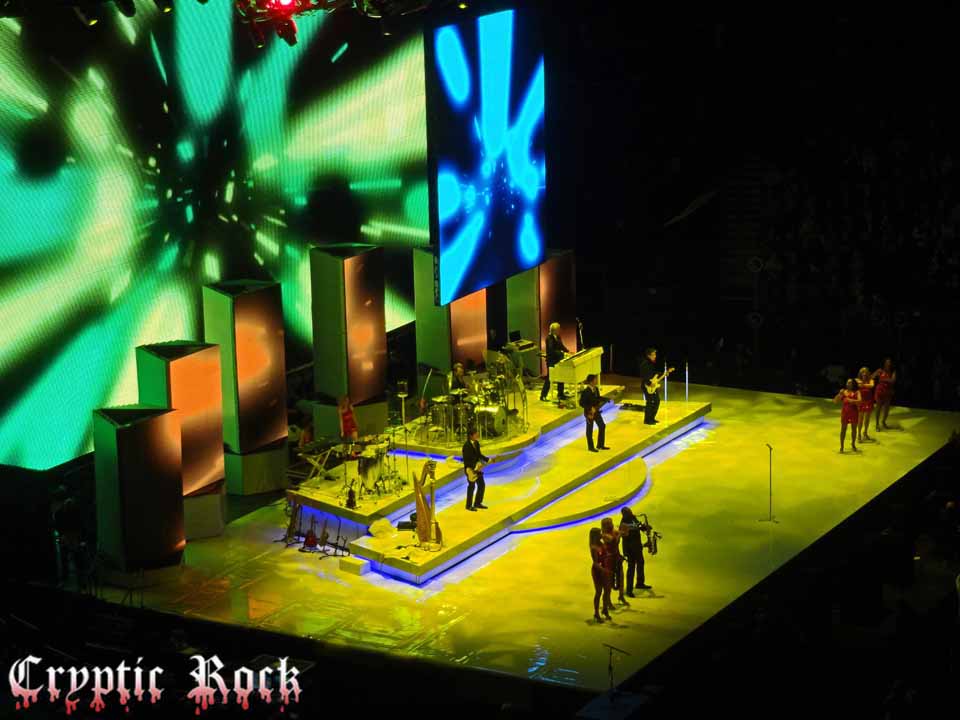 Having already been a very impressive stage show and performance the 21-song set closed out with fan favorite “Maggie May” and “Da Ya Think I’m Sexy”. For the grande finale a massive amount of balloons rained down on the crowd. Rod Stewart is without a doubt a rock n roll icon, proving to be inspired and enormously entertaining. The fact that he still holds passion, drive, and energy to move and sing at this level in a live concert is truly amazing.