The Room at the Top of the Stairs (Movie Review)

It is not easy telling a story which grips a reader or viewer, let alone a short one, but in just fifteen minutes Australian Writer/Director Briony Kidd does just that with her film The Room at the Top of the Stairs. Premiering at Los Angeles New Wave International Film Festival, Jennifer Kent, director of 2014’s highly successful The Babadook, mentored Kidd, adding even more weight to the talented production. Now available for streaming via Shudder as of February 6, 2017, more fans can witness the brilliance behind this little film.

Still from The Room at the Top of the Stairs

It begins with a young artist known as ‘the girl’ (Flannah de Rue: Jugular 2014, Can’t Win Do Try 2016) taking the first steps into adulthood by moving out of home into a shared house before she begins art school. The girl’s roommates, Sadie (Lucy Devine: debut film) and Amelia (Bryony Geeves: Titan 2014, The Kettering Incident 2016), welcome her and lead her to the room at the top of the stairs to her new home.

Previously occupied by Carmen (Katie Elphinstone: debut film), whose destructive legacy lives on with Sadie and Amelia despite her absence, the girl immediately feels a kinship with Carmen and the room. For some strange reason, rather than being shocked or angry like her roommates over Carmen’s former actions, the girl is drawn to follow in her footsteps. There is something about the room at the top of the stairs, but is it the girl who is possessed by the room, or is it the room that is possessed by the girl?

Still from The Room at the Top of the Stairs

The Room at the Top of the Stairs has a surreal, dreamlike atmosphere which leads the viewer along a twisted, haunted tale, leaving the reasoning open to interpretation. Kidd’s influences of the 1938 novel by Daphne du Maurier, Rebecca, and 1970s Horror movies is quite evident in the work. Helping the vision come to life, the cinematography by Marcus Dineen (Allt vi delar 2014, A Brilliant Genocide 2016) is masterful and works well with the music by Heath Brown (ABC’s of Death 2.5 2016, Breeding in Captivity 2016), along with the minimalist, but potent special effects.

Overall, The Room at the Top of the Stairs is a must watch for all fans of short, sharp, and effective films with a deeper message. As for Kidd’s future, her recent short Watch Me, written by Claire d’Este, is currently on festival circuit. Her next project is a feature film with Screen Australia produced by Catherine Pettman, so keep an eye out for this talented and promising director. Until then, CrypticRock gives The Room at the Top of the Stairs 5 out of 5 stars. 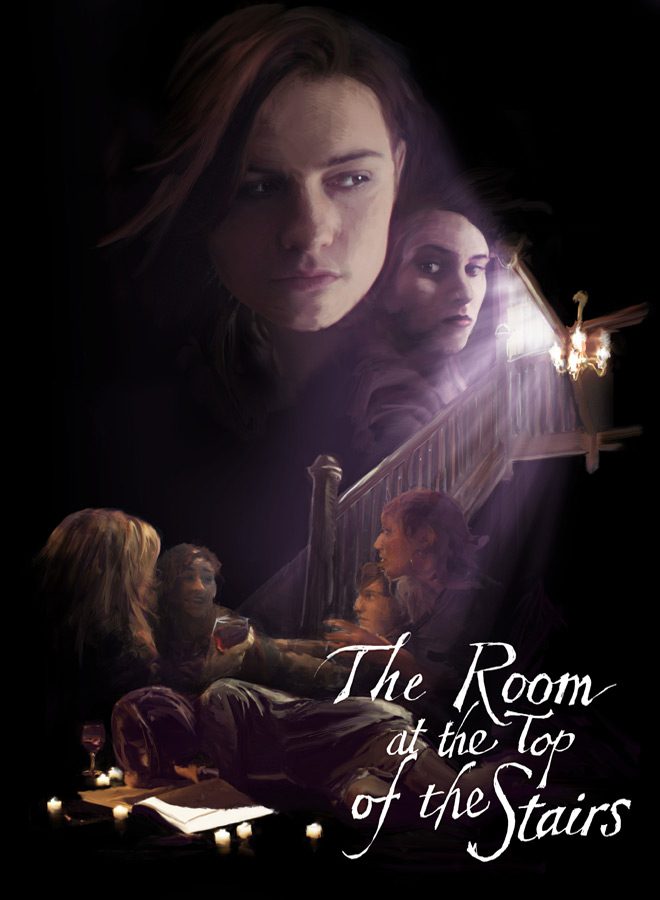