In the early 1980s, it was anyone’s guess where the tradition known as “Hip-Hop” would be taken. From DJ Kool Herc’s introduction of the Jamaican tradition of toasting to Gil Scott-Heron’s spoken word poetry to Afrika Bambaataa’s flamboyant fashion sense and push for social solidarity, the 1970s Bronx proved to be an auspicious milieu for the Hip-Hop culture. In 1981, however, a musical trio from Queens, New York called Run-D.M.C. formed that would forever change the face of Hip-Hop. Run-D.M.C. was comprised of two MCs and a DJ: Joseph “Run” Simmons, Darryl “D.M.C.” McDaniels, and Jam Master Jay, respectively. The group did in the early ‘80s what so many rappers afterward claimed to do: change the game. Run-D.M.C. ushered a new phase in the genre called the new school of Hip-Hop. This distinction separated acts like Grandmaster Flash & the Furious Five, the Cold Crush Brothers, and Kurtis Blow in the late ‘70s and early ‘80s from the new school that included names like EPMD, Eric B. & Rakim, and Gang Starr in the mid ‘80s. The old school was largely influenced by Funk and Disco and often included a backing band. Along with a few major releases by Run-D.M.C., the advent and wide distribution of drum machines like the Roland TR-808 and Oberheim DMX, which gave rappers a much more sparse method of production over which they can rap, set the stage for Hip-Hop for the future. This created a new backdrop for artists to showcase their poetry and rapping prowess. Run-D.M.C. were the first to do this.

The influence that Run-D.M.C. had on modern day Hip-Hop cannot be overstated. Their style had a profound effect on the Hardcore and Gangsta Rap of the future. Nas and the Wu-Tang Clan have Run-D.M.C. to thank for the slick, hustling image they could so effectively communicate. As far as the music itself goes, Run-D.M.C. broke barrier after barrier to brand an entirely new form of Hip-Hop. Some of the best records owing production credit to Bomb Squad and Scott La Rock has been directly influenced by Run-D.M.C.’s stripped back, minimalist production. The lyrical freedom pervasive on many of Run-D.M.C.’s records opened the door for Boogie Down Productions and Public Enemy to establish Conscious Hip-Hop by way of their socially and politically aware lyrics. KRS-One and Chuck D themselves have credited Run-D.M.C. to be major influences on their work.

The trio took the world by storm with the release of their eponymous debut in 1984. Several major departures from the old school were already present on this work. One of the most obvious changes in sound was not only the overt inclusion of an Oberheim DMX, but a heavy reliance on the drum machine. Songs like “Sucker M.C.’s” presented enabled Run and D.M.C. to rap over nothing but a bare-bones mechanical programmed drum beat and the occasional record scratch. Run-D.M.C.’s third record, Raising Hell, was so successful that it came to be one of the most defining records of Hip-Hop’s golden era. The album produced four colossal singles: “It’s Tricky,” “My Adidas,” “You Be Illin,” and “Walk This Way.” At this point in their career, they had successfully seized the public’s opinion of Hip-Hop and spun it one-hundred and eighty degrees.

Indeed, one of Run-D.M.C.’s most memorable features was their fusion of Rock and Hip-Hop. While 1981 saw Blondie’s “Rapture” and the Clash’s “The Magnificent Seven” integration of the two genres, it had not stuck as organically with the two Rock groups as it had with Run-D.M.C. On their debut, Run-D.M.C. had incorporated certain Rock elements, such as on the song “Rock Box,” but their 1985 sophomore LP, King of Rock, was truly the point in their career in which they found a commercially feasible method of fusing the two genres. This album, which is celebrating its thirtieth birthday this year, is an often overlooked album in Run-D.M.C.’s catalog. This incorporation of Rock in Rap was also mimicked at the same time by names such as LL Cool J, the Beastie Boys, and Ice-T. This trend that Run-D.M.C. began would years later influence the likes of Faith No More, Cypress Hill, and Rage Against the Machine. This phenomenon can even be found in numerous rapper/Rock band collaborations like Public Enemy and Anthrax, Eminem and Marilyn Manson, and Onyx and Biohazard. It can be easily argued that Run-D.M.C. had a wide enough influence to spark this generic convergence.

DJ Run aptly says in the title track that the music they are making is “all brand new, never ever old school.” This line gives the most insightful look into the movement that the album can muster. The heavy guitar riffs on this song, “You’re Blind,” and “Can You Rock It Like This” set a standard for the Rock-infused Hip-Hop that the Beastie Boys would mimic just a few years later. The use of the DMX is as prevalent on this album than ever, providing the basis for “It’s Not Funny” and “You Talk Too Much.” Run-D.M.C.’s influences can be felt throughout the album. “Roots, Rap, Reggae” showcases the group’s affinity for Dancehall, while “Jam-Master Jammin’” features a Billy Squier sample. The closing track on the album, “Darryl and Joe (Krush Groove 3)” features a beat written by the group Orange Krush, and easily sports the album’s most densely composed grooves that is comprised of a drum machine, samples, synth, scratching, and anything else available to the trio at the time. These elements make “Darryl and Joe” the perfect culmination of the album, incorporating the most important aspects of what came to be known as the new school of Hip-Hop.

Now celebrating its thirtieth anniversary this past January 21st, King of Rock is an album that set more precedents for the future of Hip-Hop than what is given credit for. Along with their groundbreaking debut and their golden standard third album, King of Rock established Run-D.M.C. as the true turning point in the history of Hip-Hop and opened the floodgates for the array of rappers to come for the next several decades. In addition to the claims of royalty purported by their sophomore album’s namesake, Run-D.M.C. are truly the kings of Rap. 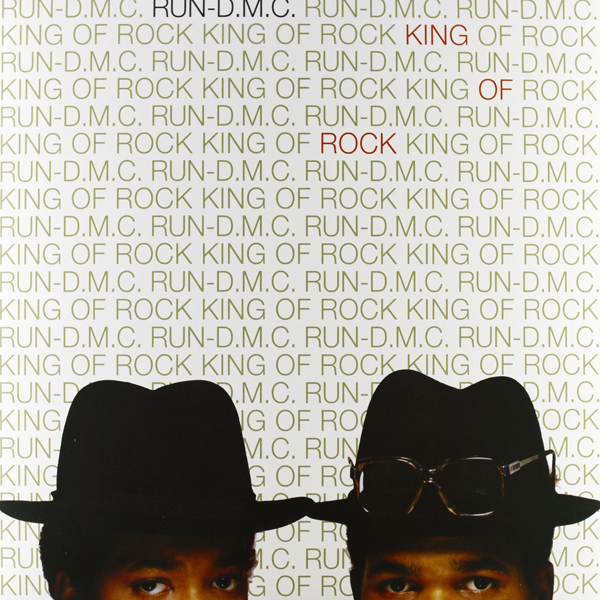