Rush is in a league all their own. Many have tried to follow but few have been able to come close. Originally formed in Canada in 1968, their musical style has changed throughout their forty-five plus year career, but what has not changed since 1974 is the band’s lineup. With Geddy Lee on vocals, bass, and keyboards, Alex Lifeson on guitars and backing vocals, and Neil Peart on drums and percussion, you have a powerful trio like no other.

Their first release in 1974, the self-titled album Rush was the only release not recorded with Peart. At the time of recording, John Rutsey was the drummer, but due to health reasons, Peart replaced him just two weeks before the United States tour to support the album. Peart not only brought complex musicianship to his instrument, but he also contributed as the lyricist on all the recordings since his first release with Rush for 1975’s Fly By Night. With the complexity in their literary lyrics and Progressive musical style, Rush offered the musical world something very unique.

While carving their niche and creating a name for themselves, on February 12, 1981, they released Moving Pictures. The album brought them to the mainstream and was one of the most noteworthy Rock releases that year. The album rose to #3 on the Billboard Charts and, by that Summer, one would regularly hear the album cranking from a Boombox at a party or any one of the seven tracks blaring from car radios as they passed by. Now thirty-five years later, the album remains to be Rush’s most commercially successful of their career.

Lee, Lifeson, and Peart started working on Moving Pictures, Rush’s eighth studio album, in August of 1980. With producer Terry Brown, they soon went into the recording studio, Le Studio in Quebec, and recorded the album over the months of October and November of that year. Due to some technical issues, there were some difficulties in recording the album, but the trio only ran three days behind on their schedule. Mercury Records released the album on February 12th the following year.

The first song to kick off the album is the drum and synthesizer driven song “Tom Sawyer.” This is one of Rush’s best-known songs and charted on US Billboard and UK Singles, reaching as high as #8 on Billboard’s Top Tracks. The song has been included in many movie soundtracks as well as being featured in numerous television shows and even a couple of video games. The lyrics were written in collaboration with lyricist Pye Dubois. With changing time signatures throughout the song, the music gives the lyrics the ground for “A Modern Day Warrior” to walk upon.

The next song, “Red Barchetta,” was the only one captured in the recording studio on its first take. The lyrics were inspired by a short story published in a 1973 issue of Road and Track magazine, “A Nice Morning Drive” by Richard Foster. This song, at just over six minutes long, tells a futuristic story of a young man’s exhilarating adventure with his Uncle’s car during a period in time when Classic Cars become illegal to own and drive. The music sways and curves, making the listener feel as if they are right there in the passenger seat.

“YYZ” is an energized instrumental inspired in part by the band’s hometown airport. The Morse code signal for YYZ, the IATA Airport Identification Code for the Toronto Pearson International Airport, is repeatedly played with multiple instruments as the introduction to this song. An extremely challenging song to play, multiple other recording artists have done covers of this song throughout the years. It was nominated in 1983 for a Grammy Award in the Best Rock Instrumental category.

The concluding song on Side One of the album is “Limelight.” Peart’s lyrics reflect his discomfort with the pressure and lack of privacy that comes with fame. Rather ironically, this song brought him and the band further into the limelight. It is another chart-topping hit having made it to #4 on Billboard’s Top Tracks as well as charting #55 on Billboard’s Hot 100. This song has been used in many movies and televisions shows. In 2010, it was inducted into the Canadian Songwriters Hall Of Fame.

Flipping the album over to Side Two, you find only three tracks. The fifth song on the album, “The Camera Eye,” is eleven minutes and one second long. Starting off to the sounds of a city street, Lee begins to take the listener into the scene with the synthesizers. The guitar, drums, and bass bring it up in tone and spirit as well as brings the listener the feeling of the hustle and bustle of the busy city streets. In essence, the song is in two parts, in two popular English-speaking cities, starting the listener’s’ journey in Manhattan and then taking them to London. Beginning with chimes and then chanting, there is a haunting feeling to the next song, “Witch Hunt.” The guitar kicks in and the lyrics take the listener on a hike, “On a lonely torch lit hill.” But the closing lyrics, “Quick to judge, quick to anger, slow to understand. Ignorance and prejudice, and fear walk hand in hand,” speaks to not closing one’s eye to what they may perceive as mysticism, but to open their mind and not go on the hunt to destroy what they may not fully understand.

“Witch Hunt” became part of a series of songs Rush released on different albums. The series is known as the Fear series, which includes “The Weapon” from 1982‘s Signals, “The Enemy Within” from 1984’s Grace Under Pressure, and “Freeze” from 2002’s Vapor Trails. The final song, “Vital Signs,” had a much different feel to it then the other tracks on this album. With somewhat of a Reggae style to it, it had a structured pulse. Encouraging the listener not to fall into conformity, the song ends with empowering repeated variations of the lyrics, “Everybody got to deviate from the norm, everybody got to elevate from the norm.”

True to the overall complexity of the band, even the album’s cover art had dimension, it is a monument to triple entendre. At first glance, consumers see men from a moving company moving pictures of fine art. Although, if they take a closer look, they will realize the depth of the art they are seeing emotionally moves the people on the street. Then, turn the cover over and view the back, to see that the whole scene is being filmed for a movie.

Due to the timelessness of Moving Pictures, it is hard to consider it a period piece as it does not fit the style of the era in which it was released. That is part of what made this album such a special and intricate part of the body of work the band has produced over the twenty albums it has released over its career. While 2015 squashed rumors of the band calling it quits, according to Lifeson that is not so. Although, he cited that world tours would not be as expansive as they have been in the past. Nevertheless, Rush fans will continue to hold on to hope that they will continue to record and possibly do some touring, but no doubt always turn to this masterpiece known as Moving Pictures. 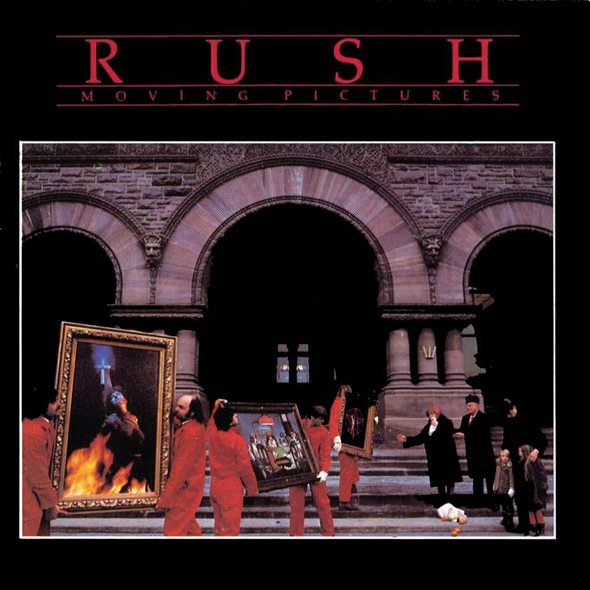