Canada’s Rush is a curiosity in the annals of classic rock. Most people are divided into two camps when it comes to the power trio. People either cannot stand them, or they have an unhealthy obsession with the band. It appears the latter group contains an enormous amount of people considering that the band has sold out arenas for over forty years, has sold over forty million albums, and has a streak of gold and platinum records surpassed only by The Beatles and The Rolling Stones. In 1974 Rush delivered their self-titled debut featuring bassist Geddy Lee and his trademark high-pitched vocals, Alex Lifeson on guitar, and John Rutsey on drums. Rush featured a bluesy Hard Rock mix reminiscent of Cream, Led Zeppelin, and The Jimi Hendrix Experience. The record was released by the band on their own Moon Records label. After a Cleveland radio station put the band’s blue collar anthem “Working Man” into its rotation, Rush was signed by Mercury Records. Rutsey was then replaced by drummer Neil Peart. The addition of Peart would take the band to a whole new level both musically and lyrically on their sophomore album, released February 15th 1975, entitled Fly By Night.

Now marking the fortieth anniversary of record, Fly By Night stands as a turning point for Rush’s career.  Not only did the addition of Peart mean they now had a drummer who would go on to be regarded as one of the best to ever pound the skins, but Peart also took over as the band’s lyricist.  Peart penned tales, weaving in Science-Fiction and Fantasy, while still focusing on the age-old literary themes of loss, fear, adventure, and love.  While the band’s self-titled debut two years prior featured straight ahead Blues-tinged Rock-n-Roll, Fly By Night found the band perfecting a blend of Hard Rock, Blues, Heavy Metal and Prog. This style of music, along with the lyrical subject matter, would propel the band to international superstardom. Taking the leap away from the basics and into hard-hitting Progressive music allowed the band to release the album 2112 a year later, which would take the band to even further heights around the globe. Having Peart take over the lyrics, and Lifeson not playing in as heavy a manner as he did on the debut, a significant change in sound led the band to take its place among the most popular on the scene from that point on. Four decades later Rush still sells out stadiums and arenas around the globe, and  in 2012 released Clockwork Angels which hit #1 on the Canadian charts and #2 on the U.S. charts, marking the band’s twentieth studio to at least reach gold status.

Rush rolled the dice and tried a new style with Fly By Night, and throughout their career, the band has continued to evolve. In addition to bass and vocals, Lee now also incorporates keys into a number of their tracks. This willingness to experiment, which began with the recording of Fly By Night, has kept Rush fresh, while most acts who debuted forty years ago continue to rehash the hits, very rarely releasing new material — or at least relevant new material. Stepping aside, and in this case, up, from standard Blues-based Hard Rock, Fly By Night found Rush stretching out musically with intricate interplay between the trio. While still churning out Hard Rock riffs, their technical ability was displayed prominently throughout. Lyrically, instead of singing about the worn out topics of booze, drugs, love, and fast women, the band took on social issues, both personal and prevailing, personal stories, and travelogues in an exciting mix of straight up Hard Rock and delicate melody.

“Anthem” sets the stage for Fly By Night with a heavy guitar/bass riff in which Peart plays right along with the guitar; rather than keeping the time, he matches the guitar note for note. This is an interesting take on the usual function of the drummer, which is to be the steady voice of reason for the band. This is continued throughout the song, and Lifeson and Peart play in sync on the break beats between verses as well. Lifeson then puts forth an absolutely shredding solo accompanied by a bouncy counter punch by Lee on bass. Lyrically, the song pushes the righteousness of being selfish as Lee sings, “Well I know they’ve always told you/selfishness was wrong/yet it was for me, not you/I came to write this song.”

“Best I Can” again features a churning, heavy, simple riff. The bass line plays right along with it, and the drums, for Rush, are relatively subdued, save for the fills, where Peart shows why he is mentioned in the same breath as Bonham, Moon, and Baker. The fills are undeniably powerful, while never demanding attention and never over-shadowing the sleek guitars of Lifeson. It’s a study in subtle power.

“Beneath Between Behind” starts off with a languid riff that is complemented by cymbal crash after cymbal crash and expert hi-hat work that make for a relentless track packed with frenetic energy and rapid fire guitar riffing with an almost honky tonk edge at times, only to fall back into perfect Hard Rock.

Penned by Peart, “By-Tor and the Snowdog” was Rush’s first foray into Fantasy/Science-Fiction/religious lyrical content, and also the first track that detractors would label “self-indulgent” as it clocks in at over eight minutes and features lyrics such as “Tobes of Hades lit by flickering torchlight/the netherworld is gathered in the glare/Prince By-Tor takes the cavern to the north light/The sign of Eth is rising in the air.” The opening verse is followed by almost five minutes of somewhat repetitive guitar, bass, and drums, while at around the five minute mark, the music comes to a snail’s pace and features single bass notes spread far apart, airy effects-laden guitar, and intermittent drums that are buried deep in the mix, sounding like a bloody battle hymn. This then gives way to plodding drums, and a sparse guitar riff over which is played a stretched out, meandering solo. The song then returns to its starting point with fast paced music and anthemic singing. This song embodies what so many love about Rush and what so many hate.

The title track follows, and it is ’70s Hard Rock/Metal perfection. Opening with a guitar lick that melds the best of early Aerosmith, mid-70s Led Zeppelin, and early AC/DC, Fly By Night rightfully has become a staple on Classic Rock radio. In addition to the stellar guitar work, the song features a slowed down middle section with Lee showcasing his unique voice over soft guitars and jazzy drums for a tasteful interlude. The song then takes right back off with crunchy guitars and pounding drums. This track embodies so-called Arena Rock. Besides the massive appeal of the music, it tells the story of life on the road.

“Making Memories” is a fascinating track for the band, especially on this album that, up to this point, was strictly heavy guitars and pounding drums. Here, the band composes a fast moving acoustic melody with simple drums. Again, life on the road is the theme here as Lee sings plainly about life in a band: “there’s a time for livin’/behind us you will only see our dust………./no reason to be sad/maybe road life’s not so bad.” The quick acoustic foundation is punctuated throughout with surprisingly aggressive soloing on electric guitar that is placed perfectly low in the mix so as not to overpower the brilliant acoustic track the song is based on or the workman’s beat laid down by Peart.

Album closer “In The End” again finds Rush starting things off with laid back acoustic chords and sparse drums. Here, Lee shows he can do more than scream in high octaves over blistering guitars as he sings in a laid back manner for the opening section. Just shy of the two minute mark, the band knifes through the quiet with a spaced out riff plugging along at a medium pace and Lee goes back to his signature, high-pitched singing. Here, Rush delivers what all power ballads aspire to. While the music is not full of piss and vinegar, it is not light by any means. The band finds a way to slow it down, but keep its Hard Rock edge throughout. With riffing that is certainly on the slow side, “In the End” still has depth and punch.

Fly By Night would be followed that same year by Caress of Steel, which failed to match its predecessor’s success as the album was inconsistent and found the band really “out there.” However, 1976’s 2112 would prove to be an all-time classic, and the band never looked back as they moved toward becoming one of the biggest bands in the world. If anyone is looking for an album to get his feet wet with Rush, this is the one. It showcases all three members’ incredible musical gifts and diversity, the band’s propensity for quirky, yet intelligible lyrics, and a breadth of sound that few can rival. 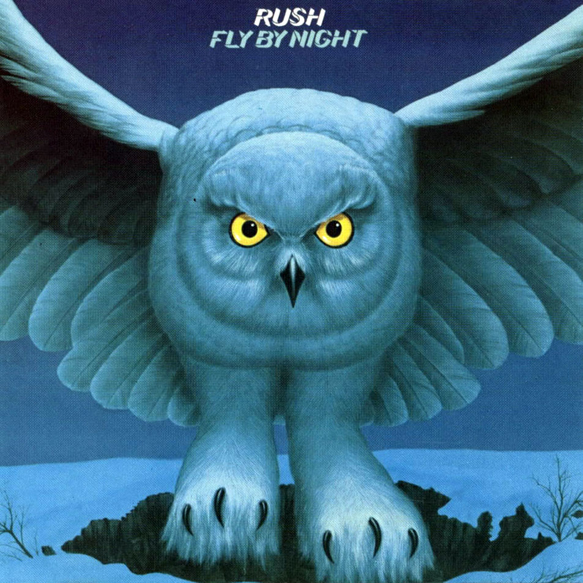