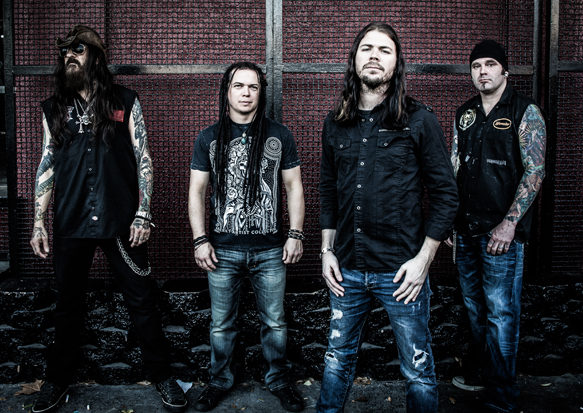 Memphis Tennessee’s Saliva are perhaps one of the most underrated Hard Rock bands of the last two decades. With early success back in 1997 upon their self-released and self-titled album, they were quickly locked up by Island Records. With unlimited potential, they released their major label debut Every Six Seconds in 2001, an album that spawned anthemic Rap Rock crossover hits such as “Click Click Boom” and “Your Disease.” While tracks such as these exploded on the radio with their sleek and catchy sound, those who paid closer attention realized that this was much more than just another Rap Rock band.They had Rock-n-Roll chops thicker and more pronounced than others on the scene and they further proved so on 2002’s Back into Your System and 2004’s straight-up ass-kicking Survival of the Sickest.

Giving Rock fans everywhere many more years of solid music laced with heavy guitars, incredible songwriting, and awesome vocals, Saliva has pumped out album after album over the past twenty years without a hiccup. Speaking of such, they even survived their biggest challenge when in 2011, after fifteen years as their frontman, Josey Scott stepped down. Where some bands may pack up shop and call it a day, Saliva sought out a new vocalist and fortunately struck gold with Bobby Amaru, who joined up in 2012. Winning over fans, Amaru shined on his debut with the band back in 2013 with the album In It to Win It, later re-released in 2014 under the title Rise Up. A bold introduction, sometimes a few years with a band is the best medicine for even more chemistry and now in 2016 Saliva return with their ninth overall studio album, Love, Lies & Therapy. With original guitarist Wayne Swinny, long-time drummer Paul Crosby, joined Amaru and former Shinedown & Fuel bassist, Brad Stewart, Saliva are out to show why they still are at the top of their game upon the release of Love, Lies & Therapy June 10th.

Beginning with a stomping beat and steady guitars, “Trust” is united with crashing drums as well as Amaru’s voice crying. The beat continues on for a few bars then calms for the verse as a guitar riff makes up the bridge, and whispering vocals break in. Then comes “Tragic Kind Of Love” which opens with warped out drums and lead guitar work from Swinny before the beat changes entirely to a slower tempo. Keeping the energy high, “Bitch Like You” starts off with the drums and crushing guitar creating a hard driving sound before Amaru jumps in with gritty voice to accompany lyrics that are unforgiving in their accusations. Quieting down in the bridge briefly, the song returns to a catchy and heavy sound in the final minutes that will have fans banging their heads.

Changing up to a more mellow style, “Unshatter Me” opens with a gorgeous acoustic guitar strumming before it picks up with electric guitars that continue on side by side with the acoustic guitar.The lead and backing voices then join together for a haunting, dramatic effect. Then with a addictive, dancing melody “Broken Wings” sees an electric guitar fluttering before quickly taking on muscled tones, only returns to the lighter beat on the second verse. With lyrics filled with anguish, regret, and frustration, it is a song that will have fans yelling along word for word. Speaking of yells, Amaru assertively brings in “Rx” with “I’m losing everything, call a doctor!” before the head banging vibe kicks in. Struggling with loving the wrong type of person, the song takes on the attitude of it’s lyrics, looking to kick the disease. Once the dust settles “Break Down” brings back quiet acoustic guitars met with a melancholy beat. Complimented by backing vocals that add a depth, a strong violin hovers in and out of the track for a beautifully orchestral instrumentation that will cause chills to anyone who listens.

Sticking to their larger than life guitar sound, “Go Big or Go Home” brings back a hard driven sound as Amaru chimes in a raping verse before bounce back to a Rock styling and back again. It is the type of track one would imagine hearing within the play of Every Six Seconds, and is just as potent. Fading in with an acoustic guitar open “The Loneliest Know” before Amaru brings in a soften voice that are met with vivid backing vocals for a layered sound. Picks up slightly with an electric guitars, the words will resonate within the soul of anyone who has ever regretted decisions of their past. Then in Saliva anthemic fashion “Refuse To Lose” begins with sounding siren and a heavy beat. As the tension builds Amaru belts out the inspiring words ” I refuse to lose!” A phrase that is bound to get anyone’s blood flowing the verse to follow is a shout-out, take no prisoners battle cry.

Fitting perfectly within the sound of the album, Saliva offer a cover of Michael Jackson’s protest song “They Don’t Care About Us.” Slight warping and electric guitar set the song as dramatic, echoing vocals come in give teeth to the unforgiving words. The signature drums from Jackson’s original remain a focal pint as Saliva does the under appreciated Jackson track justice, preserving the message of the injustice many people face daily by governments meant to protect them. This is followed by album closer “Hand In Hand” which features a sad acoustic guitar that is soon joined by Amaru’s emotional voice, drums and an electric guitar in a harder beat. Diverse, track is reinforce by the heavyhearted feeling that sums up the ride that is Love, Lies & Therapy.

Saliva’s Love, Lies & Therapy is an album that feels confident and fresh. Each track tells a story, and the band’s talent illustrates that story beautifully with strong guitar work, and diverse vocals. A more cohesive album than Rise Up, the transition to the Amaru era has been rather seamless and anyone who threw Saliva by the waste side, need to revisit them immediately. CrypticRock gives this album 5 out of 5 stars. 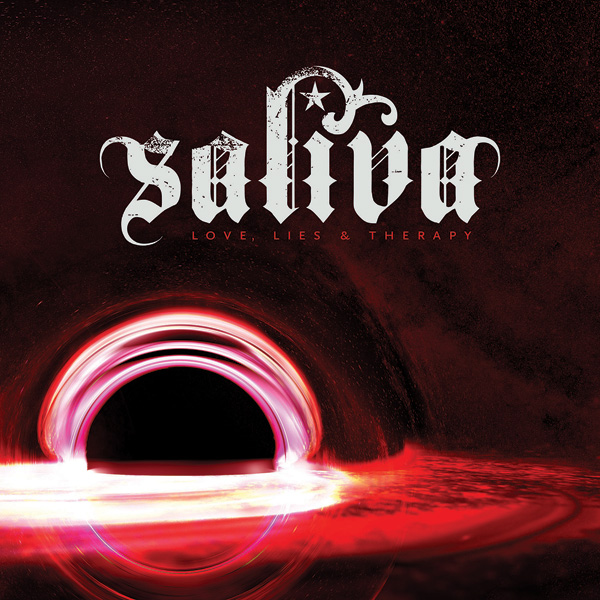