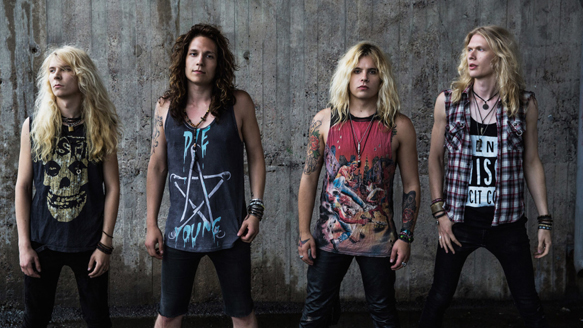 Formed in Helsinki, Finland during 2007, Santa Cruz are a solid Hard Rock band inspired by ’80s heroes Guns N’ Roses as well as Skid Row. Still in their teens at that time, Archie Kuosmanen (Vocals/Guitar) and Johnny Parkkonen (Guitar) were soon joined by Middy Toivonen (bass), but it took eighteen months and two more drummers until they finalized the line-up with Taz Fagerström (drums). It was the band’s impressive stage presence that grabbed the audiences, and they soon earned a reputation as a hard working band. However, it was their EP Anthems for the Young ‘n’ Restless that brought them to the attention of Spinefarm, resulting in a worldwide record deal in 2012.

After extreme recording sessions, the debut album, Screaming for Adrenaline, was released in 2013 and took them into the top 40 of the Finnish album charts. To quote the Cesarian lyrics of “Relentless Renegades,” Santa Cruz definitely delivered on the “we came, we saw, we conquered” mentality. They then signed with the TKO agency which enabled them to tour the UK, Germany, and Belgium as well as launch their sound on new audiences, including supporting their heroes Skid Row on tour. Amongst the battery of touring, and their first visit to North America, the band began work on another explosive piece of Glamcore. Now in 2015, they release their second album, the eponymous offering including the most aired song of 2014 on Finnish station Radio Rock, “We Are The Ones To Fall,” it is time for Santa Cruz to go worldwide.

“Bonafide Heroes” mixes elements of heavy, beefy riffs and chords with melodic choruses as well as plenty of attitude and anger. It captures the raw excitement that early Skid Row had for music, a sense of rebellion, and a refusal to accept less than they deserve. “Velvet Rope” continues with the anger and the energy, the gang vocals give it a huge sound, the guitars grind out the music, and the drums frame the rhythms perfectly. “My Remedy” screams the need to be heard live, with an audience chanting the chorus, this is perfect for huge arenas and stadiums. The youthful exuberance of “6(66) Feet Under” follows. The electronically enhanced vocals add interest while the guitars soar. Furthermore, it does have its softer moments, showing Santa Cruz are more than just angry young men.

“Bye Bye Babylon” has some brilliant harmonies and less venom than the previous tracks; a beautiful guitar solo and some delicate tones. “We Are The Ones To Fall” is meant as an anthem for the modern youth, but rather unfortunately, the ‘eh oh, eh oh’ will bring to mind the Teletubbies (’90s children’s tv) in the UK, they should get away with it everywhere else though. “Wasted and Wounded” follows, a rallying cry that should win them an army of fans. The rebellion theme continues in “Let Them Burn.” The aggression and passion runs strongly throughout, something that will appeal to the under-appreciated generation they represent. “Vagabonds (Sing With Me)” is another rallying cry that will have the audience joining in with gusto live, fast and furious at times, full of vigour and life. Lastly, “Can You Feel the Rain” begins with atmospheric sound effects. Harrowing sounds break into delightful harmonies and melodic refrains; softer and more soulful, the anger gives way to gentle regret.

The influence of Skid Row is certainly obvious. Memories of their impact and the excitement they drew live, Santa Cruz take the baton of the old guard and bring it to a new generation who were not even born when Skid Row first hit the Rock world and shook its angry fist in the air. This has that same sort of raw energy and freshness; a sense of defiance and unifying mutiny. The guitars are rich and flip between a grungy, hard-edged sound and a more ’80s grandeur. Accomplished musicianship give the songs a quality beyond their years. This is a band that need to be seen live. Something about this music shouts that these are going to be huge stars before very long. One word of warning, for those sensitive types, the lyrics include swear words which might offend some. CrypticRock gives Santa Cruz 4.5 out of 5 stars. 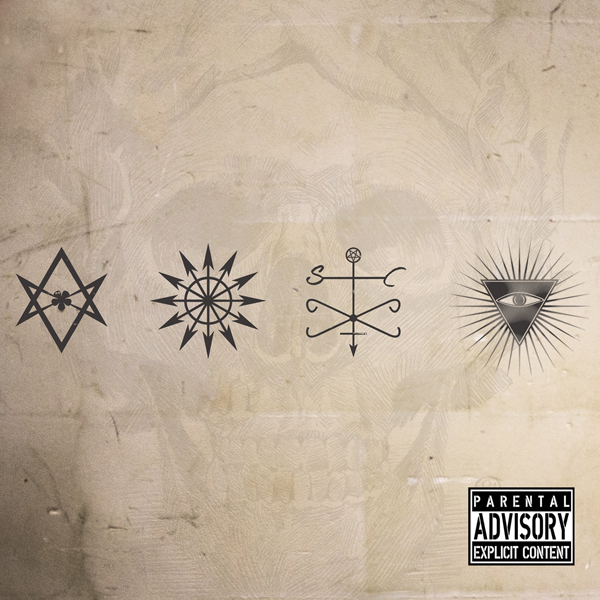