Some college kids are renowned for doing crazy things on spring break, and doing stupid things under peer pressure. When the two are combined, it can get them into a lot of trouble and is often used as fodder for storymakers. It is also the basis of latest Horror film Satanic, written by Anthony Jaswinski (Kristy 2014, The Shallows 2016) and directed by Jeffrey Hunt (CSI series, Scorpion series). Not to be confused with the 2006 Horror film of the same name, Hunt’s Satanic was released on October 4, 2016 on Blu-ray, DVD, and Digital HD via Magnolia Home Entertainment. Billed as from the producer of The Walking Dead, David Alpert’s production company Circle of Confusion is credited, making this film immediately of interest to viewers. 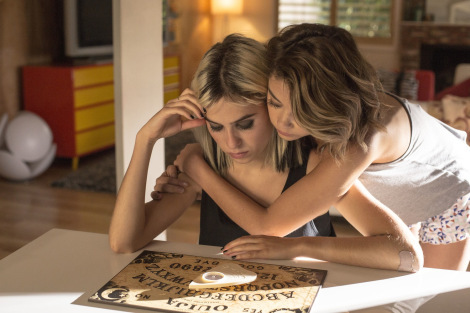 Set in modern times, the story focuses on four college students; Chloe (Sarah Hyland: Modern Family series, Vampire Academy 2014), her boyfriend David (Steven Krueger: The Originals series, Goosebumps 2015), Chloe’s cousin and best friend Elise (Clara Mamet: Wiener-Dog 2016, Neighbors 2: Sorority Rising 2016), and her boyfriend Seth (Justin Chon: Twilight film series, 21 and Over 2013), are on a roadtrip to Coachella on spring break. Along the way, they stop in L.A. and go to all the homes that infamous satanic murders have taken place, including the Tate/Polanski home. Chloe and David are more straight-laced, and not as interested and Elise and Seth, but go along with them. Elise has also booked two nights for them to stay in a motel room where a woman once killed herself as a sacrifice to the devil.

On the way to finding the hotel, they get lost and stop outside a group of abandoned buildings. Chloe sees someone screaming through a window in an upper floor like a crazy person and, amused, takes a photo. Nonetheless, the four end up in the motel excited for the rest of the trip. The next day, the group also visits a local satanic book shop out of curiosity. The hostile shop owner, Anthony (Anthony Carrigan: The Undying 2009, The Forgotten series), is dismissive and the group leave deflated. However, Seth suggests they follow the guy to see what he actually does on his time off. In David’s van, they follow Anthony home and, by snooping around, Seth video tapes their adventure with his phone. Not content with seeing nothing outside, they go right up to the house and witness a satanic ritual where it appears a young woman is about to be killed. They all yell out to save the woman, which of course brings the wrath of the cult.

Chloe, David, Seth, and Elise manage to escape back to their hotel room unscathed, but Seth soon realizes he has dropped his phone. The next morning, Chloe is woken by the young woman they had saved last night, Alice (Sophie Dalah: Unbroken 2014, Applecart 2016), calling from Seth’s phone. The four meet Alice at a coffee shop and she returns Seth’s phone. It gives them the opportunity to ask Alice what happened. She reveals they were not trying to kill her but were removing her from their cult. Nevertheless, as she has no place to go, Alice plans on leaving LA the next day. This prompts Chloe to convince the others to let Alice stay with them for one night.

At first, everyone has a few drinks and a good time. Alice seems quite in touch with the room’s dark past and has a great time, pushing the boundaries too far a couple of times. Despite this, Alice talks Chloe, David, Seth, and Elise into doing a ritual, which ties them together. They form a circle and all hold hands. After some chanting, Alice gets up and draws a pentagram on the wall, numbering each point 1 -5. Not content with freaking everyone out, she offends everyone in the room and they demand she leave. Instead of leaving, Alice tells them they will soon join her and kills herself. This is deeply traumatic to the four and they are forced to stay longer than planned to cooperate with the police investigating Alice’s suicide, the second in the same room.

The next twenty four hours are mentally brutal for Chloe, David, Seth, and Elise, pushing them to their brink. If it was not enough, almost as soon as Alice dies, strange things begin to happen, particularly unexplainable damage to property. At first, David is convinced it is Anthony and his cult getting back at them, but when he confronts Anthony, they discover the real reason they threw Alice out – she was too hardcore, even for them. After a series of increasingly disturbing events, all four agree to leave town before things get worse, despite being required to stay. Before they leave town, Elise becomes quite sick, and from then on, their worlds changes and they enter a hell on Earth they may not escape from, all after helping who they believed to be an innocent young woman. Now, the photo Chloe took on her phone when they first arrived turns out to be horrifyingly prophetic, but will it help them survive what is coming for them?

Unfortunately, Satanic has received mostly bad reviews largely due to the high level of cliche moments, characters, dialogue, and unrealistic plot in the first half. However, the moment Alice appears on the picture, the entire movie does a 180 turn into something awesome. The second half of the film is outstanding and, in some ways, feels like a completely different story. It is edgy, dark, foreboding, and downright creepy. If in the first act the cliche parts were removed and instead of the scene in the Satanic shop, the group came upon the ritual with Alice by chance, it would push the whole film into the next level. In fact, it is almost as if two different people wrote half the movie each. 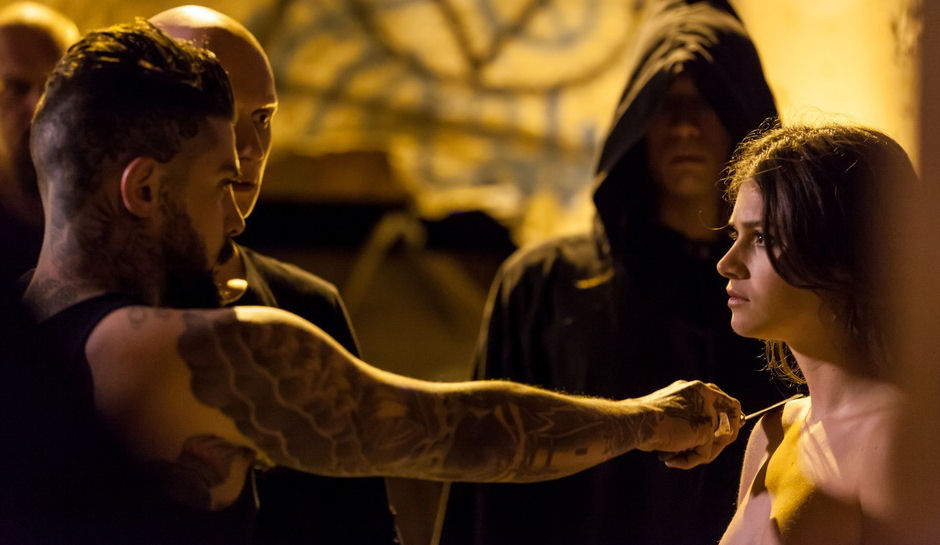 While the addition of Hyland from ABC’s hit series Modern Family will attract younger audiences, the cliche fillers will turn them off again. The trouble with movies like this is, with technology and our desire to have things right now, if a movie is boring for the first half, chances are most viewers will not stick through the next half. In this case, that is a terrible shame. All this in mind, the cinematography by Mike Karasick (Easy A 2010, Friends with Benefits 2011) is sharp, and captures the atmosphere even while the plot does not. This is while the special effects and pacing are excellent. It may not be everyone’s cup of tea, but the second half of Satanic makes the journey well-worth the while. CrypticRock gives Satanic 3 out of 5 stars. 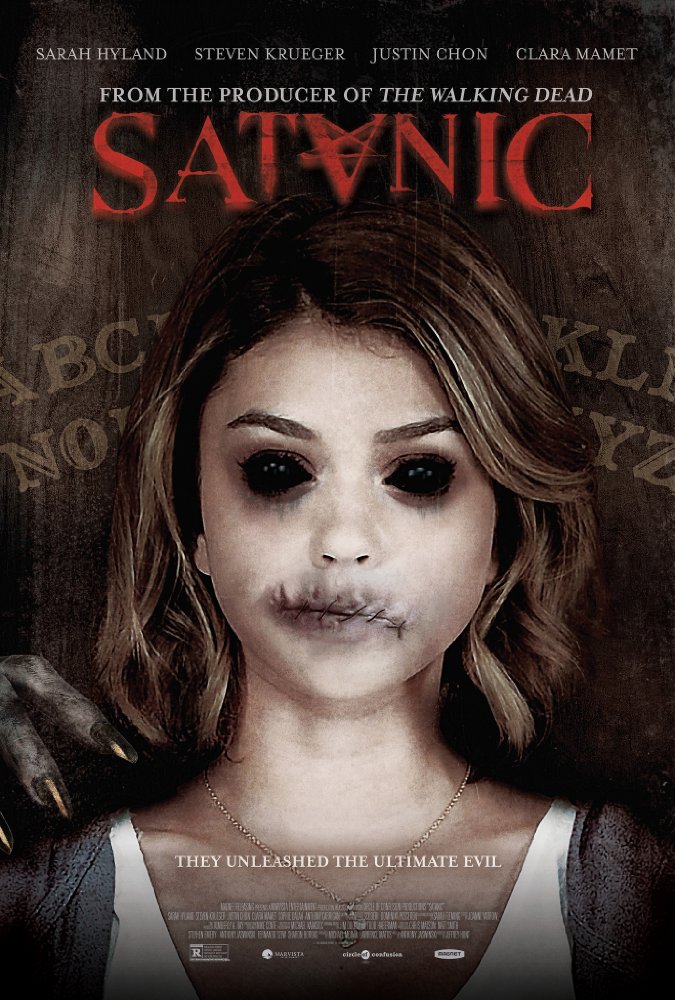