Out of the ashes of a few toasted churches in Norway, Black Metal has risen to new levels of hell and damnation that has not only garnered wanted attention but has also seen the unwanted variety in the perils of modern day. Deriving from the early 1990s, one majorly unique and influential Black Metal band, Satyricon make an epic return to North America after 9 seemingly endless years of fans waiting.

Originally, this tour was meant to have direct support from Black Metal duo Inquisition, however, unforeseen complications would lead to Goatwhore stepping up to the Heavy Metal plate as a worthy replacement. With a headbanging lineup cemented, the 15 date tour kicked off in Los Angeles, California at The Regent Theater on Sunday, May 13, 2018. A very sold out show, an anxious buzz mounted as everyone was on the edge of their seat awaiting the long overdue return of the mighty Satyricon on American soil.

Helping kick off the opening night of the tour on a high note, 2 local openers were on hand – Mictlantecuhtli and Highland. Both bands range in the Black Metal realm, they could do no wrong for the constantly emerging scene as they were a fitting add on to the already exciting bill. Then, as the crowd grew larger and anticipation grew stronger, Goatwhore fired up the crowd with their typically aggressive setlist featuring hit songs “Vengeful Ascension,” “Mankind Will Have No Mercy,” “Apocalyptic Havoc,” and, of course, fan-favorite that no setlist would be complete without, “FBS.” Ask any fan the true title of that song and they will instantly sprout devil-horns and shout out the meaning behind that acronym.

Within ten minutes of take off into Goatwhore’s set, the pit was enraged, and the lone brave crowdsurfer had their 15-seconds of fame followed by a well-deserved push to the disrespectful agitator. As that aggression came pouring out, it can most certainly be attributes to Goatwhore’s sound, which is an ideal blend of Black and Death Metal at the perfect pace and pitch. This combined with a stage presence that was at an all-time high from badass Lead Vocalist L. Ben Falgoust II, shredder Guitarist Sammy Duet, wild man Drummer Zack Simmons, and live Bassist Robert Coleman, chaos ensued.

With their latest album, Vengeful Ascension, released last year, and their fairly-constant touring due to demand and popularity, they did not offer much new in terms of tunes. However, as previously mentioned, their dynamic on stage only grows with energy and dominance. Therefore, no matter how many times fans see them in live action, they never grow tired or bored as the musical fight gets more and more feisty each time. Although Goatwhore and Satyricon are very different bands, they worked very well together as a tour package, and hopefully the billing will lead Goatwhore to an even more glowing fire of popularity. 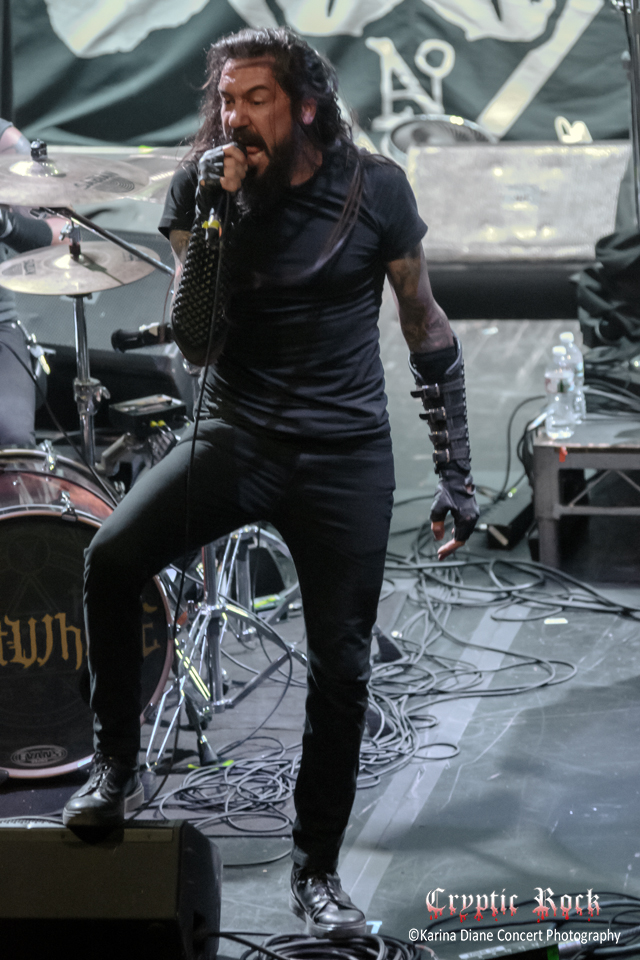 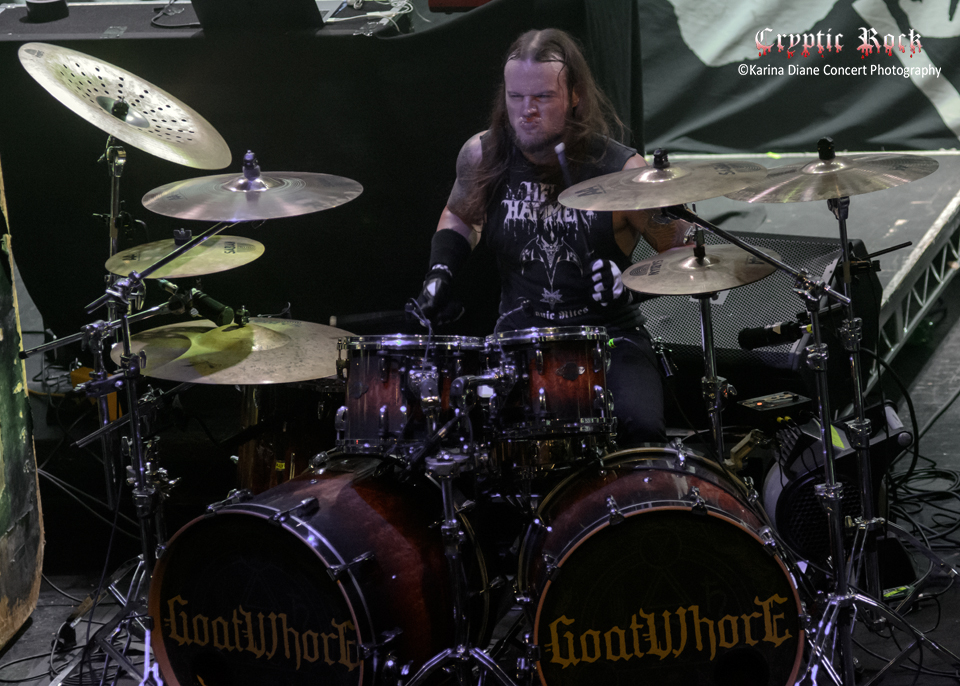 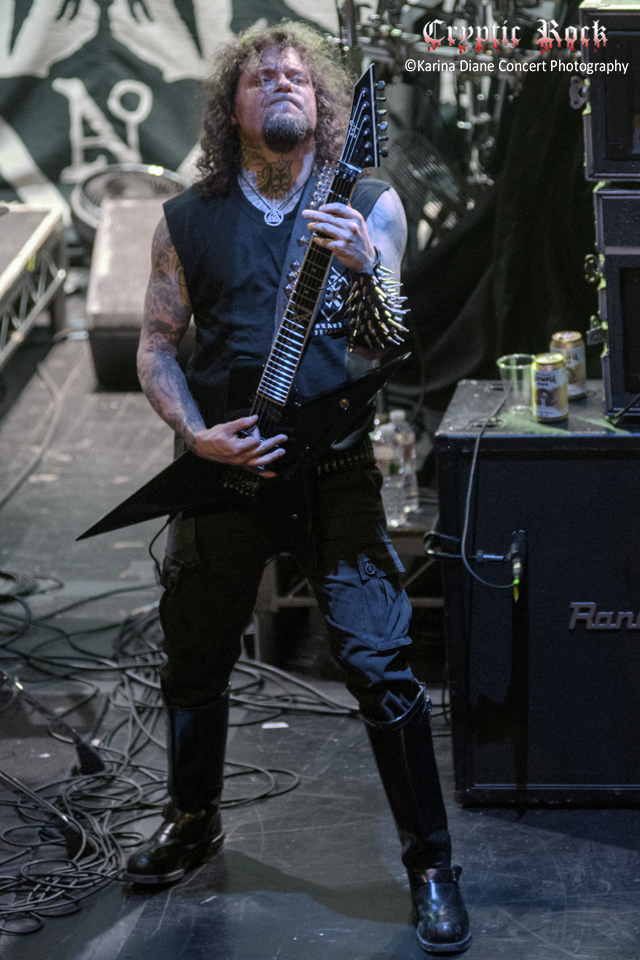 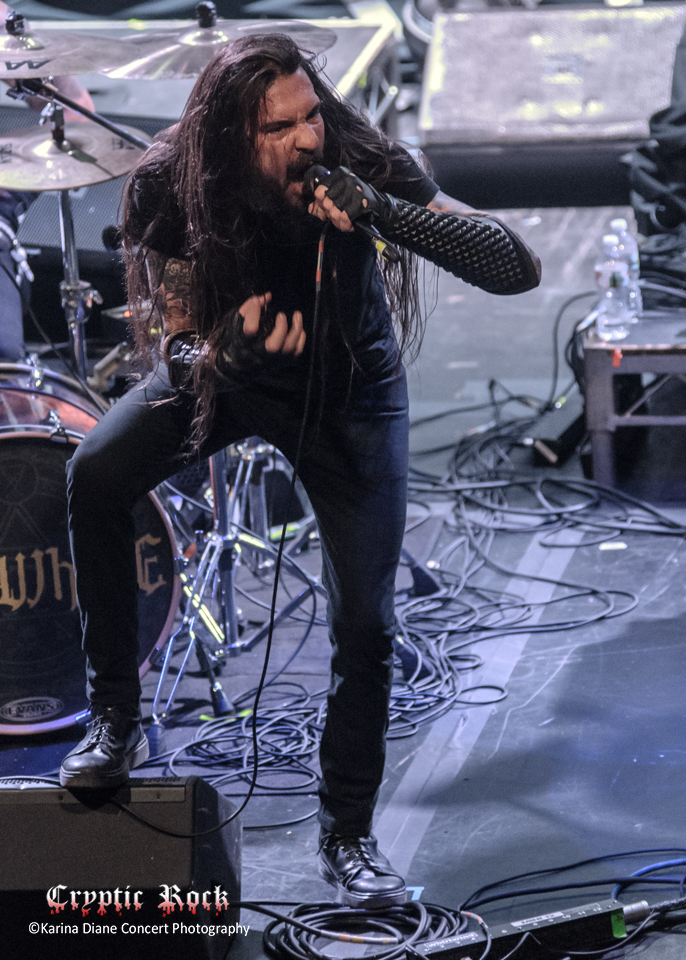 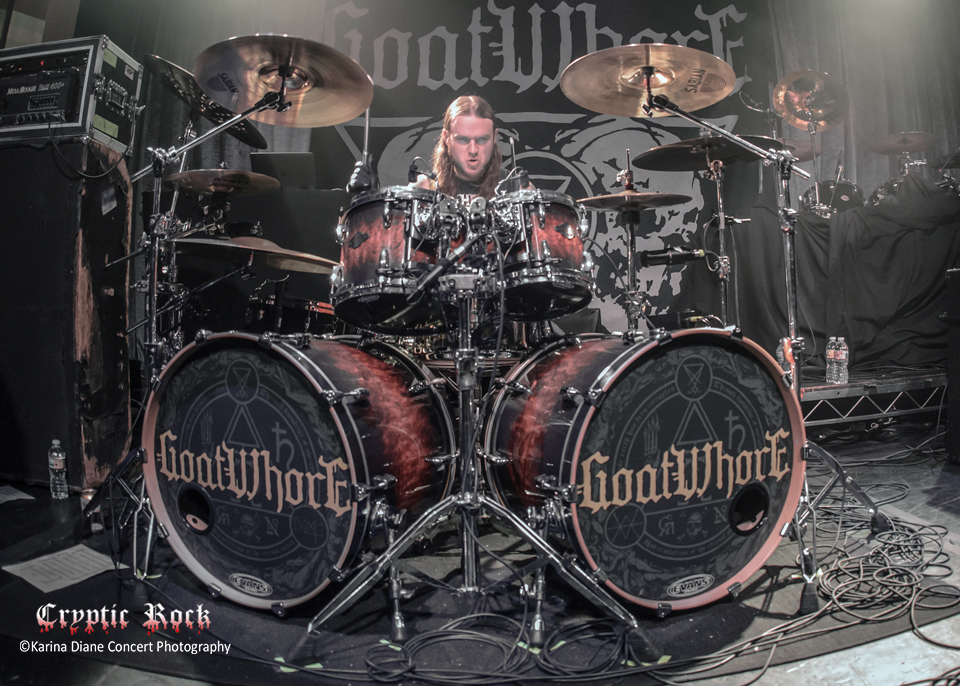 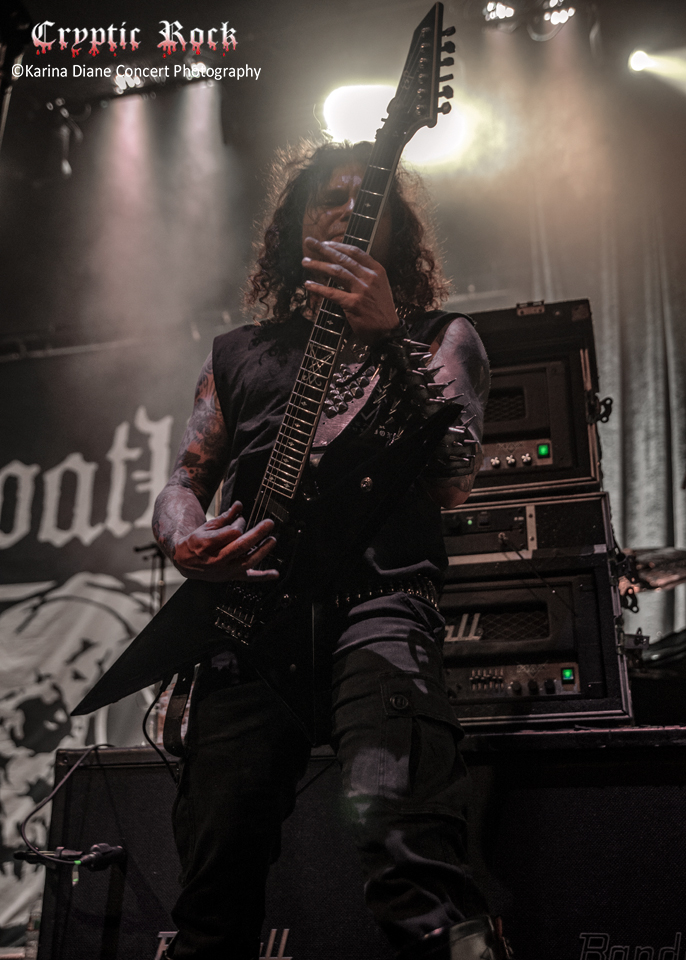 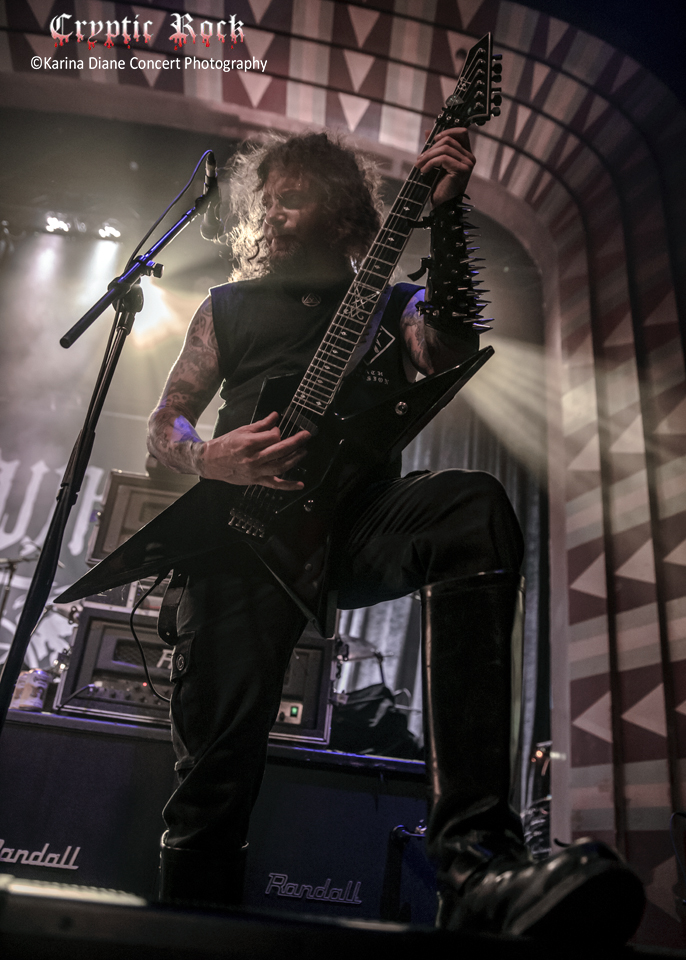 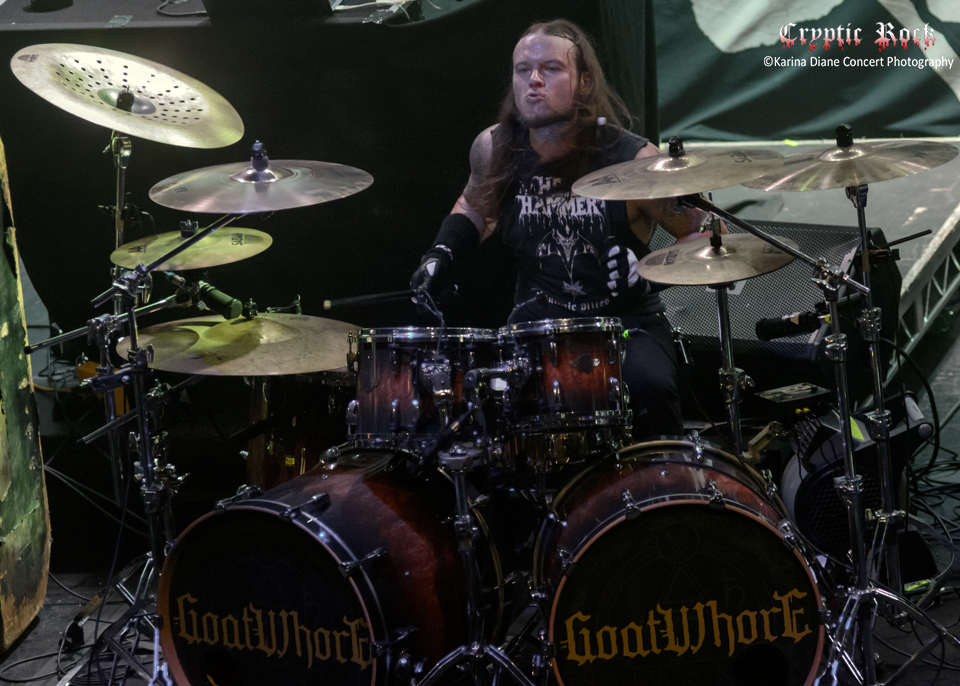 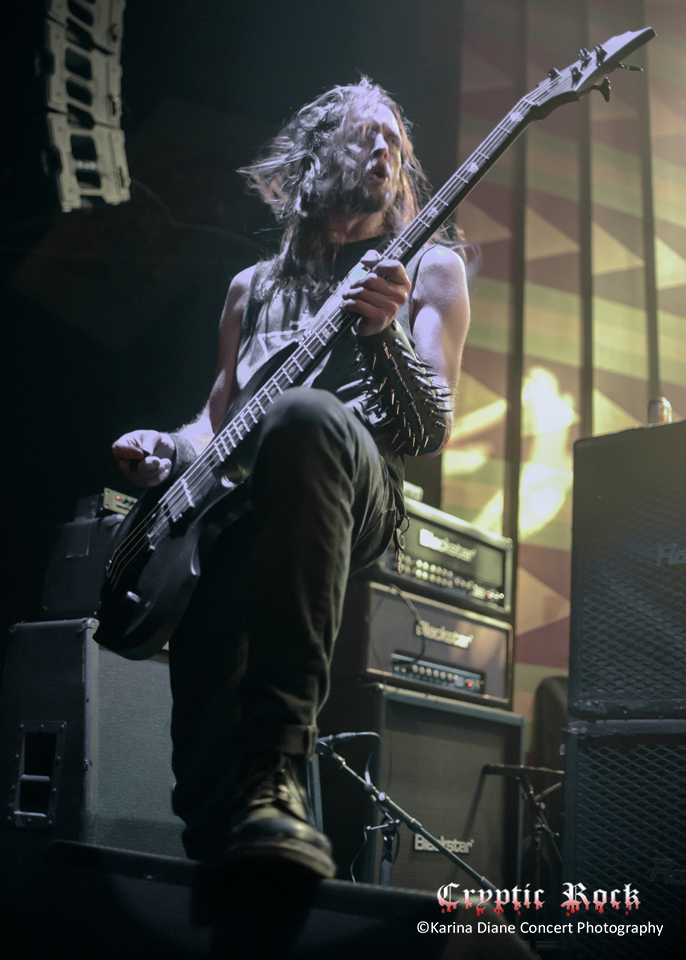 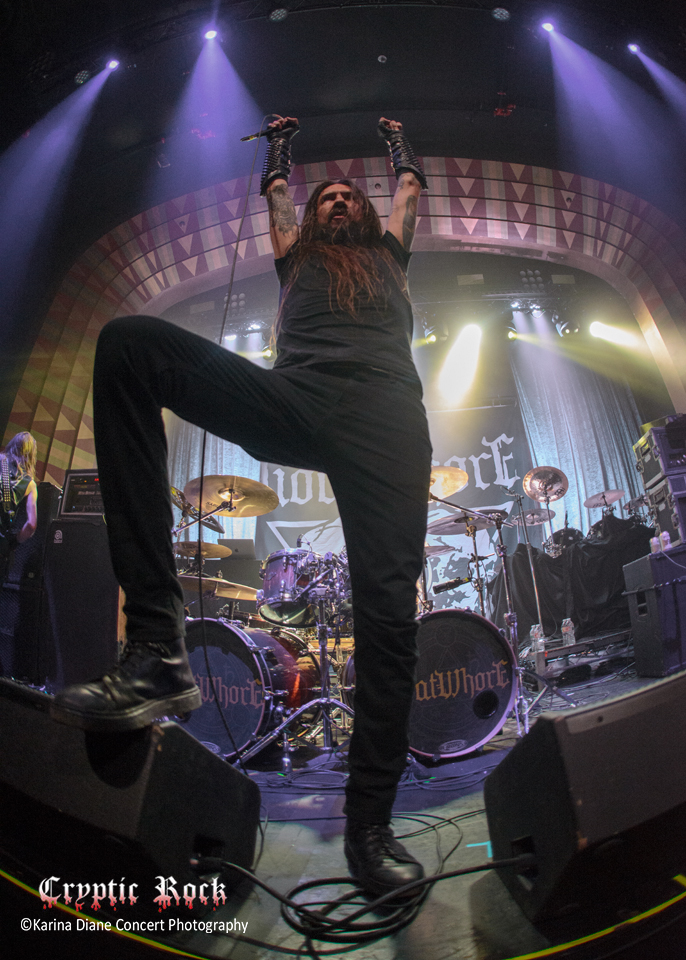 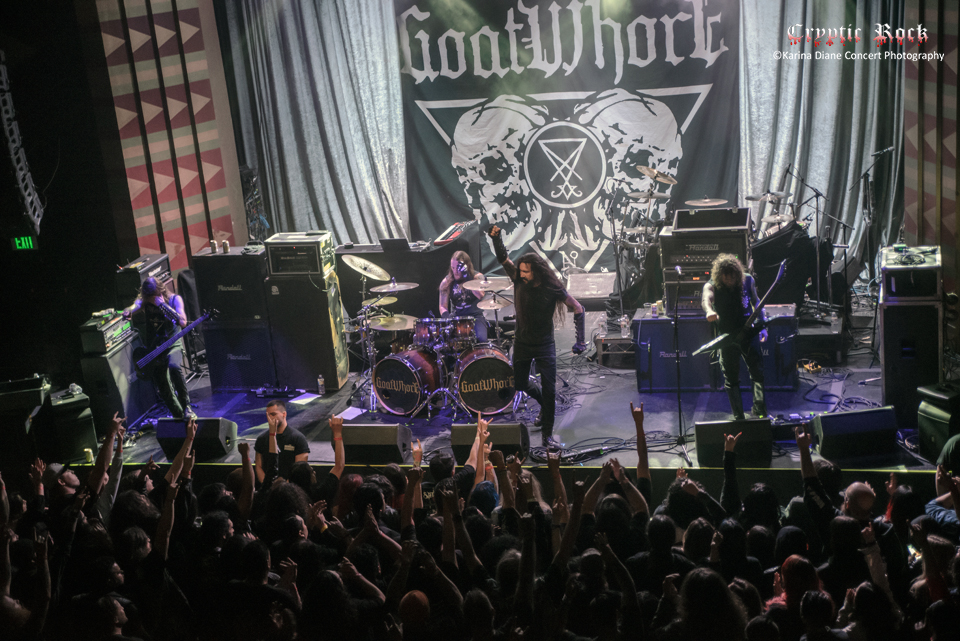 For some dedicated fans, they arrived almost too early to reserve a spot, and some ended up taking an intoxicated nap prior to Satyricon’s mind-blowing two-hour set. Miraculously. it seemed these tired fans woke in time to catch what probably was the best night of Black Metal that they will witness all year. As this tour was in support of their latest album, 2017’s Deep Calleth Upon Deep, they used the album cover backdrop on-stage with the iron-spiked symbol from their logo as the microphone stand. The black-and-white, simplistically-drawn skull and face may not appeal to everyone, but it further created the vibe of one of the most clean-sounding Black Metal bands out there.

Although Satyricon have adapted over the years from old-school ‘90s clean Black Metal to a more Black-n-Roll sound, their entire catalog of works is astounding and inspiring to witness in a live setting. The not so typical pace of the drums and subtle yet prominent keyboards really push boundaries into an unbound realm, thus the legend of Frost was born. They are one of the few Norwegian Black Metal bands to play with little to no face-paint, or crazy leather or spike-enhanced attire; they need no gimmick as the purity of the structure sells itself, and the subtleties of the keyboard melodies throughout really make the songs whole.

Of course, since 1993, Lead Vocalist Satyr and Drummer Frost have carried the main writers’ burden of Satyricon. However, in a live setting, they bring in some valuable players including Job Phenex Bos from the Netherlands on Keyboards, Azarak and Attila Vörös on Guitars, and Neddo on Bass. Additionally, bandleader, Satyr also offered beautiful moments on guitar, and being the only short-haired member of the long hair club, he held his own with his commanding stage presence and microphone stand weapon tricks. Now, before going any further, it must be addressed that this is reportedly going to be Satyricon’s final US tour ever. Wow, say it isn’t so? Well, it most likely is, afterall, it has been nearly a decade since they visited. So, with that in the back of mostly everyone’s mind, each and every soul in The Regent Theater was going to make the most of the moment, including the band themselves.

Firing on all cylinders, starting off the evening, they slithered into new tune “Midnight Serpent” and shortly after dove into the title-track of Deep Calleth Upon Deep. An album the band is quite proud of, it sees them explore new territory, and like an great piece of art, has subtle textures that only become more vivid with each passing listen. Bringing the songs to a live setting, others off the album including “Blood Cracks Open,” “To Your Brethren in the Dark,” and “Black Wings and Withering Gloom” made their presence known.

Moving forward, throughout their epic set, Satyricon also touched on such favorites as “Black Crow On A Tombstone,” “Now, Diabolical,” “Repined Bastard Nation,” “Repined Bastard Nation,” and more. Difficult to pinpoint the exact highlights of the amazing two-hour setlist, being it all held a high intensity, for argument’s sake, “Transcendental Requiem of Slaves” and main set closer “Mother North” certainly raised the pulse rate even higher. Yet there was still more and the encore featuring “The Pentagram Burns,” “Fuel For Hatred,” and “K.I.N.G.” satisfied the most ravenous of spectators present.

Satyricon, as do all Black Metal bands from Norway, carry a largely powerful presence with them that is not only comforting but mesmerizing. For a band of this nature and stature, 9 years was worth the wait to experience the band in a sold out venue such as The Regent Theater – the place to be with its raked floor and upstairs, leisurely balcony to escape to when the crowd gets rough. The vast majority of the audience left the venue after the very last song without a care in the world, for if they perished, all their needs would have still been met by Satyricon penetrating their ears for 2 solid hours with the mysterious, dark magic that is Black Metal. So, is this the last we will really see Satyricon tour the USA? No one can guarantee what the future holds, but anyone going out to one of the shows, here is some advance, take it all in as if there is no tomorrow!