Say Anything – I Don’t Think It Is (Album Review) 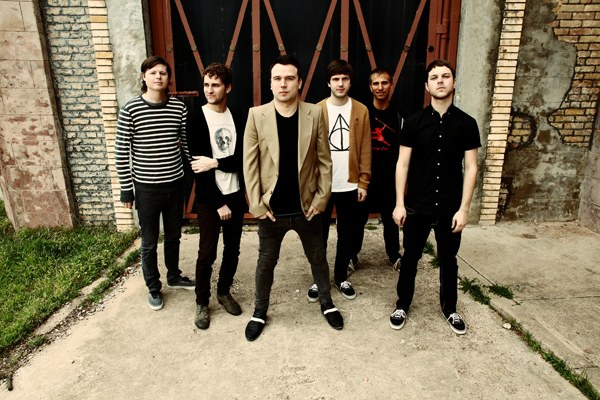 Back in early 2000, Singer/Songwriter Max Bemis and four friends decided they wanted to form a band. That band became famously known as Say Anything. Self-releasing two EPs as well as a full-length album, Baseball: An Album By Say Anything, within their first two years, the band was off to a rather quick start in getting their name out there among their local Southern California scene and beyond. Flash forward to 2003 and they are signed on with Doghouse Records, and in 2004 made a big impact with …Is A Real Boy. As the band gained support from both fans and critics, internally the success was overshadows sadly by Bemis’ bipolar disorder and substance abuse. Thankfully, in 2005 Bermis seeked help and put Say Anything back on track as they signed on with a new label and released In Defense of the Genre in 2007 to an extremely positive response.

Following with a headlining tour, and then pumping their self-titled album in 2009, Say Anything has been an unstoppable force since. While the lineup has altered through the years, Bemis has kept the dream alive, and now, in 2016, the cast of himself, Parker Case (Keyboard, Guitar, Backing Vocals), Reed Murray (Drums), and Garron DuPree (Bass) return with the new album I Don’t Think It Is. Their seventh overall studio record, and first since 2014’s Hebrews, I Don’t Think It Is hit shelves on Friday, February 5th, to an elated fanbase.

Kicking off the album is a song titled “Give a Damn,” which starts off with a distorted guitar riff and continues sounding a bit distorted through the whole song, but it reminds one of an old Sex Pistols kind of sound mixed with the unique vocals of Bemis. “17 Coked Up Speeding” brings up the dark days of Bemis’ past, with the drug use and abuse. Most of the songs on this album have a quick-paced beat and the vocals somehow slow down the tempo and bring the songs together. “Rum” does slow down the pace, and sounds a bit off beat in the beginning, which is for sure intended, and adds to the songs deep darkness. It is a much simpler song with background music bringing the lyrics to the forefront.

The shortest song on the album follows, called “So Numb.” It again brings back the fast-paced, anger-infused beat. “Goshua” adds an interesting R&B kind of beat, reminding one of Jonny Craig’s music styling, but keeping it Say Anything-esque with the vocals and bits of screaming. When one moves on to the next song, “Jiminy,” they hear it has the sound of old Say Anything. Bemis sings more than in previous songs, and the music reminds one of their old song “Alive with the Glory of Love.” “Princess” starts the next half of the album and continues the retro Say Anything slower chords with Bemis’ stronger vocals and lyricism.

“The Bret Easton Ellis School Of Witchcraft and Wizardry” is the slowest song on the album and probably has the best Bemis singing vocals throughout the album. The title is funny, but the song is anything but. It has a very serious tone and the darkness sucks one in and can bring out deep emotions in a listener. “#Blessed” has very different vocals than most of the album, which makes the song more Pop-like, but has cool alternating tempos, from fast-paced, to a simple, only drum beat, back to the quick speed. “Wire Mom” follows suit to the rest of the album, but then comes the song that seemed to surprise this listener. The seven minute long “Attaboy” is literally a mix of everything heard throughout the album. It has the fast pace in the beginning, Bemis’ vocals, then the pace slows and the female vocals come back, and then it becomes a sort of Spoken Word, filled mostly with profanities but also a deep sadness. The album ends with “Varicose Visage,” really sticking with the Spoken Word kind of sound, not really having much musically happening until the last minute, while through most of the song is just the banging of the drum to help Bemis keep his pace in his speech.

I Don’t Think It Is, is an interesting album that listeners may not be able to pin-point a specific sound to correlate to a certain genre. With that in mind, Say Anything has always had their own edge and style, thus they continue doing so even through this album. The infusion of different kinds of music, like the hints of R&B and even a bit of Techno, seems new, but it works. At just over forty minutes, the twelve songs are individually compelling as they are a cohesive piece, making I Don’t Think It Is a wonderful edition to the Say Anything catalogue. CrypticRock gives I Don’t This It Is 4 out of 5 stars.