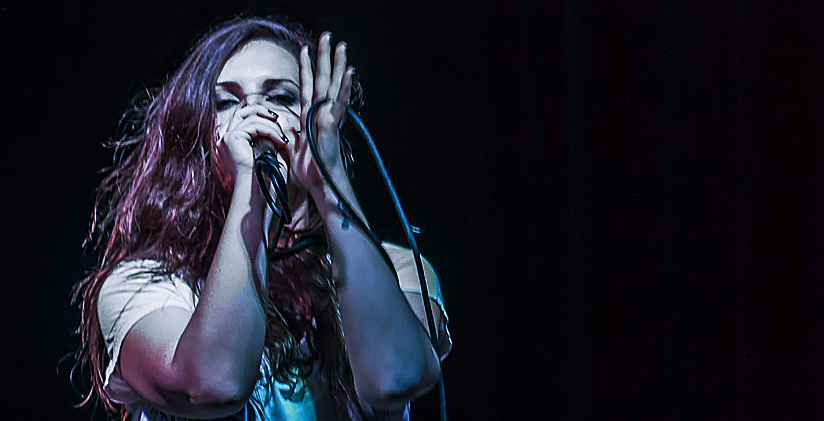 There is a certain subset of New York City dwellers who complain about the “bridge and tunnel crowd” living outside the Five Boroughs. These well-heeled, cosmopolitan individuals consider anything located east of Queens hopelessly boring and provincial. Clearly, such snobbish elitists are unaware of the wealth of talent and culture that Long Island has to offer. Fortunately for those who do value the many brilliant creators living in the land of malls and beaches, Planet of Sound Promotions, a Long Island based record label/artists’ collective, has tapped into the vein of creativity that stretches across the Island, branching from the North Shore to the South Shore and into every community between. Formed in the summer of 2012, Planet of Sound routinely presents showcases of up-and-coming local artists. On Thursday December 4, 2014 Sceneless Scene #10 came to the village of Patchogue Long Island to shine bright at 89 North Music Venue. The event featured six Long Island based artists of various genres and Kiirstin Marilyn of New York City.

Indie-Alternative artist Chris P. Cauley opened the show playing to the early 7 PM crowd in support of recent release El Dorado, which local critics have praised highly. The music of the Chris P. Cauley Collective falls solidly into the genre of Rock, but with a hint of Rockabilly and a variety of stylings to keep things interesting. One critic describes Cauley’s music as a combination of Pearl Jam, Husker Du, and Sonic Youth. Cauley and his band, who play 89 North frequently, put on a tight set which effectively primed the audience for the variety of acts still to come. El Dorado is currently available on vinyl, and Cauley plans to release a new single on the first day of each month this year. The first, “Don’t Forget to Bother,” can be found on his website.

Solo acoustic artist Jacob Restituto took the stage next, bringing the energy down a notch with his mellow songs. A novice on the music scene, Restituto had a strong stage presence, without the swagger of more seasoned performers. Building confidence, his earnestness and humility just served to endear him to the audience who wholly supported him throughout his set. Restituto is a skilled musician with hints of John Mayer in his vocals. His debut album, Once, is available on iTunes and on his website.

Offering up a complete change in tone, Krautrock trio Ruckzuck played next. Having released their first album (self-titled) in November, the band has been playing frequent gigs and are currently at work recording new songs set for release this spring. This whimsical group is made up of brothers Nick and Matt Bedo on guitars and drums respectively, and Faith Kelly on vocals, keys, and ukulele. By the time Ruckzuck played, the crowd had grown substantially, and their upbeat music and energetic stage presence soon had everyone moving. While the Bedo brothers laid down the beats and groove, Kelly shined on vocals, her cadence and style somewhat reminiscent of Lorde. All three band members were clearly having a blast as they played their way through a fun, psychedelic set that the audience loved.

Alternative-Progressive Rock group A Band in Ship played next. The group has released a few original tunes, which can be found on their EP The Storm, but at this show their focus was on cover songs. Made up of former members of Still Current, A Band in Ship is Nick Balzano on vocals and rhythm guitar, Sean Cashman on bass and backup vocals, Ryan McCloskey on drums, and Mike Plume on lead guitar. The band plays regularly at local music venues, and they are worth checking out.

Genre-bending powerhouse Kiirstin Marilyn closed out the night with a passionate and energetic performance. The accomplished artist blends elements of Hip-Hop, Pop, R&B, and Rock to create a sound that is entirely original in a scene where originality is sometimes hard to come by. Kiirstin Marilyn put on a uniquely powerful show that had the audience enthralled. With powerful vocals and the charisma of someone who was born to be on stage, her performance made it clear that her many awards and accolades have been well-deserved. A two-time winner of the RAW Musician of the Year award, Marilyn has been hard at work touring and recording, and it looks like the audience at 89 North had the chance to catch the singer just as she’s on the verge of mega-stardom. Kiirstin Marilyn has a few more NY appearances coming up along with a show in Baltimore in March, and she is planning on hitting the West Coast this Spring. Catch her before she is out of reach. Meanwhile, check out her EP The Struggle, which can be found on her website along with her horror-inspired music video, “Ghosts.”

89 North will host two more Sceneless Scene Showcases in March and April. If the December 4th show is any indication of what these will be like, Planet of Sound will procure a strong line-up of up-and-coming talent. Perhaps it is that its flanked by both the ocean and the greatest city on earth that makes Long Island a breeding ground for creatives, but whatever the cause for the proliferation of talent, music fans should take note and check out the Long Island scene– even those who have to travel by bridge or tunnel to get to the show.

Fist of the North Star – 35 Years of Fisticuffs Einherjer – North Star (Album Review)
Like the in-depth, diverse coverage of Cryptic Rock? Help us in support to keep the magazine going strong for years to come with a small donation.