Few cartoon characters have had the enduring legacy of a lovable pup named Scooby-Doo. And if you’re wondering where that snack-loving canine is, well, he’s proving that he is not the weakest link in the animated Family Comedy Scoob!, which arrived on DVD and Digital on Friday, May 15, 2020 thanks to Warner Bros. Pictures. 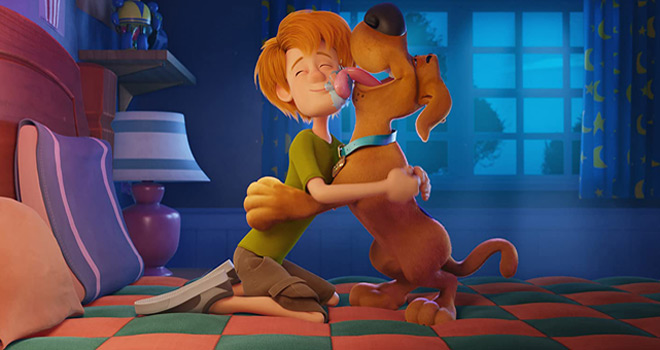 In Scoob!, we open onto Venice Beach, California, and the origin story of the greatest crime-fighting duo in history. No, not Holmes and Watson—Shaggy (Forte) and Scooby (Welker). After our furry superstar commits grand theft gyro and the best of friendships is forged, the story moves into the present, with Raggy and Rooby being joined by their pals Fred (Efron), Velma (Rodriguez), and Daphne (Seyfried). Lamenting their finances over a meal, and ruing the fact that the Mystery Machine is in dire need of a rehaul, the team entertains the idea of an investor. Enter Mr. Simon Cowell.

After a vocal duet from our favorite goofballs that fails to make them the next American Idols, the saddened pair head next door to the bowling alley, where they manage to encounter trouble in the form of a horde of tiny, violent robot creatures—and then it gets worse. With the fate of one of their own hanging in the balance, can the remaining members of Mystery Inc.—along with the help of the Blue Falcon (Mark Wahlberg: Boogie Nights 1997, Ted 2012), Dee Dee Skyes (Kiersey Clemons: Dope 2015, Sweetheart 2019), and wonder-dog sidekick Dynomutt (Ken Jeong: The Hangover 2009, Crazy Rich Asians 2018)—save their friend from the vile clutches of Dick Dastardly (Jason Isaacs: The Patriot 2000, Harry Potter and the Chamber of Secrets 2000)?

Clocking in at 94 minutes, Scoob! was directed by Tony Cervone (Duck Dodgers series, The Looney Tunes Show series) from a screenplay written by Matt Lieberman (The Christmas Chronicles 2018, The Addams Family 2019), Adam Sztykiel (Made of Honor 2008, Rampage 2018), Jack Donaldson, and Derek Elliott. The screenplay is based on a story written by Lieberman, Eyal Podell (Cars 3 2017, The Angry Birds Movie 2 2019), and Jonathan E. Stewart (Cars 3 2017, Smallfoot 2018), and utilizes the characters created by Hanna-Barbera Productions. 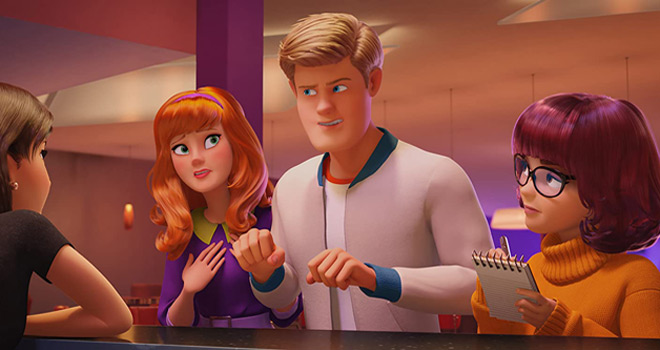 In a tale that spans from an abandoned amusement park in Romania to Athens, Greece, and back to California, Scoob! takes young adventurers and their families on a fun ride full of loyalty, friendship, and growth. It does this with a phenomenal screenplay full of excellent wit peppered in pop culture and cyber-life references (such as a superhero who loves selfies), bowling puns, and even some Harry Potter humor. Add to this pterodactyls, Scoob’s stellar bowling form, a new spin on Whack-A-Mole and a not-quite-super hero named Brian, and you have a fabulous new entry into this beloved franchise,

A key part of the brilliance of Scoob!’s script is in its creative use of old Hanna-Barbera characters who have been unearthed from the vault: Captain Caveman (Tracy Morgan: 30 Rock series, The Last O.G. series), Dick Dastardly and Muttley (Billy West: The Ren & Stimpy Show series, Futurama series), Blue Falcon and Dynomutt, as well as Dee Dee Skyes. While many of us don’t necessarily remember these classic cartoons, they still exist in the Hanna-Barbera catalogue and their inclusion here provides a thoughtful twist to this fresh story.

Of course, for those who remember the original Scooby-Doo cartoons, Scoob! is a dramatic evolution. The only original voice actor who remains is Welker (who originally voiced Fred, but now tackles Scoobert), bringing a sense of familiarity with his magical performance. And though his castmates have changed, so have the characters’ visual presentations: Fred is a little more ‘average American male,’ Velma a little less mousey, and Daphne a bit less of the dippy bombshell. For those that refuse to adapt, the changes might be too much to fully enjoy the experience; however, those with an open mind will find that Scoob! maintains the heart-warming spirit and silliness of the original series and takes it to a new level. References to toxic masculinity and the fierce Dee Dee Skyes, along with an emphasis on the problem-solving skills of both Velma and Daphne, injects a dose of girl power into Mystery Inc. that is joyfully welcome. 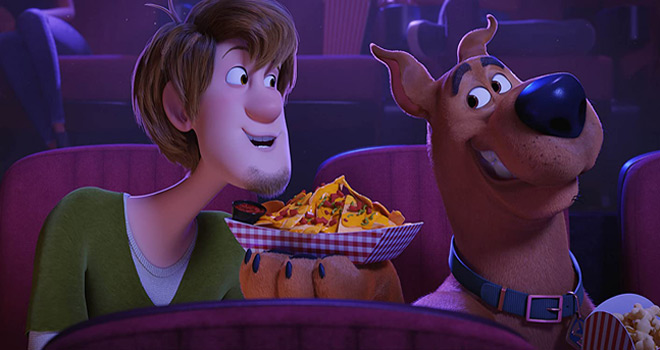 Packaged with exceptionally crisp and vivid HD visuals thanks to the film’s magnificent animation team, the only downside to Scoob!, if there is one, is that very young viewers are apt to lose interest in the film’s second act, as the pieces of the mystery begin to unfold and the action slows for a bit. Unable to understand the witticisms, youngsters might tap out for a while. (Oh, and there’s no g-g-g-g-ghosts! Zoinks!)

To fashion a nice dork analogy: consider Scoob! to be the Star Wars: Episode VII – The Force Awakens of the Scooby-Doo chronicle; capturing the original magic but crafting it for today’s audience. With an amusing screenplay and stellar visuals, as well as a danceable soundtrack, this Family Comedy is an enjoyable snack for the entire family, one that will make mom and dad snicker as the kids giggle themselves silly.

So, climb on into the Mystery Machine with the gang as they learn that there’s little in life more valuable than friendship. Oh, and don’t forget to bring extra Scooby Snacks! Jinkies, Cryptic Rock gives Scoob! 4.5 of 5 stars. 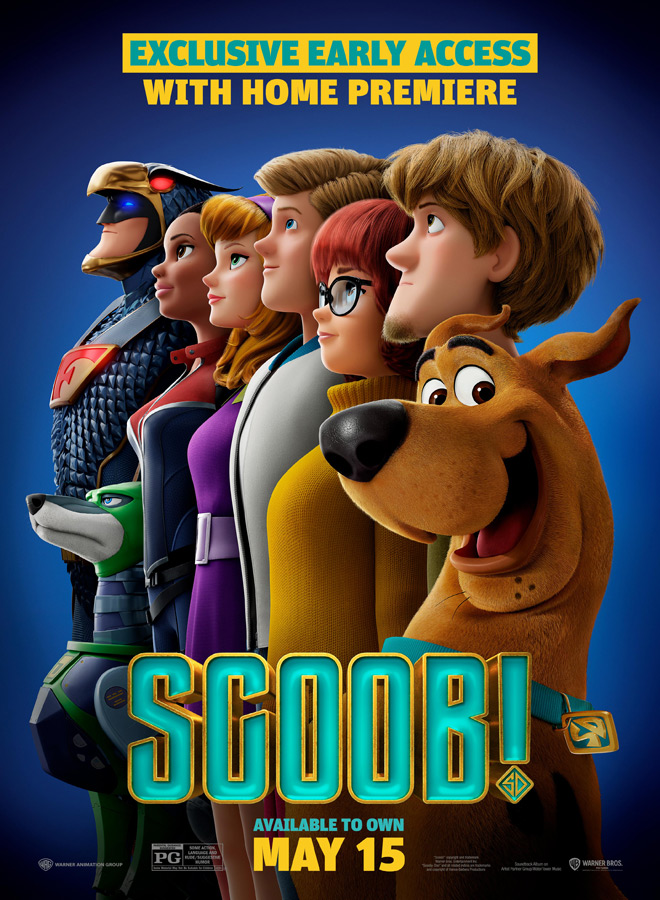