Considered by many one of the most important bands in Rock history, Scorpions have quite a tale to tell. Undergoing lineup changes, stylistic shifts, among other setbacks, Scorpions have certainly lived up to the name of their 2004 album, Unbreakable.

With so much to talk about, it would take a novel to outline the path of a band destined for success. Having a story that dates all the way back to 1965, it would not be until 1972 when one of the early lineups of Scorpions would release their debut album, Lonesome Crow. A promising start for a young band, over the course of a decade, they attained moderate success, primarily in their homebase of Deutschland.

Ready to take the next step, their seventh studio album, 1980’s Animal Magnetism, would finally see the band pick up traction internationally. Prime to take on the world, a year later, they went into the studio to record a new album with hopes of building off recent commercial success. Unfortunately, they were faced with the reality that their unique lead vocalist, Klaus Meine, was experiencing throat problems. Having to undergo surgery, the future of Scorpions suddenly became uncertain.

Thankfully, the tenacious Meine recovered rapidly and joined his brothers in the Scorpions to finish off their eighth studio album, Blackout. Released on March 29th of 1982 via Harvest/EMI in Europe and Mercury in the USA, by June of that year, Blackout would be certified gold and, within two years, attain platinum status. Now 35 years later, Blackout is undeniably a focal point in the history of the band’s will to triumph.

Recorded over the course of a year, the band split time between Villa San Pecaire, Saint Jacques in Grasse, France and Dierks Studios in Cologne, West Germany to work on the album. Interestingly enough, while Meine was healing his voice, the band called on Don Dokken to record the demos, but none of which ever made the final cut of Blackout. An collection of nine songs, the music was composed by Schenker while Meine and Rarebell shared the task of penning the lyrics. Teaming up with Dieter Dierks for their six consecutive album, the production of Blackout would become as distinct as the songs themselves.

Placing the vinyl record on the turntable, as soon as the needle drops on Side One, listeners are hit with the whaling Heavy Metal guitar of the title track, “Blackout.” Unifying the rapid-pace guitar work of Schenker and Jabs, it would be the signature of the entire album. This energy poured out on the next track, “Can’t Live Without You,” a very catchy tune featuring a repetitive groove and powerful vocals.

One of three hit singles released off Blackout, “Can’t Live Without You” did exceptionally well on charts, but not nearly as good as the following track, the legendary “No One Like You.” A single which hit #1 position on the US Billboard Rock Tracks, it was a cut heard blaring from car stereos all throughout the summer of 1982 and beyond. A lustful love song with an epic chorus, coupled with a music video that saw Schenker portraying the character on the album’s cover, Gottfried Helnwein, it is without question one the band’s best songs ever.

Taking the groove down a bit to that of a Classic Rock ballad, “You Give Me All I Need” is a signature of Rarebell’s lyrical style. In a 2015 interview with Cryptic Rock magazine, Rarebell reflected on Blackout and lyrics he wrote stating, “My lyrics were mostly very sexual and Rock-n-Roll, because I lived that life at the time.” Keeping the album even-balanced, Side One concludes with the heart-pumping and fast-paced single “Now!” The shortest song on the album, at just about two and a half minutes, it is packed with killer guitars and soaring unique tenor of Meine.

Time to turn the record over, Side Two is launched with blistering “Dynamite,” a powerful song which begs the listener to carelessly headbang along. This is before “Arizona” comes in with a nice flow, strong backbeat, and has a feel-good vibe. One of the single outtakes off Blackout, a interesting promo clip was released in association with the track with scenes from Arizona State University’s campus.

Then comes the album’s longest track, at just under seven minutes, “China White.” With strong lyrics and a heavy groove, the song stands strong all on its own. While the general lyrical theme on Blackout revolved around love, “China White” really sums it up nicely, especially with the words, “The more love you give, the more love you’ll find.” In addition, Schenker was torn on which of his guitar solos to use on the track, so there are actually slight differences in the solos on US and European releases.

Showing how intricately laid out Blackout was, the final track, “When the Smoke Is Going Down,” leaves the listener with a serene Rock ballad. Full of emotion and beautiful guitar melodies, it caps off a complete Scorpions masterpiece.

In the thirty-five years since Blackout’s release, the Scorpions are still going as strong as ever. Arguably their best album ever, it paved the way for their launch into superstardom in 1984 with the release of Love at First Sting. Putting out a total of eighteen studio albums, their latest being 2015’s Return To Forever, while retirement was discussed, it appears Scorpions simply cannot stop rocking, and why should they.

One of the best live bands in the world, they are set to return to North America this coming fall on their Crazy World Tour with special guests Megadeth. Rich in history over fifty years long, Scorpions are a Rock-n-Roll treasure, and Blackout remains a vital part of their story 35 years later. 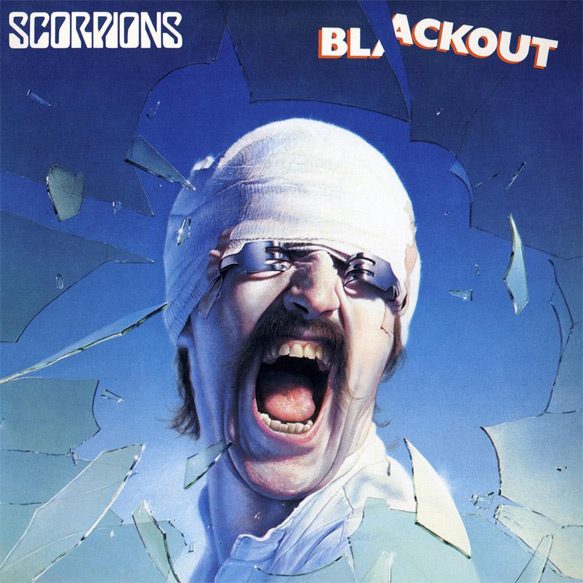