The teenage years can be the most difficult, high school can be ruthless, and being a Scout is probably one of the last things someone would want to admit to. Coming of age and being interested in more than badges and camp-outs, a group three young men learn that being a Scout may have more advantages than they know as they head into a Zombie infested world in the Horror Comedy Scouts Guide to the Zombie Apocalypse. Written by the creative team of Carrie Lee Wilson, Emi Mochizuki, Christopher Landon, as well as Lona Williams, the film is directed by Landon and began to spread internationally in October 2015 before infecting the USA just in time for Halloween on October 30th via Paramount Pictures. Now available on Blu-ray/DVD as of January 5, 2016, Scouts Guide to the Zombie Apocalypse is delivering treats and tricks for more potential fans. 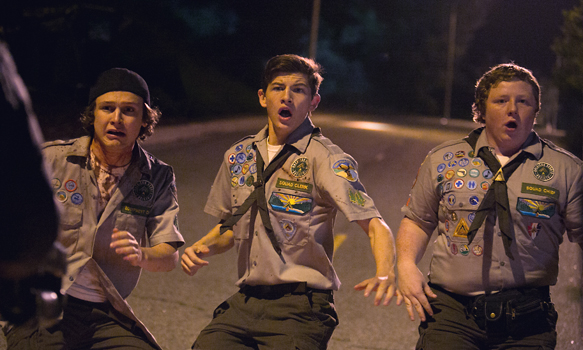 A dynamic mix of talents, the main cast stars David Koechner (Wag the Dog 1997, The Goldbergs TV series) as Scout Leader Rogers, Tye Sheridan (The Tree of Life 2011, X-Men: Apocalypse 2016) as Ben, Logan Miller (Ghosts of Girlfriends Past 2009, Ultimate Spider-Man TV series) as Carter, Joey Morgan (in his debut film) as Augie, and Sarah Dumont (Oh, You Pretty Things! TV series, Playing It Cool 2014) as Denise. It all starts with Scout Leader Rogers, Ben, Carter, and Augie trying to recruit some new Scouts, which, in high school, is not an easy task. After a failed attempt, Ben and Carter make their way home as they discuss quitting Scouts. Augie clings to Scouts as a way of dealing with the loss of his father, therefore taking it very seriously. Ben, a innocent and sweet guy, has a crush on Carter’s sister, Kendall (Halston Sage: How to Rock TV series, Goosebumps 2015), while Carter yearns for wild and crazy partying.

While going back and forth about leaving Scouts, they hit a deer, get a flat, but Ben is delighted to see Kendall and friends come to assist. Carter, excited to experience girls, finds a way to be invited to a secret senior party. Pumped up, after fixing a tire, they discussing the night’s plan, but Ben discovers the dead deer is gone. But where did it go? 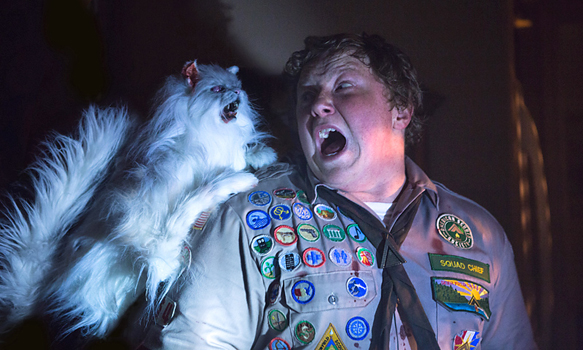 On the same night of the secret party, Augie is scheduled to receive a badge he has been working on attaining, and a camp-out is arranged in celebration.  Unfortunately, this puts a damper on the party plan. Ben and Carter devise a plan to sneak out after Augie falls asleep. With plenty of hijinks ahead, they meet Denise, a cocktail waitress at a strip-club, who helps them purchase beer after Ben uses Scout talents to fix her pocketbook. From here, the laughs and jumps begin as the once thought dead deer returns as a Zombie, Scout Leader Rodgers becomes a Zombie that just will not die, and Ben, Carter, Augie, and Denise band together to save people from the Zombies attacking the secret senior party and killing Ben’s interest, Kendall. The group also learns that the military has plans to bomb the town to rid the infected. Unlikely heroes, it is up to the Scouts to save the day.

A new twist on Zombies, these undead ghouls still retain memory of who and what they were; a Britney Spears loving bum is still a bum that begins to sing along, Scout Leader Rogers survival skills are still in tact, a stripper continues to perform, etc. Introduced to various town-folk throughout the movie, a nasty, elderly cat lady (Cloris Leachman as Miss Fielder: Lassie TV series, Scary Movie 4 2006) still has a thing against Carter after death, and so do her zombified cats. In addition, an old man in a robe still does not know to cover up, but comes in handy (pun intended). During all this craziness, a trip to the town hardware store results in some serious Zombie fighting weapons for the group to kick some ass. 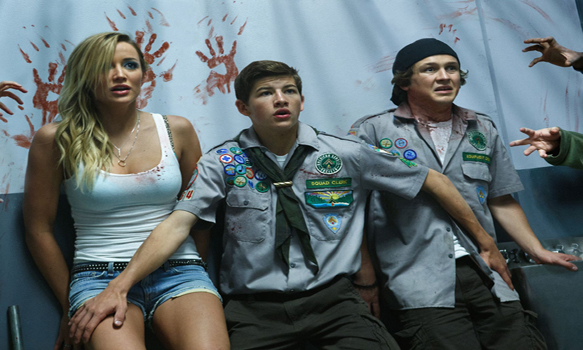 Led by a cast of not so known names, speckled with a few, more popular actors, Scouts Guide to the Zombie Apocalypse  is greatly written and acted. For those looking for jumps with lots of laughs, Scouts Guide to the Zombie Apocalypse is worth watching with enough romance, gore, and a few flashes of sexual nature, the film covers it all. That said, the young Joey Morgan shines in his debut, and more shall be seen of the others as this young cast performed with the experience of seasoned actors. Anyone who enjoyed films such as 1986’s Return of the Living Dead, 1992’s Dead Alive, 2004’s Shaun of the Dead, and 2009’s Zombieland, Scouts Guide to the Zombie Apocalypse is right up there as one of the best in the Horror Comedy’s genre made over the past decade. Watch it with a few friends and be reminded that friendship is more important than popularity, parties, and perhaps The Scouts are not as uncool as one may have thought. CrypticRock gives this film a 4.5 out of 5 stars. 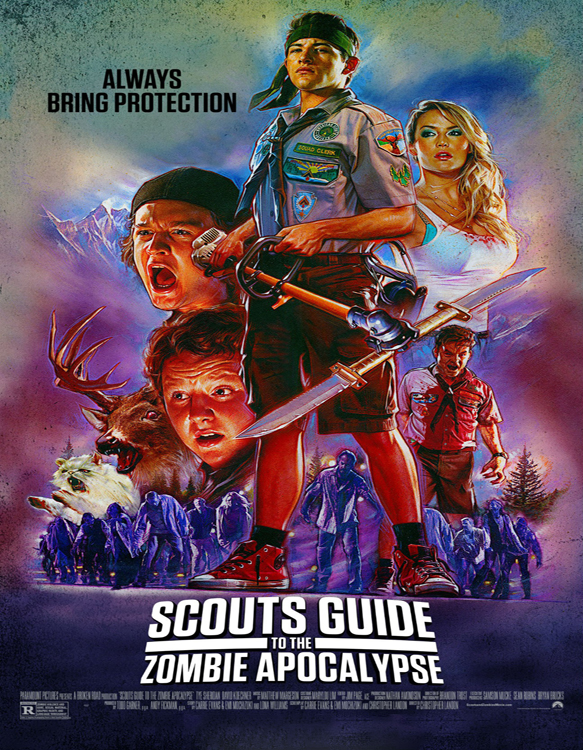