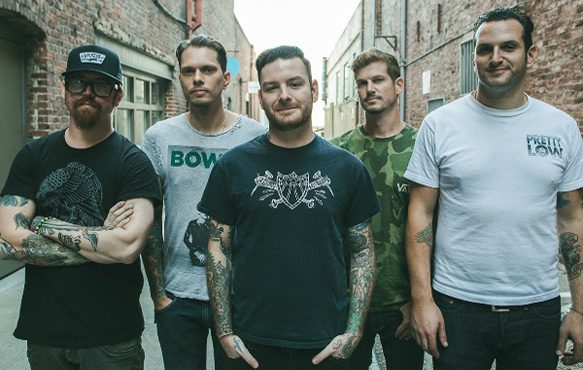 Calling all fans, we have got another victim: she is a lady in a blue dress who believes that life is not a waiting room. She cannot be saved from the family tradition, mi amor, so let us just discuss the importance of the moment of death, shall we? Nonsense, you say? Okay then, let us discuss this instead, Senses Fail’s newest musical offering, the In Your Absence EP, arrives on Friday, March 3, 2017 via Pure Noise Records.

Hailing from the Garden State of New Jersey, where they formed back in 2002, the rest has been fabulous Post-Hardcore history from 2004’s Let It Enfold You through 2015’s Pull the Thorns from Your Heart. Sustaining many line-up changes over the past fifteen years, through it all, Vocalist, Songwriter, and Founding Member James “Buddy” Nielsen remains as anchor.

At the time of the band’s inception, the idea behind Senses Fail was unique, a sonic blend of Punk Rock and Hardcore with lyrical influences taken from poetry, literature, religion, Eastern philosophy and spirituality. Let us call it Enlightened Core. In fact, the superbly well-read Nielsen has reportedly stated that the band’s name, Senses Fail, comes from the Hindu belief that in order to attain total Nirvana, one must let go all attachments, meditate, and allow their senses to fail.

Over the past fifteen some years, Senses Fail have shared stages with everyone from Finch, The Used, Millencolin, The Starting Line, My Chemical Romance, Killswitch Engage, Less Than Jake, The Early November, Emanuel, From Autumn to Ashes, Saosin, Bleeding Through, New Found Glory, Set Your Goals, Stick to Your Guns, The Bled, The Academy Is, Funeral For A Friend, Silverstein, The Story So Far, and an inflatable sheep named Helga. They have played the Vans Warped Tour a zillion times over, as well as Taste of Chaos in 2005 and 2007. Additionally, they toured with Taste of Chaos International in 2006.

Surviving time, Senses Fail’s current line-up is a cast of merry musicians that includes Nielsen, Lead Guitarist Zack Roach (Spirit of the Stairs), Rhythm Guitarist Matt Smith (Strike Anywhere), Bassist Gavin Caswell (The Black Pacific), and Drummer Chris Hornbrook (Big Black Delta and Poison the Well). Ready to gift their fans more excitement, they now present their newest extended-play, In Your Absence, via Pure Noise Records. In a recent discussion with Billboard.com, Nielsen explained the motivation behind the new acoustic EP: “Our last record was pretty heavy compared to what we have been [known] for as a band, and we thought it would be an interesting juxtaposition to do the exact opposite of heavy.”

In Your Absence is the absence of heavy, sonically speaking. Topically speaking, it is very heavy; frankly, open, emotionally mature. This is what it sounds like to grow-up! A collection of three new acoustic songs and two unplugged revampings, In Your Absence shows that Nielsen – who has previously tackled personal topics from depression and anxiety to panic attacks – is strong enough to wear his heart on his shirt-sleeves.

Not an ode to South America, “Jets To Perú” is a gorgeously simple love song. “The only thing I ever need is you smiling right back at me / The world could fall apart, you own my lonely heart,” Nielsen sings with sincerity in spades. He turns toward the more sensitive on title-track “In Your Absence,” a song about coming to grips with the traumatic fact that we will all leave this earth some day and leave a gaping hole in someone’s heart. “Death Bed” is a similar discussion of death: “Life’s not fair and we only get so much time / The loved ones we lose will stay with you in your heart and in your dreams . . .” Reportedly, Nielsen’s wife suffers from Multiple Sclerosis and it is her struggles with the illness that have inspired his latest set of sentimental lyrics.

Fans of Nielsen and Senses Fail are no strangers to the last two tracks: “Family Tradition” off Life Is Not A Waiting Room and “Lost and Found” from Still Searching. Both tracks receive a second life on the EP, with “Family Tradition” – a song about alcoholism inherited from an absentee father – turning somewhat more atmospheric, poignant, and tender. It is the only song on the album to contain electric guitar work, though subtly performed. Both revamps are a perfect fit for the collection; candid, genuine, and universally appealing.

Clearly, just when you think you know Senses Fail, Nielsen loves to toss out a crafty curve-ball: they have gone from their heaviest disc yet, 2015’s Pull the Thorns from Your Heart, to an all-acoustic EP, one extreme to the next. It is fitting, beautifully poignant, touching, and raw; there is no hiding behind the amps here. A perfect collection from an artist/band who are continually reinventing themselves. For the bravery to bleed right onto disc, CrypticRock gives Senses Fails’ In Your Absence EP a 4.5 out of 5 stars. 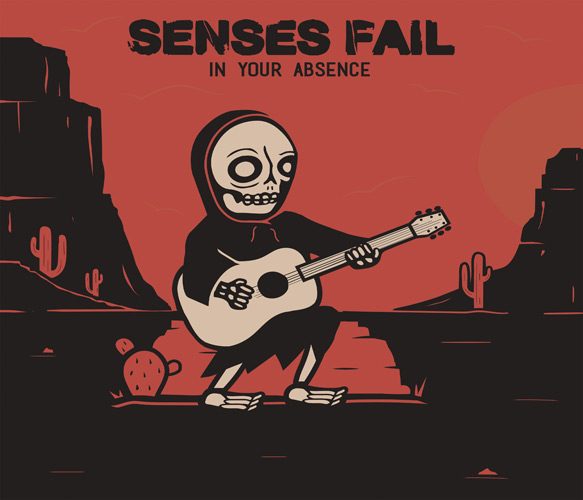 See Senses Fail on their North American headlining tour this spring, in celebration of their 15th anniversary. The band will be performing 2006’s Still Searching in its entirety, along with other fan-favorites. Tickets are on sale now at sensesfail15.com.