For a nation that has helped produce animated projects in both the East and West, Korean animated films, or ‘Aeni’, do not seem to get much attention. Studios like AKOM (The Simpsons series), Dongwoo Entertainment (Justice League series) and Saerom Animation (Regular Show), amongst others, have worked on a giant chunk of Western Saturday morning and weekday afternoon cartoons. While in the East, DR Movie has done clean-up duty on many well-known Japanese properties like 1995’s Ghost in the Shell and 2016’s Jojo’s Bizarre Adventure: Diamond is Unbreakable. Yet their own homegrown projects remain relatively obscure in comparison. 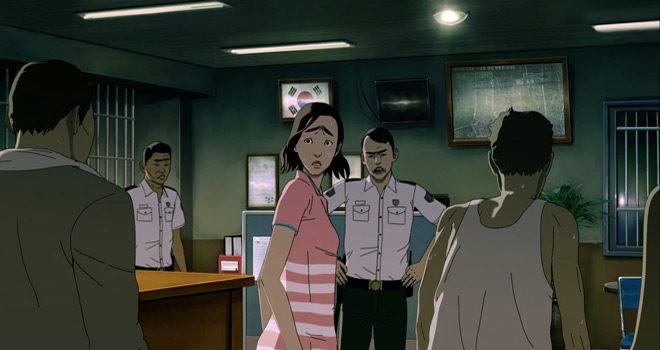 Even with the rise in popularity of Korean media, from films like 2005’s Lady Vengeance to the bonkers world of K-Pop, Aeni had not broken out in the same way. Yet, slowly but surely, this has begun to change. The year 2011 saw the family-friendly Leafie: A Hen in the Wild become the most successful homegrown Korean film for over 40 years, drawing 2.2 million viewers nationwide. In the same year, a less wholesome film called The King of Pigs, about two friends recalling bitter high school memories, won three awards at the Busan International Film Festival.

All this said, comes Seoul Station. Originally titled Seoulyeok, in 2016, it won the award for Best Animated Feature Film at Asia Pacific Screen Award. Directed by Sang-Ho Yeon, in 2013, he made The Fake – a film about a domestic abuser trying to expose the cult leader conning his village out of its funds. It ended up winning Best Animated Film at the Sitges Film Festival and Gijón Film Festival.

Then, in 2016, Yeon made his first live-action film with Train to Busan­, about a zombie outbreak on an express train, which managed to win the Best Foreign Film and Best Horror Film awards at Cannes. So, expectations were high when an animated prequel came out a month afterwards. Released in several countries over the past year, finally, Seoul Station popped up on VOD domestically back in June 2017, thanks to FilmRise. Though, how does it compare to its live-action counterpart?

Produced by Finecut and Studio Dadashow, Seoul Station is about a father, Suk-gyu (Ryu Seung-ryong: War of the Arrows 2011, The Admiral 2014) searching for his runaway daughter Hye-Sun (Eun-kyung Shim: Sunny 2011, Masquerade 2012) in the middle of Seoul. She had been working as a prostitute until she met her boyfriend, Ki-Woong (Joon Lee: Ninja Assassin 2009, Rough Play 2013). The problem is, due to money troubles, he is thinking of putting her back to work. 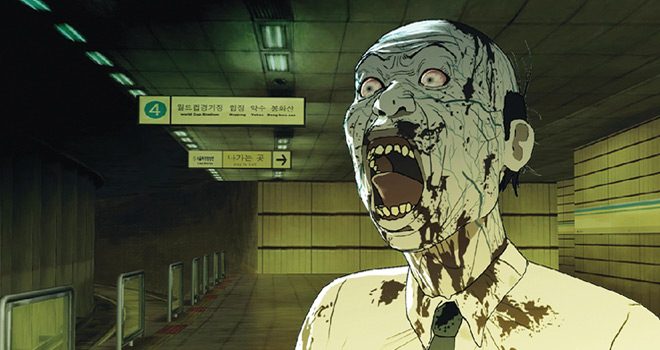 They go their separate ways after an argument, and things only get worse from there. The city’s homeless people fall victim to a zombie plague and start attacking the rest of the public. Suk-gyu finds Ki-Woong and demands to know where Hye-Sun is, but she is nowhere to be found. They have no choice but to search for her before either of them fall victim to the undead.

First off, Seoul Station is not a pretty film. That is not referring to the violence or gore, no, it is referring to the animation. Compared to other zombie films, it is actually pretty tame. A lot of the Korean studios earned Western jobs more due to their cost than their quality. It is nowhere near as bad as, say, the 1980s Transformers series, but it has cut corners. CG characters and objects stick out against the painted backdrops. Painted objects in one scene become CG in another so they can be interacted with. The animations are recognisably human, but the way they move is off. It is like they have the frames, but not the frame rate.

It is a shame, as the art style is not so bad. Yeon cited Ghost in the Shell’s Mamoru Oshii and 1996’s Perfect Blue director Satoshi Kon as his inspirations, and it shows in the characters’ looks. They look more grounded and realistic. Each figure looks different to each other, which makes a change from the same-face syndrome other series make. If it had a little more polish, or a little more money, it might have been on par with Kon or Oshii looks-wise. As it is though, it does not hit that mark.

Luckily, the story holds up much better for Seoul Station. It goes for sad than outright terrifying or grossing people out. It paints a sour picture of Korean society, where the homeless are barely tolerated and public servants are unhelpful and selfish. No good deed goes unpunished, and no good person goes without being hurt in one way or another. This cynical outlook does appear to be a theme in Yeon’s work. The King of Pigs scorches the school system in a similar way, as does The Fake with religion.

Flawed protagonists and innocent victims are also common in Yeon’s films. One of the leads in The King of Pigs is a murderer, and The Fake’s lead beats his family. Here, Shim’s Hye-Sun is stranded far from home with only her incompetent, bullying boyfriend keeping her off the streets. It is only when the chaos starts that Joon’s Ki-Woong becomes more likeable, if only because he and Suk-gyu are Hye-sun’s last lifeline. She meets some allies along the way, but her boyfriend and father handle the zombies more effectively. Hope lies in their reuniting, but it is also in short supply as things get worse. 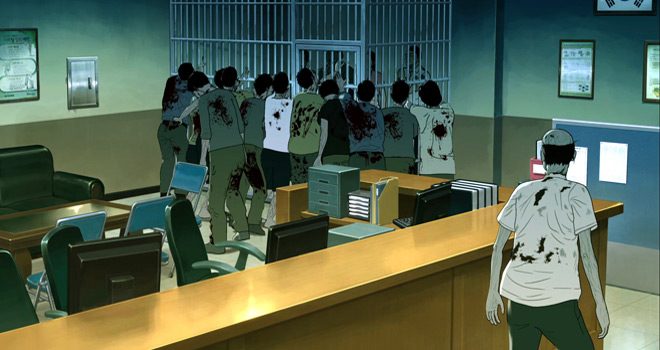 It even answers some questions left over from Train to Busan, but leaves others open-ended. Both films are based on the same outbreak, but they have different characters telling different stories. Though, Train to Busan is perhaps more original. There are not many zombie train stories, and it is done very effectively in that film. This is while Seoul Station is like 2002’s 28 Days Later or 2013’s World War Z with its city-wide outbreak.

Nevertheless, Seoul Station is worth giving a shot. It is a solid, sad story that may be cynical, but it does so without sneering. The animation may falter, and it does not quite beat its live-action predecessor, but it stands well alongside it with its storytelling and characterisation. It does little new, yet it does little wrong. For these reasons, CrypticRock gives Seoul Station 4 out of 5 stars. 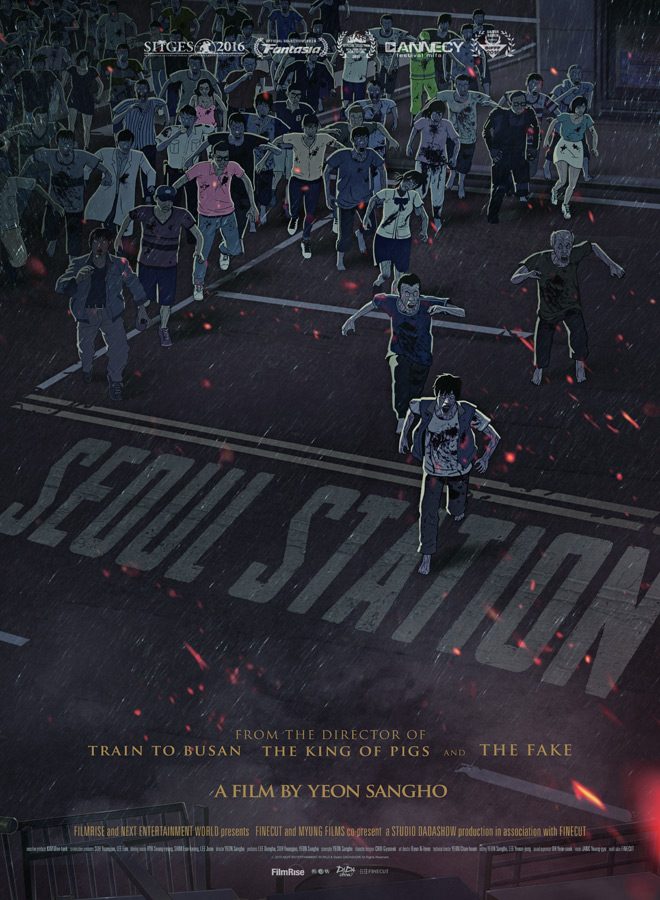 It Came from Below (Movie Review) We Need To Do Something (Movie Review)
Like the in-depth, diverse coverage of Cryptic Rock? Help us in support to keep the magazine going strong for years to come with a small donation.