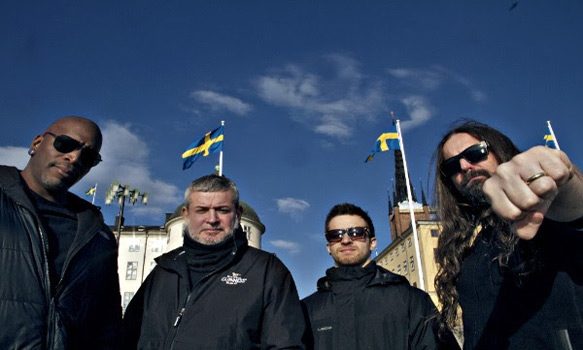 Formed in 1984, in Minas Gerais, Brazil, Sepultura has become one of the most prized, culturally grounded bands in the Metal world. Interestingly, it draws influences from a mélange of styles not usually associated with the genre, in particular Latin and Tribal rhythms and Worldbeat, but also Hardcore, Alternative Rock, and Hip Hop. In its more than thirty years of activity, the Brazilian band has released thirteen studio albums – from the primordial and guttural Death Metal beginnings of 1986’s Morbid Visions, to the relentless Thrash of the ensuing Schizophrenia and 1989’s Beneath the Remains, the cultural expeditions of 1996’s Roots, the ambitious concept of 2006’s Dante XXI, and to 2013’s The Mediator Between Head and Hands Must Be the Heart.

And now, four years after the excitingly dark, Gothic with Hardcore energy of its last album, Sepultura is unleashing another brutal powerhouse. Entitled Machine Messiah, Sepultura’s fourteenth oeuvre is slated to be released on January 13, 2017 via Nuclear Blast. It begins with the eerie and ominous Glam Metal and Gothic Rock–inspired title track, where Vocalist Derrick Green gets to showcase both his baritone and his growls with perverted beauty. Not in the mood for beating around the bush, Green and the rest of Sepultura – longtime members Paul Xisto Pinto Jr (bass) and Andreas Kisser (lead guitar) as well as current drummer Eloy Casagrande – immediately follow this up with the machinegun rhythmic attack of “I Am the Enemy.”

The incursive mood continues with the Mediterranean-flavored Global Metal of “Phantom Self,” owing to the song’s use of the Afro-Brazilian dance rhythm known as Maracatú and the accompanying string arrangement that the Tunisian violin ensemble Myriad Orchestra performed. It will fit well on a playlist that includes “Legend” by Spring and Autumn, “Ornaments of Gold” by Orphaned Land, “Genies, Sorcerers, and Mesopotamian Nights” by Melechesh, “Baptize” by Arthimoth, and “Act of War” by Salem.

That back-to-roots excursion carries on with “Alethea,” which once again combines the cacophony of Thrash and Death with the precision of Latin percussions, resulting in yet another Sepultura ethnic trademark. Then there is the syncopated screeches and gallops of the Grunge-Progressive/Guitar Metal instrumental combo “Iceberg Dances,” which features an interlude of Deep Purple-style jazzy organ acrobatics and Flamenco guitar ad-lib. The initiated may recall Guitar Metal instrumentals like Shotgun Messiah’s “The Explorer,” Joe Satriani’s “Surfing with the Alien,” Gary Hoey’s “Hocus Pocus,” Steve Vai’s “I Would Love To,” and Paul Gilbert’s “Let the Computer Decide” and even Yes’ own Progressive masterpiece “Machine Messiah” (not unlikely a conscious homage).

Then enters the initially slow “Sworn Oath,” returning the listener to the classic Death sound of Sepultura of old, but with a surprising touch of intricate, contemporary Gothic orchestral guitar-synth interplay and unforgiving double-bass blast beats. Vocalist Green is in his best form; his draconian voice wholly envelops the already aurally possessed listener. The adrenaline-charged attack surges onto the ensuing triumvirate of Thrash/Hardcore speed-maniacal “Resistant Parasites,” “Silent Violence,” and “Vandals Nest,” raising the album to its highest power before it finally slows down and wraps up with the Black Metal Tribal sojourn of “Cyber God,” which exudes similar icy, cacophonic and melodic sonic sensibilities of many Viking Metal bands such as Enslaved (“Havenless”), Emperor (“Thus Spake the Nightspirit”), and Bathory (“Valhalla”).

Many die-hard fans had long dismissed Sepultura primarily because of the absence of the founding members Max Cavalera (lead vocals, guitars) and his brother Igor Cavalera (drums, percussion). However, if they really wanted music from the two, then they are free to check out these post-Sepultura works: ten albums by Max’s band, Soulfly; and three releases by the brothers’ outfit, Cavalera Conspiracy. But as far as Sepultura is concerned, its music has long become larger than each of the individual members and even than the sum of all of them.

Moreover, in fairness to the current members of the enduring band, each has really played his respective role and carried the unwavering metallic spirit of Sepultura in his heart, as proven once again by this latest batch of well-conceptualized tracks. Salute to Green, Pinto, Kisser, and Casagrande. CrypticRock gives Machine Messiah 4 out of 5 stars. 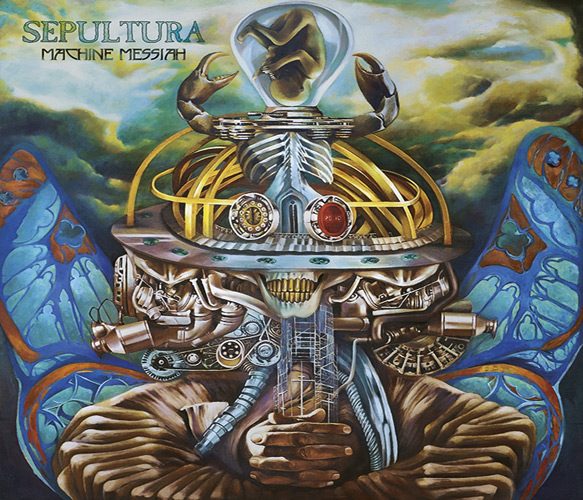