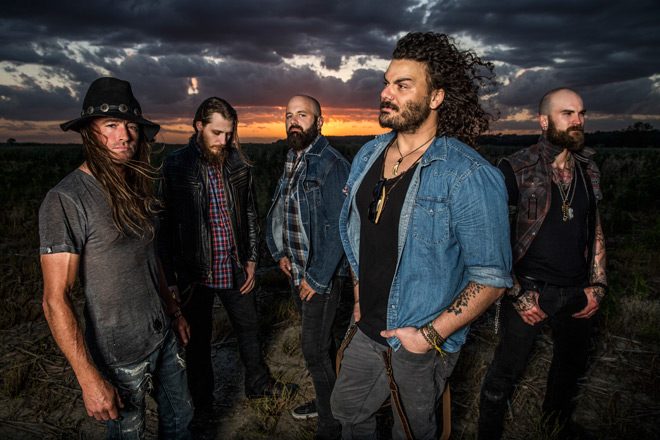 Jefferson City, Missouri’s Shaman’s Harvest are a Hard Rock band that epitomized the term hard work. Originally casting off over twenty years ago, it would take the band some time before attaining the commercial success they deserved when making an impact in Rock charts back in 2009 with the song “Dragonfly.”

A well-deserved breakthrough, a setback hit them during the recording sessions of their 2014 follow-up album, Smokin’ Hearts & Broken Guns, when news came down that Vocalist Nathan “Drake” Hunt had an aggressive throat cancer. While most would postpone or call off work on the music, Hunt steadily stayed the course, splitting time between treatment and laying down vocals in the studio. A testament to pure dedication, that type of drive is what separates Shaman’s Harvest from the pack as they look to take the next step in their journey on Friday, July 28, 2017 with the release of Red Hands Black Deeds via Mascot Records.

Dipping back in the scene, daring and bold all around, Shaman’s Harvest’s sixth overall studio album assures a different sound than the band’s latest creation. Produced by Keith Armstrong (Black Stone Cherry, Rise Against), the title itself is quite deep as the album artwork depicts the beast/animal with solid red behind it. As for that different sound, Hunt rendered that they used various effects, some slightly bizarre, amidst analog effects, vintage amps, and pedals. In addition the singer proposed this album has a more interesting approach to the sound, a “creative path.”

Working with a lineup of Hunt, Bassist Matt Fisher, Rhythm Guitarist Josh Hamler, Lead Guitarist Derek Shipp, and Drummer Adam Zemanek, Shaman’s Harvest produce melodic and heartfelt music with the 12 new tracks kicking off with a Buddhist Om Mani Padme hum-like chant. Putting the listener immediately in a trance, two minutes later,  “Broken One” quickly erupts with some hardcore guitar riffs. With lyrics sticking it to the man, Shaman’s Harvest cooks up a riot. An army that is not backing down, with a variety of sounds throughout the whole song and chorus, Hunt’s voice is filled with deep grunge with a notable pitch that pairs perfectly.

Moving into the single “The Come Up,” they offer a beat that is more of a foot tapper while keeping the mood courageous, bold, and striking. This is in contrast to “ A Longer View” which gradually slows the mood down with a more moderate beat. Vocally softer, yet still somewhat fierce, the song shows more of the empathy of humankind, along with the feelings and emotions surrounding society’s unrest as well as the ignorance that we are all connected/human.

Keeping it heavy, “Soul Crusher” is definitely a track for those who love guitar riffs and solos. Possessing more of a Soul influence to it, the vocals of Hunt have a funky edge. Multi-faceted with various influences mixed in, the song shows the band’s versatility. Bounteous in sound and sass, “Off The Tracks” is expanded in sound, guitar riffs that resonate like thunder highlighted by the deep bass in the background while Hunt hits high note after high note. Then, “Long Way Home” is a tad more gentle and soothing before the vocals hit down the middle before a very enjoyable breakdown. With just music, no lyrics, Shaman’s Harvest offer many less than ordinary sounds here and throughout the album.

Continuously ear-catching, winding it up with a low oboe sound, with what appears to be heavy breathing, static, and psychedelic tones, “The Devil in Our Wake” is sure to be a real treat. This is before “Blood Trophies” brings it in with a atmosphere that has a resonance, gripping listeners’ attention. And through all this, down the middle, the guitar work kills it once more. Nearing the end of the album, “So Long” features riveting drumming that is constant, raging, and headbanging. In addition, the vocals show Hunt has certainly spent much of his time fine tuning his gifts with energy as the song takes off and hits every hook.

This passion is heard further on “Tusk and Bone,” the second to last track, most definitely a potential fan-favorite. With a beat soothing and gentle, Hunt’s voice guides the audience in a sincere fashion. Sprinkled with a savory bass solo, it all comes together as a beautiful melody. Then, closing out the album is the dangerous sounding “Scavengers,” which starts out with echoes filling the verse of a drowsy fuzzy sounding Hunt. Dark and compelling, six minutes of eeriness completes the album in an impressive way.

Lyrics filled with political, social, and economic struggles, Red Hands Black Deeds is an intense album. Leaving no stone unturned, Shaman’s Harvest are back with a Hard Rock album that should reach phenomenal heights. Quieter and more vulnerable, Shaman’s Harvest have planted the seeds of an album that needs to be heard. For these reasons, CrypticRock gives Red Hands Black Deeds 4 out of 5 stars. 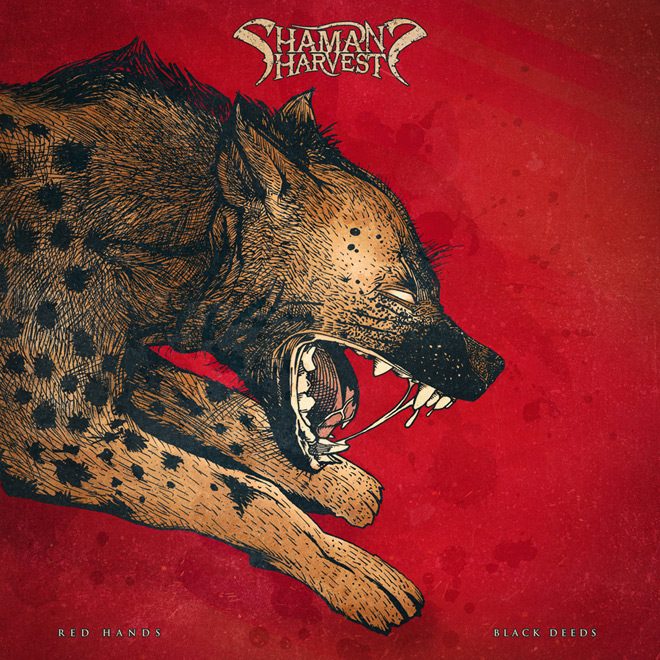 Heavy Water – Red Brick City (Album Review) Black As Night (Movie Review)
Like the in-depth, diverse coverage of Cryptic Rock? Help us in support to keep the magazine going strong for years to come with a small donation.