Shooting For The Moon On Teen Wolf’s 30th Anniversary

“When you’re shooting for the moon and finally make it/ Guess a lucky star is shining on you/ The candle on the cake is yours so take it/ Make another wish, it’s sure to come true/ Isn’t that the way you do it?/ Tell me I can do it too.” Amy Holland’s lyrics for “Shooting for the Moon” from the Teen Wolf soundtrack are the perfect embodiment of the 1985 film’s theme as it celebrates its 30th anniversary. The American Comedy/Fantasy, directed by Rod Daniel (Like Father Like Son 1987, Beethoven’s 2nd 1993) and produced by Mark Levinson (Roadhouse 66 1985, Philadelphia Experiment II 1993) and Scott M. Rosenfelt (Waltz Across Texas 1982, Russkies 1987) from a script written by Jeph Loeb and Matthew Weisman (Commando 1985, Firestorm 1998), was released in the late summer of 1985 on August 23rd. 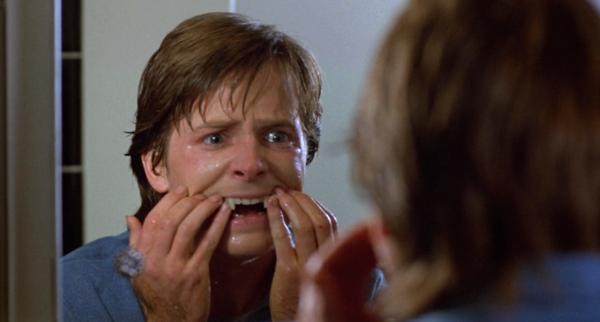 Scott Howard (Michael J. Fox: Back to the Future franchise 1985-1990, Annie 2014) is your average all-American teenage boy. When he’s not going to school or working for his dad, Harold Howard (James Hampton: The Man Who Loved Cat Dancing 1973, The Cat from Outer Space 1978), he is trying to be a basketball jock in an effort to catch the eye of the hottest girl in school, Pamela Wells (Lorie Griffin: Cheerleader Camp 1987, Sandman 1993). Suddenly, a long-hidden family secret makes itself known. How does Scott cope with said secret when he just wants to be accepted?

Teen Wolf came about after the studio took notice of the success of the Jeph Loeb written Valley Girl (1983).  Also, the studio was looking to make a film on a meager budget ($1.2 million) in short order.  After looking at several directors, Loeb and Weisman chose Rod Daniel for the simple reason that he guessed correctly when they asked him what he thought the movie was about. Next, they had to find a leading man.  Michael J. Fox was making a name for himself on the hit TV show, Family Ties, which was on hiatus for his TV mom, Meredith Baxter-Birney’s pregnancy, so he accepted.  The shooting schedule was twenty-one days with the transformation sequence the last to be shot. The schedule gave Fox enough time to do the film and be available when Family Ties reconvened. 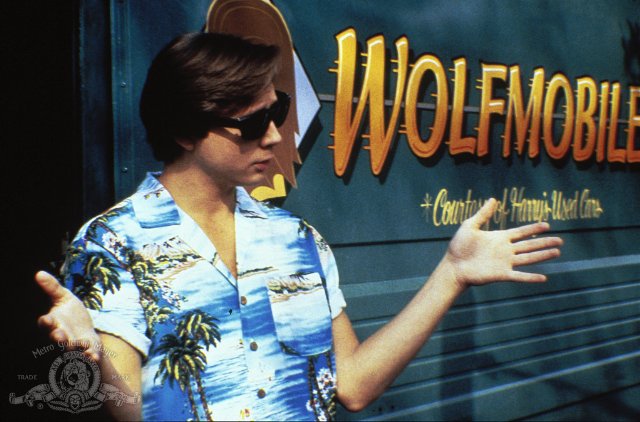 The story had been told before in films like Full Moon High (1981) and I Was a Teenage Werewolf (1957), starring a young Michael Landon, best known for his role as the would-be father figure on TV’s Little House on the Prairie.  However, although Teen Wolf was not the first film of its kind, it modernized the storyline by combining the time-tested problems that have befallen teens throughout the ages with a mood and an atmosphere that were decidedly ’80s. Viewers could relate to Scott, an awkward teen trying to manage school while also attempting to work his way up the social food chain. Meanwhile, Vice Principal Rusty Thorne (Jim McKrell: Annie Hall 1977, Gremlins 1984), has a long-standing vendetta against Scott’s family, and Scott has a complicated relationship with his father, whom he relies on, while also trying to forge his own identity. When the family secret comes out, though, Scott will need his dad’s advice and guidance more than ever. Of course for Scott, more important than anything are girls. He obsesses over getting the most popular girl to take notice of him when his best friend, Boof (Susan Ursitti: Zapped! 1982, The Walking Dead 1995) has been right in front of him all along.

The characters in Teen Wolf are relatable and realistic, even though all of the actors or actresses were older than the kids they were portraying. Jerry Levine, who played Scott’s scheming, F-average, stoner friend, Stiles, and Mark Arnold, who played Mick, Scott’s rival on and off the court, were both the oldest at twenty-seven.  Fox’s 5’4” stature helped him sell the scrawny underdog teen, while Pamela was the unattainable hot girl, snobbishly flipping her hair and rolling her eyes at the peons in great contrast to Boof’s girl-next-door.  Everybody knew these types in high school — especially in the ’80s. 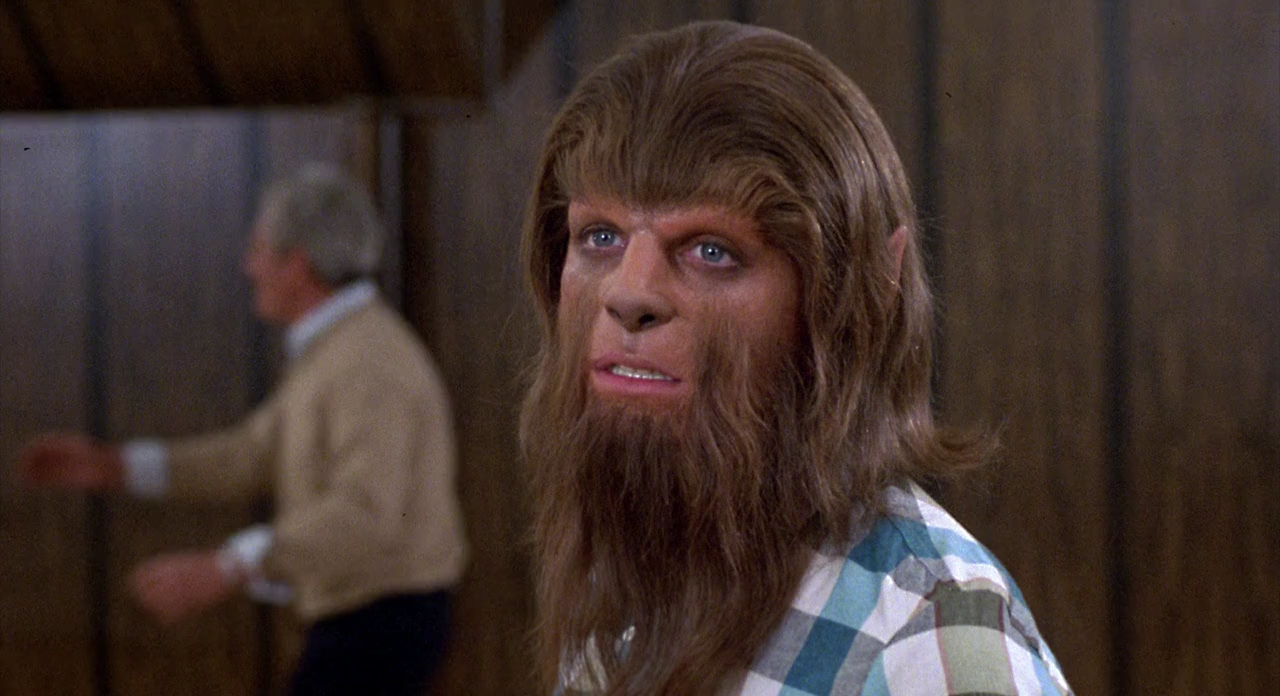 The film was shot on location in South Pasadena, Los Angeles, and Montrose.  Scott’s house and John Burroughs Middle School were reused for Back to the Future.  Those sets, along with the bowling alley and liquor store with the old man (Harvey Vernon: MacArthur 1977, Love is a Gun 1994) casually reading his newspaper, all had that small town look.

At release, Teen Wolf was second only to the Michael J. Fox’s runaway hit, Back to the Future. The former garnered a take of around $80 million worldwide and approximately $33 million domestically, even while it got mixed reviews going head-to-head with the faster paced Back to the Future.  Still, Rotten Tomatoes has it with a 47% “Fresh” rating while Pamela made Cracked.com’s list of “The 7 Best ’80s Movie Girlfriends.”  Furthermore, Jerry Levine says that to this day, he’s recognized as Stiles worldwide, and given Teen Wolf’s success, Teen Wolf: The Cartoon (1986-1989) followed, along with a sequel, Teen Wolf Too, released in 1987 with Jason Bateman (Moving Target 1988, Horrible Bosses 2 2014) as Scott’s cousin.

Teen Wolf’s impact is so great that NFL player Greg White legally changed his name to Stylez White after Stiles in 2008.  Also in 2008, Twilight brought teen werewolves to the big screen with Jacob’s pack acting as the opposing faction to Edward and the other vampires. Even the TV show Family Guy poked fun at Teen Wolf as they stoked the flames of the rumor that as the credits roll, an extra exposes himself, but actually, it was a girl who would unbuttoned her too tight jeans.  For the fan who wants to wear Teen Wolf inspired attire, companies still make shirts like the ones Stiles made in the film.  Finally, in 2011, Teen Wolf: The Series premiered on MTV, albeit, with a darker tone. The wildly popular series shows no indication of fizzling out, and might just carry the beloved Teen Wolf tradition for another thirty years. 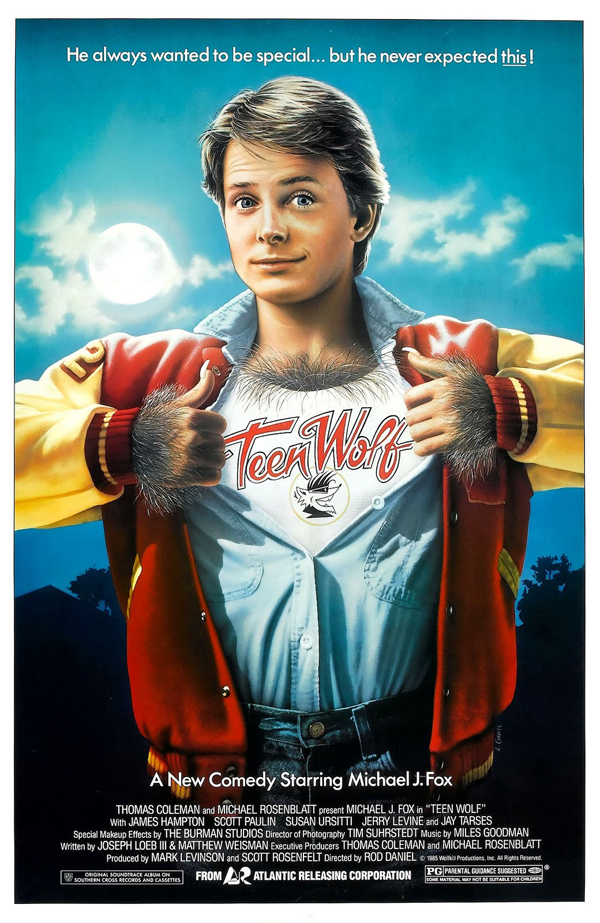