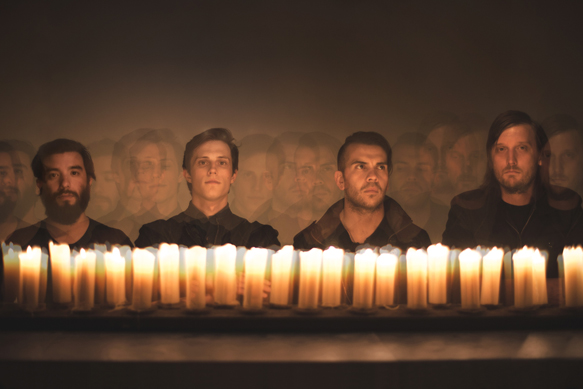 Stepping out of boundaries and comfort zones is something that most artists do not dare veer towards. Formed not too long ago, in 2011, California’s Silver Snakes grabbed hold of their musical influences and jumped headfirst into a journey they would not soon forget. With their first full-length album in 2011, Pictures of a Floating World, members Alex Estrada (vocals), Daniel Pouliot (drums), Jeremiah Bignell (guitars), and Mike Trujillo (bass) worked with producer Steve Choi, of Rx Bandits, to create their first masterpiece as a band. Gaining even more recognition for not only each individual, but for frontman Estrada, who was earlier known for his band Cathedrals. Almost three years later, a new drummer and record label, Silver Snakes released their second  album in 2014, Year Of The Snake, said to be their best yet. As if they could top their sophomore album, not even two years later, dropping their third album via Evil Ink Records entitled, Saboteur.

When writing, Estrada usually steps away from the chaotic city life of Los Angeles and withdraws to the mountains where peace, quiet, and concentration are welcomed. Although, with Saboteur, he reportedly decided to pull back from his ritual and dive right into the mayhem. Thus, Silver Snake brings listeners a not-so concept album about revenge and doing whatever it takes to achieve a goal, and sometimes suffering the consequences that come along with it. The album kicks off with a steady drum beat, some catchy guitar riffs, and the intensity of Estrada’s vocals. The song titled “Electricity” is one of the heavier off the album and definitely showcases what the album is all about. Followed by “Glass,” the track gives off a complete different vibe, almost sinister and unearthly, but with the same potency as the first track.

With more of a laid back feel, “Raindance” comes on with a powerful message that most can definitely relate to. This track is about starting a new point in your life and going with an alternative route only to have your past come back to haunt you. Mostly, the song is about the conflict that one can have with themselves and the struggle that they will face. “Devotion” starts out with the same casual feeling as “Raindance,” but grows heavier, more extreme, and dark as the song progresses. This seven minute song brings an immense amount of emotions through the distortion of the guitar, heavy screams from Estrada, the grueling bass line, and the ominous drum outro.

Changing the tone of the album altogether, “Fire Cloud” comes on with a guitar based interval that breaks away from the ferocity of the first half of the album. Following this track comes “Red Wolf,” which sticks with the same theme and tone of the first four tracks, this song is about directly what the album title states, sabotage. Almost rebellious sounding, “Charmer” kicks in and it is definitely not so charming. With a dependable drum beat and alluring guitar riffs to back up the vocals, the listener is taken to a whole new place filled with destruction. Carrying on with the same energy as “Fire Cloud,” “La Dominadora” starts off with an electronic beat followed by a soft guitar melody, and then adds the vocals. Sounding almost like a second interlude, this track brings the listeners to the last two songs of the album.

Being the longest track of Saboteur, “Dresden” brings the listeners to an almost depressing state and has a very slow build up, unlike most other songs off the album. With a solo from Bignell, one can almost feel the emotions playing through the minds of the members, and an overwhelming sense of melancholy as the track ends with an ongoing drum outro. This brings listeners to the last track of the album, “The Loss” which is a mix of regret, angst, and of course sabotage; ending the album with a Progressive drum and guitar outro.

As a listener, one cannot help but feel a sense of self and delve into their own mind as Saboteur takes them through a guitar riff and lyrically rich packed ten song excursion. Stemming from the roots of bands similar to Nine Inch Nails and Sleep’s Cult, Silver Snakes have come a long way to developing their own unique and distinct style. With taking a huge leap on each album and staying true to always writing what they want, diversity is something you can always guarantee. Whether listeners are into the harder or softer sides of Rock, there is something for everyone on any three of Silver Snakes’ albums. That is why CrypticRock gives Saboteur 4 out of 5 stars. 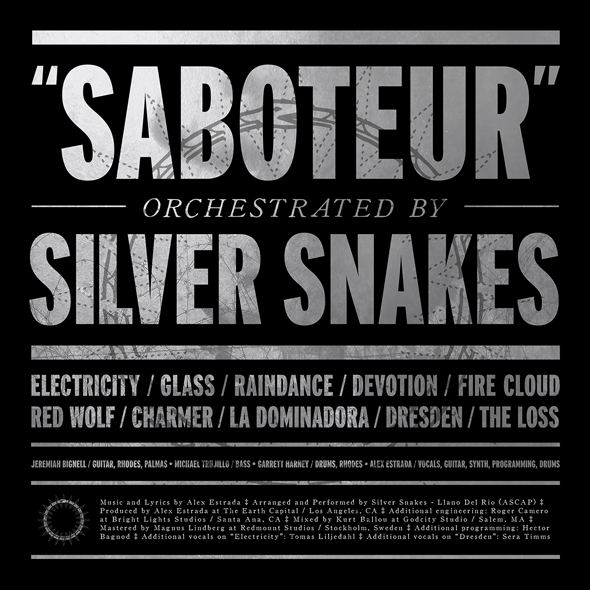