Sin City: A Dame to Kill For (Movie Review)

Sin City: A Dame to Kill For is the long-awaited sequel to Robert Rodriguez’s and Frank Miller’s 2005 supercharged Neo-Noir epic Sin City, based upon Miller’s own comic book series from the 1990s. It was co-directed by Rodriguez (From Dusk Till Dawn 1996, Planet Terror 2007) and Frank Miller (The Spirit 2008). Just like the first film, A Dame to Kill For is divided into four non-chronological segments;  some acting as a prequel to the events in the original film, while others follow up on those events. The segments entitled “A Dame to Kill For” and the considerably shorter pre-credit segment “Just Another Saturday Night” are adapted from Miller’s comics. “The Long Bad Night” and “Nancy’s Last Dance” are original stories written by Miller exclusively for this film. 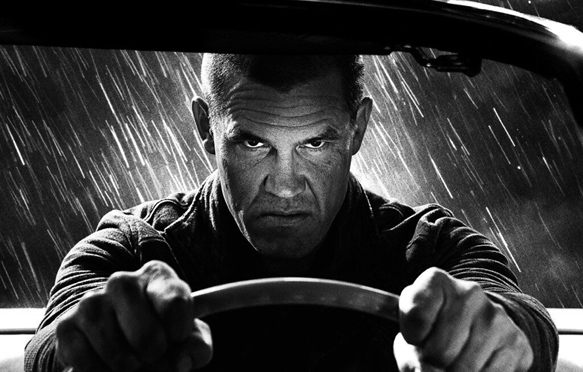 The pre-credit storyline entitled “Just Another Saturday Night” follows Marv (Mickey Rourke- The Wrestler 2008, Iron Man 2 2010), a loner who wakes up in the midst of a car crash in which several young men are dead. This segment involves Marv trying to piece together how he got to where he currently is. He recalls stumbling upon a group of psychotic frat boys attempting to burn a homeless man alive, and begins to recall the events from that point onward. After the opening credits, we are introduced to a young gambler named Johnny (Joseph Gordon-Levitt- Inception 2010, The Dark Knight Rises 2012) in the first half of the segment called “The Long Bad Night.” Johnny runs into one of the villains from the first film; the corrupt Senator Roark (Powers Boothe- Frailty 2001, Tombstone 1993), who is also the most powerful man in the state. Johnny beats Roark at cards. Humiliated by the loss, Roark takes back his money, breaks three of Johnny’s fingers with a pair of pliers, tosses him into his limousine, and kicks Johnny to the curb. It is here where a major plot twist is revealed to the audience. Johnny swears revenge on Roark. The rest of the story picks up after “A Dame to Kill For.”

“A Dame to Kill For” opens up with Dwight McCarthy (Josh Brolin- No Country For Old Men 2007, Planet Terror 2007) saving a young hooker (Juno Temple- The Dark Knight Rises 2012) from an adulterous businessman (Ray Liotta- Goodfellas 1990, Hannibal 2001). Dwight then receives a call from his ex-lover Ava Lord (Eva Green- Casino Royale 2006, Penny Dreadful TV Series 2014-). The two meet at Kadie’s Saloon (a place where a lot of characters visit throughout the various segments). Ava informs Dwight that her husband, the wealthy businessman Damian Lord, along with their chauffeur, Manute (Dennis Haysbert- Heat 1995), often torture and violate her. Ava fears for her life and comes to Dwight out of desperation. Ava is soon tracked down and brought back home by Manute. Dwight sneaks into their estate and is caught watching Ava swim nude. He is roughed up and sent back home, where Ava awaits him. Ava and Dwight make love. Dwight is determined to save Ava from Damian and Manute. He enlists the help of Marv and the two storm the estate. Believing Ava’s story, Dwight kills Damian Lord. Ava soon reveals to Dwight that Damian was innocent and that she has just been made a very wealthy woman from his death. She shoots Dwight and he falls through a window. Marv saves Dwight and brings him to Old Town, where he is recognized by his ex-flame, the prostitute Gail (Rosario Dawson- Death Proof 2007, Clerks II 2006). Gail agrees to help with Dwight’s revenge against Ava. Meanwhile, Ava is playing the same trick on a married detective named Mort (Christopher Meloni- Man of Steel 2013). She tries to convince him that Dwight is a sociopathic murderer who needs to be found and put down. 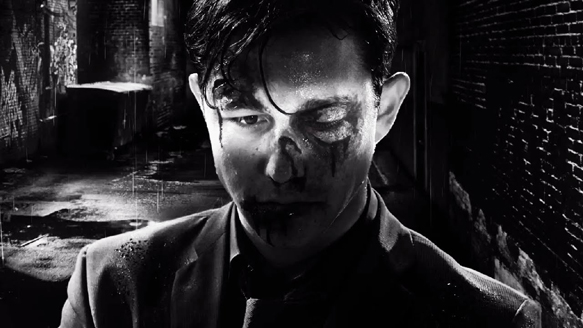 After “A Dame to Kill For” and the second half of “The Long Bad Night,” the film concludes with “Nancy’s Last Dance,” the sequel to the segment from the first film entitled “That Yellow Bastard.” In the original film, Detective John Hartigan (Bruce Willis- Looper 2012, Die Hard 1988) saved the life of a 19-year-old stripper named Nancy Callahan (Jessica Alba- Machete 2010, Fantastic Four 2005) from a serial rapist who was the son of Senator Roark. After killing Roark Jr. and saving Nancy, Hartigan committed suicide so that Roark could not extract revenge for his son by going after Nancy. This storyline follows Nancy in her quest for revenge on Roark. Nancy is drinking heavily, and is frequently visited by Hartigan’s ghost. In a fit of rage, she smashes a mirror and cuts her face. She then stitches her scars together and recruits Marv to help her storm Roark’s mansion.

Although long-awaited, Sin City: A Dame to Kill For was disappointing for most audiences. When Sin City was released in 2005, it was revolutionary. The use of green screen technology to create a living graphic novel on film was something fresh and innovative. It served as the inspiration for a lot of Zack Snyder’s work and has since then become cliche. Sin City remains a landmark comic book adaptation nonetheless. Unfortunately the same cannot be said about A Dame to Kill For. The film is visually stunning, but all that is irrelevant since it lacks the punch and “wow factor” of the original. Even the over-the-top stylized violence became repetitive after awhile. Sin City: A Dame to Kill For may be one of the more disappointing films of the summer.

The challenge is that Rodriguez and Miller waited far too long to make it. The film might have been terrific if it had been released around 2008 or 2009, after Rodriguez had completed his work on Grindhouse (2007). The nine-year-gap is as clear as day in the film.  A considerable amount of stars from the original have been replaced. Michael Clarke Duncan played Manute in the original, and he sadly passed away in 2012. Devon Aoki, who portrayed the sword-wielding Japanese assassin Miho, became pregnant and was replaced by Jaime Chung. Bob (Hartigan’s partner in the original and Mort’s partner in this one) was played by Michael Madsen. In this film, he is played by Jeremy Piven and the two look nothing alike. These glaring differences became distracting after a while, and made the film feel less like an authentic sequel to Sin City and more like Sin City fan fiction. It is not the sequel viewers waited nine long years for. 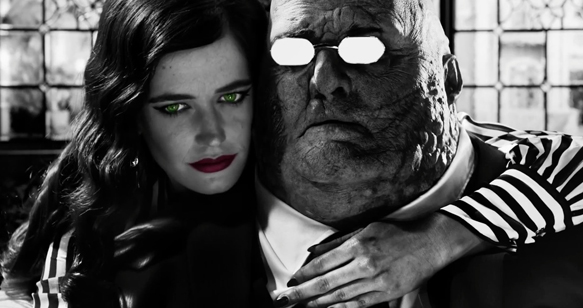 Another unfortunate issue with A Dame to Kill For was the two original storylines. Joseph Gordon-Levitt is great as always in “The Long Bad Night,” but the segment itself ends up being anticlimactic. The only noteworthy part was the scene in which an unlicensed doctor played by Christopher Lloyd (Back to the Future 1985) repairs Johnny’s fingers. It was just neat to see Doc Brown himself playing another crazy character in a new film. “Nancy’s Last Dance” was nothing more than a cliche, by-the-numbers revenge tale. The supernatural element featuring Hartigan’s ghost was careless and random. The scenes of exposition where Hartigan keeps repeating how much he loves Nancy were emotionless. Nancy cutting up her face creates a glaring plot hole in the continuity with the first film. In the original, there is a scene where Nancy is at Marv’s apartment and has no scars on her face. “Nancy’s Last Dance” takes place before the events of “The Hard Goodbye” segment from the original. Miller must have overlooked that, or maybe inaccurately assumed audiences are not smart enough to catch onto things like that.

It is a shame that A Dame to Kill For ended up being such a disappointment. It would have been the perfect way to end the summer blockbuster season, but unfortunately that was not the case. Frank Miller had the opportunity to redeem himself for The Spirit, and Rodriguez could have redeemed himself for Machete Kills (2013). Unfortunately neither of them did so. It is safe to say that both of them have lost it. The only part of A Dame to Kill For which stands out is Eva Green as Ava Lord. She is beautiful, full of energy, and commands the screen with her presence. Aside from her, the film is an ineffective experience. CrypticRock gives Sin City: A Dame to Kill For 2 out of 5 stars. 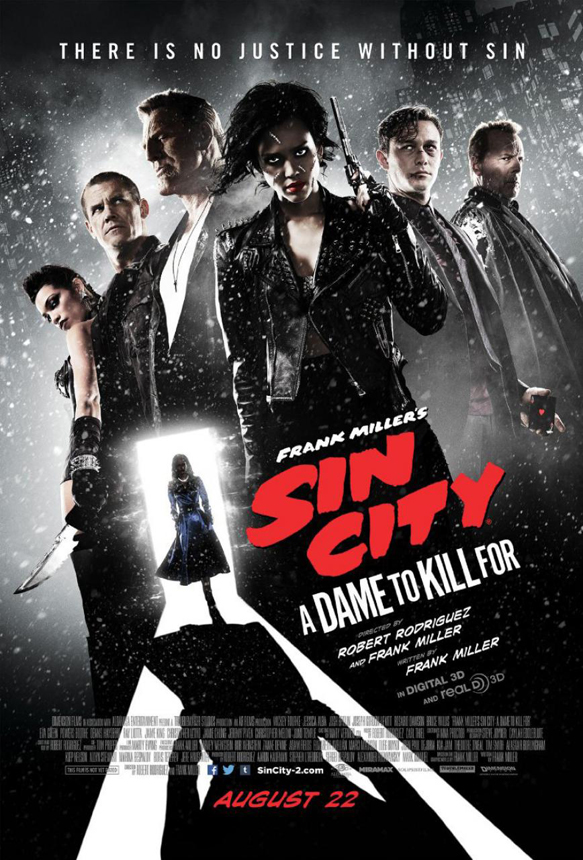 Purchase Sin City: A Dame to Kill For on Blu-Ray on Amazon

Heavy Water – Red Brick City (Album Review)
Like the in-depth, diverse coverage of Cryptic Rock? Help us in support to keep the magazine going strong for years to come with a small donation.