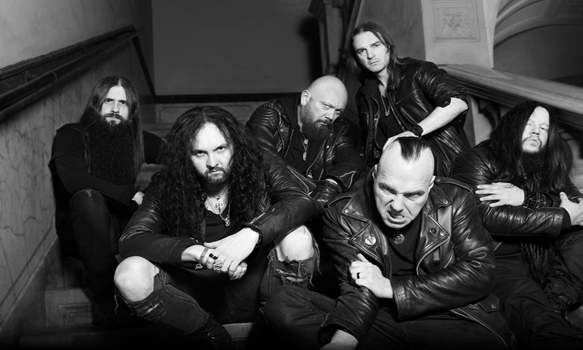 Despite what one thinks of the styling of Dragonforce’s Frédéric Leclercq, the guitarist has grown a hunger for the dark side of Metal over the years, leaning into crafting Black and Death Metal compositions. Pondering the idea for years, it was in 2010 when he teamed up with Loudblast Guitarist Stéphane Buriez to continue working on his original concept. Now in 2016, Leclercq’s monster has been forged in the form of Sinsaenum, an all-star band consisting of Buriez on guitar, ex-Slipknot member Joey Jordison on drums, ex-Dååth member Sean Zatorsky on vocals, Seth’s Heimoth on bass, and former Mayhem member Attila Csihar on vocals. A Extreme Metal lover’s dream, Sinsaenum tempted listeners with the release of two EPS prior to their full-length debut album, Echoes Of The Tortured, which arrived on July 29th, 2016 via EarMUSIC. With the facts in place, does the band live up to their star-studded cast?

Eager to quench listener’s curiosity, the album mysteriously begins with 1920s Horror film score opening “Materialization.” Growing towards more of a modern day, devious interlude with a distorted guitar riff, after the introductory tune, the mood shifts to a brutal and vicious attack on “Splendor And Agony.” Here, there are a few melodic moments, however, it includes multiple amounts of truculent riffs and ferocious drumming before a silent break appears during the halfway mark. Sounds of a sinister ritual lurk as the melody escalates until the vocals scream out with coarse lyrics such as, “I killed you before in my dreams.” Quite intense, an ambient ring fades in during “Excommunicate,” which is another short interlude that resonates a sound from a Horror film.

Like a ride through a haunted house, with surprises at every turn, heaviness returns with “Inverted Cross” as it lashes out with Satanic, blackened vocals. It is a powerful song filled with aggression, anger, and blood-thirsty meaty riffs along with harsh lyrics that includes “worshiping cowards.” Then, another short song, entitled “March,” arrives as it dips down towards a demonic realm while the drums eerily rattle throughout, shifting into the stylistic changes of “Army of Chaos.” Possessing more of a classic Heavy Metal tone, however, the lyrics remain morbid with words such as “we are the sorrow in your soul.” Circling chaotic explosions, it molds into an extreme sound that further showcases torment, torture, and blackened possession with distorted ambiances.

Continuing on the journey, another horrifying and mystified instrumental unfolds with “Redemption,” which includes synthesizing melodies as though one is entrapped within a late ’70s, early ’80s Horror soundtrack. Thereafter, “Dead Souls” enters with a Sludge introduction as it gallops through the emotions of pain and demonic misery with lyrics, “I will seal your fate.” Moving into a deeper and violent track with diabolical guitar hooks and brutal pounds on the drums, evil continues as a vicious growl creeps in during the closing as though it is a chant to awaken the deceased.

Surprisingly soothing, “Lullaby” emerges like an unreleased piece of Goblin’s work from Dario Argento’s 1977 classic Suspiria. This segues flawlessly into “Final Curse,” which holds a verbose tune that rockets into a screaming medley about “victims of creation.” The story moves as though it explains the sad truth of one’s existence and the hell that humanity can bring, including “the curse of man.” Sneaking in and alluring the audience, “Condemned To Suffer” appears to be another interlude, however, it is a full track, only dressed with a mellow introduction. As the tune continues, the retaliation is revealed with destructive instrumentals and a robust guitar solo. Tapping into more eerie sounds, a Science Fiction feeling fades in during “Ritual” before moving more into a Horror-Thriller medley with choir and organ enhancements. In contrast, “Sacrifice” blisters in next with domination as the lyrics scream out “we are the chosen Gods.”

Slowing down the pace once more, “Damnation” puts a unique spin on a ’70s Horror score before chaos ensues with “The Forgotten One.” This is before “Torment” moves in with an unsettling tranquil sound as it slowly grasps to strings that could be displayed in a Vampire flick set in Medieval times. Winding down the record, melody deviates towards a twisted darkness on “Anfang des Albtraumes” as the guitar riffs are at full speed as the vocals rise in remorseless screams. Finding a moment of comfort with the next interlude, “Mist,” brutal and merciless sounds continue in “Echoes Of The Tortured” where the pace kicks off heavily as it drops just before the ruthless vocals ignite. Including one of the strongest guitar solos of the album, it moves into a malicious frenzy up until the end. As the album nears its conclusion, it begins with a hollow sound of “Emptiness.” It is as though death was revealed, leaving only the debris of the aftermath before “Gods of Hell”  fortifies the nightmare.

Playing out much like a soundscape, Sinsaenum’s Echoes of the Tortured has an interesting mix of short interludes and full-length tracks. This style helps keeps a fair balance between the brutal tones and Horror landscapes. A unique method, not easy to pull off since it may hamper the feel of an album, Sinsaenum do a fine job, without sacrificing potencies. CrypticRock gives Echoes Of The Tortured a 4 out of 5 stars. 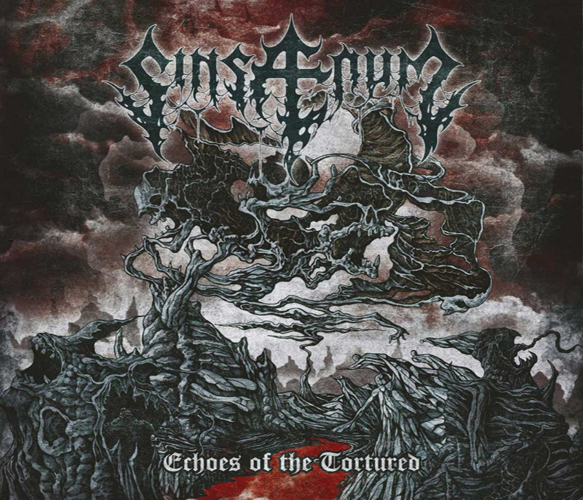