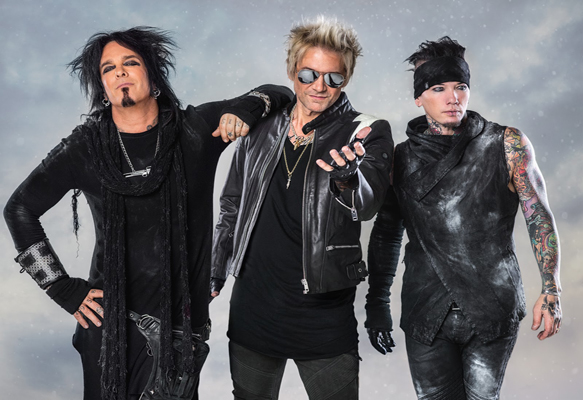 Once considered a side project for Mötley Crüe’s Bassist, Nikki Sixx, Sixx:A.M. in recent years has recently been upgraded to main attraction. Initially launched back in 2007 by Sixx along with DJ Ashba on lead guitar and James Michael on lead vocals to create a soundtrack for Sixx’s autobiography, The Heroin Diaries: A Year in the Life of a Shattered Rock Star, Sixx:A.M.’s The Heroin Diaries Soundtrack was a hit on the Hard Rock scene. With Mötley Crüe still heavily touring, the band would take four years to release their sophomore album, 2011’s This Is Gonna Hurt. Topping charts, the album assured that Sixx:A.M. was more than a novelty, it was destine to be a full-time band. Then, with Mötley Crüe calling it a day upon the conclusion of 2015, Sixx would turn all his attention to Sixx:A.M.

A planned endeavor, it was in July of 2015 Sixx announced Sixx:A.M. would release two albums in 2016, the first, April’s Prayers for the Damned, and seven months later, Prayers for the Blessed, Vol. 2. Released on November 18th via Eleven Seven Music, the album was recorded simultaneously with Prayers for the Damned, marking their fifth overall album. Designed as part of a double album, the body of songs that make up Prayers for the Blessed, Vol. 2 gives the band a chance to explore their musical boundaries and to experiment with their sound a lot more. Freed to be a full-time act, it has taken on new importance and has ascended to a far higher place as a result, with more focus on songwriting, style, and performance than previously, they have had the luxury to invest.

Eleven tracks in total, each have their own character, texture, and statement, showcasing anthems, creating new classic live favorites, and even throwing in a cover everyone can identify with. Commencing with a frantic, rebellious message as a call to the masses to rise up and unite, “Barbarians (Prayers For The Blessed)” is a mantra for current, troubling times. This is before the huge, anthemic, and dynamic “We Will Not Go Quietly.” Acting as the album’s lead single, it is a song with an instant impact with moments of light and shade that give it depth while the guitars provide immense power. Then, “Wolf At Your Door” is a darker, huskier, sexier piece with dramatic drumming and fierce bass lines, underneath it carries a promise to be there when needed.

Full of hopefulness, tenderness, along with a little regret, “Maybe It’s Time” features mammoth harmonies and luscious acoustic strumming, making it the album’s ballad. This is followed by “The Devil’s Coming,” which is relentless and urgent, coming on with fear-inducing guitar riffs symbolizing the desire to escape the inevitable. Under two minutes, “Catacombs” is a musical interlude with a guitar solo that is both short and absorbing. Potentially the biggest track on the album, the sublime “That’s Gonna Leave a Scar” is an attention-grabbing hard-hitter with thunderous drums and an epic-sized chorus.

Including a cover is a risky maneuver and Bad Finger’s “Without You” is one of the all-time classic songs. Well known by many, Sixx:A.M. keep it close to the original, but with echoes of more recent versions still evident. An interesting choice, it is still able to raise a tear and will resonate with those who have lost loved ones. With a few songs left, acoustic guitar and gentle waves of sound break into a full electric production of “Suffocate,” which has drive along with verve combined with eloquence and style. Thereafter, “Riot In My Head” could be a song featured in a theatrical performance. Full with a rise and fall, tons of charisma, charm, and moments of pure brilliance edged with danger, it is a show-stopper. Lastly, “Helicopters” is mysterious as well as hypnotic featuring tambourines and entrancing guitar licks, ending the album on an extremely gratifying high.

If Mötley Crüe was the teen angst and innuendo era for Sixx, then Sixx:A.M. is his maturity and prime years of adulthood, glorious, rich, intense and full of passion and feeling. It is not stuck in a time warp of 1988, but is modern, current, edgy, and youthful. That said, these are not tired old men hanging onto a tattered dream, but powerful, strong and vibrant. The tracks of Prayers for the Blessed, Vol. 2 are now and grabs the listener with both hands, giving them a jolly good shake before marching towards a bright future.

All this said, Prayers for the Blessed, Vol. 2 will appease the Mötley Crüe faithful while attracting a much wider and younger new fan base. A formidable offering that will entice and excite all who hear it, it could be their most complete album to date. CrypticRock gives this album 5 out of 5 stars. 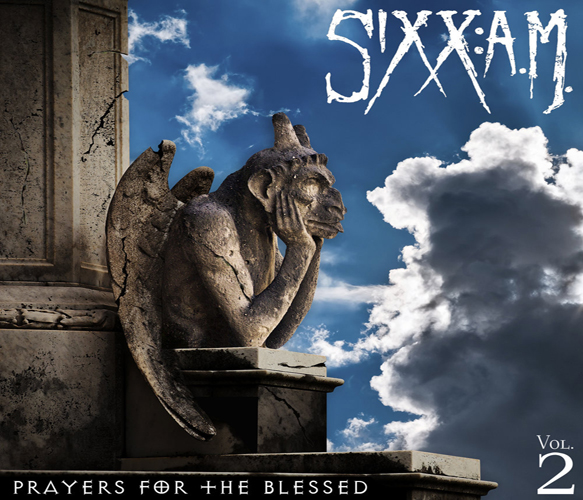