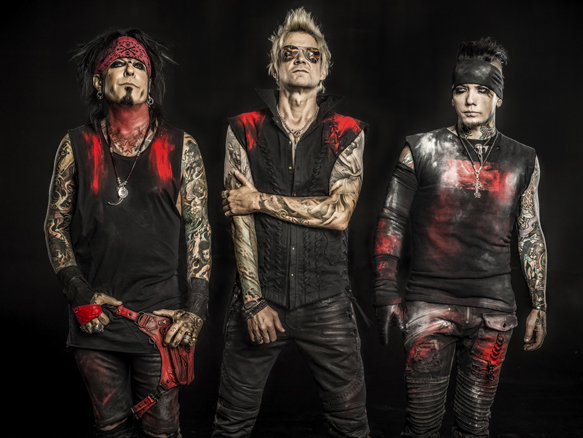 When Nikki Sixx (bass), DJ Ashba (guitars), and James Michael (vocals) came together back in 2007 as Sixx:A.M. to record the soundtrack The Heroin Diaries, it was considered a side project. Little did they know it would soon become a full-time band that would change their lives forever. Topping charts with The Heroin Diaries, Sixx:A.M. followed up with an even more successful record in 2011 entitled This Is Gonna Hurt. Busy with other projects, Sixx of course with Mötley Crüe and Ashba with Guns N’ Roses, four years would go by before Sixx:A.M. would perform on stage together at the Revolver Golden Gods Awards in 2012. This proved to fans that the band was not going away, and, by 2014, they would release their anticipated third album, Modern Vintage. An album which allowed the band, for the first time, to explore every topic lyrically as well as musically, from spirituality to personal issues, there were no limitations, and it showed in the music.

Embarking on the The Modern Vintage Tour in the spring 0f 2015, Sixx:A.M. were blown away by the reaction, truly solidifying this was not just a side project, but something they themselves and fans believed in. With Sixx wrapping up the Mötley Crüe Farewell Tour and Ashba deciding to leave Guns N’ Roses, Sixx:A.M. could now focus 100% of their attention to their music. That led to the announcement, in July of last year, that Sixx:A.M. had plans for two new albums and a world tour in 2016. Exciting news for fans, the first of two albums hits stores as of April 29th, entitling the piece Prayers for the Damned (Vol. 1). Released via Eleven Seven Music Group, the album is the first to feature Drummer Dustin Steinke (formerly of Bleeker Ridge) along with Amber VanBuskirk and Melissa Harding providing backup vocals. Naturally, the talented Michael is back as the producer, thus making Prayers for the Damned Vol. 1 one of the hottest tickets of 2016.  Steinke, VanBuskirk, and Harding all toured with the band on The Modern Vintage Tour and are part of the Sixx:A.M. family.

Cutting right to the chase, the album starts off with radio single “(Rise) Get Yourselves Together.” Featuring a big a capella performance of Michael, VanBuskirk, and Harding singing back in forth, although short lived, it brings about the perfect ear-opening beginning to the album as Ashba provides stunning and sexy guitar solos, while Sixx provides a steady bass background. Then comes “You Have Come to the Right Place” beginning with intense instrumental solos, which quickly turns into a full blown Hard Rock song. With a rocking bass line by Sixx, distorted vocals displayed by Michael midway through the track, and Ashba providing killer solos, everyone will enjoy this song that embraces the idea that in this life we are here to learn from each other.

Moving on, one can not help but notice a little of Mötley Crüe influence in “I’m Sick” where Sixx provides a predominate bass presence with a plethora of Ashba soloing. The song truly shows off Michael’s diverse vocal talents, not to mention the overall powerful instrumental and lyrical content. Then there is the title track off the album, “Prayers for the Damned,” which seems to sum up, lyrically and musically, the concept of good versus evil and the topic of spirituality. In true Rock fashion, the music is full of guitar solos, heavy bass, and drums tracks with a beautiful vocal performance by Michael. In Sixx:A.M. musical terms, “Better Man” could be viewed as a Hard Rock ballad with a message being a better person for one’s self, as well as others.

Picking the mood right back up with thick bass and drum, “Can’t Stop” is driven by killer guitar solos which provide some orchestral background to Michael’s singing, while Harding and VanBuskirk offer delightful vocals during chorus. Sure to be a fan-favorite, “When We Were Gods” is a heavy song featuring Ashba providing some amazing guitar solos that steal the show. This track is very deep, lyrically and musically focusing on the battle between demons and gods. Thereafter is the heavily bass-dominated “Belly of the Beast,” which shows off Sixx’s skills. There is a Punk Rock vibe hidden in the vulnerable and raw musical performance here as Michael provides diverse vocals. A powerful piece, it ends on a high note with the lyrics “What ya do, What ya do, When your living is what you’re doing when you die.”

With the journey of Prayers for the Damned Vol. 1 coming to a close, “Everything Went to Hell” and “The Last Time (My Heart will Ever Hit the Ground)” are both traditional Hard Rock songs. In the listener’s face, both provide some truly amazing drum, bass, guitar soloing, and vocal performances. This leads to the album’s finale, a song called “Rise of the Melancholy Empire.” Begun with haunting soloing piano and guitar with passionate vocals from Michael, it morphs into a harder Rock song by its end. Fitting into the record’s theme, Sixx:A.M. leave their audience with a lasting impression with the words “We will not be damned” echoing.

When three of today’s most diverse and seasoned Rock musicians come together, Sixx:A.M. create something magical and exciting. Prayers for the Damned Vol. 1 allows fans, from start to finish, to feel as though they are not alone when listening to the album. Sixx, Ashba, and Michael have the big band sound, but they always have been a voice for the voiceless and it speaks loudest through this album. With that said, Prayers for the Damned Vol. 1 will have listeners raising their fist in enjoyment while walking away with a sense of empowerment. CrytpicRock gives this album 5 out of 5 stars. 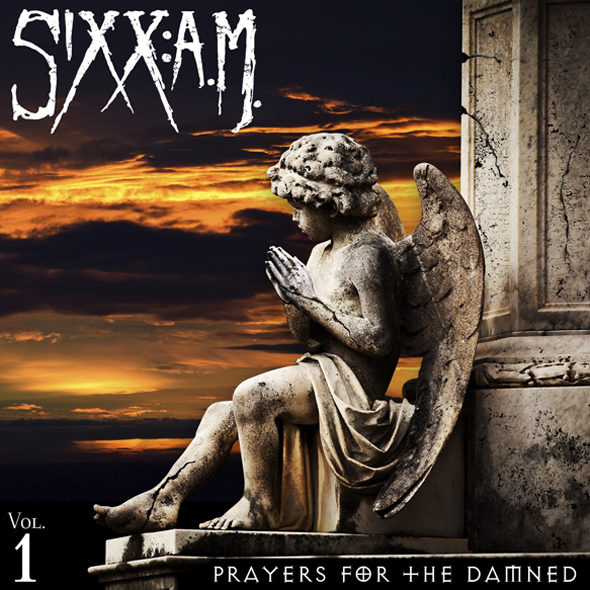