What happens when someone wakes up in a jail cell nude and with no knowledge of why they are there? This is the opening of the UK Indie Horror flick known as Slasher House. Reportedly made on a micro budget of £5,000, the film was written and directed by Mj Dixon (Legacy of Thorn 2014, Cleaver: Rise of the Killer Clown 2015) and features a cast of Eleanor James (Bordello Death Tales 2009, The Horror Vault 3 2010), Adam Dillon (Mycho TV series, Hollower 2015), Wellington Grosvenor, Andrew M. Greenwood (Creepsville 2010, Cleaver: Rise of the Killer Clown 2015), Alex Grimshaw, and the voice of one-time Iron Maiden vocalist Blaze Bayley. Initially released on DVD back in 2013, Slasher House is still getting some attention three years later. 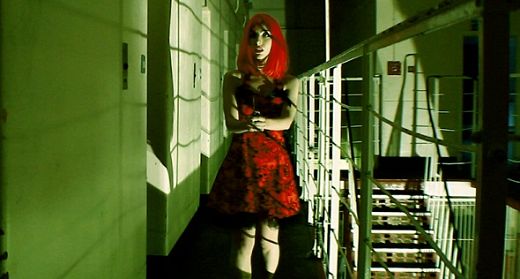 When the main character, with no name at first (James), wakes up nude in a jail cell, she soon finds out she is not alone. She soon finds three other men also in the prison – Nathan Robbins (Dillon), Charlie Corben (Grosvenor), Cleaver (Greenwood), and Thorn (Grimshaw). With a bright red rockabilly dress, hair and lipstick colors to match, it is safe to call the main character Red, but upon wandering around prison, she soon realizes she has no idea who she is. Making allies with what seems like a kind and innocent character in Nathan, the two soon come across the creepy, maniac clown character known as Cleaver.

Dodging the wrath of this murderer, they soon realize that the well-spoken Corben still contained within a jail cell is also a ruthless killer. In the meantime, the character known as Thorn is left to be a mystery until he is also unleashed and appears to be one of super-human strength when he dons a half mask. Red and Nathan fight for their lives as it is kill or be killed until they find a way out of this horrible situation. Who will survive? 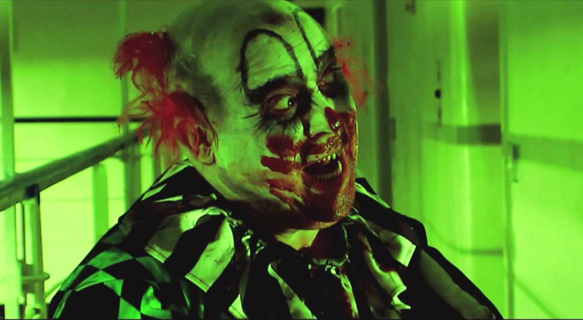 There are many non-linear  flashbacks within Slasher House, giving the viewer a little back story to each and every character. While this is helpful, the overall flow of the film is rather confusing at points and may leave viewers wondering where exactly the story is going. For example, why does the character of Thorn have superhuman strength? Within this, it appears the film is crossing over more into a superhero realm with such a character, which makes the story kind of unbelievable to a point without some explanation. There is also the character of Nathan, who apparently sees demons. So this interjects the idea of possession, thus clouding the direction of the film even more.

Then there is the character of Red, or who viewers soon find out to be really named Felissa Harley. She is no question the hero in the film and main protagonist, but why? There is a little glimpse into why she is who she is, but simply not enough. It is almost as if Dixon created her character with plans to developer her more in future stories perhaps. Those who have paid attention to Dixon’s other work know he already had developed the story of Cleaver more in the 2015 film Cleaver: Rise of the Killer Clown.

Much of Slasher House plays out almost like a Comic Book, and it is an interest story with a lot of potential, just many unanswered questions. As for the actual filming, the cinematography by Dixon is really well done on the budget. The imagery, special effects, and textures are really impressive at times. Those looking for some parallels with other Horror films, imagine Slasher House almost like a Saw concept film with different people thrown together for unknown reasons, fighting for their lives, only the story is a bit more foggy. Dixon has created some interesting characters, and with the money he worked with, it is quite amazing he was able to put this film together. Surely a labor of love, it will be interesting to see where he goes with Slasher House 2 recently meeting its Indiegogo campaign. Hopefully the second film will answer the plethora of questions the first film aroused. Until then, CrypticRock gives Slasher House 2.5 out of 5 stars. 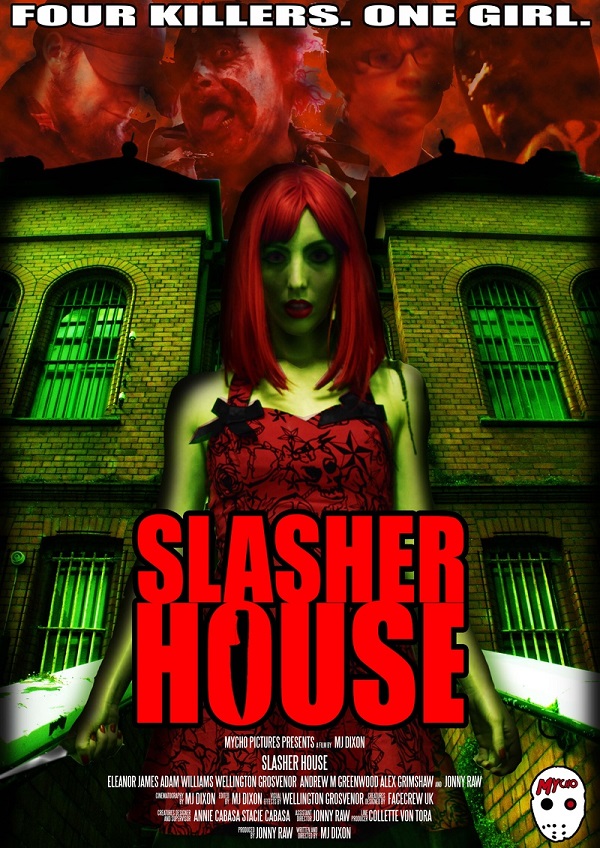