By 1986, the Slasher craze was fizzling out, but that did not stop studios from going back to the almost barren well for material. That in mind, on November 14th of 1986, one of those beloved last ditch effort Slashers, Slaughter High, hit theaters. Starring Caroline Munro (The Spy Who Loved Me 1977, Maniac 1980), Simon Scuddamore (debut and only film), Carmine Iannaccone (Maid To Order 1987, Split Decisions 1988), Donna Yeager (Strong Medicine 1986), Billy Hartman (Highlander 1986, The Bill TV Series 1993), written and directed by George Dugdale (The Living Doll 1990), Mark Ezra (Savage Hearts 1986, House Swap 2010), as well Peter Mackenzie Litten (The Living Doll 1990, Sp FX: Rawhead Rex 1986), Slaughter High received limited theatrical release in the USA through distribution of Vestron Pictures and could be considered one of the last of a generation, thus making it well-worth discussion on its thirtieth anniversary. 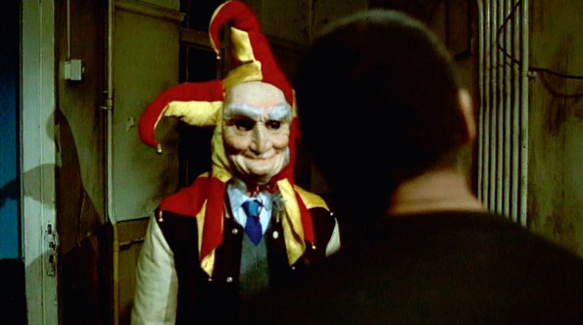 The story begins with Marty Rantzen (Scuddamore), who is having the birthday from hell, which just so happens to be April Fool’s Day. First, he is tricked into getting naked in the girl’s locker room with the promise of sex with his ultimate crush, Carol (Munro), only to be humiliated by her friends. Later, as a false peace offering, Marty is given a joint by Carl (John Segal: Horror Planet 1981, Secret Places 1984) and Ted (Michael Safran: The Ketchup King 2002). Marty goes to the chem lab to mix some trinitrotoluene for a science project.

When he lights up the joint, it explodes and gives him a stomach ache, forcing him to run to the bathroom. Meanwhile, Skip sneaks out of detention and goes to the lab and puts something in the chemical mixture. When Marty gets back to the lab, his mixture starts popping and exploding, which causes the gas hose to come off of the Bunsen burner and start a fire. Marty desperately tries to turn off the gas, but a large bottle of nitric acid falls off a rickety shelf, splashing on him, and causing an explosion. The gang runs to see what happened, unprepared for the damage they caused.

Five years later, the gang is invited to a high school reunion at their old school, but when they all arrive, they find that the school is going to be torn down and that they are the only ones there. Undeterred by the spooky state of things, the gang decides to explore their old haunt not knowing that a murderous Jester is stalking the halls, eager to pick them off, one by one.

Filmed around England, the exterior of Doddsville High was the Holloway Sanatorium in Virginia Water, Surrey, while the interiors were lensed at St. Marylebone Grammar School, Westminster, London. In addition, Carol’s apartment was done in Norfolk Crescent, W2, London. Skip’s car breaks down on the road of Wentworth Golf Club, Virginia Water, Surrey. Other shots were done at London Film Studios, Shepperton, Surrey. 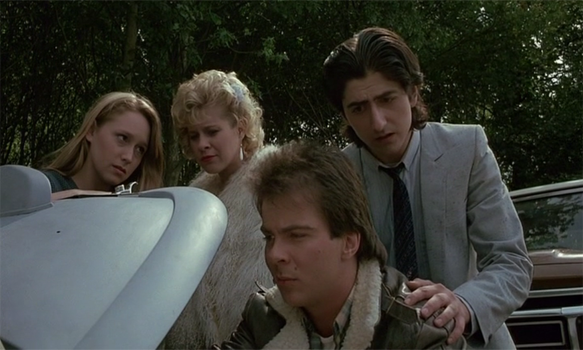 Hampering the film, none of the main characters have any redeeming qualities except (briefly) for Carol, where, at the beginning of the film she has second thoughts about pulling off the prank once Marty reveals that it was his birthday that day, but her friends spur her on and she goes through with it. The gang followed the, by then, established hierarchy: the popular girl (Carol), the Jock (Joe), the bad boy (Frank), the clown (Skip), the slut (Stella), and the background fodder (Carl, Ted, Nancy, and Shirley). They are also none too bright, either. Marty, on the other hand, is a lovable, albeit pitiful, character. He just wants to be one of the cool kids, and handles the initial prank in the locker room with “cool” grace when Ted and Carl give him a joint: “Next time I’m about to score, cool it would ya? I mean Carol really has the hots for me.” He’s an unaware rube, until he is disfigured and almost killed. The set up for his killing spree was pretty elaborate: he had to pipe in the acid through the plumbing into the tub, set up the electro-bed, pick the one specific beer to poison, lockdown the school and electrify the barred windows. These were no small feats, making Marty a fun Slasher villain. Sadly, shortly after production, Simon Scuddamore died of a drug overdose, depriving the world of possible future roles.

Logic takes a backseat in Slaughter High. In fact, it is so far in the back seat, that it is being dragged behind the car down a gravel road, and that is probably why the movie is so damn fun! The gang show up for a high school reunion in the soon to be torn down building, and of all the students in their class, they are the only ones to show up. While they find it a little odd, they do not waste any time breaking in and exploring. Then they happen upon a room set up for a party and items of theirs that went missing years ago along with their old lockers. This still rings no alarm bells because they think it is all Skip’s doing. The best part, though, is when Ted’s stomach explodes (a great special effect supplied by Writer/Director Peter Mackenzie Litten) all over Shirley, and her first thought after running out of the room is not to escape this pit of hell, but to take a bath, which proves to be a little too…corrosive. Eric Polk, a Slaughter High super fan feels, “The Horror scenes are quite brutal from Marty Rantzen’s lab accident to the hilarious bed scene while the humor, purposeful or not, just seals the deal. Overall, Slaughter High hits the beats of a Slasher film without resorting to meta or intentional ground, making this one of my favorite Horror movies of all time.” 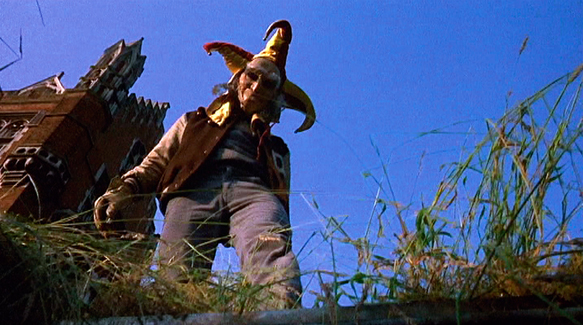 Fortunately for Horror buffs, the film is available on DVD, being released three separate times, once in 2009, again in 2011, and last in 2012. Interestingly, the original theatrical edition’s gore was cut heavily for an R rating, but thankfully the 2009 Lost Collection release offers fans the uncut edition.

As silly as Slaughter High is, it was actually a work of accidental genius that created something that never existed until then: the Anti-Slasher. Through all their attempts to be scary, Dugdale, Ezra, and Litten unknowingly spoofed the entire Slasher genre, though not in a Naked Gun (1988) or Mel Brooks kind of way with obvious references. Thinking back, it is hard to believe at the end of the Slasher boom that Ezra, Litten, and Dugdale were trying very hard to reinvent the Slasher wheel; they were there to cash in while they could. And that is perfectly ok, because with Slaughter High, they still made one awesomely, entertaining Slasher film. 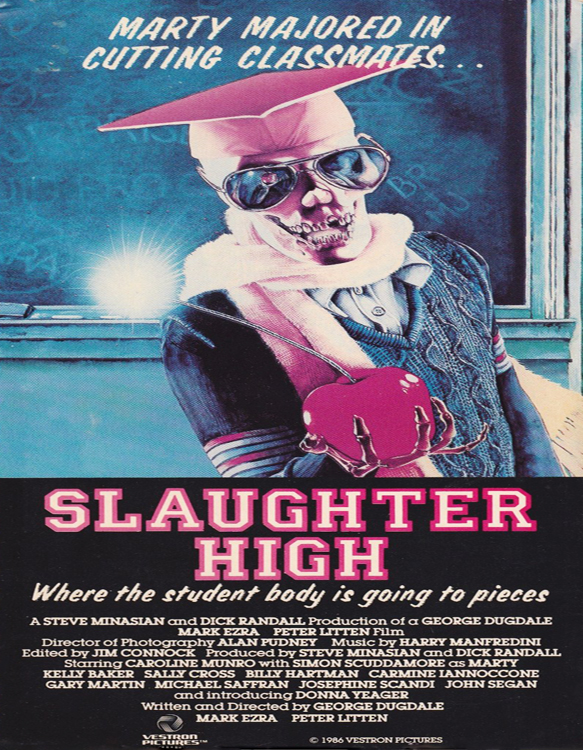