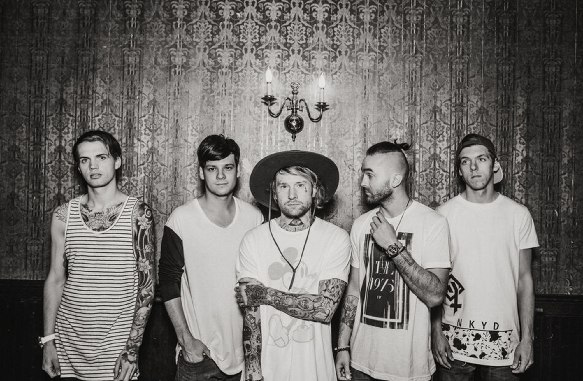 After having two of their bandmates stabbed during a knife fight four days before the start of one of their biggest tours, one would think Slaves would call it quits. Just the opposite. They fought through the trials and tribulations, coming out stronger as a band on the other side. Slaves was formed from the mix and match of different bands in early January 2014. For a man who had a song titled “My Soul Is Empty and Full of White Girls,” Johnny Craig (Emarosa, Dance Gavin Dance, A Sky Lit Drive) has a powerfully soulful voice and uses it as the lead singer for Slaves. The rest of the band consists of Lead Guitarist Alex Lyman (Hearts and Hands), Drummer Tai Wright (Destroy Rebuild Until God Shows), Bassist Colin Viera (Musical Charis), and Rhythm Guitarist Weston Richmond. Their first album, Through Art We Are Equals, was released in 2014 to a decent response. As Slaves and the promo team for their newest album, Routine Breathing, stated, “We don’t give a fuck about our first week sales…and we don’t give a fuck about how many followers we have on the internet, unless these followers love music as much as we love music.” With that bold statement, Routine Breathing was released to the public on September 21st via Artery Recordings.

Their Post-Hardcore sound kicks off the album with “Drowning in My Addiction.” Fast, and dark, both lyrically and in sound, the song deals with not being able to give up something that one knows is bad and how it can be all consuming. Craig’s voice really brings a lot to all the songs on the album and to start the album off with a song that can show his range of both singing to screaming in a singular verse and even sometimes a single line, really captivates a listener to continue on. Moving quickly into a Hardcore version of a ballad, “As the Light Cracks the Foundation” uses a slower tempo while still keeping the strong angry Rock one expects. One thing to be noted is that Craig has stated having a strong love for Soul as well as R&B, and in songs such as this, it is noticeable. “The Hearts of the Broken” is yet another Rock ballad that showcases the band’s strong unity and unique use of a slow bass line but quick rhythm guitar and drum line.

“Burning Our Morals Away” is once again about trying to overcome, move on, and rid one of the negativity in ones life.  “Who Saves The Savior” picks back up the heavy, strong, Rock sound once again with its complicated drum beat, and a large amount of screaming not heard in the previous songs. “Share the Sunshine Young Blood pt. 2,” a song about vengeance, sounds inspired by Lincoln Park, with its mix of Rap and Post-Hardcore Rock. “Death Never Lets Us Say Goodbye” has a religious-like sound with the tolling of the bell throughout the song, and the harmonizing in the chorus.

The album continues with “Running Through The Six With My Soul,” which is Slaves play on the famous Drake song “Know Yourself.” Lyrically and musically not similar at all, but both are decent in their own way. Slaves has a much more powerful message about being with someone who is not who they used to be, hoping they will come back and everything will be better, but knowing it is not going to. “Winter Everywhere” and “One God” are the most ballad sounding tracks one has heard from a band such as Slaves. They start off with a basic guitar strumming as Craig sings. If a listener is an avid fan of Craig, several years ago he sang a cover of Justin Timberlake’s “Cry Me a River.” These songs bring one back to that moment. His voice is the most powerful thing about this song. “Winter Everywhere” grows near the end where the band as a whole begin to chant about how they “want to go back to the days in our car, where we sang the loudest by far.”

“Why Fit In When You Can Stand Out” has a title that empowers a listener. This song is one of those where the musicians are the forefront. Their slick chord changes with speed and precision are heavily felt and acknowledged. Not to say the rest of the album is not their forte, it iss just more heavily focused in this song, which plays into the songs title. Craig has an interesting sense of humor with the titles of some of his songs. Even in previous bands, and even on Slaves previous album, he was known to have some insane titles. This album is not any different. With songs like “Shout Out To All My Toasters;” which is more like an anthem about fighting inner demons, “Is Robbing Your Friends Supposed to be Tight?;” keeping the theme of the album alive with its trying to change, failing, but continuing to try, and “We are So Michelle Branch;” that is more so a ballad about how a good relationship can save two people than about Michelle Branch. The album concludes with “If Only We Could Change,” and it is a good song to end on. It brings together all the feelings and sounds from the whole album to finish with an eerily haunting chant.

Routine Breathing leaves one winded; yes, that just happened. Slaves new album is powerful, head-banging-ly good. When one is not head-banging, the emotion can take its place and deliver a whole new sensation. Whether its joy, pain, sadness, or excitement, Johnny Craig delivers once again. CrypticRock hopes that he found his home in Slaves because Routine Breathing deserves 4.5 out of 5 stars. 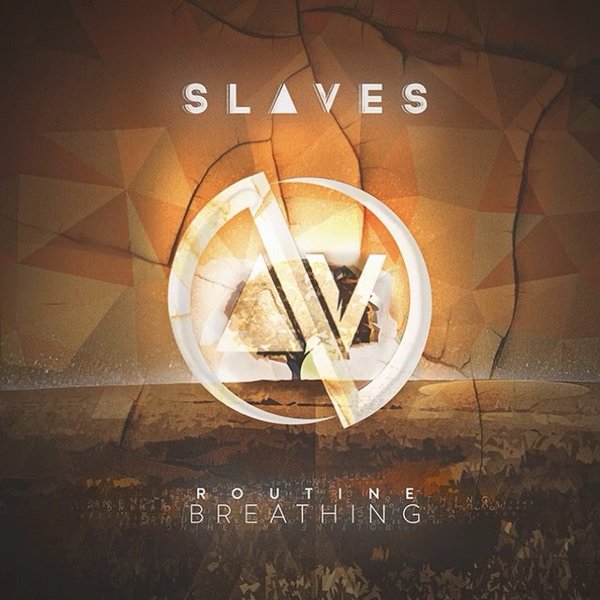