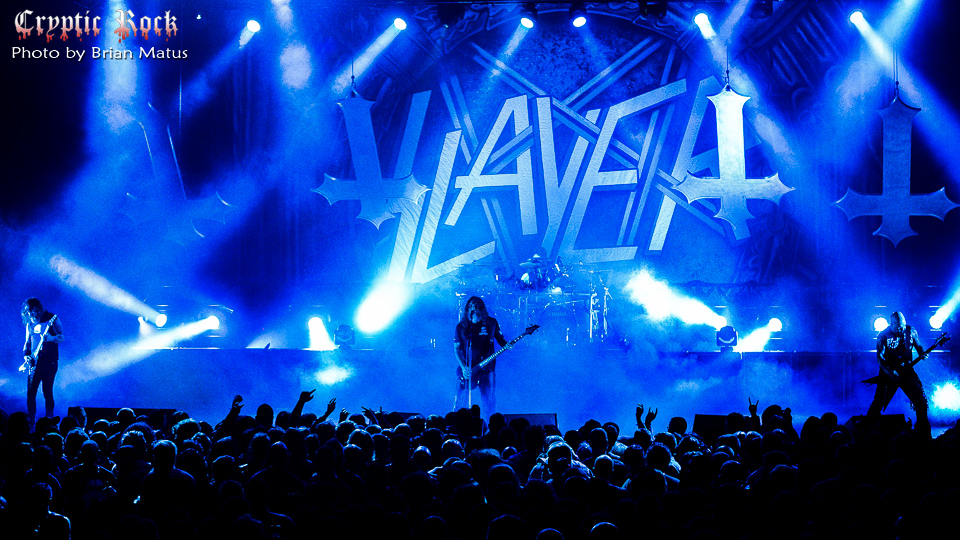 Slayer is one of the most synonymous names in heavy metal for 3 decades now. The band has played some of the most famous arenas worldwide and in the tri-state area of New York. With all their dominance in the metal scene, the band has not played a few venues in sometime. Proclaimed one of the most famous arenas in the world, Madison Square Garden is one of those which Slayer has not visited in 22 years. The last time the band played at Madison Square Garden was back on June 28th in 1991 as part of the Clash of Titans Tour which included Megadeth, Anthrax, and supporting act Alice in Chains. On Thanksgiving Eve, Wednesday November 27th, Slayer ended that long drought playing the theater at Madison Square Garden bringing Gojira and 4ARM along for the ride. A few thousand metal fans gathered to witness the historic event live in the flesh.

Up first were 4ARM from the land down under of Australia. These metallers have been together for nearly a decade consisting of Danny Tomb (vocals and guitars), Michael Vafiotis (drums), Andy Hinterreiter (bass), and James Munro (lead guitar). Landing an opening spot on this tour is a massive step forward for this band deserving of attention. As they took the stage their energetic aggressive sound immediately grabbed the crowd attention. With thrashing guitars and vocal assault by Tomb the fans responded with cheers and horns in the air. The drumming of Vafiotis was something to watch and listen to with his demon speed playing that you couldn’t help but say wow. Their six song set was a constant groove of tracks you couldn’t help but bang your head to. 4ARM take thrash metal into the next millennium with their relentless approach that metal fans will love.

The aggression would not stop there with France’s Gojira next. Gojira is a band which has grown in popularity internationally steadily over the past 5 years since the release of The Way of All Flesh (2008). Going from underground beloved progressive death metal band to a household name to mainstream metal has been a seamless transition for the band with perhaps one of their most diverse records to date in L’enfant Sauvage (2012). Finding themselves as direct support for Slayer is indeed an impressive feat for a band which has even more room to grow.

Looking around the theater you could tell Gojira were not a nameless supporting act to Slayer fans because there was a sea of Gojira t-shirts throughout. As they took the stage with “Explosia” the music hit the crowd like a wall of sound. The attack would rapid fire from that point on with the heart pounding delivery of “The Axe”. Mario Duplantier’s drumming left you beating your chest to the sound of his double bass drum. The band took long time fans back to 2005 with “Backbone” and “The Heaviest Matter of the Universe”. Joe Duplantier’s vocals bleed from the sound system with a sharp clarity you could not ignore. The groove and technique provided by the 4 piece mix so well together their timing is perfectly knitted. Keeping the audience on their toes they played the dark moody tracks “Love” and “Flying Whales”. Duplantier shows his vocal style ranges from aggressive screams to haunting singing at ease. Duplantier humbled by the experience thanked Slayer in between songs for the opportunity to play on the tour. The rhythmical nature that Gojira passes reached its peak toward the end of the sent with “L’Enfant Sauvage”. The track took on a life of its own in a live setting and you were completely enthralled in all that Gojira are. The audience enjoyed each and every offering from the band and Gojira’s energy levels matched their output note for note with a killer performance.

The time had come, the stage was set, and Slayer was ready to show Madison Square Garden what they have missed for the past 2 decades. Many fans have been torn with the idea of Slayer continuing after the passing of founding guitarist Jeff Hanneman earlier this year. It’s never easy for fans to accept a band playing without their favorite members, but Slayer is so beloved by fans that the decision to play on is respected and welcomed. With legendary Exodus guitarist Gary Holt agreeing to continue touring with Slayer and Paul Bostaph returning on drums for the first time in over a decade, Slayer have an impressive line-up of metal musicians to offer their fans.

The bellows of Slayer echoed through the air and “Hell Awaits” began the fire. Tom Araya raged through the track like only he knows how to. The set blasted long-time fans in the face with an array of Slayer history including songs off Hell Awaits (1985), Reign In Blood (1986), South Of Heaven (1988), and Seasons in the Abyss (1990). Kerry King still proves to be a sight to see and hear on stage and it’s no wonder he is a fan favorite. Tracks like “Mandatory Suicide”, “War Ensemble”, “Altar of Sacrifice”, and “Jesus Saves” still possess the same breath taking aggression as they did all those years ago. Fans screamed in excitement through each track and Slayer responded with classics like “Die By The Sword” and “Seasons in the Abyss”. Arraya engaged the crowd arousing immense cheers and he even thanked the “houseowners” of Madison Square Garden for letting Slayer back in the building after all these years. Slayer took full advantage of the opportunity with a large stage show including 3 backdrop changes throughout as well.

As the metal attack continued one thing was clear, Slayer treating fans to all early tunes. The evening felt like 20 years earlier with this set of thrash metal classics. There was even a great nugget in the performance of the 1983 Exodus track “Strike of the Beast”. Holt blistered on lead guitar and shows why Slayer wanted him to stay on as touring guitarist. The set closed out with a triple battery of “Dead Skin Mask”, “Reign In Blood”, and “Black Magic”. Could fans ask for anything more? Well, more they received with an emotional encore. Opening the encore up was a backdrop in tribute to Jeff Hanneman. Emotions were high and the noise level from the crowd was at maximum volume by this point and Slayer played “South of Heaven” and “Angel of Death” honoring Hanneman.

The evening was one for the books. The energy was elevated, the music was furious, and morale was high. With a strong cast of metal bands highlighted by a historic setting, Slayer reigns supreme as metal leaders for yet another year.