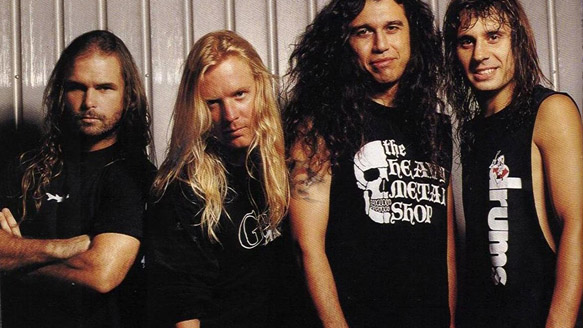 The Californian band Slayer is one of the most demonically grueling Thrash Metal groups of all time. They are part of what is now called The Big Four of American Thrash Metal bands, along with Metallica, Megadeth and Anthrax. Unique from the rest, Slayer’s style is darker and grungier with double bass drumming, fierce guitar riffs, one of a kind scales, and the unforgettable, menacing vocals that leaves listeners cringing appreciatively. Also a signature to their legacy, Slayer has been known to cross into controversial subjects, such as necrophilia, Satanism, serial killers, and even the Antichrist. Such taboo topics has brought about the unfortunate consequence of getting them banned, sued, and album release dates pushed back. Without shame Slayer has dropped themselves into the middle of the religious fire of blame and destruction, along with live performances that leave some terrified, even though, to them, it is all in good old Rock-n-Roll fun.

Formed in 1981 by the late Jeff Hanneman (guitar) and Kerry King (guitar), with Tom Araya (lead singer, bass) and Dave Lombardo (drums) joining shortly after, they were just a group of average Metalheads listening to Judas Priest, Iron Maiden and Venom; perhaps one of the band’s biggest lyrical influences. On the surface, they did not appear to be all that different in comparison to other local Metal acts. However, Metal Blade Records founder Brian Slagel saw something unique and the track “Aggressive Perfector” appeared on the 1983 Metal Massacre III compilation, leading them to sign a contract with the label. With no choice but to self fund an album, Araya combined his own savings with money borrowed from King’s dad, and the boys produced their debut full-length Show No Mercy in 1983 for roughly five thousand dollars. Despite the low budget, the album ended up being Metal Blade’s highest selling record that year, sparking the production of their sinister, intensified, 1985 sophomoric album, Hell Awaits, now bringing Slayer into their legendary status some thirty years ago.

Although some fans believe that it is their third studio album, Reign in Blood (1986), that is their most influential album, especially within the Extreme Metal subgenre, it was Hell Awaits that had paved the way for many bands, such as Behemoth, Pantera, Slipknot and even Weezer. Simply put, the album redefined Metal. It has been stated the late Dimebag Darrell learned how to hit the axe more forcefully based off of this album alone. UK Black Metal band Cradle of Filth covered the track “Hell Awaits” as a tribute and honor. Other bands, such as Sinister and Six Feet Under, have covered other tracks from this album as well, thus proving the strong choke hold it has on Heavy Metal history. Hell Awaits has an imperfect, low budget production quality that adds an ominous element to the music, making the album timeless and untouchable. The longer song arrangements captivate the listener as though they are being welcomed into the gates of Hell. Still young in their career, it could be argued Hell Awaits is Slayer’s most progressive album, incorporating different melodies that spin in an unexpected whirlwind of tempos, leading to a more sinister style of Thrash Metal.

The introductory track, “Hell Awaits,” throws the listener into the abyss with no remorse. It was recorded backwards to make the vocals appear demonic and with an atmospheric tone as though Satan himself was climbing out of the record player. The rhythm picks up the pace and soars into one of the many epic guitar riffs where the melody erupts and the listener is left with pure enjoyment. This track is just the beginning to Lombardo’s impeccable drumming skill set that has been seen throughout his career. Lombardo continues to shine with his double kick pounding on “Kill Again,” driving a strong guitar riff interlude that gets faster, heavier and louder. Along with tension building instrumentation before Araya’s speed vocals, and this is a recipe for pure Metal Bliss. Brutal and gut wrenching, “At Dawn They Sleep” is near perfection, with the combination of aggressive guitar riffs, heart pounding drums and horrific, poetic lyrics which have become extremely influential to many Metal bands.

The theme of darkness continues with “Praise of Death,” defining the sad fact that “we are only living to die.” The symbolism on entering Hell remains evil, chaotic, and terrifying throughout the track. Comparatively, “Necrophiliac,” has a few elements sharing similarity to “Raining Blood” which was not unleashed until the following year, showing that Slayer not only influences other bands, they also influence themselves. The silent, echoey ending of this track is hauntingly breathtaking. “Crypts of Eternity” comes creeping in with a terrifyingly soft intro that quickly picks up the pace and the all around Hell theme, showing elements of inspiration for Pantera’s “Cemetery Gates.” Araya’s vocals are sharp, fast and as heavy as ever with his surprisingly high pitched scream. The final track of the album, “Hardening Of the Arteries,” implores the listener to explore Hell with the band. It is dark and disturbing with some insane guitar solos by King and Hannemann. Lombardo’s work continues to shine, while the guitar and drum combination leads to an ultimately heavy closing to Hell Awaits.

The lyrics on Hell Awaits are truly masterful, eventually shaping the subgenre of modern Extreme Metal. Thirty years have gone by since Hell Awaits was released and it has since opened doors for many bands from around the world. This is no exaggeration, just ask any Metal musician who has come down the pike over the past fifteen years and they will tell you the same. In celebration of this milestone fans should take Hell Awaits out once, give it another listen, and visit a land of pure, horrific imagination. 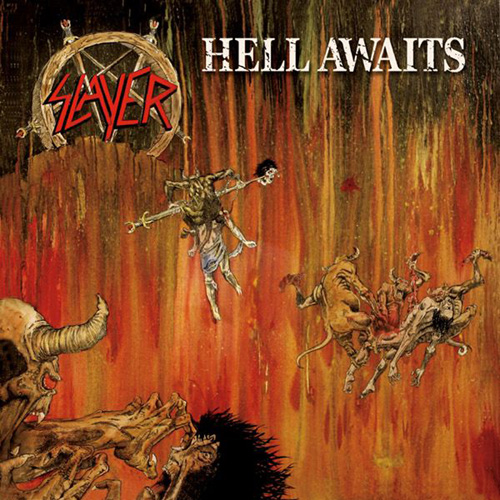