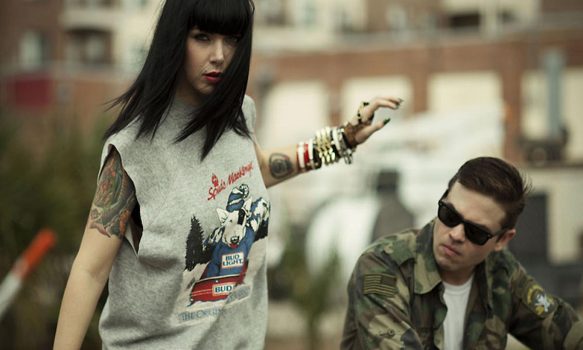 Those that were born under a Pantone sky on a digital storyboard, perhaps the name “Jessica Rabbit” conjures up the visual of a voluptuous cartoon bombshell, clad in red and with luscious auburn locks, parading across a television screen with the largest, ahem, rabbit you ever did see. If this is one’s idea of “Jessica Rabbit,” be prepared to be shocked.

Noise Pop duo Sleigh Bells, comprised of Vocalist Alexis Krauss and Guitarist Derek Miller, were not born in Lapland, but instead hail from the hipster capital of Brooklyn, New York. No stranger to recording and touring, Miller is a Florida native who achieved success with the hardcore band Poison The Well. Departing from the band due to those ever-present “musical differences,” Miller would eventually find himself in Brooklyn in search of a female vocalist. Enter Krauss: a native of New Jersey, Alexis has a more Pop-friendly background, having appeared in a Nickelodeon Magazine commercial as a child, as well as performing with a Pop vocal group as a teen. The twosome met in a park to listen to Miller’s demos and the rest is, well, yes, it is history.

The pair released their debut, full-length album, Treats, in May of 2010, to critical acclaim. Slots performing at the Coachella Valley Music and Arts Festival in 2010 and 2011 and the Pitchfork Music Festival in 2010, among many others, would follow. With the hype surrounding the duo growing, they made their network television debut on Saturday Night Live in February 2012. Follow-up albums 2012’s Reign of Terror and 2013’s Bitter Rivals have managed to bring more fans on board and keep the pair touring.

To date, Sleigh Bells have had massive success with placing their songs, and sometimes even themselves, on television. Their music has been featured on such TV shows as the CW’s teen drama Gossip Girl, the CBS drama The Good Wife, Fox comedy Don’t Trust the B—- in Apartment 23, and the HBO award-winning Girls. They have also had music featured in cellphone commercials, a Dr. Pepper commercial, video games, feature films, and film trailers, as well as a UK Kopparberg Cider advertisement. The duo have even been brought on-screen to perform, as themselves, in the Action-Thriller Premium Rush, as well as appearing with their crew on an episode of Anthony Bourdain: No Reservations. It was a beyond ample amount of exposure for a band that have not yet seen their tenth year together.

Behold the rabbit. The pair’s fourth, full-length studio album, Jessica Rabbit, arrived this November. Throughout the disc, there is a juxtaposition at work in Sleigh Bells’ music between Pop hooks and rhythmic noise, strident guitar riffs, and soothing vocals. Call it what you like – be it Noise Pop, Noise Rock, Dance Punk, digital Hardcore, experimental Pop, or just, simply, Indie Rock – the contradiction of Sleigh Bells’ music creates a phantasmagorical dissonance.

Lead-off single/video and the album’s first track, “It’s Just Us Now,” is the perfect amalgamation of shredding guitars and feminine wiles; a characteristic Sleigh Bells’ track. “I believe deeply in decency (indecency) . . . And when I’m conscious, I am cursed,” confesses Krauss in a seemingly biographical tale of love gone most foul. Unrequited love and relationships of the less-healthy kind are heavily represented topics, weighing in on . . .

“Torn Clean” and “Loyal For” are both – at under two minutes in length – interludes rather than fully-developed tracks. One is whispy, the other equally hypnogogic but with heavier bass lines. “I’m loyal for, I’m loyal for now,” Krauss seemingly smirks in a track that quickly reminds us of the fleeting nature of relationships. In this category, we could also place “I Know Not To Count On You,” a piano-driven track of just over two minutes, containing minimalistic vocals. The title line is, of course, included and another dagger to the heart of human relationships.

The winner for best song title on the album, “Lightning Turns Sawdust Gold” consists of gentle, twinkling piano and synths swirling between Krauss’ passion-filled cries of childhood memories; “I was dreaming of a dead-end street that we used to run down.” It is, metaphorically, a breath of fresh air before the onslaught. The contradiction and beauty of Sleigh Bells is the balance between “Lightning” and tracks such as “I Can’t Stand You Anymore,” where Krauss sings devilish taunts with the voice of a youthful angel. A perfect anthem for the social media generation, “You’re killing me but I’m killing me too” is a harsh truth in our co-dependent world of public lives. It should be noted that “I Can’t Stand You Anymore” is one of two tracks on the album co-written with noted Hip-Hop Producer Mike Elizondo.

Moving on, “Crucible” begins with a scream that launches Krauss and Miller into what amounts to eighties Dance-Pop meets modern EDM; think T’Pau meets Skrillex, produced by Wang Chung or Fine Young Cannibals. The result is as catchy and danceable as the bulk of their music, which – on Jessica Rabbit – has a defined nineteen-eighties New Wave influence. “I Can Only Stare” is a perfect example of this: a classic Pop song that expresses sensuality as both lure and trap for the beloved. “Why won’t you let me come over and do what you want me too?” Krauss’ vocals show her range and power, the passion of her unreturned love.

Fury fueled angst and aggression have Krauss taking no prisoners on “Throw Me Down the Stairs” and “Rule Number One,” each an experimental step over the Pop borderline into Heavy Metal. Altering tempos, heavy noise and feedback, and a clearly enraged vocalist mix together like Pop Rocks and Coke. Which, if the listener believe the lyrics, they will indeed make their head explode. At fourteen tracks in length, there does come a time when Jessica Rabbit lags. She loses her voluptuous, seductive sounds on forgettable tracks such as the Pop meets EBM “Unlimited Dark Paths,” lulling “Hyper Dark,” and the punishing bass/spoken word combination of “As If.” None are altogether bad offerings, just, well, filler.

A track that is all killer and not a drop of filler, “Baptism By Fire,” the second co-written by Elizondo, is a delicious display of the best of Sleigh Bells: catchy lyrics, pixie vocals, and schizophrenic sonical explorations. “When your dream is made of everything you’re afraid of , hold on because you’re the definition of brave,” advises this duo that cannot possibly be pigeon-holed into any one genre: and that is their true brilliance.

Like its femme fatale namesake, Jessica Rabbit is a contradiction of sorts: foxy, yet diaphanous vocals that are often times buried beneath discordant, caterwauling guitars and synthesizers. Deranged and poised, zigzagging and devilish, experimental or just mental, there is no defining these Sleigh Bells. For this reason, and many others, CrypticRock gives Jessica Rabbit 4.5 out of 5 stars. 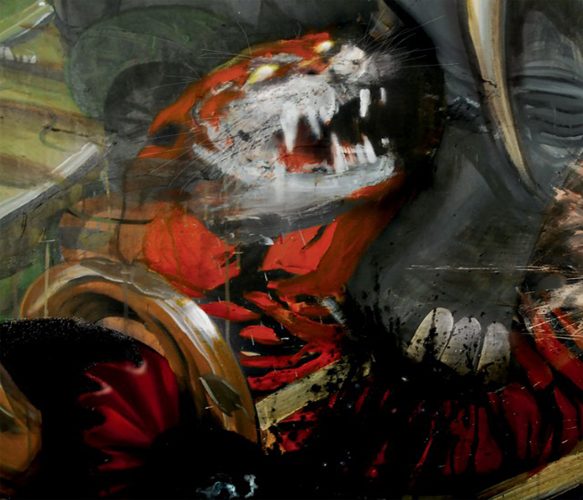