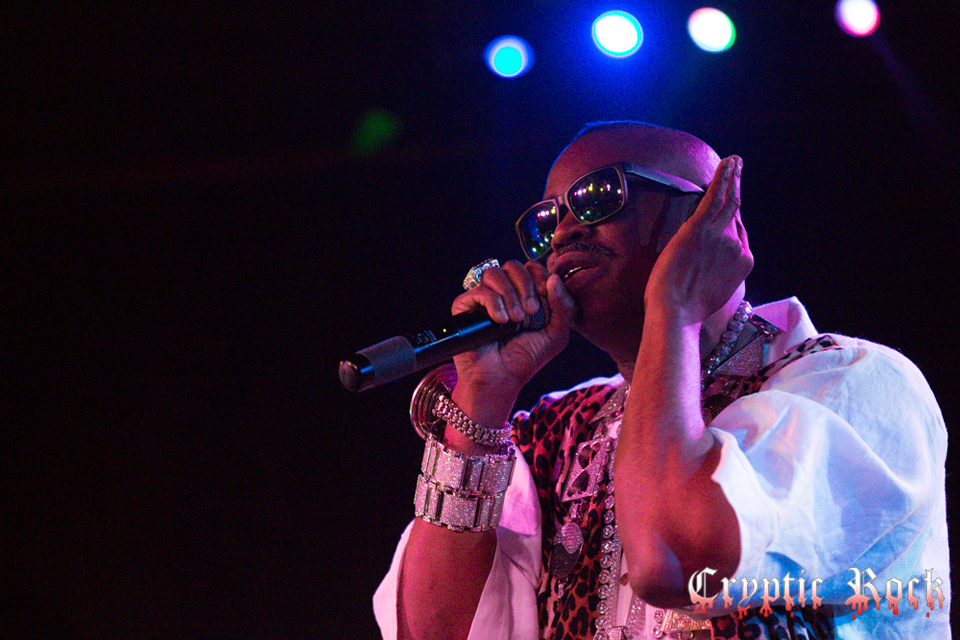 Hip Hop exploded from the streets to speakers of mainstream American in the 1980’s in one of the biggest movements in music in decades.  Among the groundbreaking artists to pave the way for future generations was British-American rapper Slick Rick.  Bursting onto the scene with his debut album The Great Adventures of Slick Rick (1988), the album has been cited as one of the top 100 best rap albums by Source Magazine and one of the most influential albums of all time.  Dubbed hip hop’s greatest story teller, Slick Rick has been rocking mics now for the better part of three decades and takes to the stage once again in 2014 for a series of dates across the USA; bringing the show to Amityville, NY on Friday May 23rd to play Revolution Music Hall.

First to the stage were Central Islip Long Island based four piece hip hop group by the name of Space Runners.  Rhyming together since 2006, Ju$zGlen, Pacer, J. Dope, and T Dot Savage’s style brings an old school flare to their performance.  Very animated and into their groove, each member bounced around the stage with high energy that was exciting to watch.   Space Runners’ creativity displays exactly what modern hip hop needs.

Next up were Uniondale Long Islanders OneTakeCarter.  Taking to the stage with a unique blend of jazz, rock, and of course, an old school hip hop flavor, OneTakeCarter had a sound that electrified the room.  With each passing verse, the poetic elements in their lyrics flowed seamlessly with the cool beats mixed with live guitar.  Their set is more proof that real hip hop still exists in 2014.

Getting the party started for this packed room was DJ Kaos7 mixing a medley of old school hip hop and R & B from the likes of House of Pain, Big Daddy Kane, Run DMC, and more.  With the crowd pumped up, when Slick Rick took to the stage it was like being transported back in time with all the favorite old school jams like “Children’s Story”, “Mona Lisa” and “La Di Da Di”.  Wearing his signature jewelry, Rick Da Ruler’s delivery and emotion was right on with the mood of the room.  Smooth, clarified, and simply fun, Slick Rick had control of Revolution in a big way.  Spinning the classics on the turntable, DJ Kaos7 did a fine job of keeping the momentum going with Slick Rick, and the two united the new and old generation of hip hop fans together on the common ground of unforgettable beats and compelling lyrical stories.  DJ Kaos7 even took to the mix himself with Slick Rick providing some awesome beat boxing that had everyone bopping and smiling as they relived the golden era of hip hop.

Slick Rick is unquestionably a treasure to the pioneers of hip hop music.  While the scene marches to a different beat in 2014, there is still a place in the hearts of dedicated fans for the styling of legends like Slick Rick.  Check him live at a club near you, you will not be disappointed.