Writer/Director James Gunn knows a great movie homage when he sees one. He not only penned the screenplays for the Dawn of the Dead remake in 2004 and the live action Scooby Doo movie in 2002, but also wrote and directed 2010’s Comic Book hero satire, Super. He was also the guy responsible for 2014’s space pirate hit, Guardians of the Galaxy. So realizing he was the man behind Slither should come as no surprise. This fantastic Horror Comedy was released ten years ago on March 31, 2006 and stars Nathan Fillion (Firefly TV series, Castle TV series), Elizabeth Banks (The Hunger Games movie series, Spider-Man 2002) and Michael Rooker (The Walking Dead TV series, Henry: Portrait of a Serial Killer 1986), three talented actors who pulled off the film’s tongue-in-cheek, self-deprecating humor with aplomb. The film was co-produced by Paul Brooks (My Big Fat Greek Wedding 2002, Haunting in Connecticut 2009) and Eric Newman (Dawn of the Dead 2004, The Thing 2011) with a score composed by Rob Zombie’s own Tyler Bates. The gooey, gory creature effects were designed by Emmy award winner Dan Rebert (Six Feet Under TV series, Rose Red TV miniseries) and Todd Masters (Tales from the Crypt TV series, True Blood TV series), a feat that won them a Saturn award for Best Makeup in 2007. 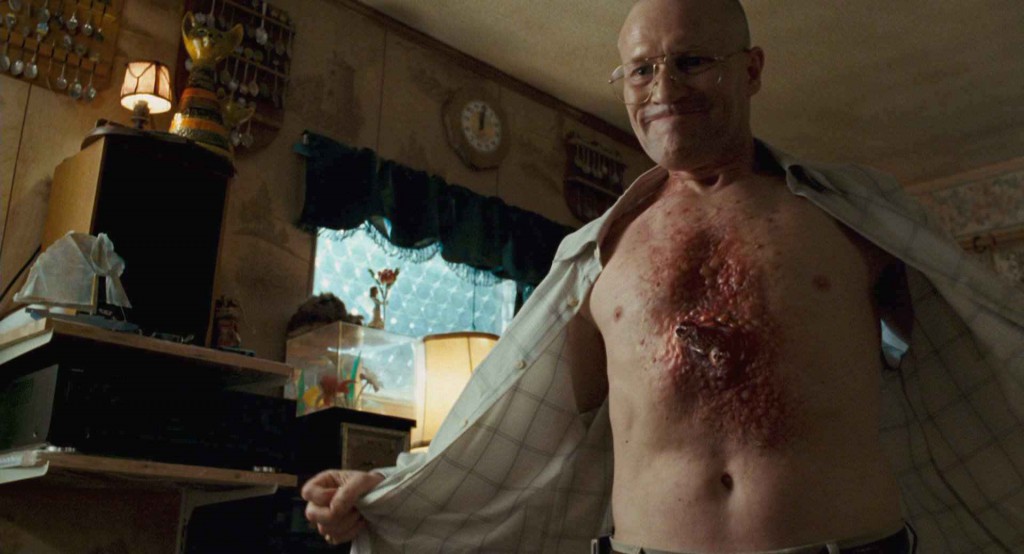 When one hears both “Horror” and “Comedy” in a movie description, it tends to bring to mind an hour and a half of schlocky cheese with a bucket of red corn syrup and a few Horror tropes thrown in to barely cross it over that genre line. Very few filmmakers know how to bring Comedy into a truly scary story, but with Slither, Gunn has done just that. When thousands of those extraterrestrial slugs zip across the ground at lightning speed, ready to dive into any open orifice, one cannot help but snap their mouth closed and cross their legs posthaste. The humor is there, too, as Fillion delivers even the corniest lines with an effortless dry humor that even Steven Wright would be proud of. The over-the-top, yet inventive, creature effects are both disgusting and hilarious, but what else would one expect from a director who cut his teeth at Troma Studios?

In the sleepy town of Wheelsy, South Carolina, a meteorite containing malevolent, slug-like parasites crashes in the woods, just waiting for an ignorant human to find them. Like so many David Cronenberg films before it, it is through sexual frustrations that the trouble starts as the drunk Grant Grant (Rooker) stumbles across the slimy creatures after being spurned by his cute, but well-meaning wife, Starla (Banks), and goes out looking for a quickie with the town floozy, Brenda (Brenda James). Brenda is not the only one getting poked as the phallic tail of one of the slugs shoots out and punches a hole in Grant’s gut. These sperm-like critters turn the previously horny car dealer into an insatiable meat enthusiast, which leads directly to the disappearance of several local pets. This eventually gets Sheriff Bill Pardy (Fillion) involved, a man who will do anything for his childhood crush, Starla. 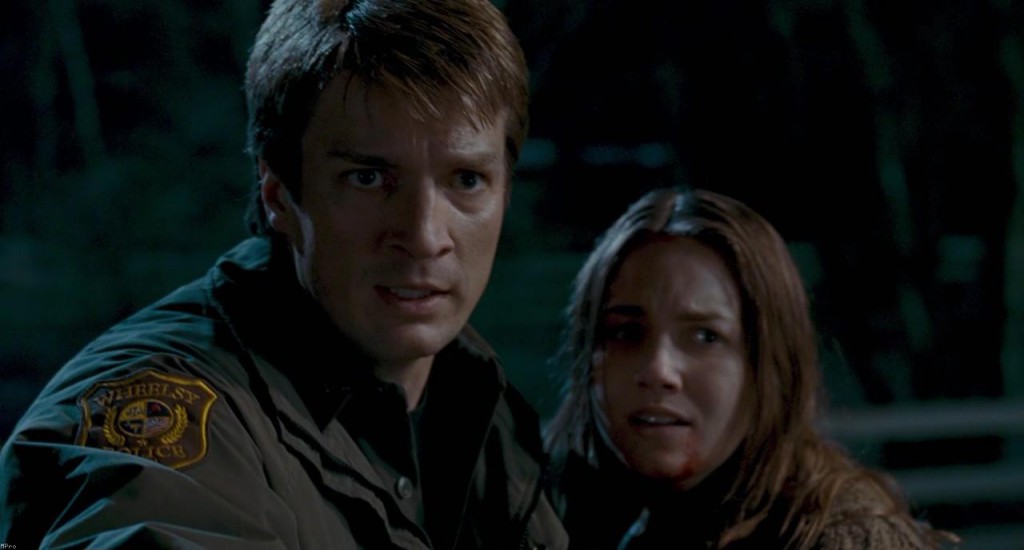 Meanwhile, Grant has impregnated Brenda with his alien offspring and, as soon as Bill and his posse find her, explodes, releasing thousands of baby aliens that immediately infect most of the Sheriff’s crew. The aliens turn them into extensions of Grant, who has by now mutated into a giant, all-encompassing octopus-like creature. As the infection spreads like a rampant STD throughout the town, almost everyone is either infected or absorbed into Grant’s ever expanding mass. It is up to Bill, Starla, and a few remaining townspeople to kill the monster and stop the infection from spreading further.

Not only did Slither bring home a Saturn for Best Make-Up, but the movie was also nominated for Best Horror Film during that same awards ceremony in 2007. In the year of its release, the film also won a Fangoria Chainsaw award for Highest Body Count and was nominated that night for three other awards: Relationship From Hell for Rooker’s Grant and Banks’ Starla, Looks That Kill (Best Make-Up FX) for Masters and Rebert, and Dude You Don’t Want to Mess With (Best Hero) for Fillion’s Sheriff Bill. 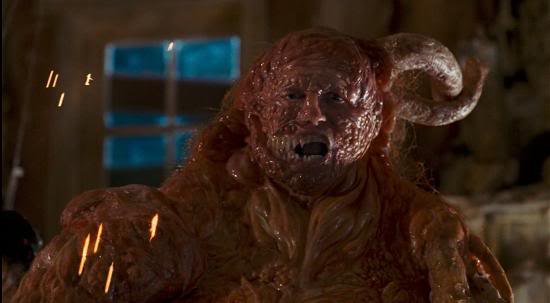 Yes, Slither is campy, but it also goofs on its own genre with a ridiculous, albeit nasty, monster and sneaky one-liners that occasionally slip a little too far into redneck humor, but that is all just a part of its charm. This film is a carefully crafted parody of 1980’s Horror movies with nods to everything from 1987’s Predator, to 1986’s TerrorVision, to 1989’s Puppetmaster, to the quite obvious, 1986’s Night of the Creeps. From the opening credits, the audience knows what they are in for with Slither – buckets of blood, slime, phlegm, and gore getting splattered about with giddy glee leading to a room full of twisted, oozing monster made almost entirely with practical effects. CGI was used, but only to enhance the already glorious drippy, fleshy prosthetics. Of course, no Horror Comedy would be complete without a cheesy Pop song associated with it, and one cannot hear Air Supply’s “You’re Every Woman in the World” without flashing back to that loathsome, vulgar monster’s leering, toothy, shit-eating grin. 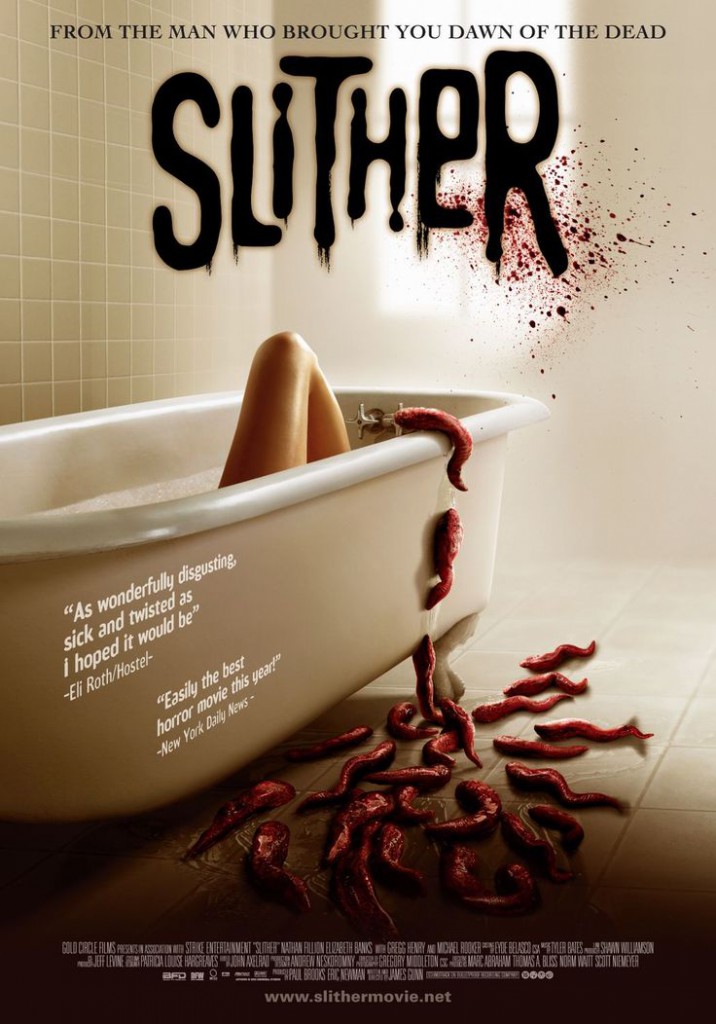 Purchase Slither on DVD on Amazon