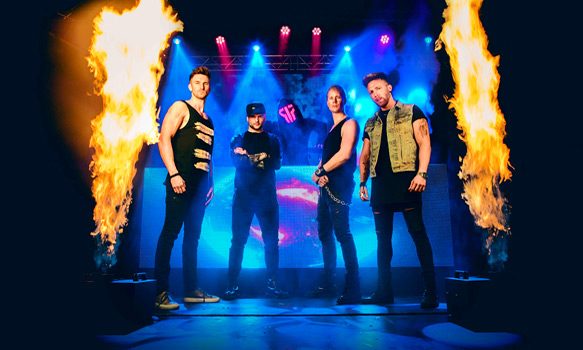 “Anything standing between us and our dreams, we Smash Into Pieces,” chants the Swedish based multiple award-winning Electro Rock act by the same name.

Established back in 2008, they quickly learned about the highs and lows of the music business by signing a record deal and getting dropped after releasing their debut single. Taking a hard road through lawsuits and fighting for their music, Smash Into Pieces was resilient, building a fanbase through extensive touring.

Through it all, it was the music pushing them forward, and in 2012, their hard work paid off when they signed on with Gain Records/Sony Music. Going on to release their album Unbreakable in 2013, which included the hit single “Colder,” they reached number two on the Swedish Rock chart through the biggest radio station in Scandinavia.

Since then,  Smash Into Pieces have cracked a sonicwall of over ten million streams via Spotify since the release of Unbreakable and show no signs of slowing down. Underpinned by several hit singles and chart entries, 2015’s The Apocalypse DJ was another solid step forward for the band.

Two years later, Chris Adam Hedman Sörbye (lead vocals/screams), Benjamin Jennebo (guitar/vocals), Per Bergquist (guitar/vocals), Viktor Vidlund (bass), and The Apocalypse DJ – Sultan Of Swing (Drums) return with their newest collection of songs, entitled Rise And Shine. Hitting the masses on January 27, 2017 via Gain Music, the new album was primed by several live-performances, touring with Amaranthe, and the release of four singles, which are all included on the album.

With this said, it should be clear that Rise And Shine is larded with hits. Comparing to The Apocalypse DJ, around Sörbye and Bergquist, Smash Into Pieces offers a lot more with Pop and Electro garnished Rock soup. Kicking it all off, “Turn It Down” is dominated by synth loops and trudged beats, reminiscent of an electronic version of Nickelback. The track “Let Me Be Your Superhero” is another offering where the song-structure and vocals are in line with the aforementioned Canadian Rock export.

Thereafter, two singles, “Merry Go Round” and “Higher,” are quite catchy, and while a bit too hail-fellow-well-met in their chorus, nonetheless are quite enjoyable to listen to. Most notably, the melody and very special keyboard sound in “Higher” scuffs into the brain in a way some fans could sense as uncomfortable or at least to get used to by listening the first time. This same mixture and experiment comes with the chorus of “Animal” where the band once again mixes Electro Pop sounds with Stadium Rock in their very own unique fashion.

Moving forward, “Stay,” “YOLO,” as well as “Save It for The Living” are carved out of the same wood. Shining with almost perfect chorus lines, with high technical standard on the one hand, these cuts are extremely polished. A bit more rough around the edges, the ballad “In Love with Love“ comes across much more organically, possessing sincere emotion and is a lot less obtrusive to the rest of Rise And Shine. This in mind, the album closes with the title-track, which is the most heavy piece to crack. In contrast to the other nine compositions, Smash Into Pieces tries to balance their more Pop leanings with disharmonic loops and melody lines in a complex song-structure. A danceable groove with harder guitar riffing, it stands out as a must listen.

With Rise And Shine, Smash Into Pieces offer a brave new sound that is somehow totally different to the antecessors. An album that will definitely find its fan base on a wide platform, the very ear-catching tenor of these songs will bring the Swedish band to the next level. Fans of the heavier gait on the other hand will have their fights with this release. In either case, one has to respect Smash Into Pieces for crafting their very own sound of Rock Pop and electronic elements. A delightful listen, CrypticRock gives Rise And Shine 3.5 out of 5 stars. 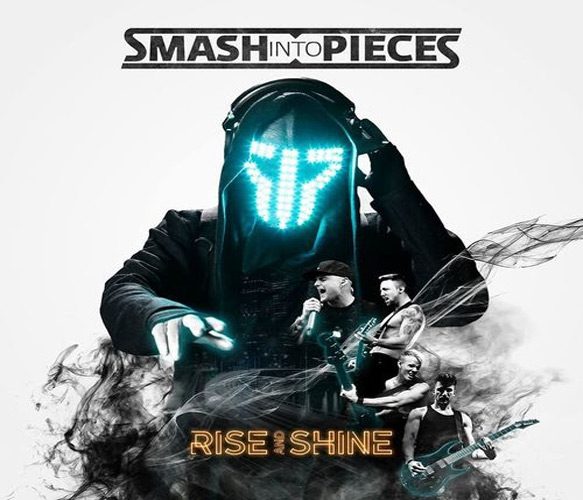 Rise Against – Nowhere Generation (Album Review) Motörhead: The Rise of the Loudest Band in the World (Graphic Novel Review)
Like the in-depth, diverse coverage of Cryptic Rock? Help us in support to keep the magazine going strong for years to come with a small donation.