Snowpiercer is a Post-Apocalyptic Thriller directed by acclaimed Korean filmmaker Bong Joon-ho (The Host 2006). The film is based on the French graphic novel Le Transperceneige by Jacques Lob and is also Bong’s first English-language feature. It was theatrically released in the U.S. on June 27, 2014. Chris Evans (Captain America: The Winter Soldier 2014, The Avengers 2012) leads a multinational cast which includes Kang-ho Song (who had previously worked with Bong on The Host), Jamie Bell (King Kong 2005), Octavia Spencer (The Help 2011), Ewen Bremner (Trainspotting 1996, Black Hawk Down 2001), Tilda Swinton (The Grand Budapest Hotel 2014, Constantine 2005), John Hurt (Hellboy 2004, Alien 1979), and features a brilliant one-scene performance by Ed Harris (The Truman Show 1998, A Beautiful Mind 2001). The terrific ensemble cast combined with Bong’s superb direction make Snowpiercer one of the most unique Action-Thrillers of 2014. 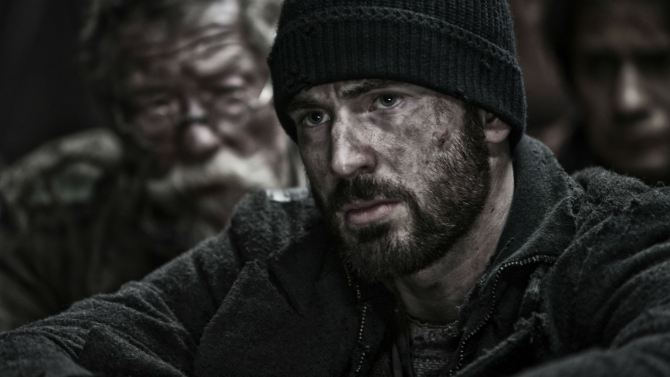 Snowpiercer is set in the year 2031, seventeen years after the entire earth was frozen by a chemical called “CW7,” something which was spread into the upper atmosphere in an effort to combat global warming. Most of humanity died out when the experiment went awry and resulted in a new Ice Age. The only survivors are the individuals who boarded a train called the “Snowpiercer,” which runs on a track that spans the entire globe.  Class systems are installed. The Upper-Class and the powerful board the front of the train where they enjoy exquisite meals and a life of luxury, The Lower-Class are placed in the tail end, where they are faced with harsh conditions and have to eat nothing but protein blocks. All prior rebellions from tail’s inhabitants to seize control of the front and thereby assume power over the entire train have failed. Curtis (Evans) is a man who spent the first seventeen years of his life on Earth, and the last seventeen years on the train. Guards routinely enter the tail to bring the inhabitants protein blocks and take some of the children to the front. An elderly man named Gilliam (Hurt) convinces Curtis to lead the latest rebellion. As soon as the guards enter, Curtis leads the assault on them and discovers that there are no bullets in their guns. These particular guards carry empty guns as a scare tactic; a method of control. 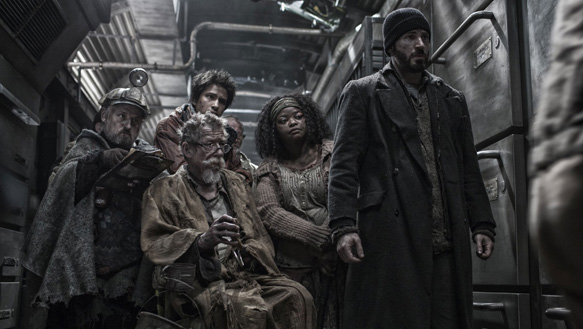 Several train cars down, Curtis frees the Korean prisoner Namgoong Minsu (Song) and his daughter Yona. Namgoong is the man who built the train’s security system. He and his daughter are addicted to a drug called “Kronole,” which is made from industrial coal. Curtis communicates with Namgoong through instant translator devices. He promises Namgoong one block of Kronole for each door he can open. After a battle with armed guards, Curtis takes the sadistic Minister Mason (Swinton) prisoner and forces her to take his band of rebels to the front of the train in the hopes of encountering and overthrowing the Snowpiercer’s creator- a mysterious man named Wilford, who is praised by the Upper-Class as a Godlike figure.

Snowpiercer is a truly unique and enthralling ride from beginning to end. It is visually stunning but also thought-provoking. The film offers an insightful social commentary in addition to its riveting action sequences. Director Bong Joon-ho sets the train traveling through a futuristic frozen wasteland as an allegorical stage for a never-ending real-world conflict; the eternal struggle between the rich and the poor, the haves and the have-nots, the 99% and the 1%, whichever one wishes to call it. His keen attention to this type of subject matter keeps the viewer’s mind from wandering. The setting is compelling and very believable, effectively adding to what Bong was going for. The tail’s inhabitants are covered in dirt and their plight is all-too-convincing, whereas the elite are nicely dressed and know nothing of what it means to suffer from poverty. Realism is a large part of what makes Snowpiercer so effective. 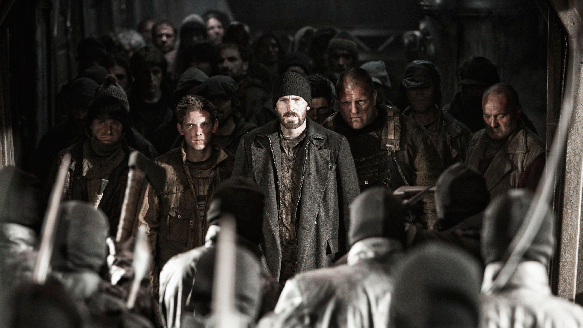 The film delivers on the action front as well as the intellectual and emotional front. Bong is a foreign filmmaker who shows a clear understanding of how the most effective Hollywood blockbusters work. Chris Evans has become a considerably more accomplished actor in recent years. His role as Curtis is possibly his greatest to date. There is one scene in the film in which Curtis informs Namgoong of some of the unspeakable things he was forced to do during his early days in the tail. His monologue is haunting and extremely effective in showing the audience how scarred his character became through the experience. It becomes difficult to see Curtis in a different light after that point in the film, all thanks to Evans’s masterful delivery. A believable and relatable struggle for some weaved into an innovative and refreshing story with an emotional core and astonishing action make Snowpiercer a powerful Thriller which is not to be missed. CrypticRock gives Snowpiercer 5 out of 5 stars. 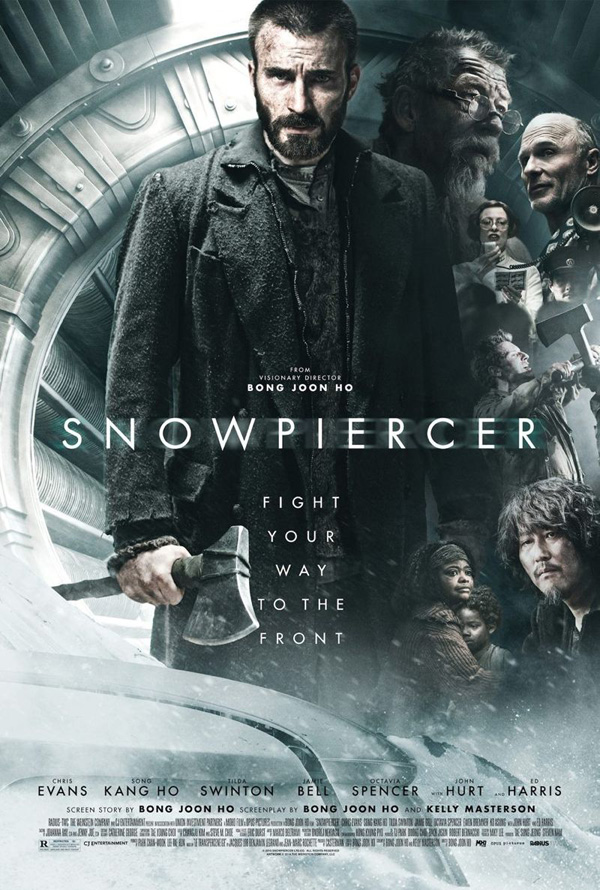 Purchase Snowpiercer on Blu-Ray/DVD on Amazon