American Writer, Producer, Actor, Director, and Comedian Mel Brooks is a national treasure, and at 91, remains one of the funniest men in show business. By 1987, he already made quite an impression as one of the most successful comedic directors with films such as 1968’s The Producers, 1974’s Young Frankenstein and Blazing Saddles. That in mind, it was some time before Brooks would take on Spaceballs, six years to be exact, and the Science Fiction Comedy, a spoof of the Star Wars franchise, and other space genre films of the time, seemed like it might have arrived too late when Return of the Jedi had been released four years prior. Thankfully, America’s appetite for intergalactic subject matter seemed to still be there. That said, when finally released on June 24th of 1987, while not a box office juggernaut, Spaceballs raked in approximately $38 million during its run in the United States, and it remains a comedic masterpiece thirty years later. 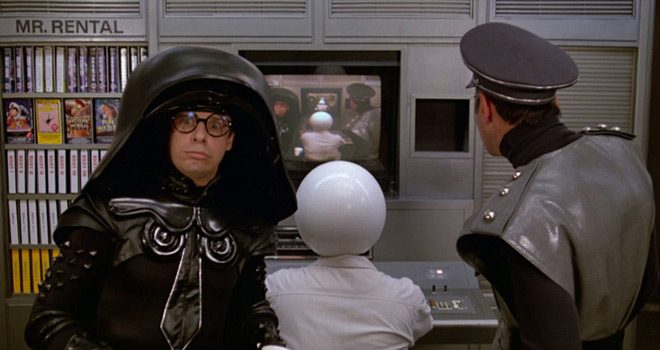 Released a week following Stanley Kubrick’s Full Metal Jacket and days prior to the hit Comedy Dragnet, Spaceballs may not have had a big impact on critics with the overall consensus being split. Although, most critics agreed that while the film was funny, it seemed unnecessary to make a parody ten years after the release of the original film. Yet, there was and continues to be an eagerness for anything Star Wars related and the film has since become a cult classic.

It is a good thing too since Brooks initially did not have any intention of making a space genre spoof. As the story goes, Brooks was about to sit down to eat on the Fox lot in 1984 when a studio executive asked what his next project was going to be. Brooks yelled back, “Planet Moron,” in annoyance and that title ignited the idea to develop what would become Spaceballs. 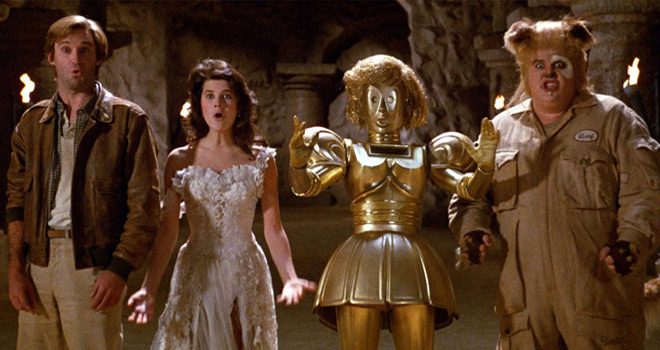 An interesting move, Brooks also cast Bill Pullman (Independence Day 1996, Lost Highway 1997), an unknown at the time, in the lead role. There have been conflicting accounts of how this came to be with Brooks saying he wanted Pullman all along and the studio wanted a Tom, be it Tom Hanks or Tom Cruise, but Pullman remembers things a bit differently. In a 2011 interview, Pullman said that Brooks told him he tried to get either Tom Hanks or Tom Cruise and he could not. After comedians Rick Moranis (Ghostbusters 1994, Honey I Shrunk The Kids 1989) and the late, great John Candy (The Great Outdoors 1988, Uncle Buck 1989) signed on, Brooks could cast an unknown in the lead. Whichever story is correct, even though Pullman never saw Star Wars prior to filming Spaceballs, he was ultimately the best fit.

Along with Bill Pullman as Lone Starr, Rick Moranis as Dark Helmet, John Candy as Barf, and Mel Brooks as the incompetent President Skroob (an anagram for Brooks), the cast also included Daphne Zuniga (The Fly II 1989, Melrose Place series) as Princess Vespa, the late Joan Rivers (The Joan Rivers Show, Fashion Police 2002) as the voice of Princess Vespa’s droid, Dot Matrix, and George Wyner (Fletch 1985, Hill Street Blues series) as Colonel Sandurz. Michael Winslow, of Police Academy fame, also makes an appearance using his sound effects genius, which shaved $1,000 off the film’s budget. Spaceballs, which takes place on the air depleted Planet Spaceball, begins its ridiculous premise with leader President Skroob ordering the evil Dark Helmet to kidnap Princess Vespa of the oxygen-rich Druidia and hold her hostage in exchange for air. But, when Vespa flees her wedding to the narcoleptic Prince Valium and finds her spaceship being beamed up by Spaceball One, she is rescued by mercenary Lone Starr and his half-man, half-dog sidekick, Barf. 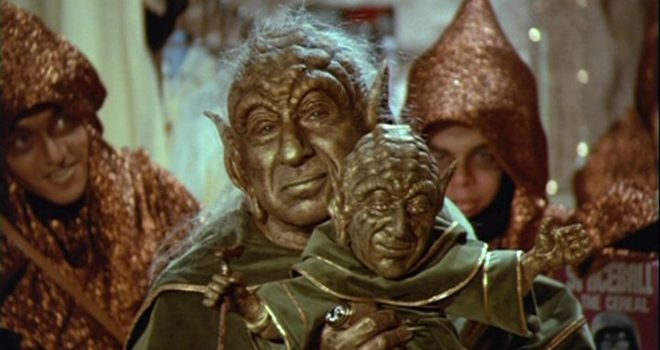 All this in mind, Spaceball’s absurd storyline provided ample material for jokes and one-liners. It is these moments that have defined the film and made it so memorable. When Lone Starr must crash land on the nearby “desert moon of Vega,” he and Barf are left carrying Princess Vespa’s luggage, which is just a case for her insanely large hair-dryer. Eventually found by a group of red-clad aliens called the Dinks, Lone Starr, Vespa, Dot, and Barf are taken to Yogurt, Spaceballs’ version of Yoda. It is here that viewers, along with Lone Starr, learn about the Schwartz, similar to the Force. Spaceballs goes meta and breaks the fourth wall when Helmet and Spaceball One captain, Colonel Sandurz, use a VHS copy of the film to find Vespa’s location.

Furthermore, one cannot think of Spaceballs without thinking of those moments or when Dark Helmet gives out an order to “comb the desert” and the next thing they see is a literal combing of the desert, or King Harold and President Skroob’s idiotic “1-2-3-4-5” combination, and finally when the Spaceball One ship transforms into Mega Maid, a gigantic maid holding a vacuum to suck the air from Druida. When Lone Starr figures out a way to reverse the sucking of air from Druidia, who can forget the line, “She’s gone from suck to blow!”? And then, there is John Hurt’s cameo as we see a cute-ish alien burst out of his stomach to sing the Tin Pan Alley song, “Hello! Ma Baby.” 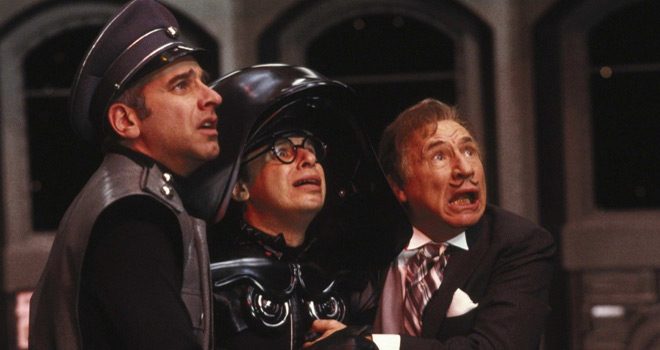 Nonstop laughs, Spaceballs takes advantage of exploiting the Science Fiction genre for its comedic benefit. It is successful and holds up 30 years after its release because it encapsulates all of the elements of the space genre formula. It helps that moviegoers are still running to the theater to see new Star Wars films, but at the end of the day, the film is belly-laughing fun and easy enough to find on TV or to rent, so those who have not ventured into the world of Spaceballs, now is as good a time as any. So, until Spaceballs 2: The Search for More Money becomes a reality, may the Schwartz be with you! 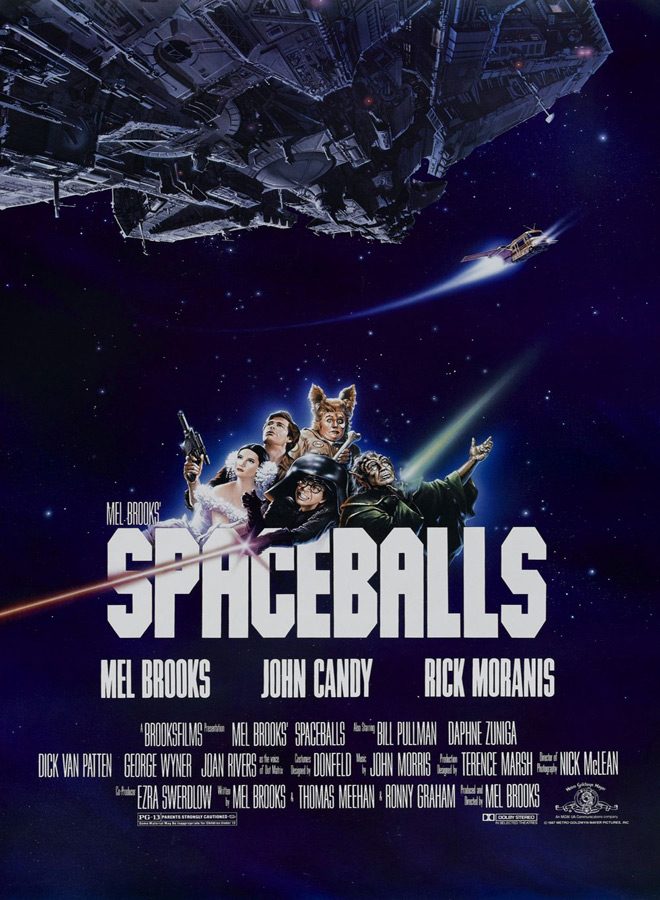